Adobe’s mobile apps are spread across multiple ‘families,’ but each is available as an individual download from the app store. This means you can pick and choose which applications you want, as opposed to being forced to download the entire suite and potentially get saddled with applications you don’t actually use. 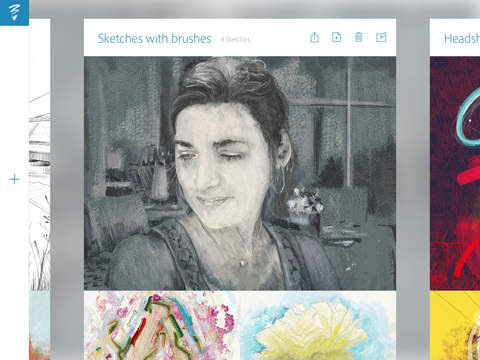 New additions include Photoshop Sketch (pictured above), which brings new brushes as well as custom brushes, and the ability to send sketches to Photoshop as a PSD file. There’s also Illustrator Draw for the creation of vector illustrations (users of Adobe Ideas will be right at home with this one) as well as Adobe Premier Clip, which facilitates mobile video editing. Adobe Colour CC is a rebranding of Adobe Kuler, while Shape allows turns photos into editable vectors (tying into Illustrator CC and Illustrator Draw).