VinFast, a new automaker that first appeared in 2017, is finally ready to show the world what it’s made of.

I briefly went hands-on with the VF8, the model that’s coming to Canada, hopefully, at the start of 2023, and I walked away impressed with the vehicle. From the display booth to the demos, there was a lot of VinFast to see at the New York Auto Show.

There are three cars in the company’s lineup so far: the VF9 reminds me of a Toyota forerunner; the VF7, which is still closer to the prototype or concept stage than the release; and finally, there’s the VF8, a modern crossover.

VinFast says the VF8 and VF9 launch in Vietnam in May, the U.S. in the fall/winter and likely Canada at the end of the year or the start of 2023.

Where did this company come from? 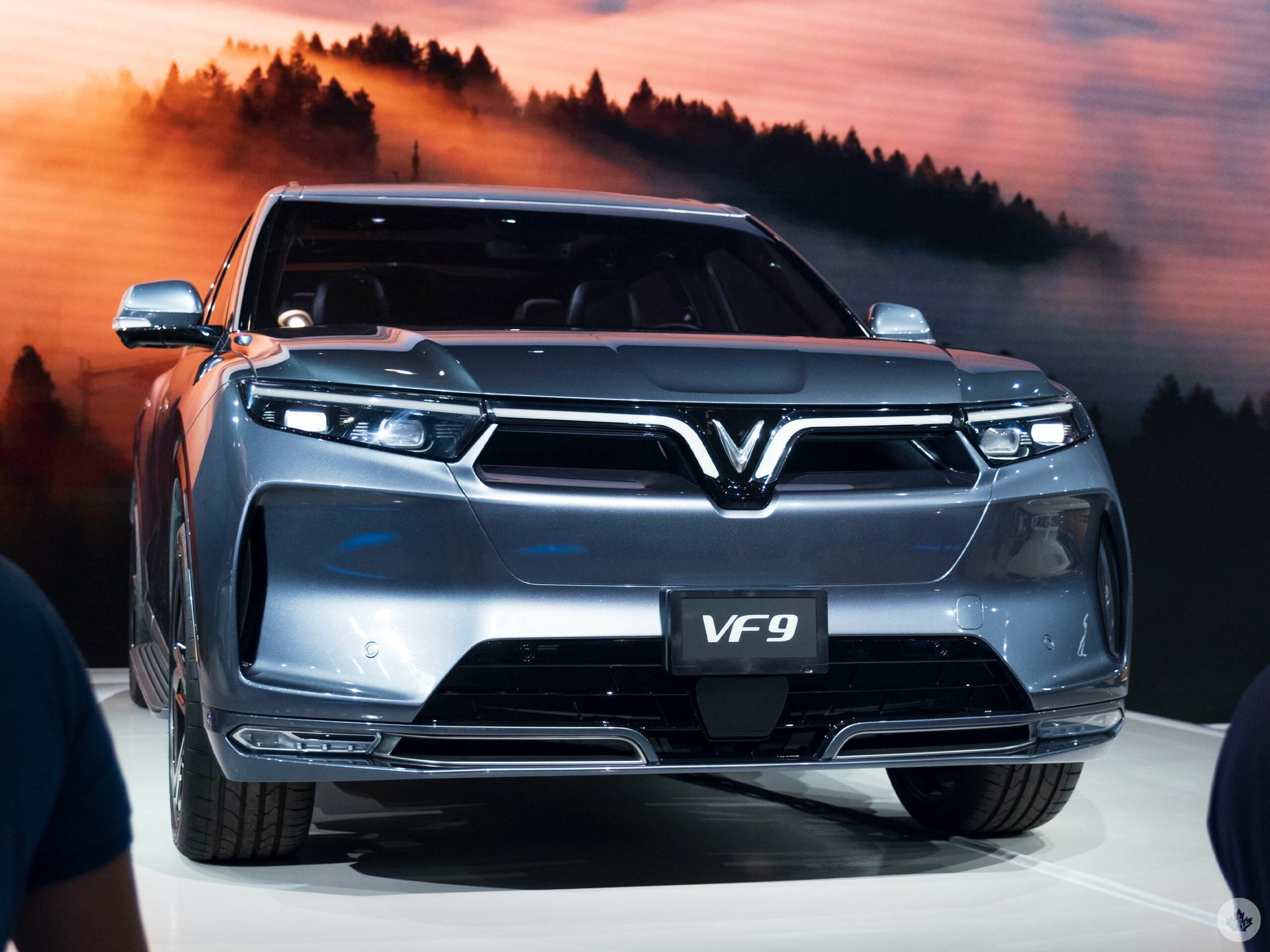 If you’re like me, the name VinFast feels like it’s come out of nowhere. Since Vietnamese cars rarely make it to the world stage, it hasn’t made many headlines in the West, but it’s been slowly building since 2017 with the help of the country’s richest man, Phạm Nhật Vượng. The company started by repurposing BMWs for Vietnam and has grown to the point where it’s taken ownership of a GM plant in the country and has an exclusive license to build a global small car from GM and sell it under the VinFast name.

Now it’s ready to take on the world as it outlined its future plans at the New York Auto Show, including its intention to build an EV assembly plant in North Carolina and a U.S.-based IPO on the stock market. 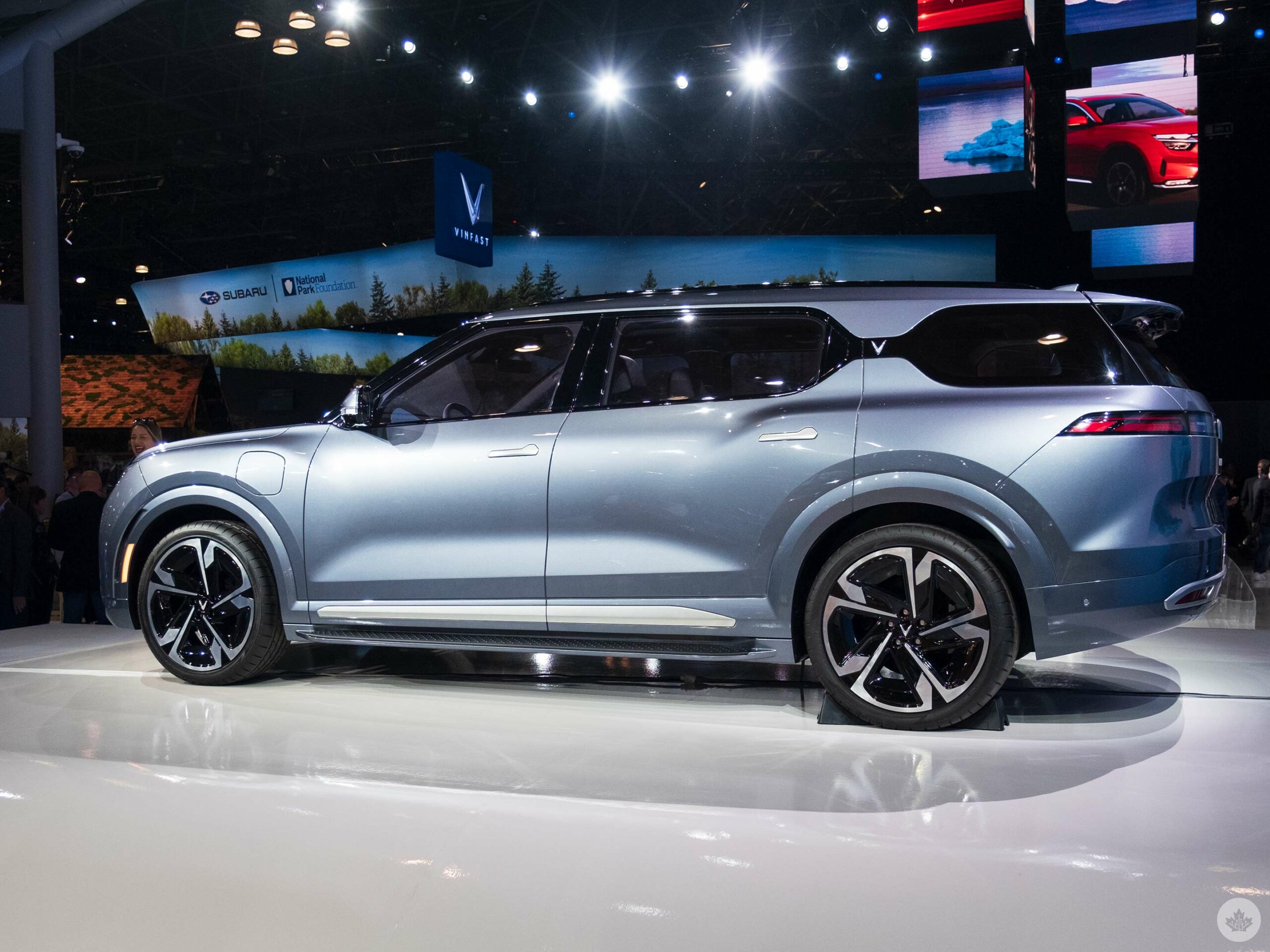 From a Canadian perspective, the company reminds me of Huawei when it first started to gain market share and brand recognition in the West. There were VinFast posters all over the New York Auto Show, big and small, which helped to get people talking about the company, but only time will tell how effectively VinFast has spread its message across the continent. After reading coverage from other publications and chatting with the company, there seems to be a lot of ambition, planning, and enthusiasm for this global launch.

VinFast told Yahoo Finance the U.S. is a key market for its long-term strategy, and that’s why it’s building a factory in the country. The company has big plans for the North American market and wants to show the U.S. consumer base that it’s taking the market seriously. It’s an intelligent plan on VinFast’s part since the U.S. is an important market to gain a foothold in if it aims to take on the rest of the world. 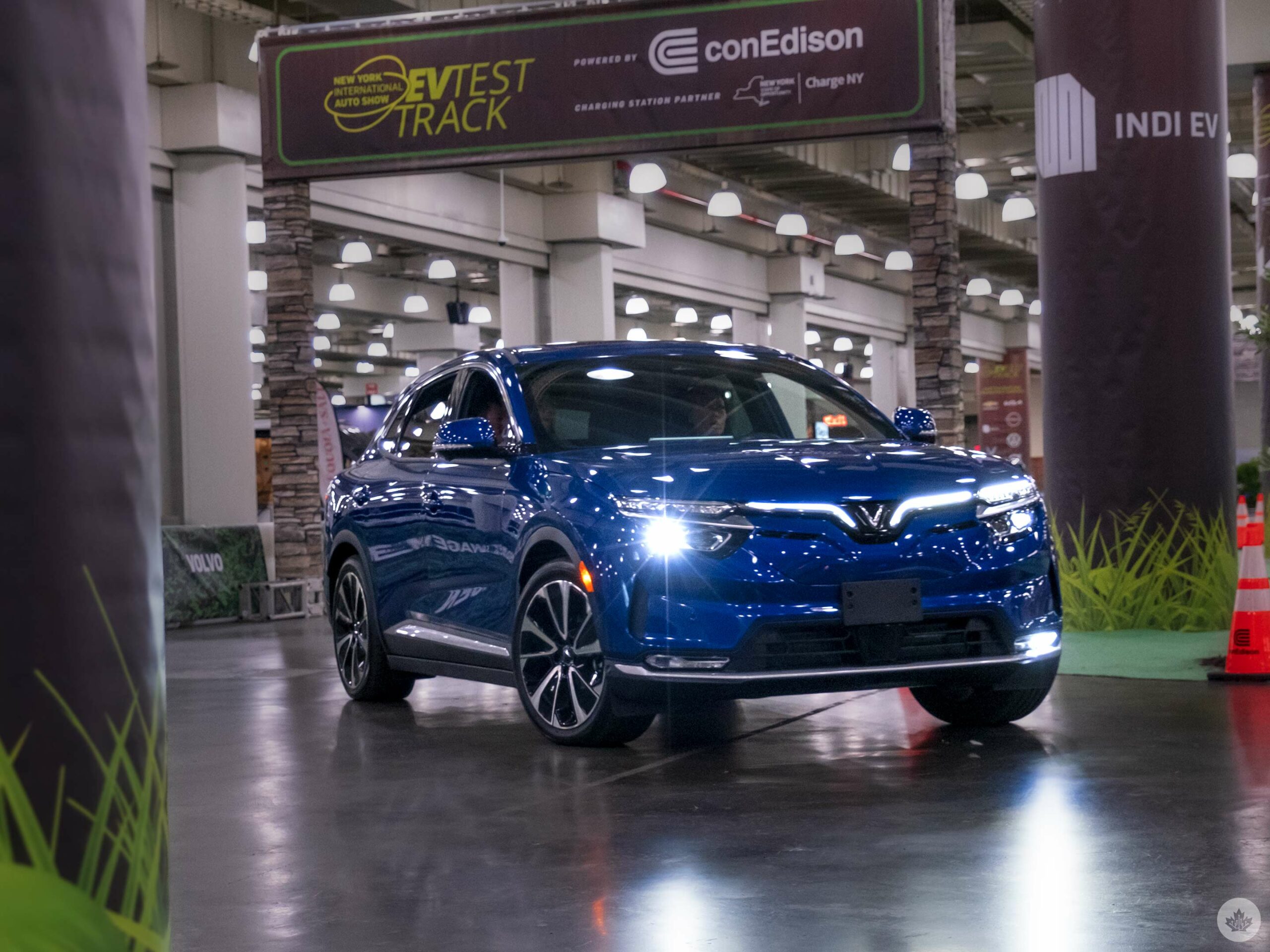 The trim shown off at the auto show is VF8 Plus, which includes larger wheels, a sunroof, a half-second faster 0-100km/h time and a few other perks over the standard VF8 Eco.

The company says that the Plus is rated to drive 445km per charge and the Eco maxes out at roughly 469km. Yet, the most interesting thing about the battery is the company’s unique subscription service model. It allows drivers to pay a monthly fee while they own their car to get their battery swapped out when it drops below 70 percent health. The company hasn’t announced how much this chops off the car’s roughly $51,000 CAD expected price, but it should bring it to a more reasonable cost. 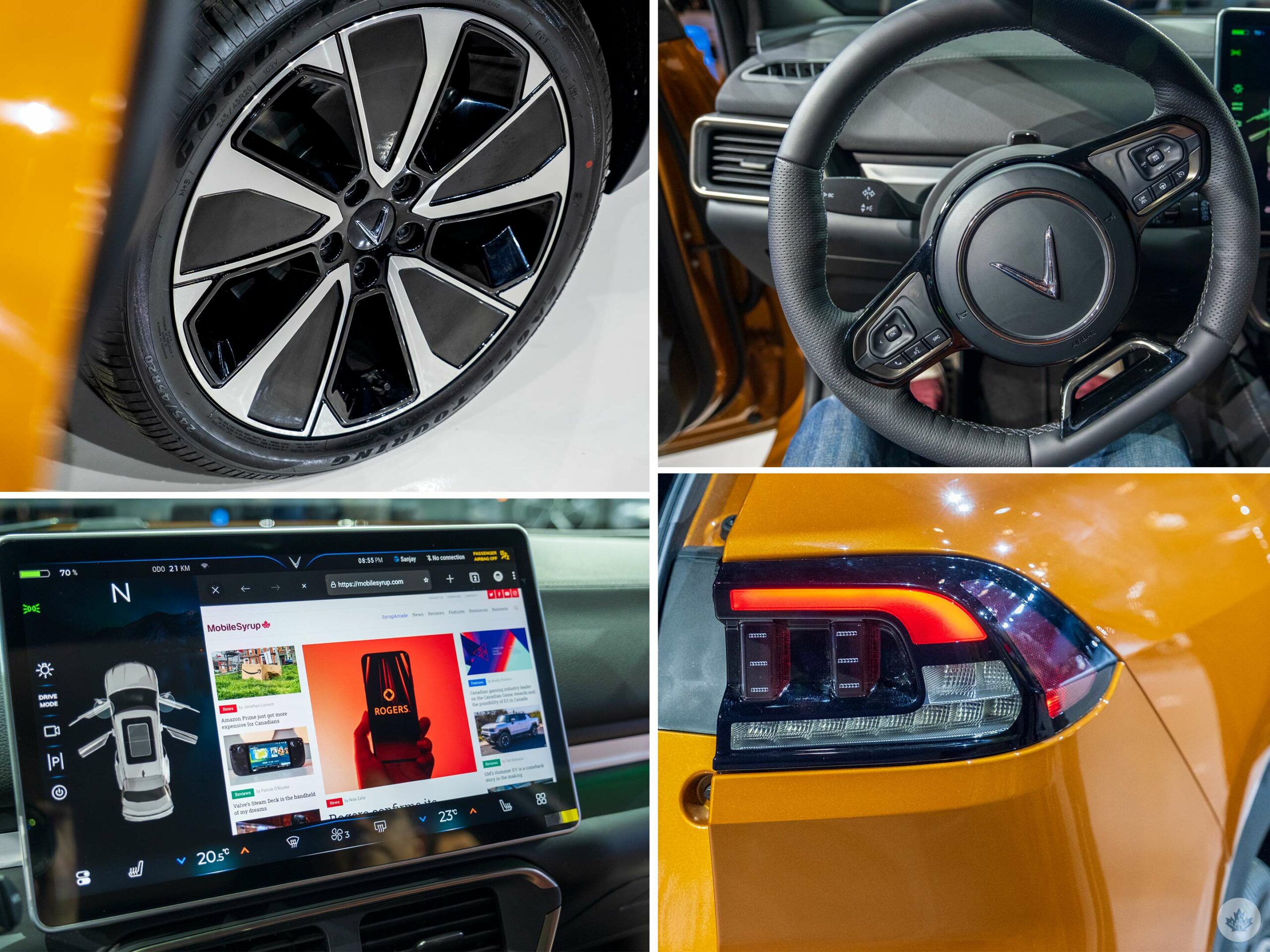 However, in a sense, this creates a system where there are two car payments, one for the car and another for the battery. Plus, the battery payment would never end. That said, I do like the Apple Care-like of piece-of-mind that it adds to the EV experience, I’m just not sure if people are worried enough about battery health to make this a hot selling feature. Paying a small fee every month forever, on the other hand, seems like the type of thing that could annoy prospective drivers.

From the outside, I like the car’s look and the yellow/orange hue. It pops on stage and I think it looks sporty but still casual in an understated way. The company’s online configurator doesn’t list this colour, so it remains to be seen if it will be available at launch. 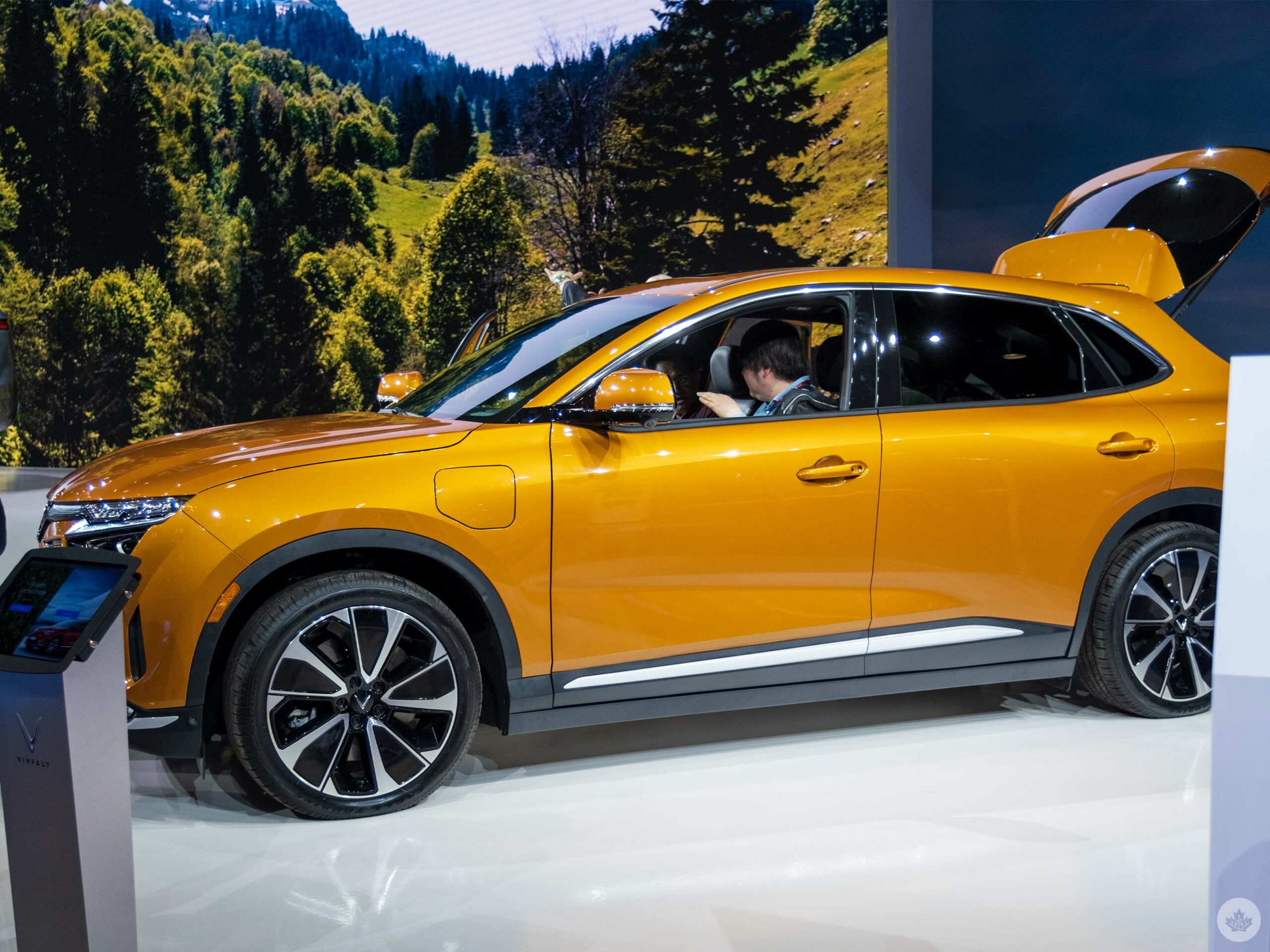 There’s not a lot to say about the car’s appearance, but there are some cool details in its headlights. And integrating the ‘V’ logo effect into the front accent lights looks undeniably cool. I didn’t mind the hood lines either. They don’t stand out, but it’s sporty enough that most people won’t feel nerdy driving it. To me, the overall design gave off Mazda vibes through its sportiness and economical value. The VF9 felt more like a premier Toyota to me with heavy-handed 4Runner vibes.

Inside the vehicle, the style is just as unobtrusive, with a few buttons, a physical volume knob and an expansive touch screen in the centre. Like a Tesla, there’s no instrument cluster since that info sits on the left side of the large 15-inch infotainment display. There’s also a heads-up display that the driver can see floating above the hood to make watching your speed feel more like a traditional car. 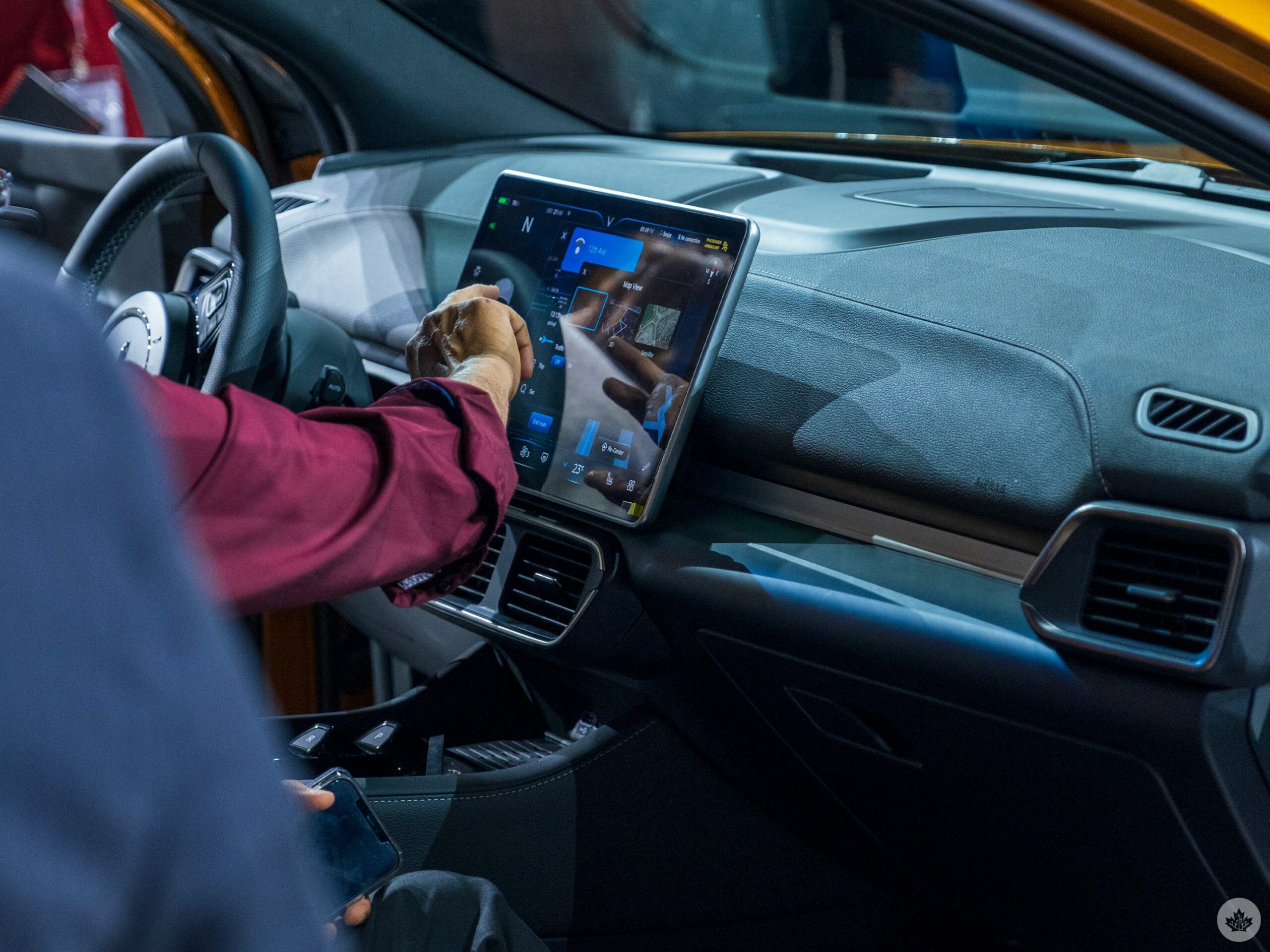 The display seemed well laid out in my brief time with the VF8, and a product manager ran through some simple functions like using a voice assistant to warm up the car, and the company’s companion app. It all looks standard and straightforward. I like the large touchable buttons on the screen and their iOS influence, but once I started navigating menus, the company’s lack of software design prowess began to appear. It seems functional, but VinFast has a long way to go to unify its software presence.

The companion app allows drivers to start the car remotely or even perform tasks like popping open the charging port. I didn’t get to spend much time with the app, but the main screen shows nearby charging stations. The app also includes options for controlling climate, setting up valet mode, summoning the car and more. It remains to be seen what the app will be capable of doing when the car launches.

VinFast’s website mentions that it uses partners to develop a lot of its tech, so it’s hard to know what came from the company’s mind and what came off the shelf. Even the car’s appearance was outsourced to the Italian car design house Pininfarina. Outsourcing the design is one thing, but the infotainment and other tech could end up biting the company in the long run, like OnePlus with Cyanogen mod many years ago. Beyond the infotainment, VinFast loaded up the car with sensors and cameras to enable a plethora of driver assistance features. This includes lane assist, lane changing assist, hands-free highway driving, collision warnings and mitigations and more. I could not test out any of these features during my time checking out the car.

Overall I walked away from the VinFast booth excited to see a new EV challenger, especially one from a country like Vietnam that’s not known for making cars. EVs are shaking up the world so much that even a country embroiled in conflict when Japanese automakers like Toyota finally came to North America in the 1950s is finally getting their chance to join the automotive big leagues. It’s an exciting time to be a car nerd. 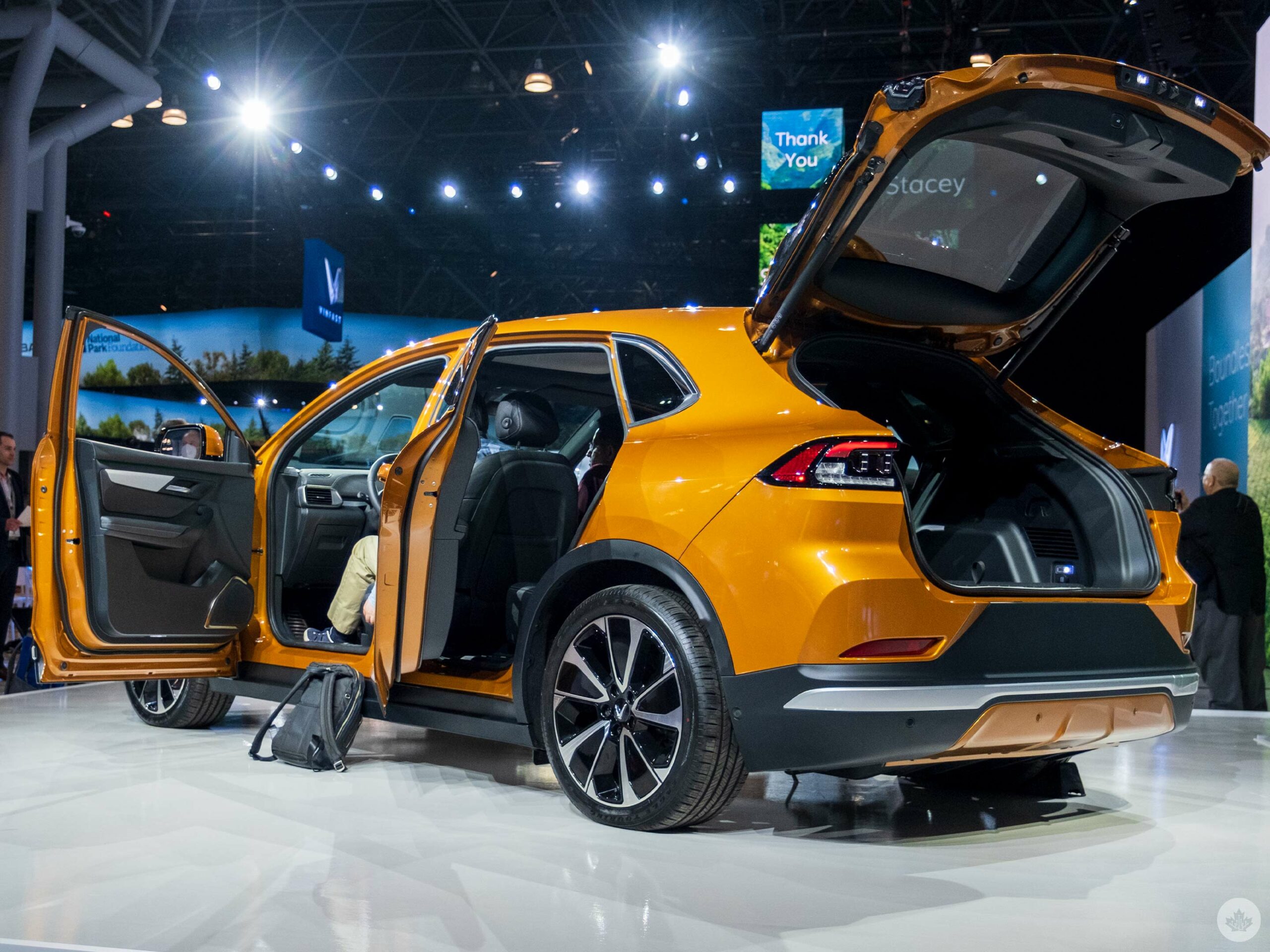 With all of this in mind, I’m still a little skeptical of VinFast, given the company appeared out of nowhere with three vehicle models and lofty ambitions. I could only poke around this orange VF8 for roughly ten minutes, and then I rode in another car for maybe five minutes. It’s also important to mention that I couldn’t shake the possibility that these vehicles were put together for the New York Auto Show and that the actual consumer versions could be missing features.

Checking out VinFast’s website doesn’t help this feeling either given its very budget-looking design, NFT incentives and other pre-order bonuses like a stay at a resort in Vietnam. Hopefully, as we get further through 2022, the company will let its cars do the talking.