Before there were rumours of $10,000 Apple Watches, there were, and still are, timepieces by designers with price tags five times the size. People have purchased watches as investments for hundreds of years, the constant being as true as the sun comes up every morning: time is the one non-negotiable, ever-lasting commodity that, tracked or note, cannot be influenced.

The watch industry is an enormous one, representing the GDP of a small country in annual revenue. When Apple announced it was getting into the timepiece business last September, it did so fully aware of its responsibility both to the technological facets of what makes something “smart,” and the fickle, time-sensitive realities of what makes something fashionable.

But two years before Apple announced its Watch, and only a few months after Pebble debuted on Kickstarter, a small California startup known for making sensor-filled medical bracelets got the idea of interacting with smartphones through a traditional analog wristwatch. 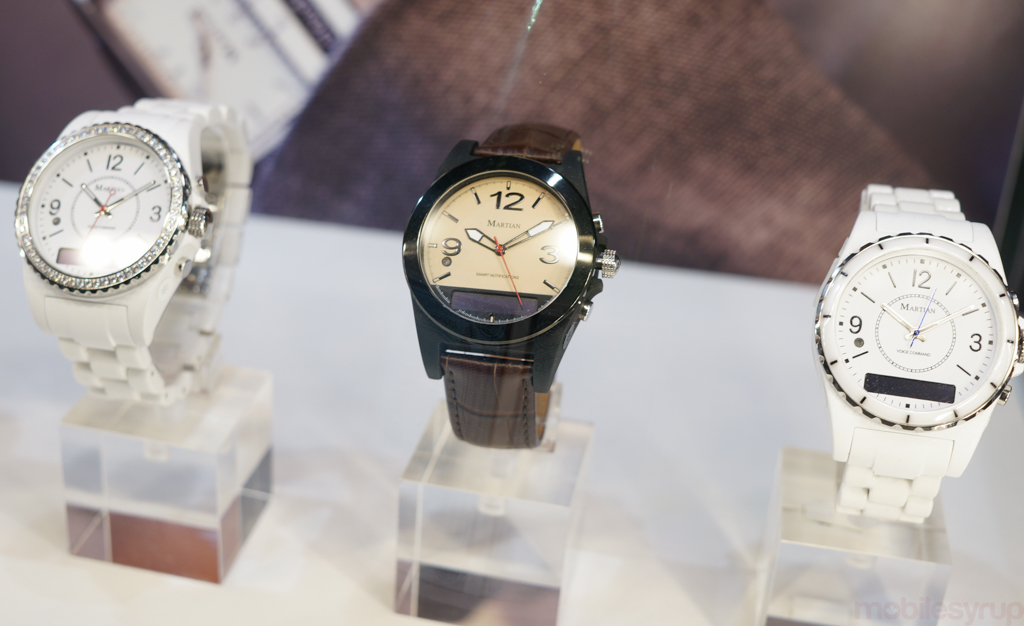 Martian may not be a household name in the smartwatch business, but come September its brand is going to be considerably more ubiquitous. The company behind the Voice Command and Notifier smartwatches announced at CES this year a collaboration with fashion brand Guess, owned by Timex Group, to use its smart module and associated ticker-based notification system in its line of “fashion” watches.

Dubbed Guess Connect and scheduled to go on sale during the fourth quarter of this year, when many watches are purchased as gifts, the Guess Connect uses Martian’s dual interaction system to surreptitiously send commands and receive notifications to and from an iPhone or Android device.

“There are really two parts of smartwatch functionality: there’s outgoing function and control, to make a voice command or whatever; and that was our initial focus, the outgoing voice command, being able to access Siri or Google Now on your wrist, that was really the spark that started everything,” said Stan Kinsey, President and Chief Creative Officer of Martian Watches.

“But when you have that [voice] functionality, you want to know who’s calling, you want incoming notifications. But at the time [back in 2012], iOS didn’t support Bluetooth LE push notifications. So we had to write a pretty big push algorithm — we went out to get the information and fed it to your watch. But when BLE was added in October 2013, that’s when we said ’let’s go out and make a watch that takes advantage of push notifications.’”

These advances culminated into a series of smartwatches that takes features from both the Voice Commander and Notifier, and will go on sale later this year. Kinsey thinks that smartwatches are best when they’re simple, when you know what kind of notification you’re receiving without actually looking down at your wrist.

“What we did with notifications,” he said, clearly proud of his company’s accomplishments, “You can filter them; we put vibration patterns, we were the first one to do that. Tap the glass within five minutes of the notification to get the last notification back.” Using an Android or iOS app, users can control the vibration pattern from an incoming notification, so an email or text can have three short, two long pulses, while a phone call could have a series of equally-spaced rhythms. 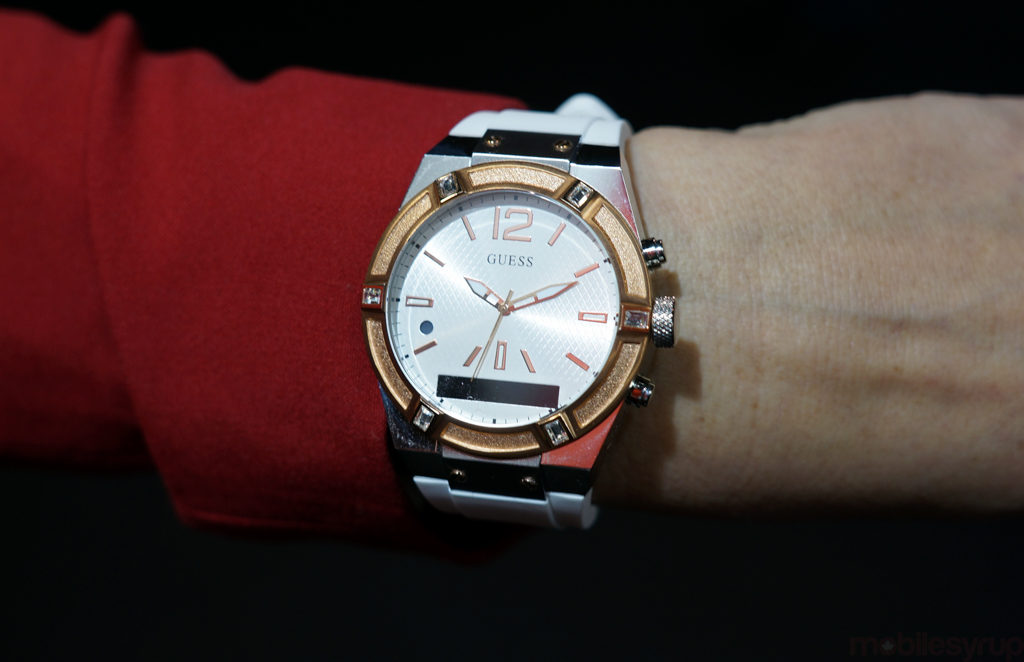 There’s an elegance and simplicity about the Martian Watch ethos, which combines outgoing voice and incoming text with the constraint necessary for a particular form factor. Kinsey says that most people he’s spoken to don’t want to recreate smartphone features on a wrist, and that what Apple has developed, with haptic feedback and tappable messages, is a more reasonable expectation of what one wants to accomplish on the wrist.

But wearables expert and MobileSyrup contributor, Tom Emrich, isn’t so sure. “I like the partnership [between Martian and Guess],” he tells me, “but I don’t think it’s a home run.” The problem, he told me, is that Guess customers looking for a fashion watch won’t necessarily walk out of the store with a smartwatch. “And if I am looking for a smartwatch that can harken back to the aesthetic of a watch, I’d go with [Huawei’s Watch] or the LG Watch Urbane.”

The collaboration with Guess came from a meeting only 12 months ago, a time period half the length of most watch-related projects, according to Brett Gibson, Senior Vice President of International Sales for Sequel AG, Guess’s parent company. “I think that the thing that we liked was that this make sense within our product. Us wanting to get into wearables was one thing, but doing it and staying true to our brand was another,” he said.

“When we came across Martian, it just made perfect sense. It was the best of both worlds, and now we’ve coined the phrase, ‘fashion meets function.’”

How to sell fashion watches that happen to be smartwatches is another proposition altogether. Most watch vendors — and Guess has 15,000 distributors in 115 countries — don’t really focus on the technology aspects of their products, so Guess is going to be paying for extensive training for owners and CSRs, which will benefit the ecosystem as a whole.

“We’re looking to go into places that the tech world normally doesn’t go, like the fashion arena. The department store, the global jeweller is looking to get into this world, but they don’t know how to do it,” said Gibson.

The other part of smartwatches that people need to understand, he continued, is that the way technology is typically sold runs counter to the way fashion watches are marketed. Technology is a high-volume, low-margin endeavour, one that doesn’t care too much for fashion, as obsolescence leads to high turnover. The high-end watch market is the opposite, where fashion successes and mistakes create value in both the short and long term.

“Fashion relies on having a margin that allows you to mark down what you can’t sell. You have to make mistakes in fashion. Unless you have colours that don’t sell, you’re not going to be cool,” Gibson told me.

“Unless you go shop the world of watches, it’s hard to get a sense of what people are willing to pay, especially if they know what they want. There’s a fashion consumer out there that will pay a premium for the right look, no matter what it does.”

That’s why Guess is betting on the $349 to $399 price point, which is marginally higher than its typical fashion watch, but not out of the realm of most smartwatches — the Apple Watch, for example, begins at $349, but will likely sell in the $699-$799 range for the stainless steel model.

But Guess believes that Martian’s technology, with its replaceable module, is the perfect stand-in for fashion and function. The Guess Connect can actually run as a regular watch even when the Martian module is being replaced, or has run out of battery. The smartwatch features run for about two days, but the movement itself has a battery that lasts up to two years.

But Kinsey believes Pebble wasn’t an ugly watch that came to market before its time, but a fashion watch that people — early adopters — were happy to show off. “People wore them to make a statement, to look different. Because if it looked like [a Martian] it didn’t look different enough, and people wouldn’t know they were early adopters.

“But last year, with Moto 360, moving more towards streamlined. And it will be interesting to see, with Apple coming, what it does. But the more it moves from early adopters to mainstream, the quicker people will realize that buying a smartwatch is just buying a watch with different technology. All watches have technology. But once they realize that a watch that looks like ours can do the same thing as their Moto 360 then we think they will move back to the analog look.

I mean, what are these current smartwatches trying to do? They’re trying to bring that classic Rolex look onto their digital watch.”