Are big tablets the future of small TVs? Samsung thinks so

In mid-January, as the afternoon’s grey light faded into typical winter darkness, the MobileSyrup and BetaKit offices prepared to multitask.

News slowly trickled in, as it does post-CES, but we had a task to perform that would fulfil both personal and professional obligations: to observe the Toronto Raptors play the Orlando Magic at London’s O2 Arena.

The match, the latest in the NBA’s push to grow Europe’s interest in basketball, turned exciting when Orlando’s Victor Oladipo hit a three-point shot to tie the game with just over 30-seconds left in regulation play. Though the Raptors won in overtime, the lasting impression of the experience had less to do with the sport than the way it was watched.

Perched at the end of our communal table was an oversized tablet, a product from Samsung, the Galaxy View that, despite tepid reviews, has been picked up by Bell as a primary conduit for its hybrid Fibe TV offering. That category is one of Bell’s fastest-growing, in part because it offers digital access to practically all of the company’s television content over WiFi — through an app. 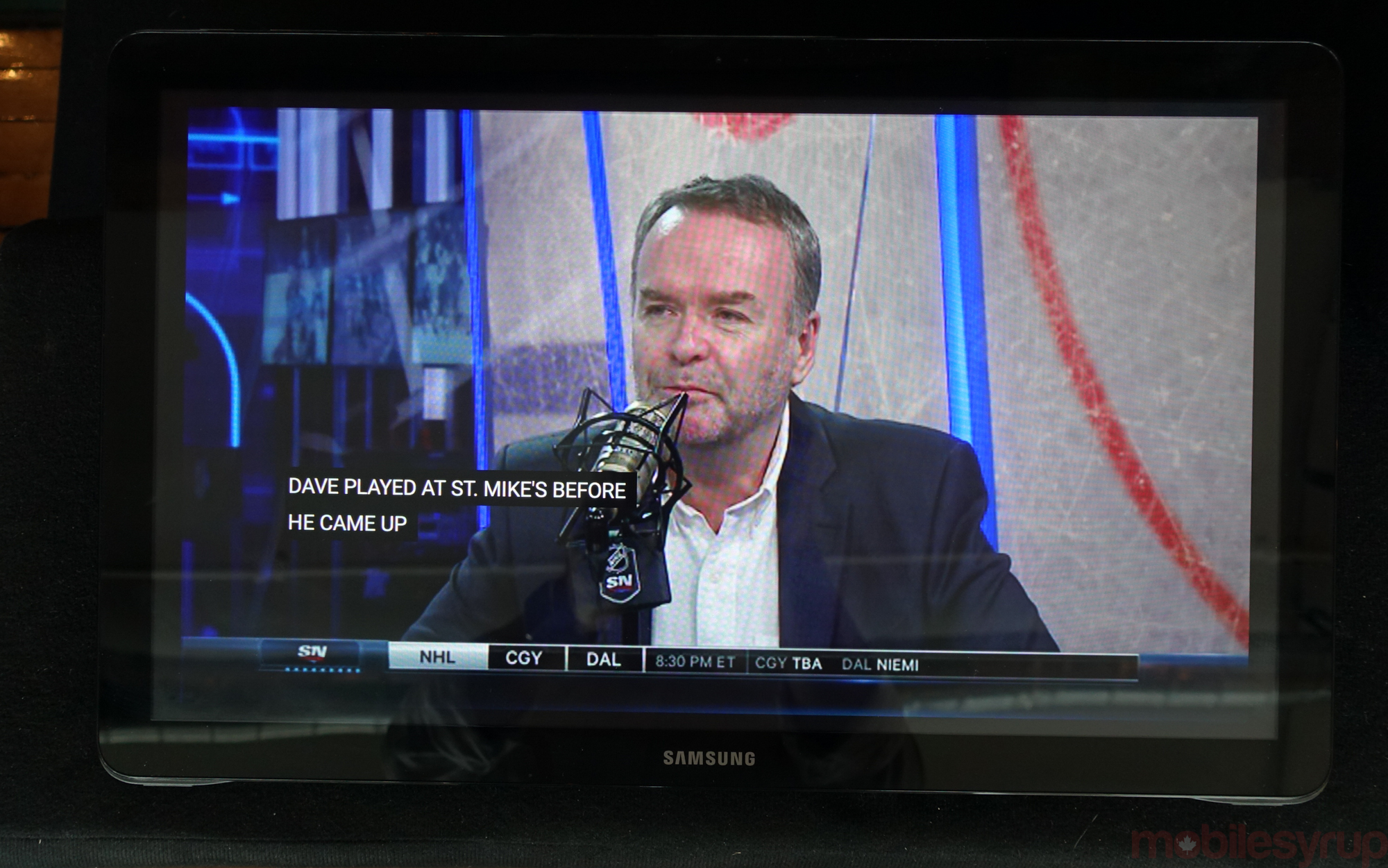 Canadian telecom providers have grappled in different ways with the changing viewing habits of consumers. For companies like Bell and Rogers that control the network, the device distribution and the content, using mobile devices to incentivize the subscription of expensive monthly television packages slows that erosion.

Though Samsung sells the $699 18.4-inch Galaxy View tablet on its own in other parts of the world, it chose to work with Bell in Canada, narrowing its focus to that of a portable second screen, one that can recreate the plugged-in broadcasts of traditional set-top boxes.

To that end, Samsung pre-installs Bell’s Fibe TV app, along with a number of popular streaming services like Netflix, CraveTV (a Bell product) and others. The tablet lasts eight hours on a single charge, and its 1080p display, though relatively low-density compared to popular large alternatives like the iPad Pro and Surface Pro, does an admirable job recreating native HD content on the go. 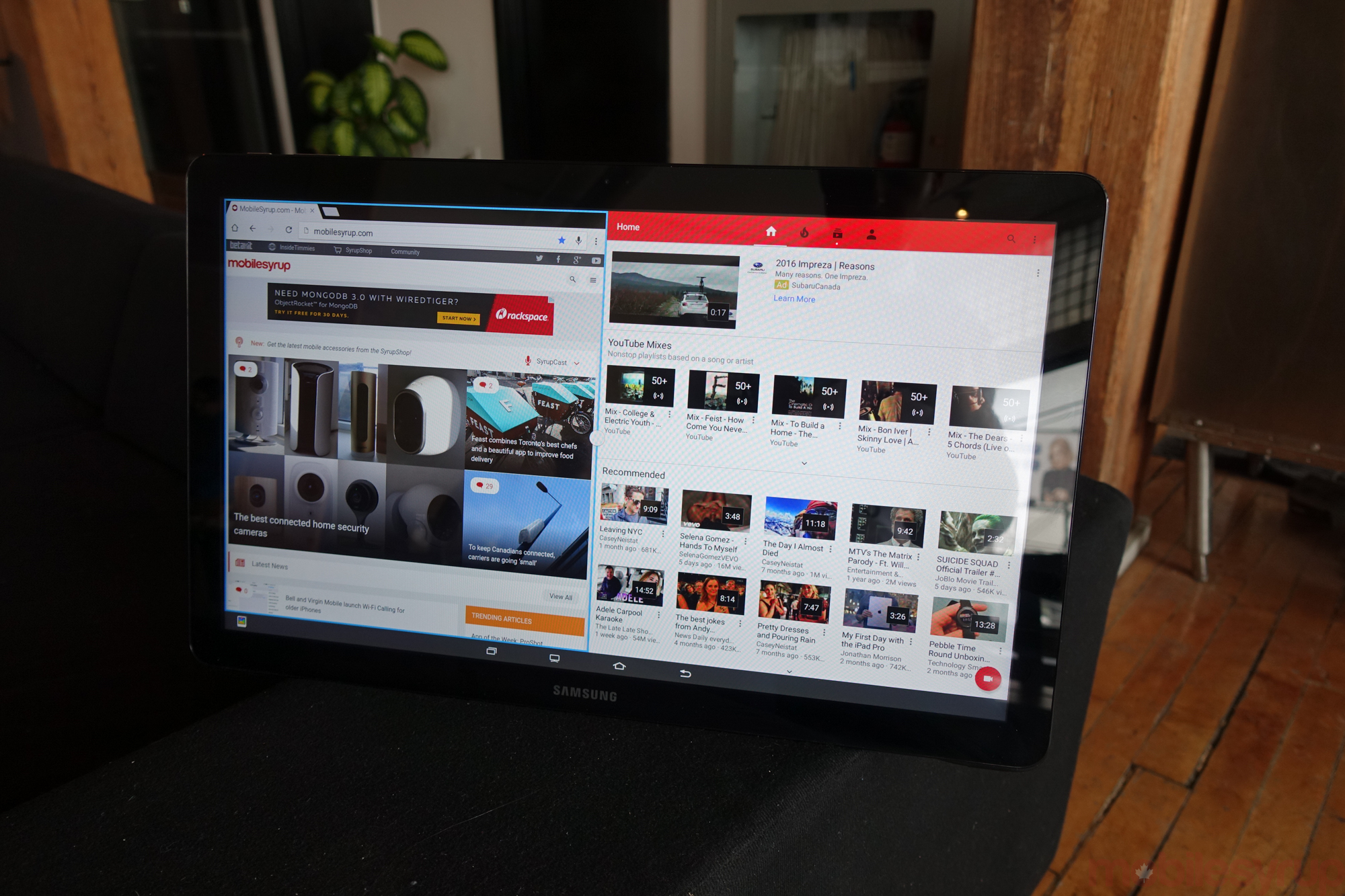 That the Galaxy View is a bona fide Android tablet is secondary, a problem exacerbated by the lack of truly scalable software that can be enjoyed on a screen this large. Games? Sure, but without a controller tapping the vast expanses of the LCD quickly becomes a chore. Word processing? Fine, but the UI elements look comically large.

Indeed, projecting media appears to be the Galaxy View’s raison d’être, and, despite its $699 price tag ($499 if you already have Bell services), it does that one thing relatively well. Unlike, say, a Surface Pro, the Galaxy View can only be propped in two positions: a “watching” mode, which offers a slight decline by using the shifting stand to prop up the screen at a recessed angle; and a “typing” mode, which props the thing near-flush to the desk. Neither feels ideal for any purpose, and the poor-quality, l0w-resolution, reflective LCD panel stupefies given the tablet’s price.

Its one saving grace, Samsung’s Multi Window feature, makes the argument for more screen real estate, but only a handful of apps — most notably, not Bell’s Fibe TV — work with the multitask-friendly optimization. 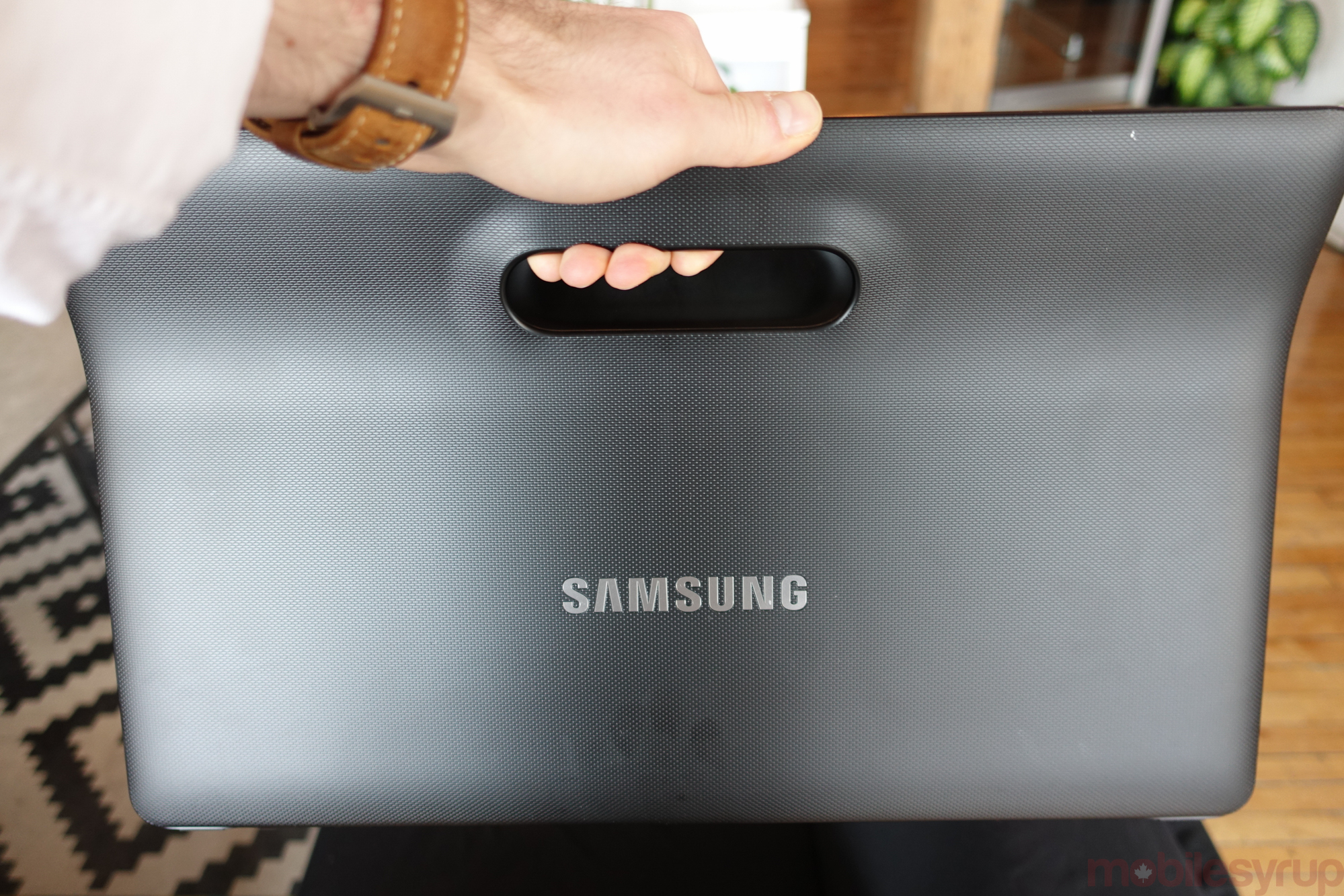 In using the Galaxy View, I tried to separate the product from the intent: one is a near-miss, and overpriced to boot; the other represents an idealistic vision of the future of television.

Companies like Samsung have for years been bulldozing television buyers with clunky operating systems with no semblance of developer support, only realizing in the middle of this decade that it’s not enough to merely pre-install Netflix to call a television “smart”. 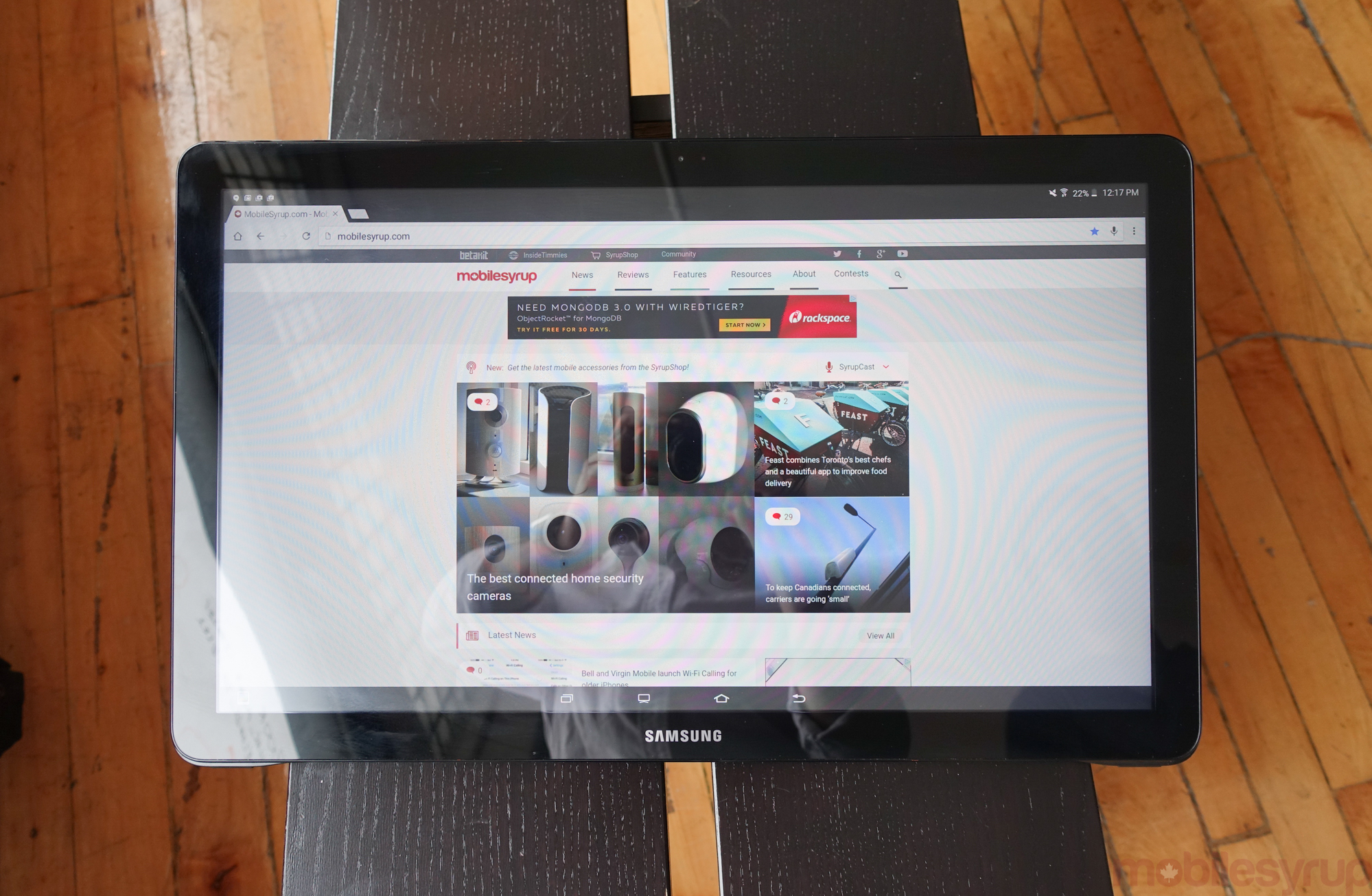 As users’ needs became more sophisticated, a product like the Galaxy View, with its carte blanche potential of being used as a wireless television — it even has a handle! — makes sense to a certain type of viewer. But most Canadians won’t benefit from this distribution deal: it is a vehicle for Fibe TV, which only works properly with an expensive subscription. The Fibe TV app is quite nice, and allows for the streaming of hundreds of live television channels, along with video-on-demand and PVR options for watch-it-later aficionados.

But without one of those television packages, Canadians are still beset with the reality of our vertically-integrated media owners. Where is our Hulu, Amazon Prime or Sling TV? Why is Netflix still the only true over-the-top service that offers original content? CraveTV and Shomi are now available across the country, and can augment one’s predilections for binging The Sopranos in a weekend, but why are Canadians still unable to stream a lick of live sports? 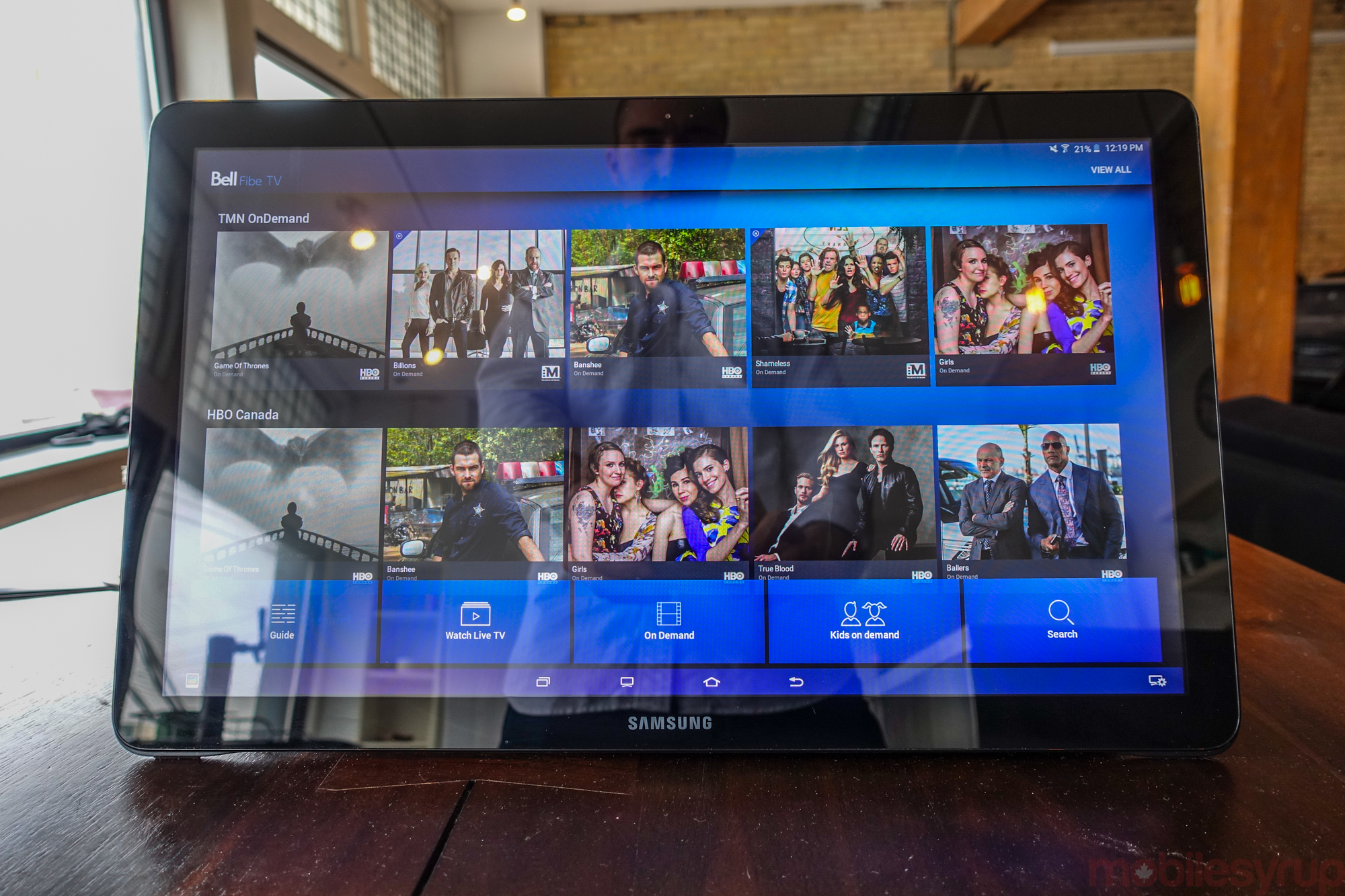 With the March 1st deadline for “Skinny Basic” television service quickly approaching, it’s unlikely we’ll experience a sea change in the way Canadians consume live content, especially given all similar warnings of the types of price increases wireless users saw with the introduction of two-year contracts.

At the very least, though, it will expose products like the Galaxy View to more people, and, should they demand more 18-inch tablets with handles to underwrite their advancing media consumption habits, perhaps Samsung will create one with fewer flaws, and, crucially, for fewer dollars. 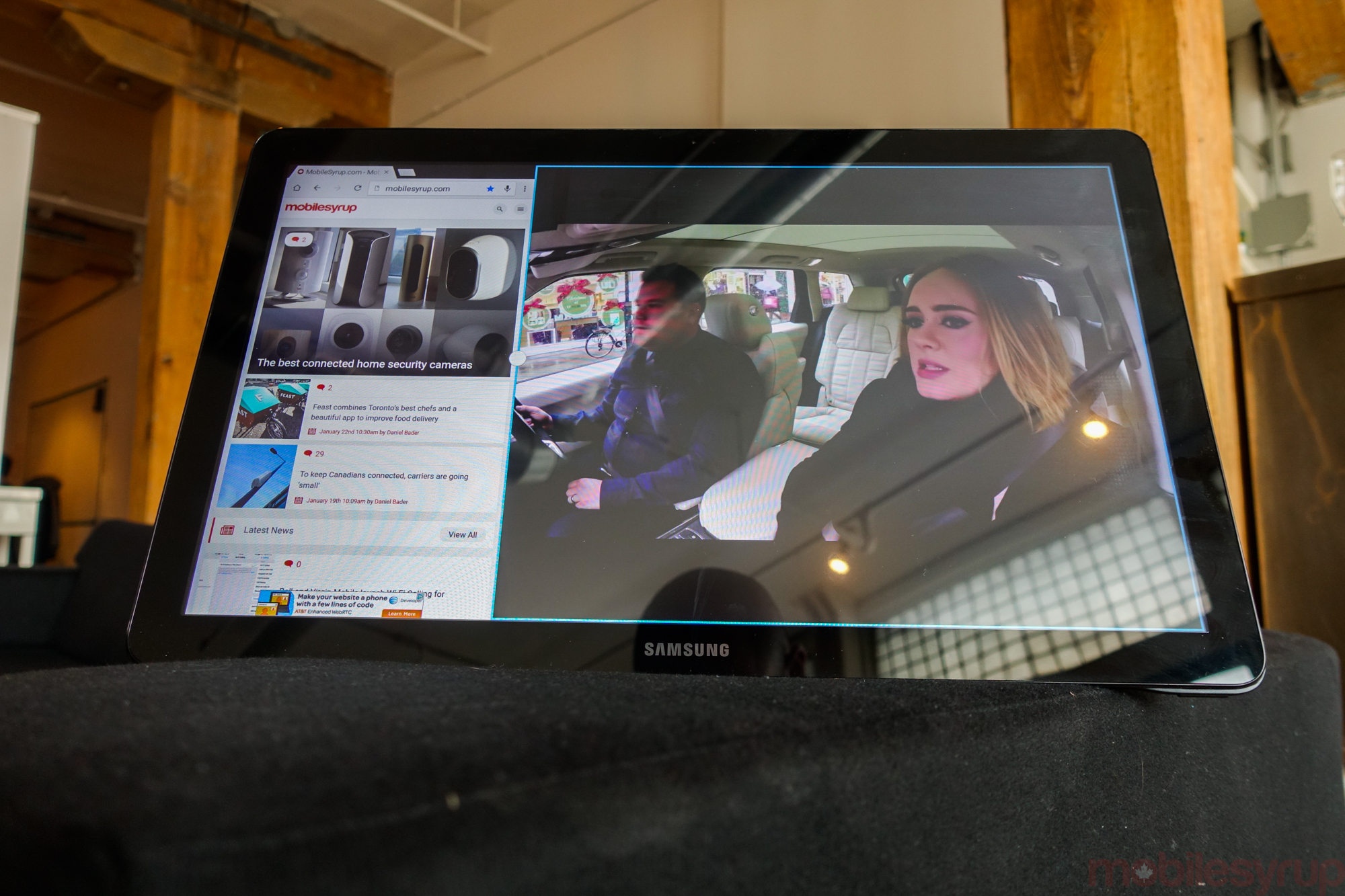