With Microsoft and Intel by its side, Samsung has entered the two-in-one market with a creditable stab at the laptop-tablet hybrid.

The Samsung Galaxy TabPro S marks the first Galaxy to run an operating system other than Android, and is in many ways unique in the product category, due to its Super AMOLED screen, slight size and included keyboard. But how does it stack up against what most regard as the reigning champ of two-in-ones, the Surface Pro 4? And can this device truly hope for mainstream success? I spent a week with the TabPro S to attempt to find out. 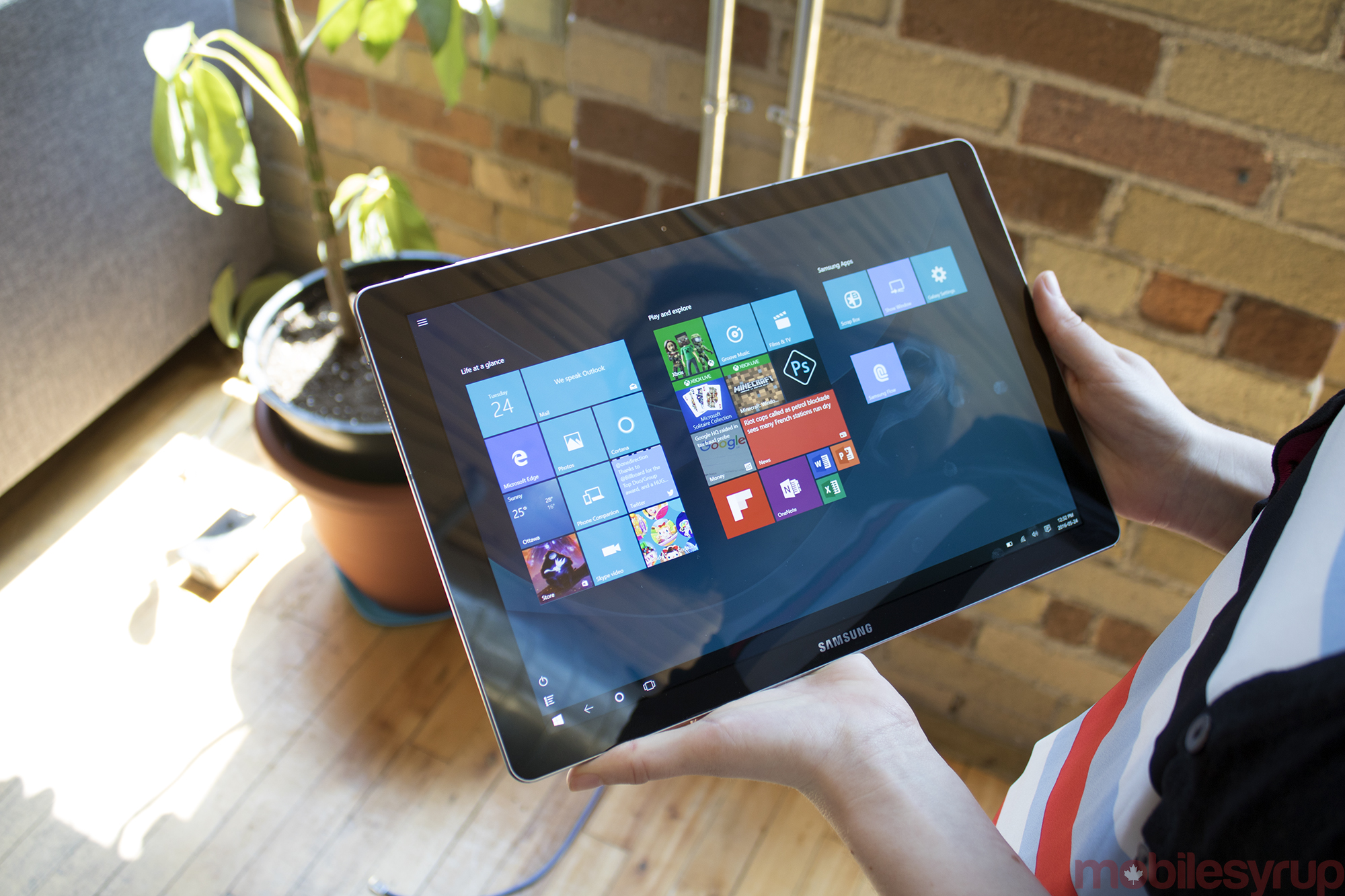 The TabPro S makes a great first impression. The device’s included faux leather keyboard case makes it look like a classy folio. It’s more demurely professional than the Surface Pro 4’s fabric keyboard covers and may in fact even challenge the 12.9-inch iPad Pro in sleekness. 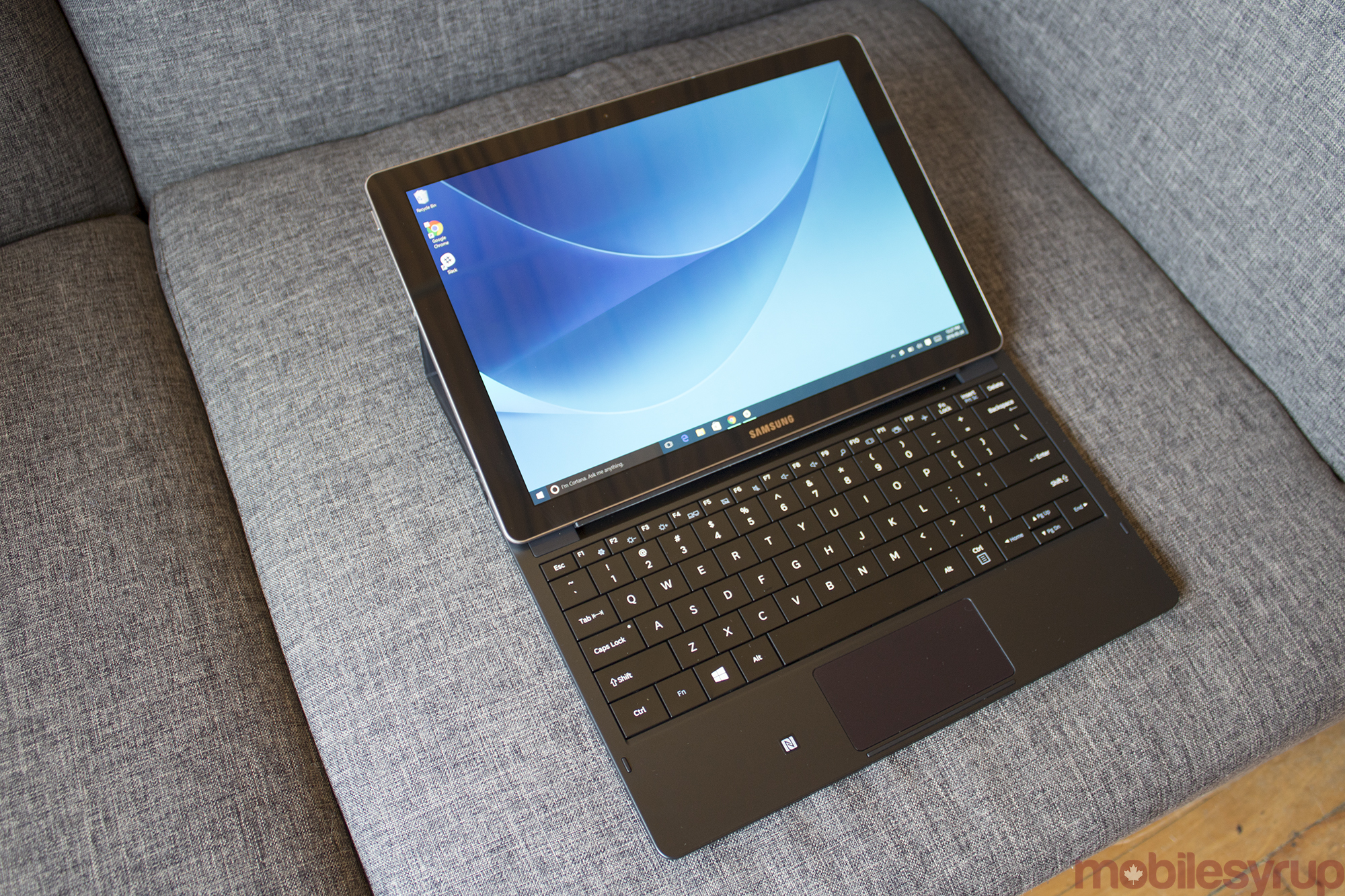 The thing that really wowed me upon my first interaction, however, was the display. The TabPro S’ display features Super AMOLED technology, leading to crisp blacks and brilliant contrast. Just like on Samsung’s smartphones, the beautiful display almost blinded me to certain legitimate issues.

For instance, to facilitate its svelte physique, the TabPro S only offers a single USB-C port and 3.5mm audio jack. While USB-C may be the way of the future, for now it makes the TabPro S a lot less accessible, all but necessitating the added purchase of an adapter hub. In comparison, the Surface Pro 4 has a USB 3.0 port, MicroSDXC card slot, Mini DisplayPort and charging port. 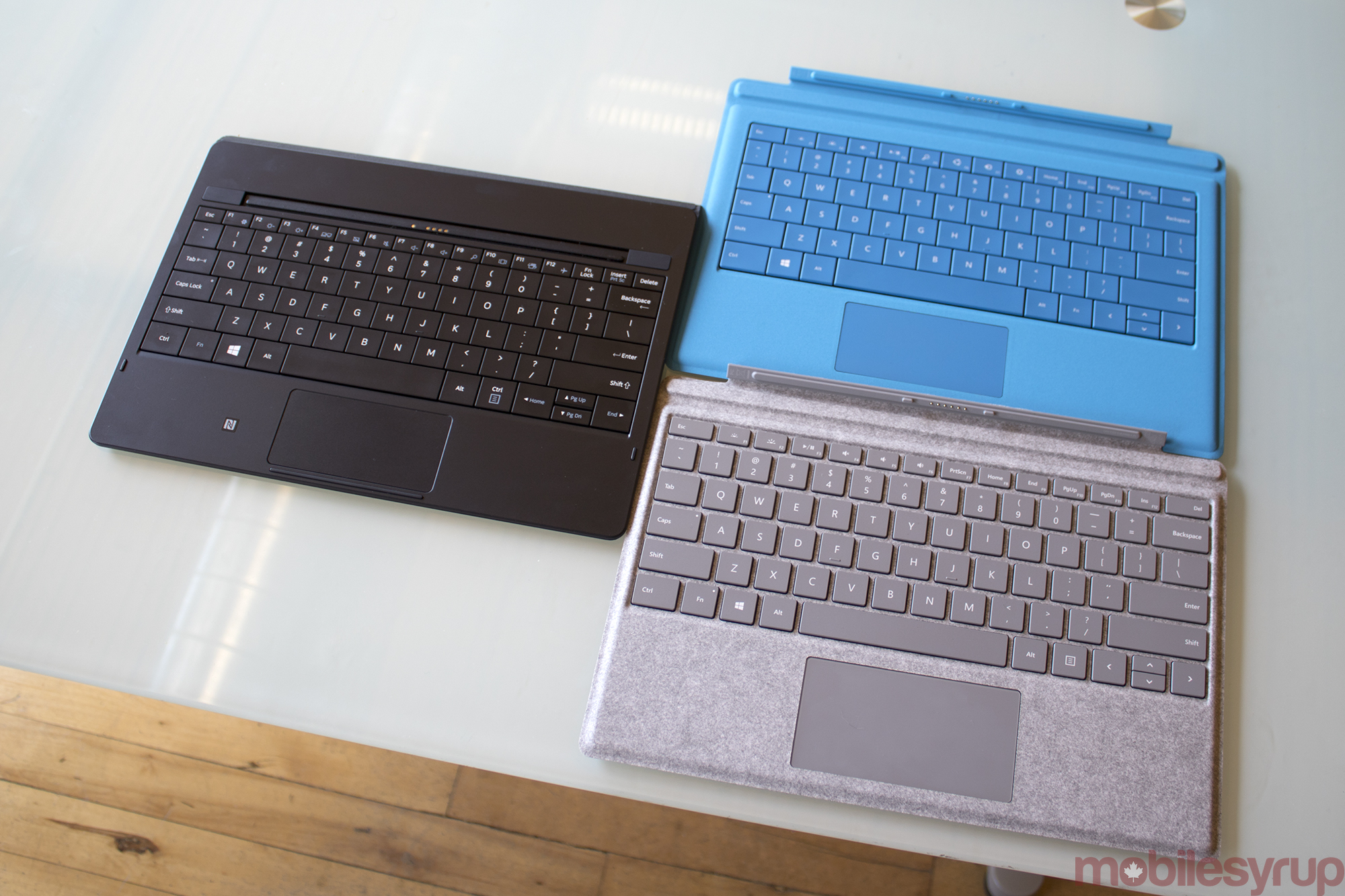 A crucial element of any two-in-one device is its keyboard. It defines whether or not the device can endure serious usage as a laptop. Skimp on the keyboard and the entire device suffers. Unfortunately, Samsung skimped on the keyboard.

It’s just not in the same league as the Surface Pro 4. The Surface’s keyboard has island-style keys, meaning they’re spaced apart from each other like on most modern laptops, as well as a smooth-scrolling trackpad.

The keys on the TabPro S are squished together and the track pad is significantly stickier and more unpredictable. Cutting and pasting links, for instance, often resulted in a chaotic jumble of tabs opening and closing, while the scrolling was somewhat stuttering. 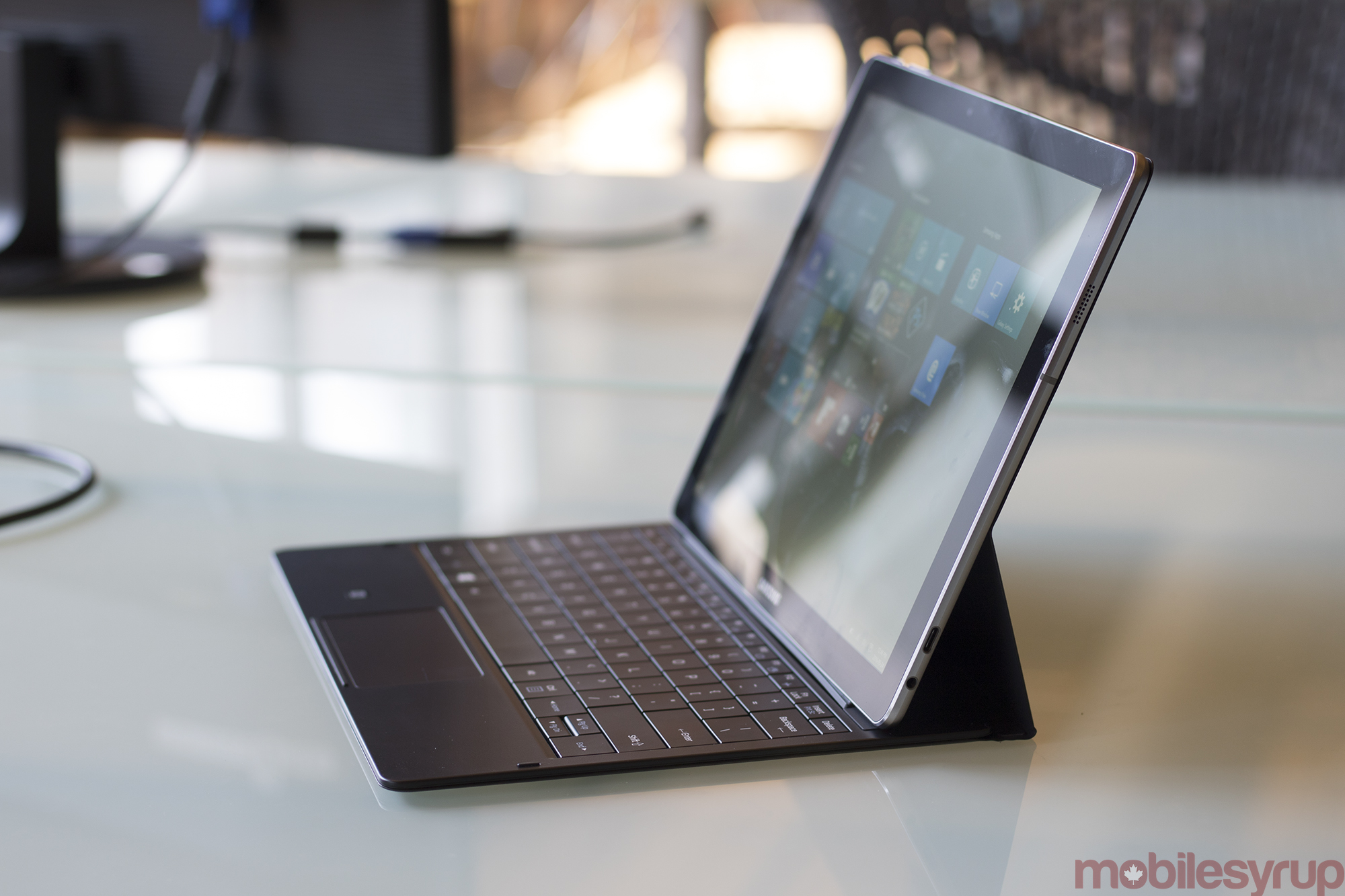 Its case also has an exceedingly rigid form factor. While the Surface Pro 4 has a kickstand built in that can rotate to any angle, the magnetic case of the TabPro S has exactly two angles: upright, for desk work, and reclined, for lap use. Neither are optimal.

One good thing about the case, however, is that it’s included in the box, which is not so with the Surface Pro 4. 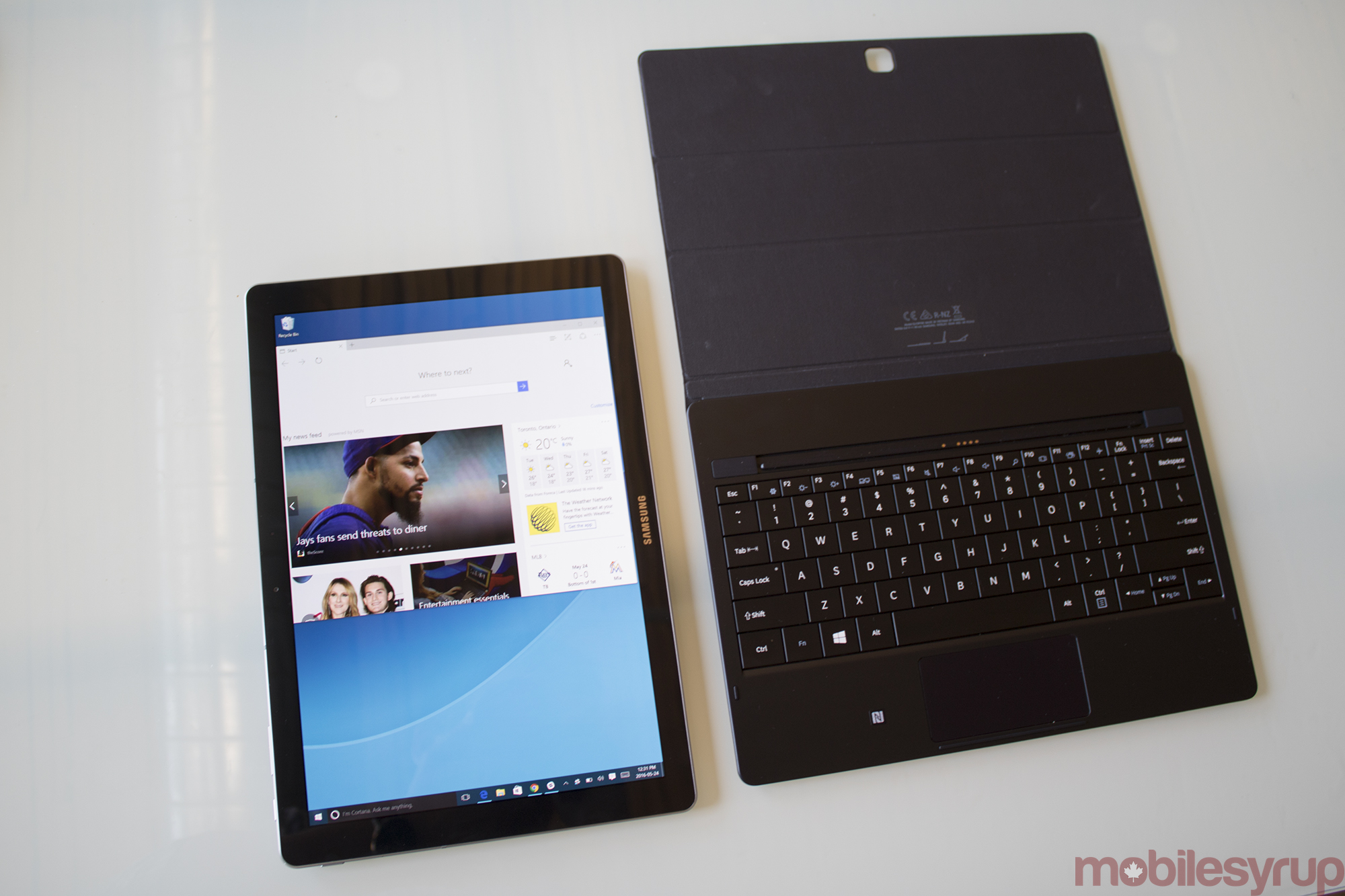 The TabPro S is equipped with an Intel Core M3 processor, the same SoC that the Surface Pro 4 packs in its 128 GB version. It’s more than enough to perform day-to-day work tasks, like web-browsing and document editing, but if you’re computing needs are more heavy-duty – say video editing – this device isn’t ideal for you.

The TabPro S isn’t meant to be turbo charged, however – it’s lack of an internal fan makes that a necessity. On that front, I was pleasantly surprised to find that it did not notably overheat at any point during use.

Owning a Galaxy smartphone opens up cool additional features. Since the TabPro S is NFC-enabled, anyone with a recent Galaxy device can tap the keyboard case, then scan their fingerprint on their phone to unlock the device. Users can also can check and reply to phone notifications.

Enough juice for a working day 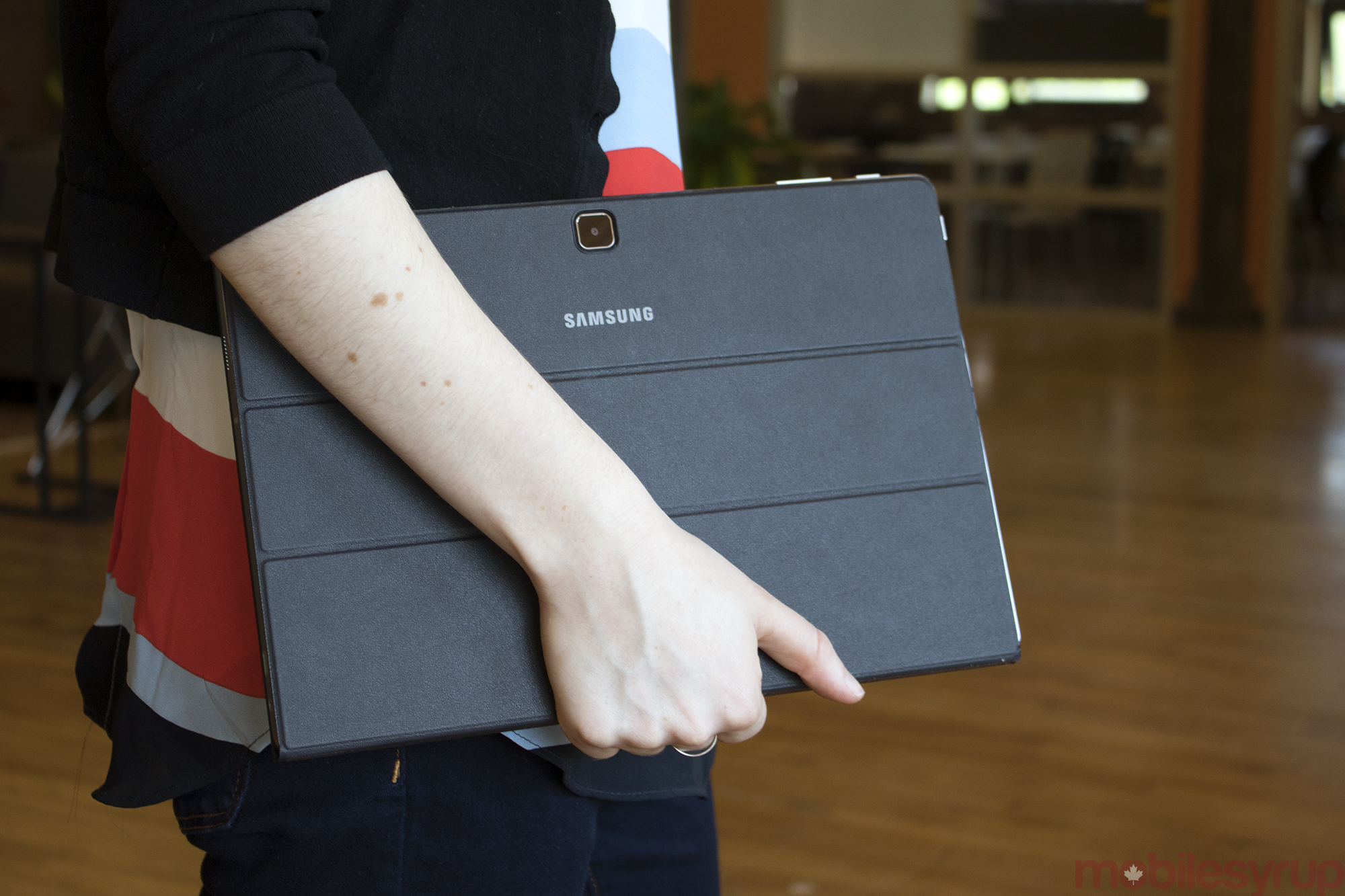 Just like the processor performance, the battery life of the TabPro S was satisfactory. With my moderate work use – browsing, Word, Slack – the device lasted 13 hours before shutting off, much over a full work day. It promises 10.5 for heavier use. It also states that it should take two and a half hours to charge the 5,200mAh battery, which I found to be accurate.

The TabPro S runs Windows 10, the first of its Galaxy ilk to do so. I quite liked the user experience, which brings professional gravitas to the two-in-one. In particular, I enjoyed having access to features such as Microsoft’s voice assistant Cortana, Snap Assist, and the ability to stream Xbox One content. 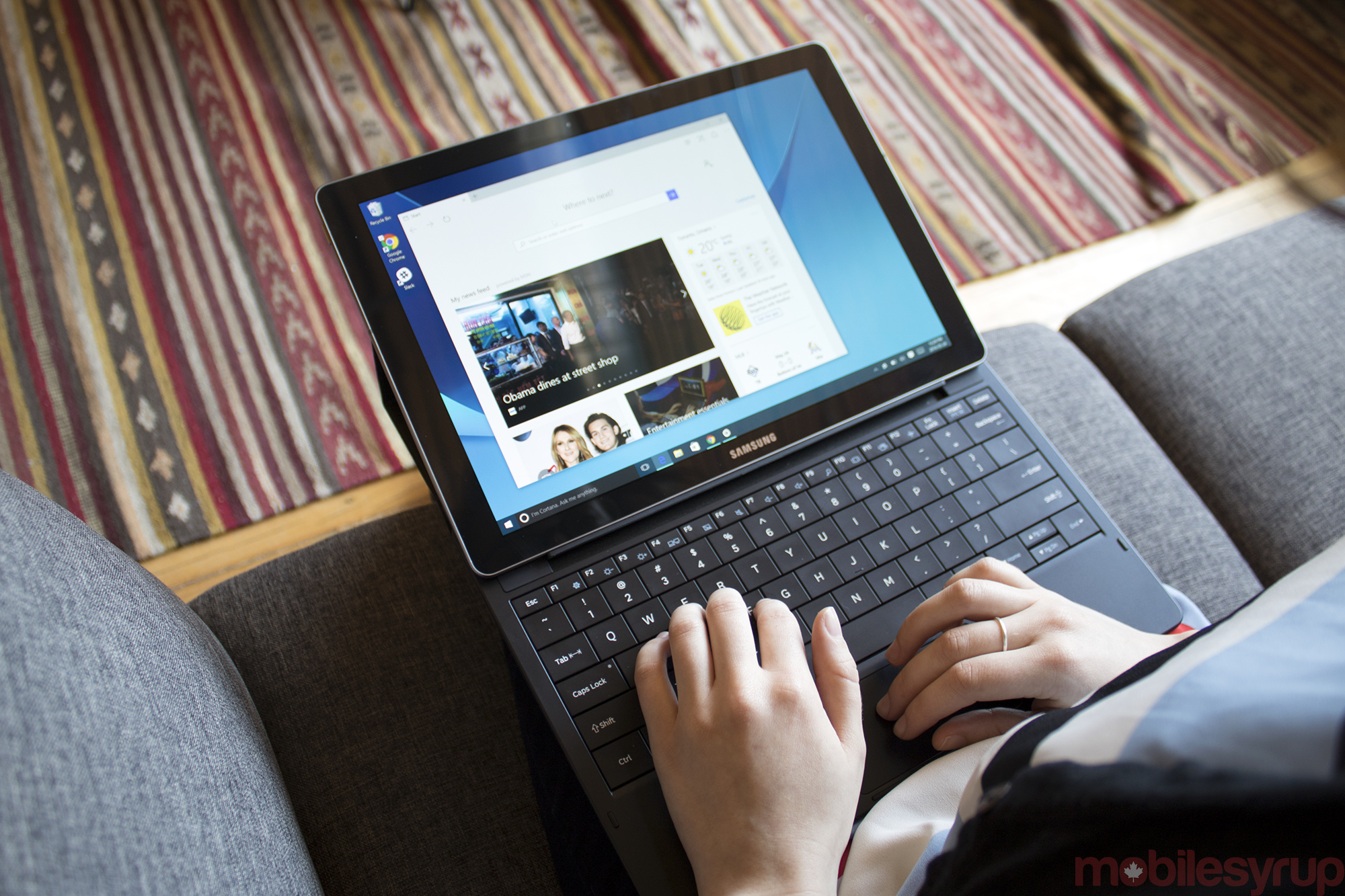 Snap Assist, which allows you to pin different windows in set positions on your screen and use them simultaneously, is useful but undoubtedly works better with the Universal Windows Apps than third-party apps, which sometimes have to be resized or take too long to snap in place. Similarly, Edge, the Internet Explorer reboot, works a lot more smoothly than Chrome.

One of the most important aspects of any device is the price, but it’s perhaps especially important for the TabPro S as it stakes out its place in the market. To my mind, its best bet would be positioning itself as an attractive prospect for the mid-range buyer.

But while the price in the U.S. might back up that idea, here in Canada it does not. 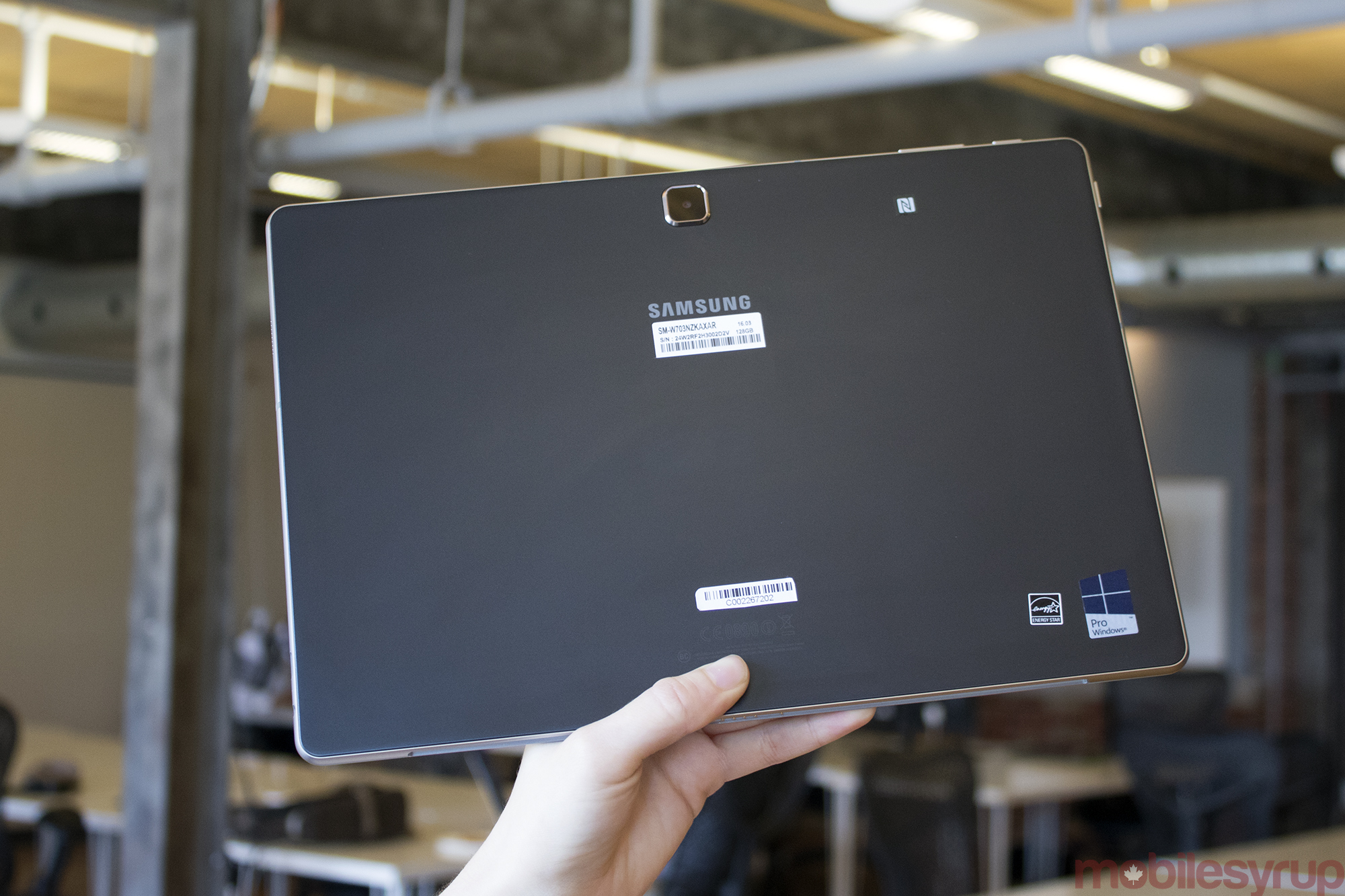 But even if I allow for the idea that Samsung’s plan is not to take a slice of the laptop demographic, but to tap in to the existing two-in-one market, the business case doesn’t make much sense. It’s offering a cut-budget version of the Surface Pro 4, for almost the same price.

That’s $80 more expensive than the TabPro S, which, honestly, is worth it merely in consideration of the better keyboard. 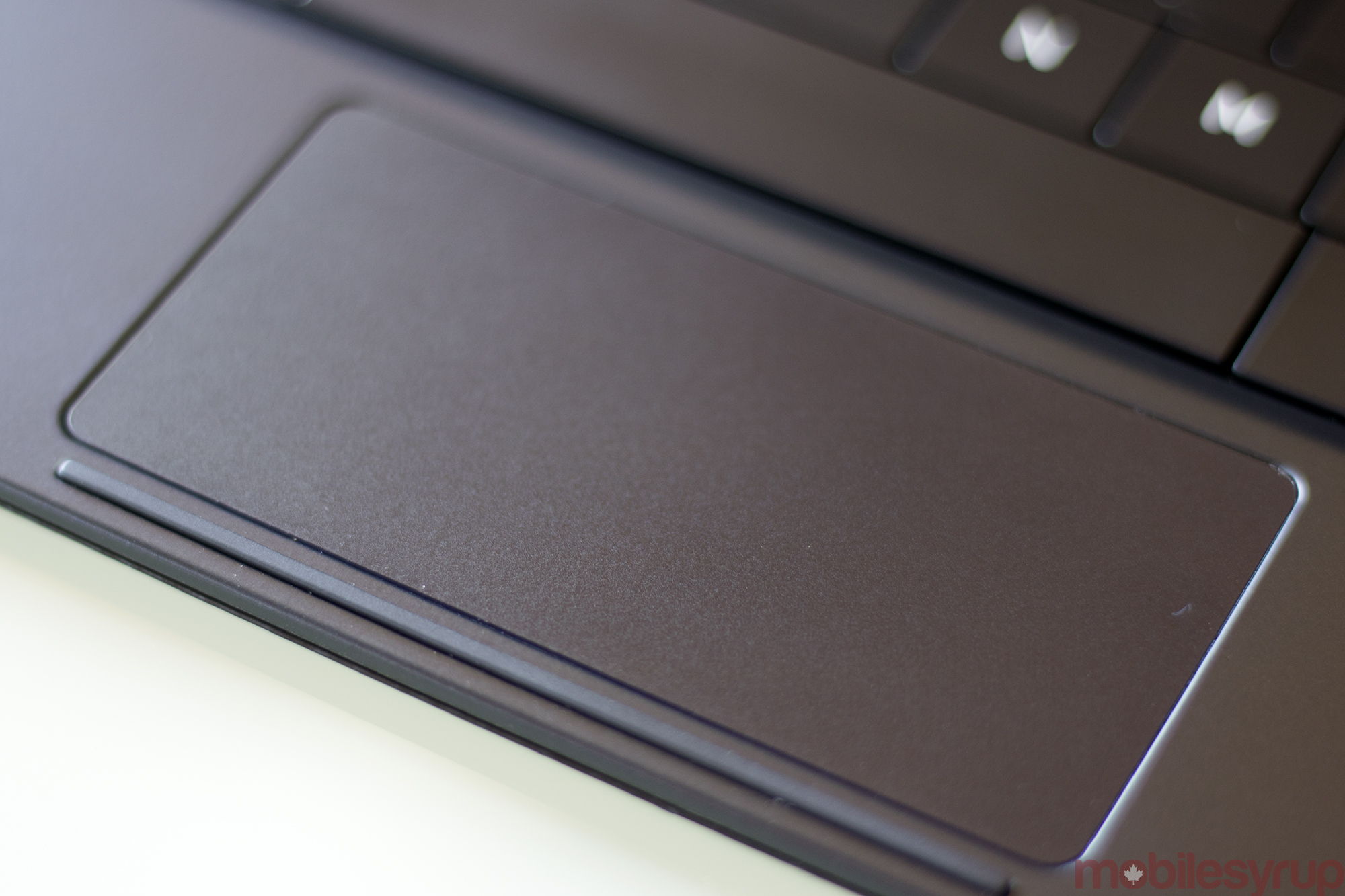 One last thing to keep in mind: for regular use, most people would require a USB-C hub. Samsung’s model comes with HDMI and USB-A plug-ins and retails for approximately $100. The accompanying S Pen is also not included in the box, and is expected to begin shipping later this quarter.

Can it beat the Surface Pro 4? 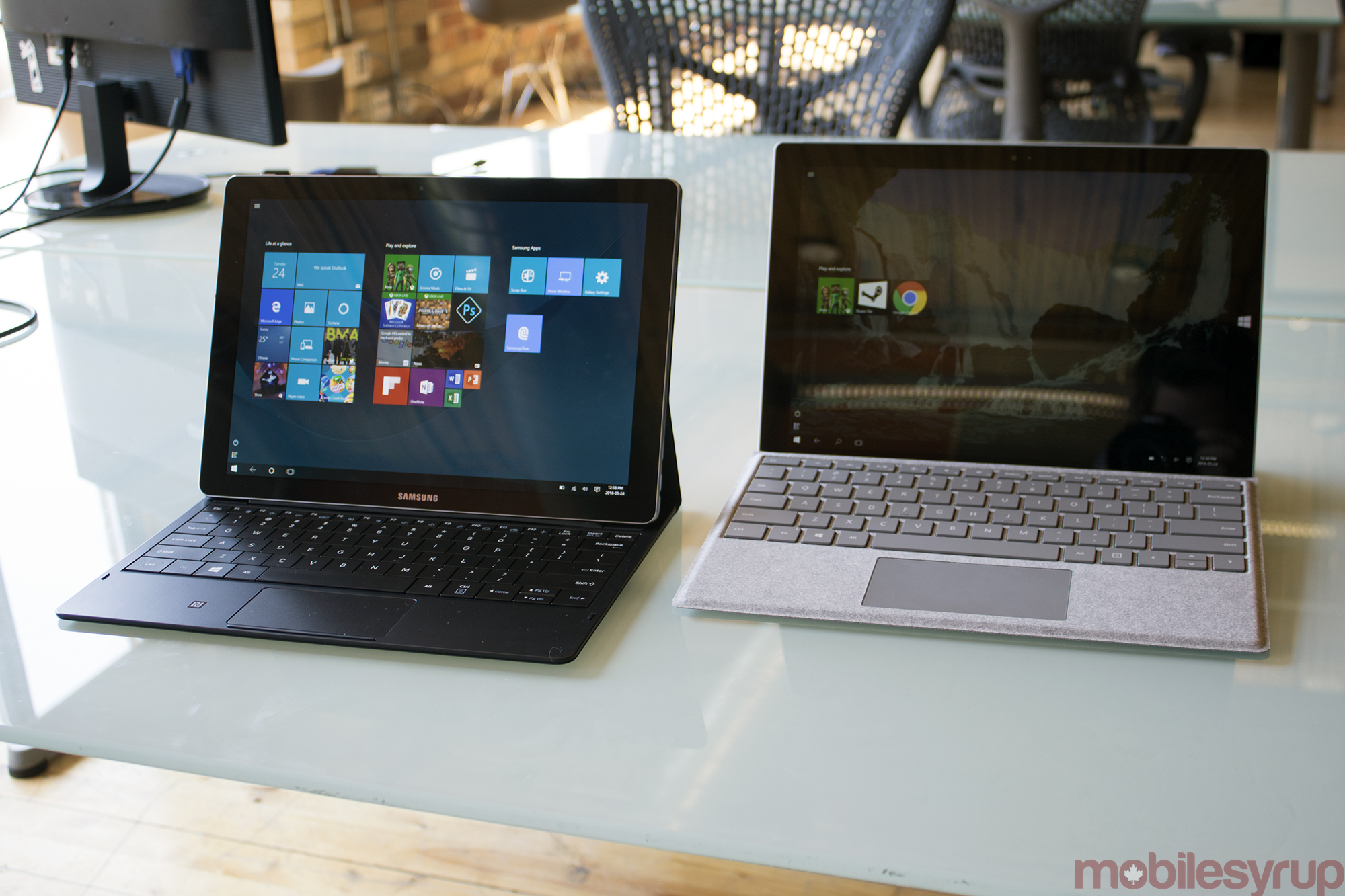 On the left, the TabPro S. On the right, the Surface Pro 4.

After a week with TabPro S my verdict tends towards no. Its rigid form factor makes the TabPro S fall short of two-in-one excellence. My addendum, however, is that it is an impressive first try, and with a retooled keyboard and a lower price point, could certainly give other devices a run for their money as a quality budget option.

As for the future of two-in-ones, it remains difficult for me to see a convincing argument for their value. The current argument is: you get a tablet and a laptop for the price of one. The reality is, because the keyboard is in the protective case, you end up rarely detaching the tablet for solo use, and so end up with a small, subpar laptop for the price of a real laptop.

But that analysis only relates to things as they stand now. Perhaps the entire laptop computing industry will tip towards two-in-ones, ramping up the specs until they become the new normal. If the two-in-one becomes the master of all, I’ll be the first to line up for mine, but the TabPro S certainly brings us no closer to that future. Despite its beautiful screen and decent performance, I’d still have to call it a master of none. 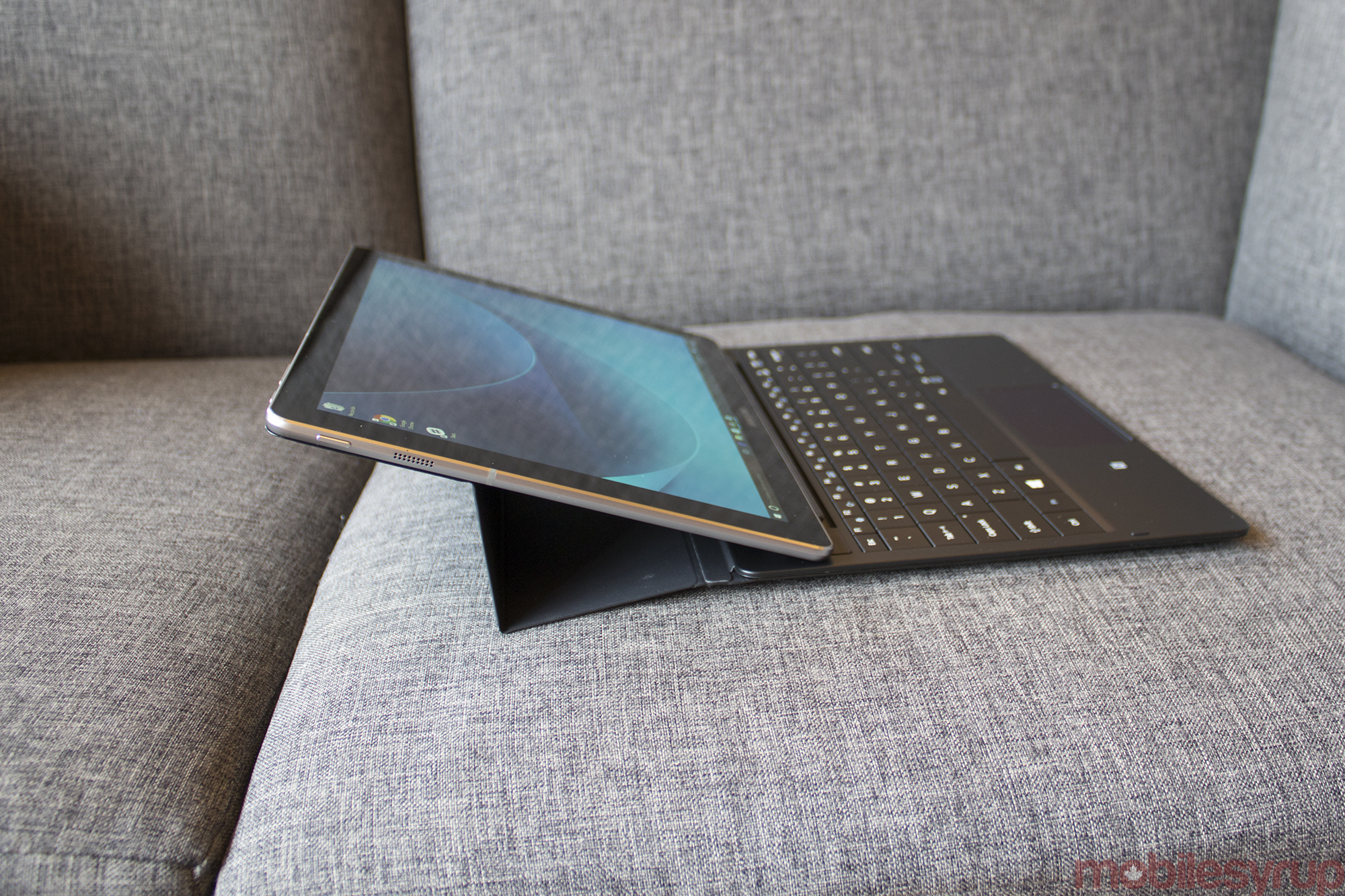