Would you pee in a bottle to keep your job? Amazon employees do

Amazon has placed itself in some hot (yellow) water with a series of tweets from an executive and from a company Twitter account denying that employees urinate in bottles — a common practice the company knows about, according to leaked internal documents.

The leaked documents come courtesy of Ken Klippenstein, an investigative reporter and top-tier poster. If you haven’t heard of him, he’s the legend responsible for the incredible John Sims tweet as well as a glorious Twitter exchange with Elon Musk. Posting aside, Klippenstein has earned a reputation for getting incredible scoops through leaked documents, now including Amazon internal documents and emails directly referencing employees urinating in bottles and also defecating in bags published on The Intercept.

As so often happens now, things started off with a really bad tweet. U.S. Senator (and chair meme legend) Bernie Sanders was set to speak in Bessemer, Alabama to support the unionization drive by local Amazon employees. Amazon executive Dave Clark tweeted that Amazon was the “Bernie Sanders” of employers, writing that “if you want to hear about $15 an hour and health care, Senator Sanders will be speaking downtown. But if you would like to make at least $15 an hour and have good health care, Amazon is hiring.”

1/2 You don’t really believe the peeing in bottles thing, do you? If that were true, nobody would work for us. The truth is that we have over a million incredible employees around the world who are proud of what they do, and have great wages and health care from day one.

The company’s official ‘Amazon News’ Twitter account replied to Pocan’s tweet, writing “nobody would work for us” if it were true that employees had to urinate in bottles. Except people do work for Amazon, in some cases because they may not have any other choice, and they do urinate in bottles — Vice found the pee bottles.

Klippenstein spoke to several Amazon employees who described the common practice of peeing in bottles, some of which provided internal documents that show management knew about the practice and did nothing to alleviate the cause. One “Amazon Confidential” document from January detailed various employee infractions, including “public urination” and “public defecation.”

Another document showed an email sent by an Amazon logistics area manager from last May asking drivers not to return bags to the station “with poop inside.” 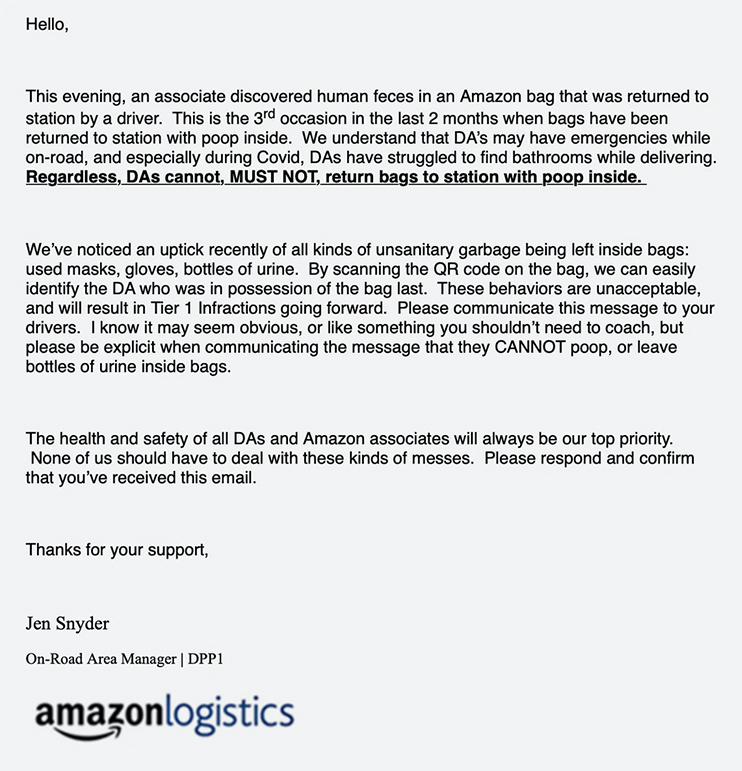 Klippenstein also spoke with current and former employees about the practice. One explained that employees are “literally implicitly forced to do so, otherwise we will end up losing our jobs for too many ‘undelivered packages.'” Another employee explained that although Amazon gave drivers 30-minute paid breaks, taking a break meant they wouldn’t be able to finish their work. Worse, when management became aware of the practice, instead of easing quotas so workers wouldn’t need to urinate or defecate in bags, the company increased package and stop counts “substantially.”

“Every single day of my shift, I have to use the restroom in a bottle to finish my route on time. This is so common that you’ll often find bottles from other drivers located under seats in the vans. … The fact that Amazon would tweet that is hilarious,” another employee said.