Dyson launched two of its latest wireless home vacuum offerings in Canada earlier this month, the V15 Detect Total Clean and the Omni-Glide. I’ve been testing out the V15 Detect for the past two weeks, which Dyson claims is the most powerful and intelligent wireless vacuum it’s ever released.

Give it a green light 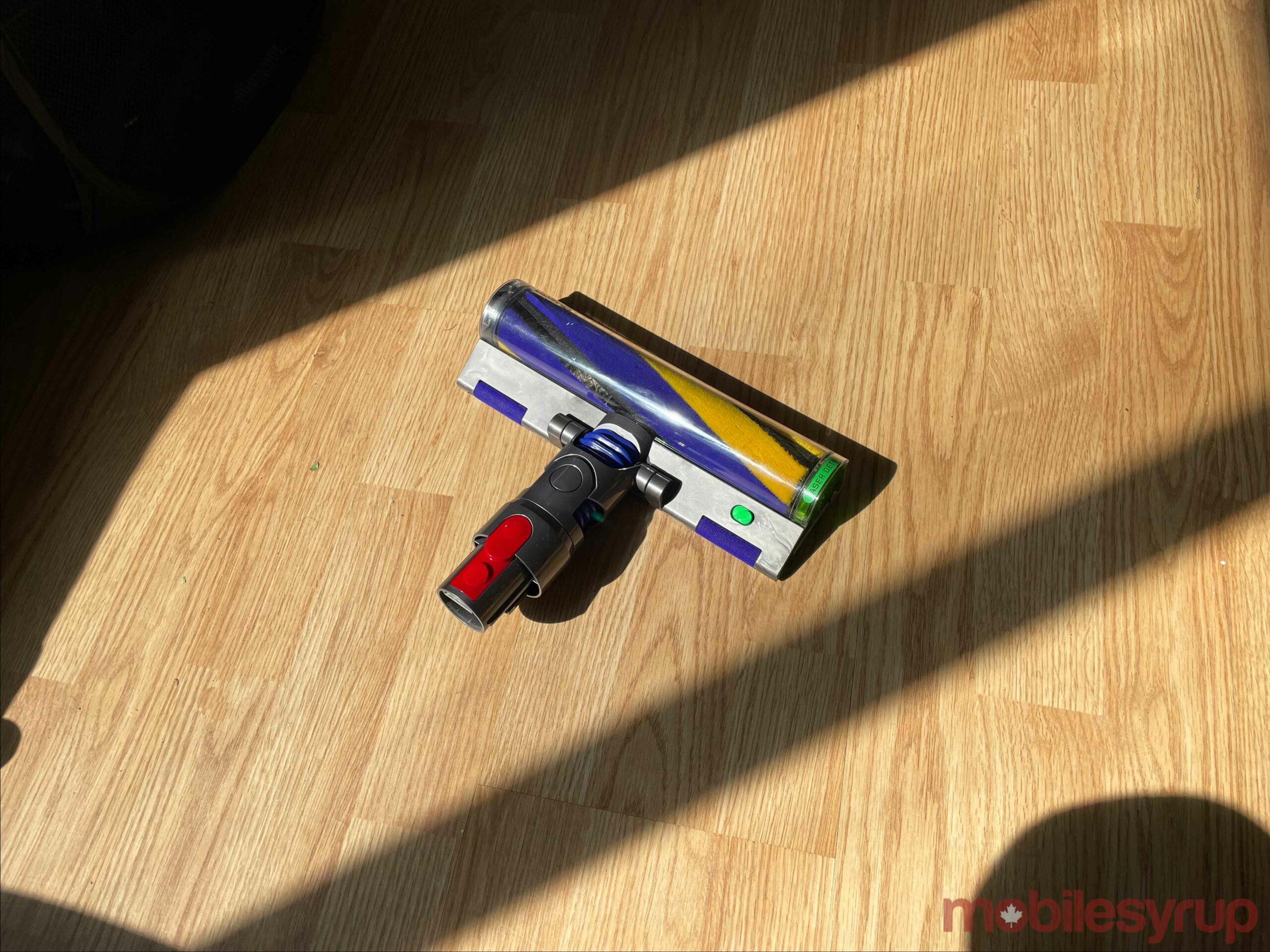 The new V15 Detect Total Clean comes with seven attachments for different surfaces, though the one that Dyson is likely most proud of is the Laser Slim Fluffy Cleaner Head.

Several companies, most notably Shark, make vacuums with built-in LED lights that aim to illuminate dust and make the cleaning process easier. Still, all they do is light up the dust and the surface underneath it, which can make it harder to spot dirt on the illuminated floor. What Dyson has done with its laser cleaner head is a little different.

The laser head emits a green light that works to enhance the contrast on your hard floor surfaces and illuminate the unwanted dust and debris. Dyson’s reasoning behind choosing the colour Green is that it’s eight times brighter than any other colour to the human eye. Further, the laser is also angled in such a way that it only illuminates the particles on the surface, not the surface itself. 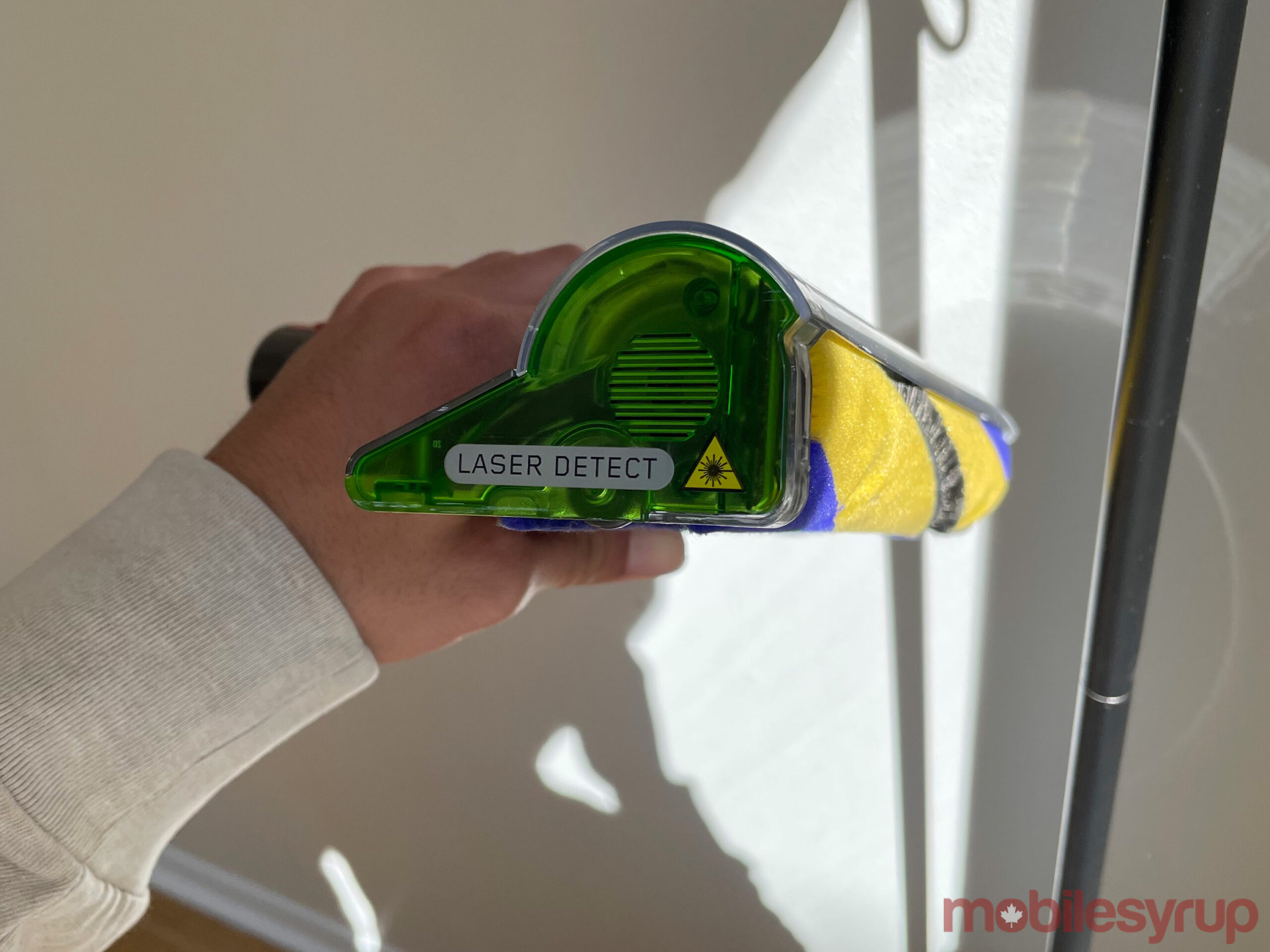 In my experience, the Laser Slim Fluffy Cleaner Head works great and illuminates dust that would otherwise go unnoticed, but its true potential shines when it’s used on very dark or light-coloured, hard surfaces. Additionally, while the laser is helpful to pinpoint dust and debris, it works the best in dark rooms, as the laser fails to impress in well-lit spaces.

I found myself shutting the blinds just to get the most out of the laser head, which is kind of ridiculous when you take a step back and think about it.

“With a bit of tweaking in the laser’s intensity to make it more useful in well-lit rooms, it could be a genuinely useful development in the world of home cleaning.”

Dyson claims that the laser is ‘Class 1,’ meaning it’s virtually harmless to humans and pets, though the company says not to stare into it directly. The laser also doesn’t have a significant impact on the battery.

According to a Dyson spokesperson, if the machine runs for 60 minutes, the amount of battery the laser uses will account for a second of the power consumed by the vacuum. But for added convenience, the laser light features a dedicated on/off button on the fluffy head. 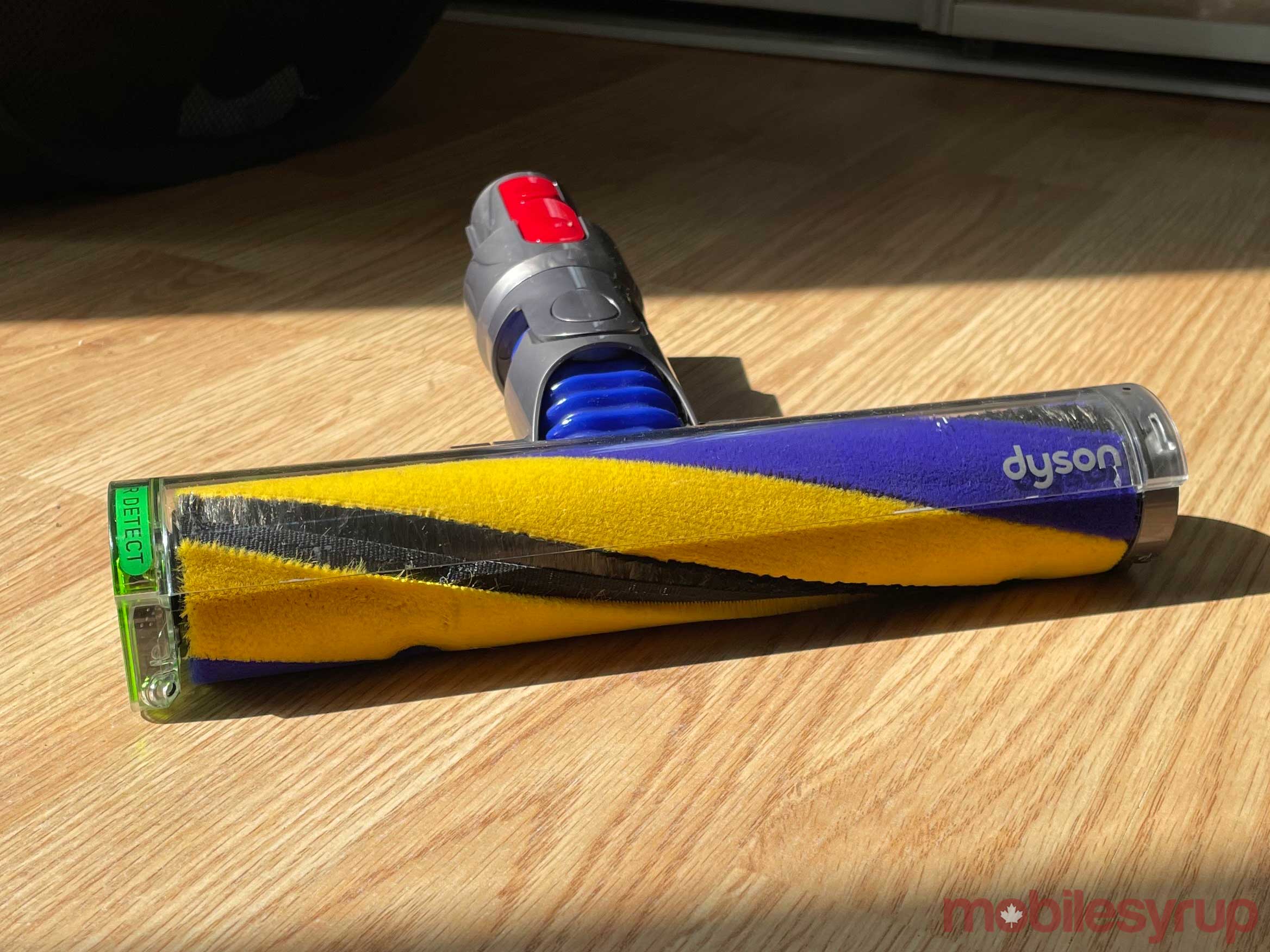 Overall, the new ‘Laser Slim Fluffy Cleaner Head’ is a step in the right direction for Dyson. With a bit of tweaking in the laser’s intensity to make it more useful in well-lit rooms, it could be a genuinely useful development in the world of home cleaning. 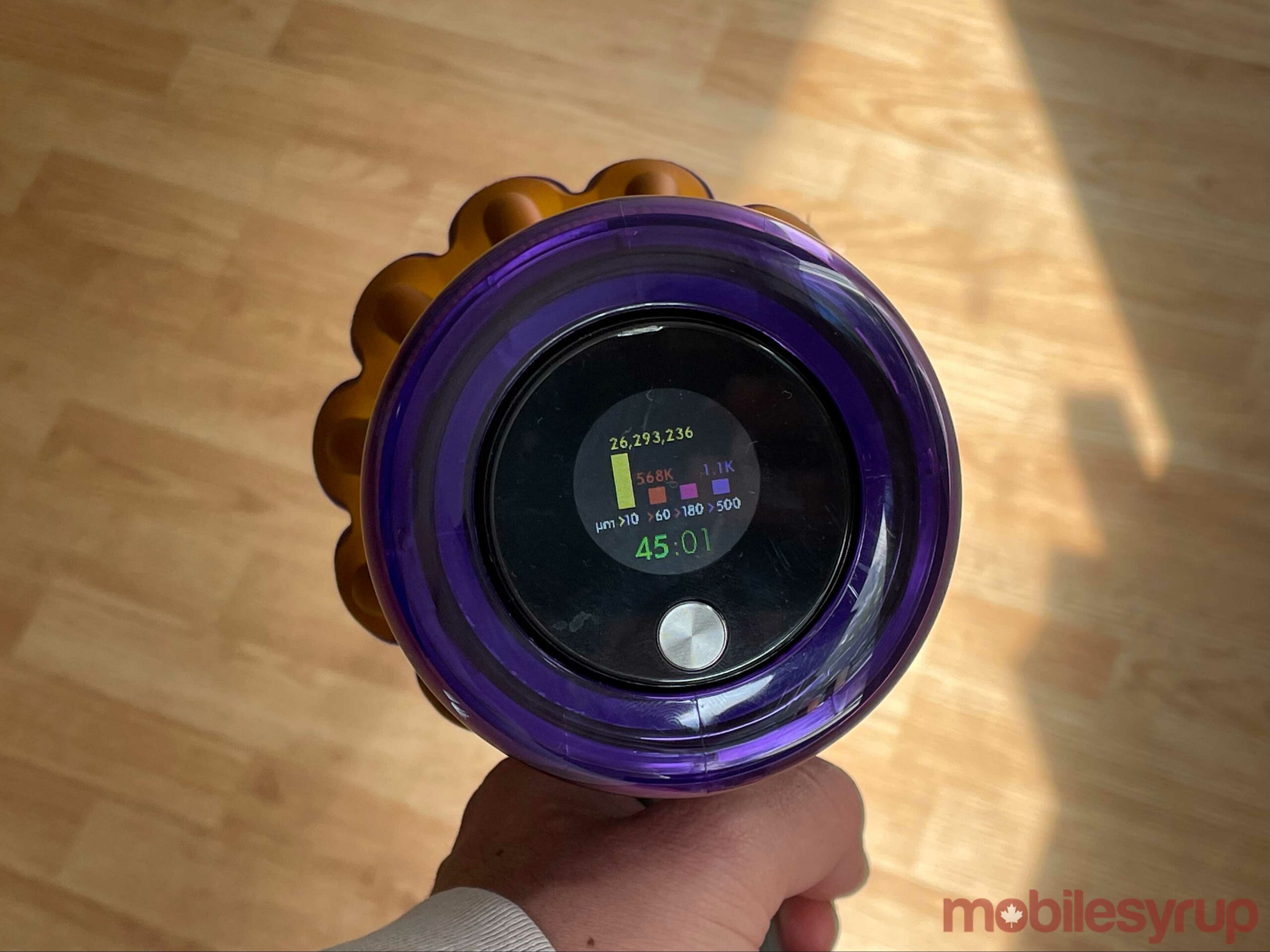 “Wow! The Laser Head helped reveal so much hidden dust and debris in my house. If only there was a way for me to quantify it,” said no one ever, but Dyson still has an answer for this.

Similar to the older V11 Torque Drive and Outsize models, the V15 Detect features an LCD screen built into the vacuum. What’s new is that the vacuum quantifies, categorizes and displays the dust/debris you’ve just picked up on the screen.

The vacuum, or the Piezo to be exact, detects the dust particles hitting the sensor in the form of vibrations and converts it into an electrical signal, enabling the V15 Detect to adjust its power accordingly. While you’re vacuuming, the handheld’s LCD screen showcases the count and size of the particles it sucks up.

The dust and debris are displayed in four categories, distinguished by the size of the dust collected. The sizes are recorded in μm (micrometre, or more commonly, micron). 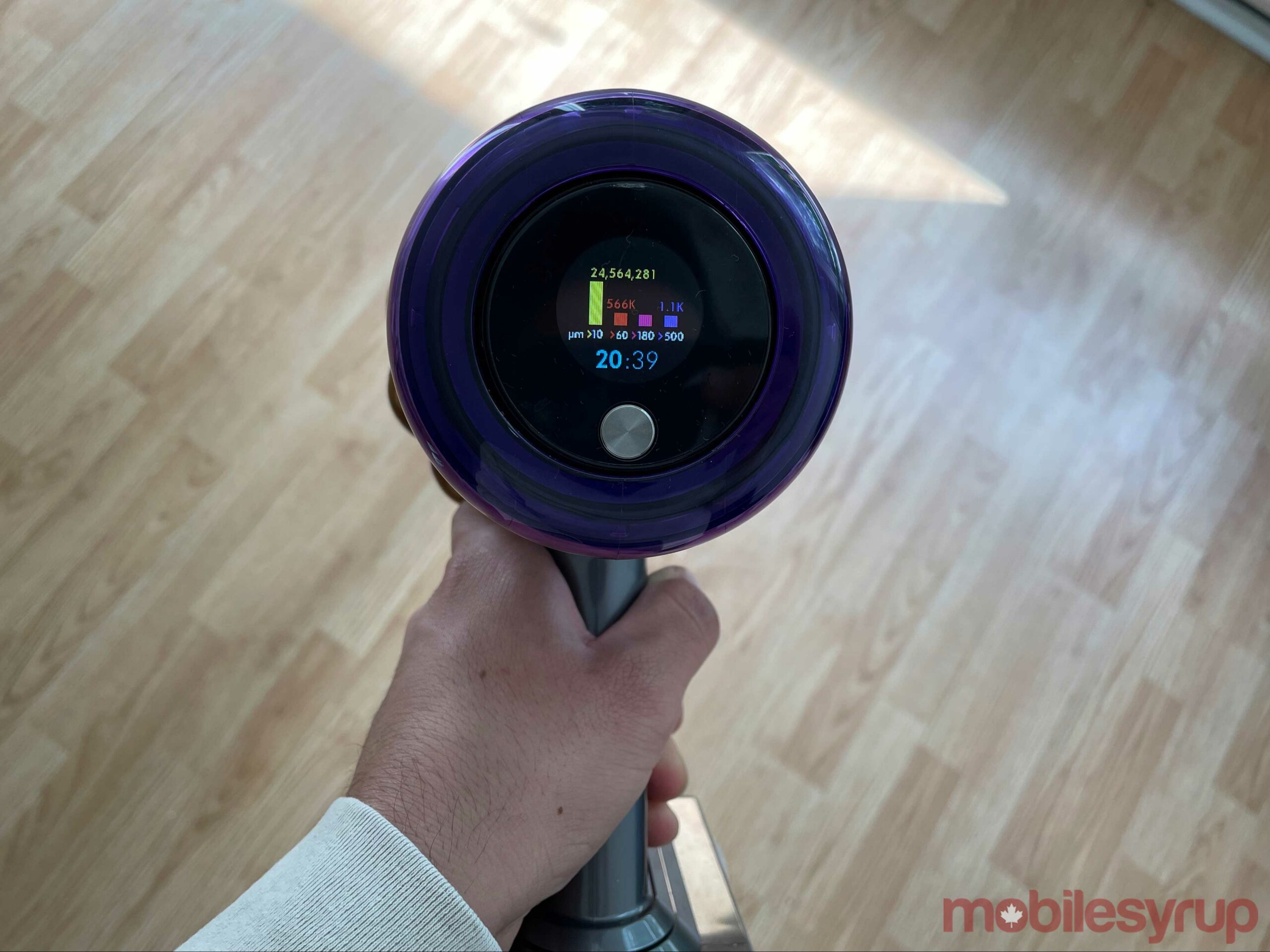 While there’s no way for me to check whether the numbers showcased are accurate, I did test the vacuum with different-sized particles.

While this is a great visual representation of what’s being sucked up, or how dirty your house is, I feel like it’s just a way of Dyson telling its competitors, “look what we can do,” and the feature doesn’t necessarily make or break the V15 Detect. Also, the feature loses its charm after about a week or two of usage. 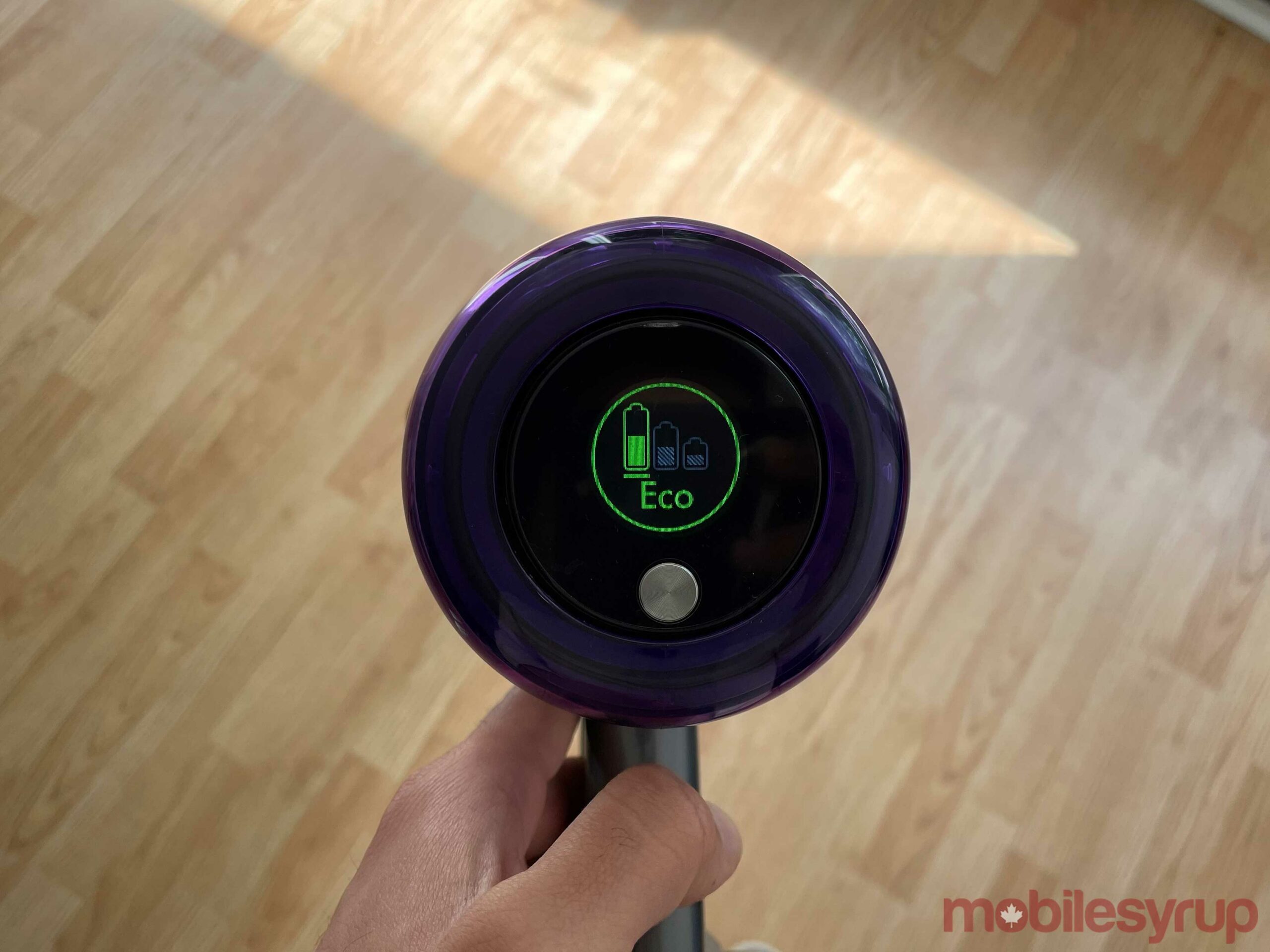 In addition to the dust categorization, the LED screen is also your control hub where you can change the vacuum’s power modes, check how much juice is left, which is displayed with a countdown showing you how much time you have left before the battery runs out and also gives you alerts when maintenance is required.

One major drawback with any wireless vacuum is battery life, but Dyson seems to have avoided the run-time problem.

I am impressed with the V15 Detect’s run-time, though it differs depending on the mode you’re using.

When using ‘Eco Mode,’ the V15 will compromise on suction power but lasts more than an hour. I tested the vacuum with 100 percent battery and was able to clean my house and my car and still had 20 minutes of Eco Mode run time left.

I feel I haven’t used the V15’s ‘Boost Mode’ enough. This isn’t because I don’t want to, though — I just haven’t had the need to (plus, the vacuum sounds like a jet engine when on Boost). The Eco Mode does a good enough job of picking up non-stubborn dust all while offering a higher run time. In contrast, at 100 percent battery, Boost Mode offers seven minutes and thirty seconds of high-powered cleaning, which is just not enough time.

“Once the surface is clean, the vacuum lowers its suction power to conserve battery.”

The ‘Medium Mode’ offers the best of both worlds and meets my needs. The setting features slightly less suction than the Boost Mode but offers a much higher run time. At 100 percent, the Medium Power Mode delivers about 40 minutes of decent-suction cleaning, which is more than enough for a two or three-bedroom home. For people with bigger houses, you can buy an additional battery from Dyson ($199.99) and get double the run time with any mode.

Additionally, the vacuum features an ‘Auto Mode’ that is enabled only when you’re using the Laser Slim Fluffy Cleaner Head, High Torque Anti Tangle Comb or the Anti Tangle Screw. This mode increases the vacuum’s suction power when the machine detects a large amount of dust or debris. Once the surface is clean, the vacuum lowers its suction power to conserve battery.

The High Torque Anti Tangle Comb is similar to its predecessor Torque Drive. In addition to automatically detecting the amount of dust and adjusting its power accordingly, it also features Dyson’s new anti-tangle technology. The head itself has polycarbonate teeth built inside that skim through the head’s brushes to pull out any hair that might be stuck on the brush bar.

Further, this head is made for all surfaces, so you don’t need to change the accessory when going from vacuuming a carpet to hard floors. This attachment is great for people with long hair or pets. 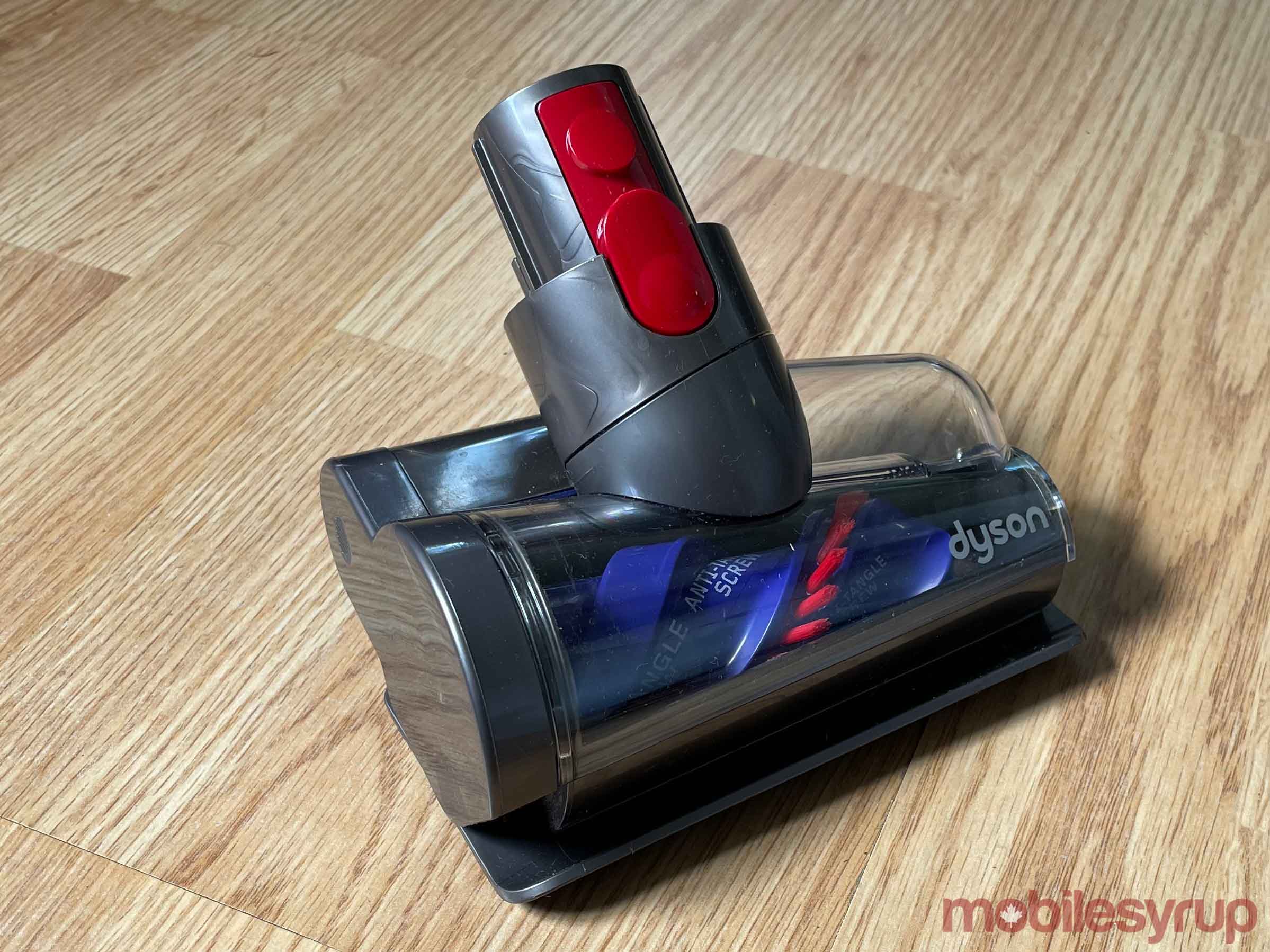 This brand new tool is virtually the same attachment as the High Torque Anti Tangle Comb but isn’t as big. It serves the same purpose but its small size helps it reach tight and narrow areas that the High Torque can’t.

The ribbed and conical rotating brush bar spins and pushes the hair inside the bin, allowing for the head to remain tangle-free. I tested this out with strands of thread and the head worked the way it is intended to with no stands left stuck on the brush bar. 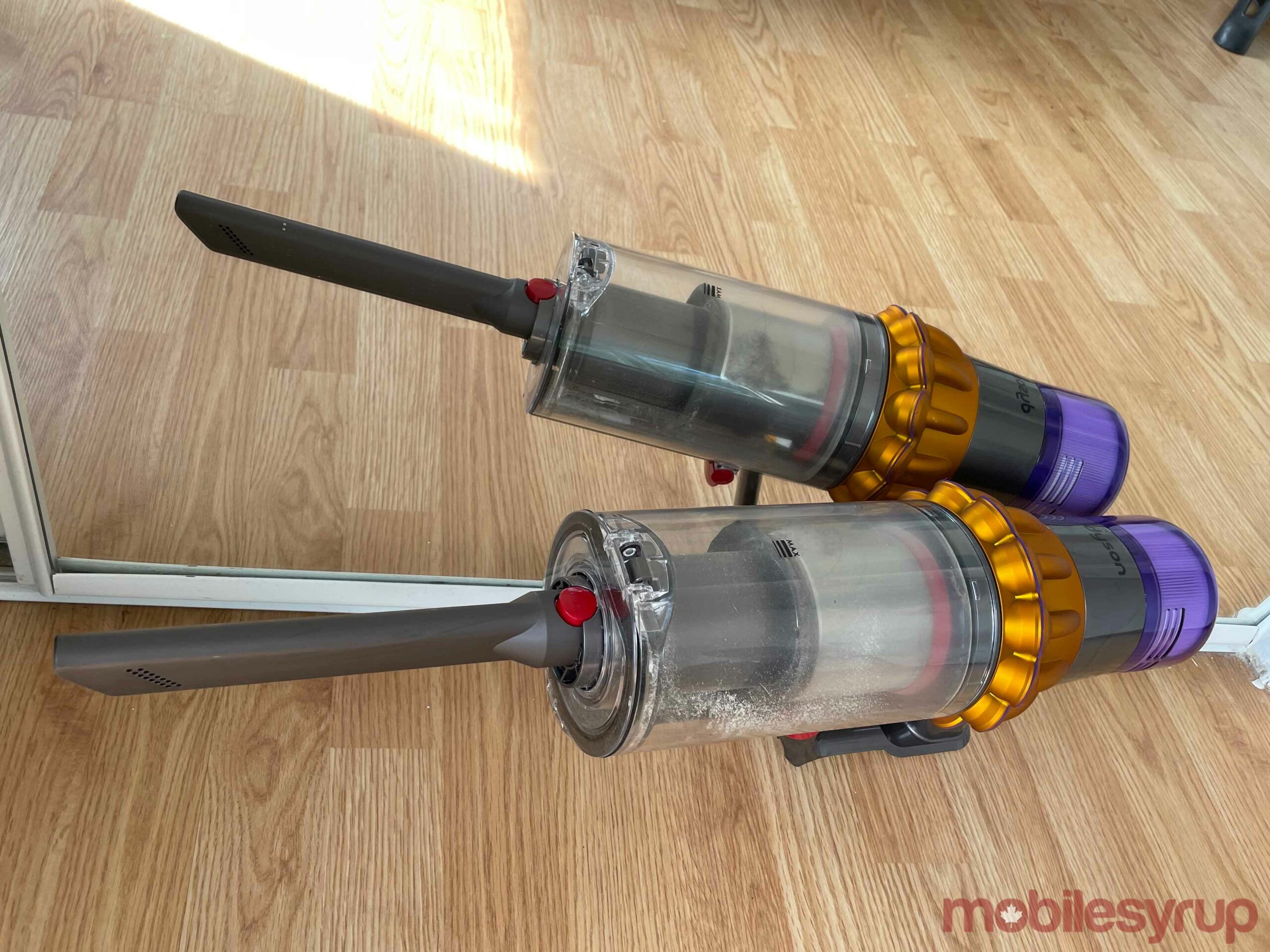 The Crevice Tool is my best friend. It has made cleaning tight and narrow spots in my car so much easier and convenient. The tool is a long and narrow pipe that is great for cleaning hard-to-reach edges and narrow gaps like under car seats, behind the couch or behind my desk.

That said, if it had a laser of some sort to see what’s hiding in those narrow places, the tool would have been so much more useful. 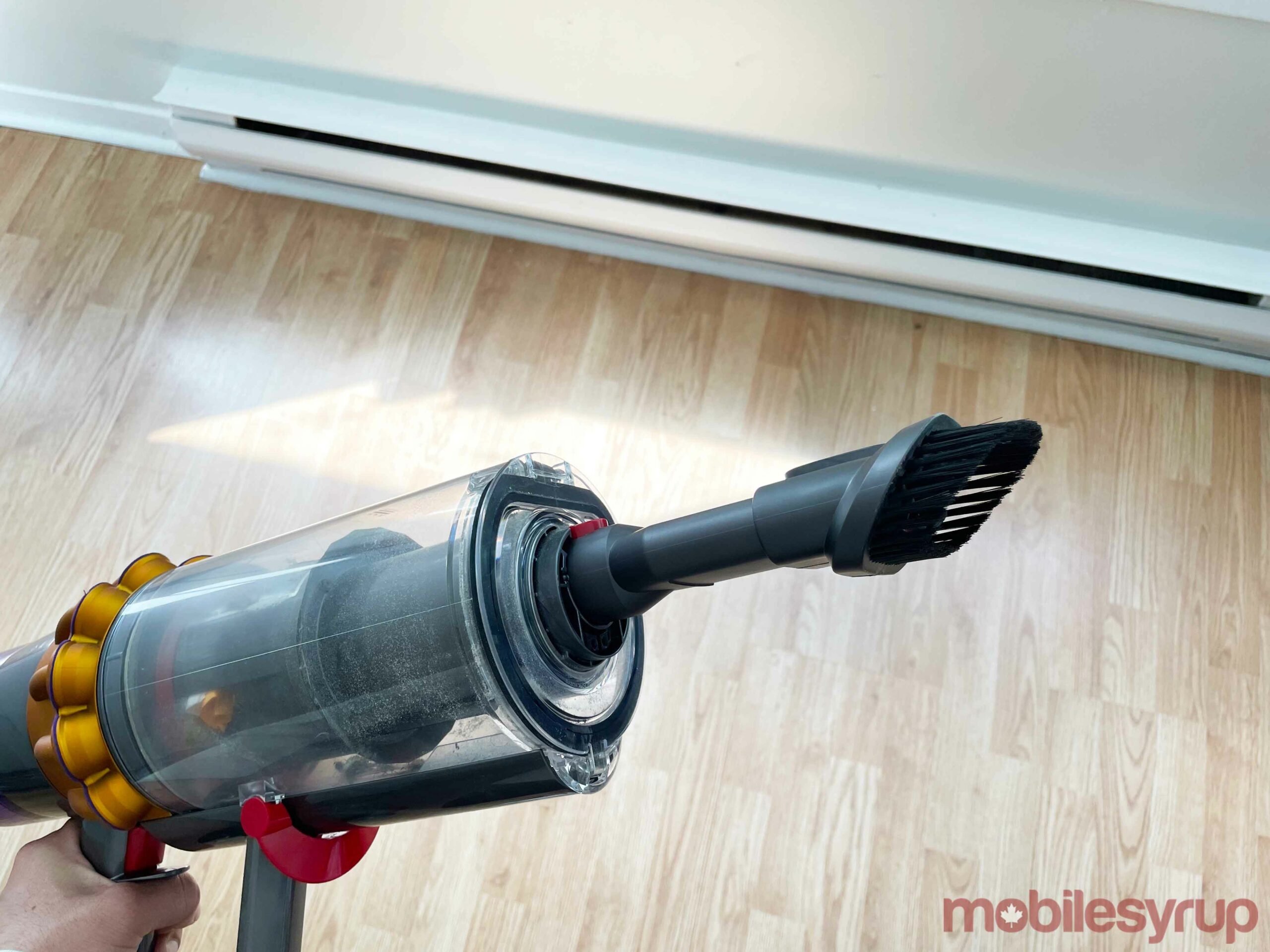 The combination tool is similar to the crevice tool but with added bristles. The tool has a built-in slider that you can use to bring the bristles forward or backwards. The bristles can then be used as a dusting brush to loosen dirt or debris, which is then sucked in.

This tool serves the same purpose as the Combination tool, but its bristles are placed further apart from each other. Additionally, the bristles are also firmer, making it easier to scrape off stubborn dirt which might be stuck on your mats or fabrics.

I used this tool to clean off my car’s foot-mats laden with salt from last winter. Using the firm bristles helped me scrape off the salt, which was sucked up by the vacuum. 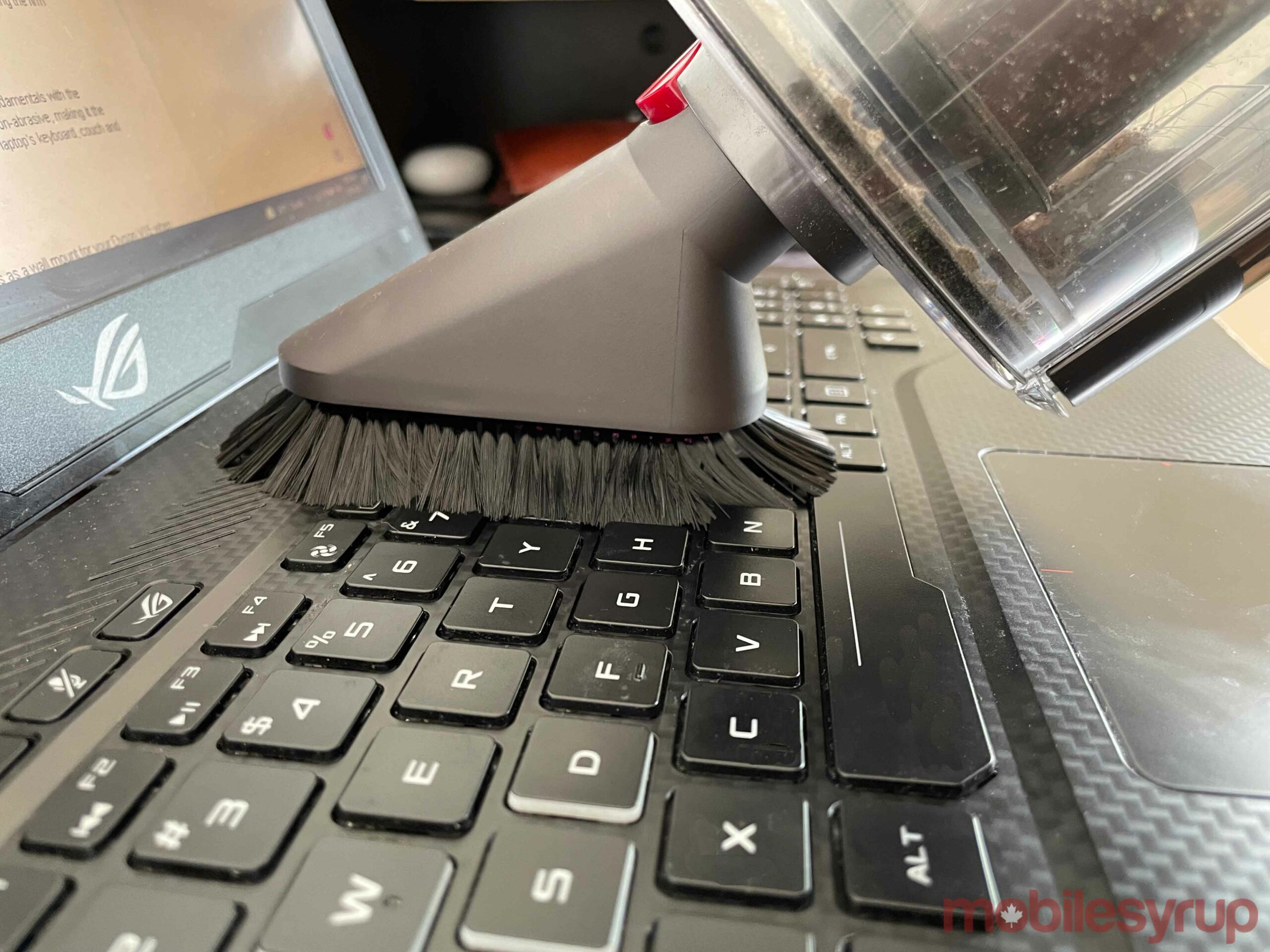 Lastly, we have the mini soft dusting brush. This attachment shares several fundamentals with the combination tool.

However, its bristles are considerably softer and non-abrasive, making it the perfect cleaning head for spots that need gentle cleaning, like your laptop’s keyboard, couch and even pillows.

The package comes with a docking station that works as a wall mount for your Dyson V15 when it’s not in use. The box also has a charger that can be used separately or while attached to the docking station.

The machine has virtually no recurring costs. The only thing you’ll need to pay attention to is the HEPA filter attached to the back end of the handheld. A thorough cleaning of the HEPA filter with a wet cloth once in two weeks would suffice.

The V15 Detect Total Clean features a decent-sized 0.45 litre/0.12-gallon bin compartment that can easily store a house-full of vacuumed dust. It is transparent and also has a “bin full” indicator, allowing you to empty it whenever the need arises.

The vacuum weighs in at 3.08kg (6.8lbs) and measures 45.28-inches in height, 9.84-inches in width and 10.5-inches in length/depth, the lightweight, compact size and high run-time make the machine a tremendous portable vacuum cleaner.

Is it worth it?

If you’re someone who wants a no nonsense wireless vacuum cleaner with state-of-the-art features, high-grade battery life and powerful suction and can afford to shell out almost a rack, the Dyson V15 Detect Total Clean is for you.

If the strong suction power of Dyson’s V15 Detect is what speaks to you and you don’t really care about the less vital laser detection and particle counting features, you can easily find a vacuum with a cheaper price tag.

The V15 Detect Total Clean is now available in Canada at Dyson Demo stores in Toronto, Vancouver and Calgary. You can also pick the smart vacuum up at Dyson’s website for $949.99.

"If you’re someone who wants a no nonsense wireless vacuum cleaner with state-of-the-art features, high-grade battery life and powerful suction and can afford to shell out almost a rack, the Dyson V15 Detect Total Clean is for you"