It may not have won any Game Awards, but Psychonauts 2 deserves much more recognition

After three-plus hours of ads and celebrities, The Game Awards 2021 concluded with It Takes Two snagging the coveted Game of the Year (GOTY) title.

This was a pleasant surprise, especially since it’s a smaller game made by the indie studio Hazelight, with publishing support from EA. Plus, how can you not love co-writer/director Josef “f*** the Oscars!” Fares? And beyond It Takes Two, there were some well-deserved wins in other categories, like Marvel’s Guardians of the Galaxy (from Canada’s own Eidos Montreal, no less!) taking home Best Narrative or Best Action-Adventure going to Metroid Dread.

But now that the dust has settled, I find myself lamenting that no love was shown to Psychonauts 2, which was up for five awards, including GOTY. To take nothing away from Hazelight’s genuinely earned win, I wish Psychonauts 2 got more attention.  Developed by LucasArts alum Tim Schafer’s Double Fine studio, Psychonauts 2 is easily one of the best games of this year. Although it came out in August, I only just finally beat it late last month, and I’m so happy I did.

Much has been said about the “AAA” gaming industry. In the same way that Hollywood is dominated by superheroes and other sequel-friendly blockbusters, many of the biggest games are action-packed, combat-focused experiences. Whether it’s presented in a realistically violent way (Call of Duty) or Looney Tunes-esque cartoonish mayhem (Fortnite), violence is at the heart of the majority of games. Now, I’m not someone who thinks violence in games is in any way harmful — that’s ridiculous — but it does sometimes leave me wanting for more variety.

That’s where Psychonauts 2 comes in. While It Takes Two certainly deserves credit for its emphasis on inventive cooperative gameplay, Psychonauts 2 is still the most wonderfully unique game I’ve played this year. If you’re unfamiliar, the Psychonauts games follow Razputin, a young acrobat who learns how to use his psychic abilities to protect the world. In terms of gameplay, Psychonauts 2 is a platformer that features a lot of exploration that’s fuelled by such fancy psychic powers as telekinesis, pyrokinesis and time manipulation. To be sure, there’s no shortage of games that allow you to be heroic, but the ways in which Psychonauts does this are genuinely brilliant. 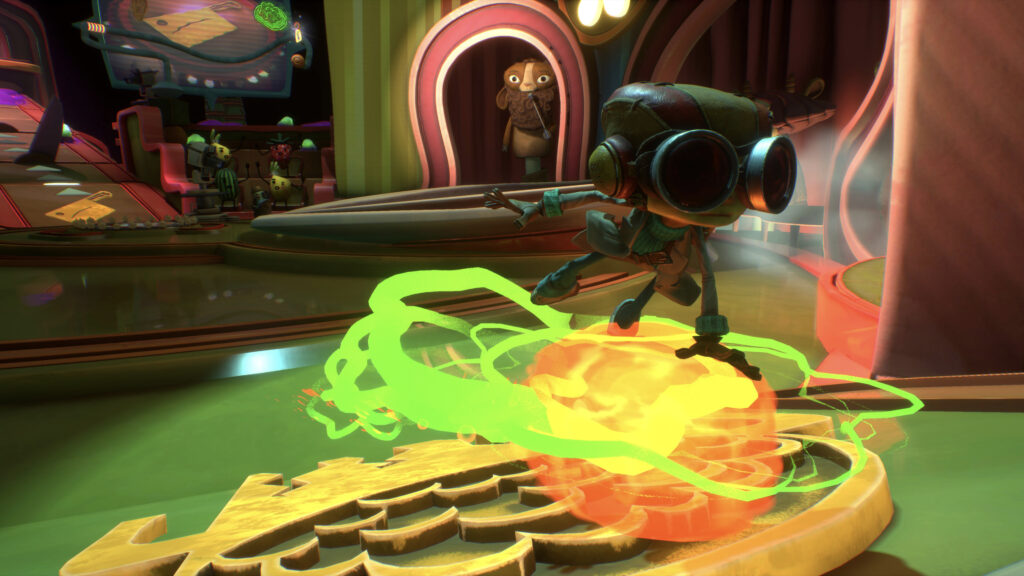 Basically, Psychonauts 2 is all about empathy. This was also an element of the first game, but it was, as writer-director Schafer told me, not wholly intentional. For Psychonauts 2, Double Fine worked closely with mental health experts like Take This to offer a more sensitive depiction of common struggles. What I adore most about Psychonauts 2 is how it treats all of its characters. If Ted Lasso was the TV show all about believing in the good in your fellow man, Psychonauts 2 is exactly that in the video game space. Every antagonist in the game has nuance.

By going into their minds, you can, quite literally, unpack everything that’s led them to be the way they are. Why does your brusk teacher Hollis, a once-promising doctor, harbour a gambling addiction? What’s caused the eccentric Psychonauts founder Ford Cruller to develop dissociative identity disorder? As I played Psychonauts 2, I was constantly surprised at the hidden layers of each character. That level of care is even extended to the game’s main villain, the mass murderer Maligula, who you come to at least understand and feel sorry for, even if you don’t excuse her actions.

The game dedicates an entire level, cleverly framed as a guided museum tour, to explain her country’s history and, through that, her traumas. As an improvement over the first game, Raz even asks for permission to enter people’s minds, acknowledge that one’s feelings are personal and privacy ought to be respected. In so doing, Psychonauts 2 establishes the need for people to hold honest dialogues to help break the stigma surrounding mental health. 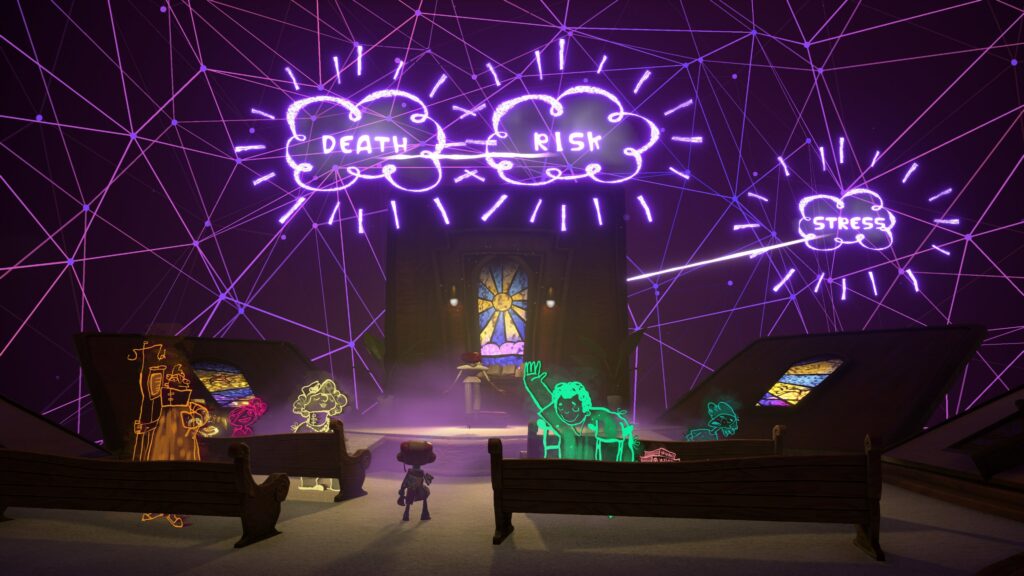 At the same time, Psychonauts 2 balances this with consistently laugh-out-loud-funny banter that’s brought to life through stellar, lively voice acting. Double Fine games are known for this humour, and Psychonauts 2 is no exception. Commendably, though, the humour is never at the expense of the troubled figures whose minds you enter. If anything, it’s usually just good-natured humour surrounding the unfortunate or bizarre scenarios the ever-plucky Raz finds himself in, like his family embarrassing him at Psychonauts HQ or learning what sorts of gross ingredients go into the base’s pancakes.

Of course, writing isn’t everything, but thankfully, Psychonauts 2 excels in other key areas. In fact, a major reason why the storytelling works is due to the outstanding and wildly creative level design. Using its colourful, Coraline-esque art style as a base, each environment in Psychonauts 2 feels so meticulously crafted. When you’re in Hollis’ head, you encounter a delightfully bizarre thematic mash-up between the worlds of medicine and casinos.

In practice, this can result in one instance where you’ll be racing playing card suits across a cardiogram, and another where you deal with the gruff needle overseeing the gambling table. Psychonaut Compton’s brain, meanwhile, portrays his severe anxiety through a frantic cooking game show that sees you running around and using psychic powers to prepare dishes. No other 2021 game outside of Hitman 3 has had such well-designed, varied and memorable levels. 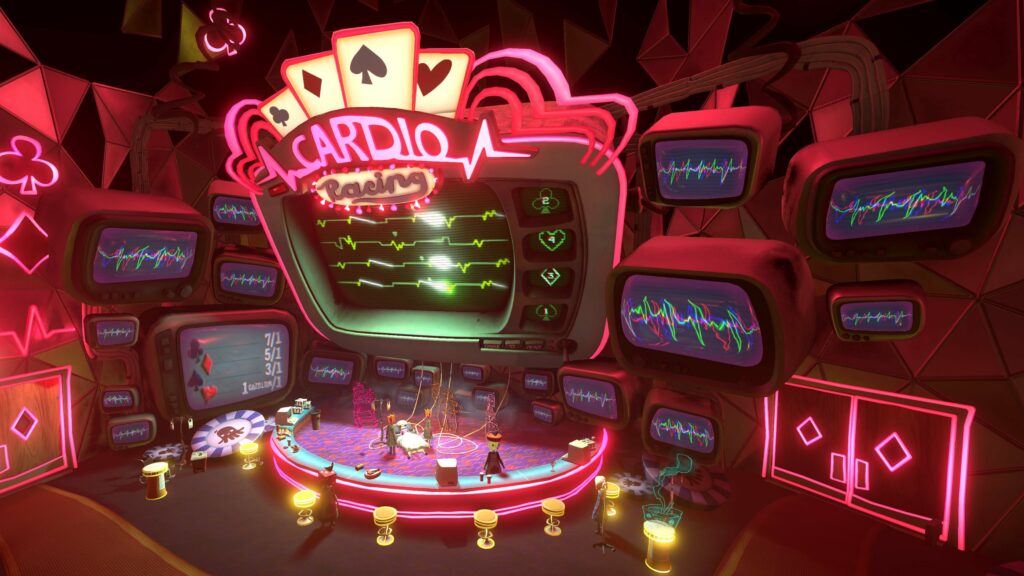 Psychonauts 2 also handles its core gameplay well. Earlier this year, I wrote about how one of the otherwise stellar first game’s few issues was that combat and platforming could feel imprecise and tedious. In Psychonauts 2, every mechanic — like jumping, punching and power selection — has been fine-tuned to be responsive and snappy.

What’s more, Double Fine understands that not everyone is interested in combat. If you so choose, there are a slew of difficulty options offering invincibility, more powerful attacks and more. Sometimes, I just wanted to move on to the next lovingly crafted mental area, so I appreciated being able to toggle “god mode” to quickly get through a regular enemy or boss encounter. That’s not to say they’re not interesting, though. In keeping with the clever ways of demonstrating mental health, you’ll regularly faces foes based on “Bad Ideas,” “Panic Attacks,” and “Doubts.”

If any of that sounds great to you, that’s because it is. In an industry that often feels dominated by shooters, open-world games, and combinations of the two, Psychonauts 2 is an absolute breath of fresh air. The game’s thoughtful approach to mental health alone makes it worthy of immense praise. But even beyond that, the game is just so damn creative and entertaining. From the imaginative level design to sharp writing and psychic power-focused variety of gameplay types, Psychonauts 2 is such a joy. It may have left The Game Awards empty-handed, but it’s the true winner in my heart.

Psychonauts 2 is now available on PlayStation 4, Xbox Series X/S, Xbox One and PC. The game is also a part of Xbox Game Pass.