Microsoft Surface Go 3 Review: Small but not so mighty

The Surface Go 3 can be great if it fits your niche, but doesn’t make sense for most

In 2020, Microsoft released the Surface Go 2 with some welcome refinements over the original mini Surface, such as a slightly larger display and beefed-up specs. It was a small, but good, upgrade.

2021’s Surface Go 3 doesn’t go quite so far, with little more than a processor bump to differentiate it from the Go 2. There’s also a minuscule price drop – the base Go 3 starts at $519 compared to $529 for the Go 2 — but that hardly counts.

Other minor changes include Windows 11 out-of-the-box rather than Windows 10 on the Go 2, and slightly improved battery life. There is precious little that’s new. That’s good news for any Go 2 owners out there, since there’s no reason to upgrade. Unfortunately, it also means many of the issues from the Go 2 remain true with the Go 3.

Ultimately, the Surface Go 3 is a decent little 2-in-1 that can serve as an ultra-portable typing machine and that’s effectively all. 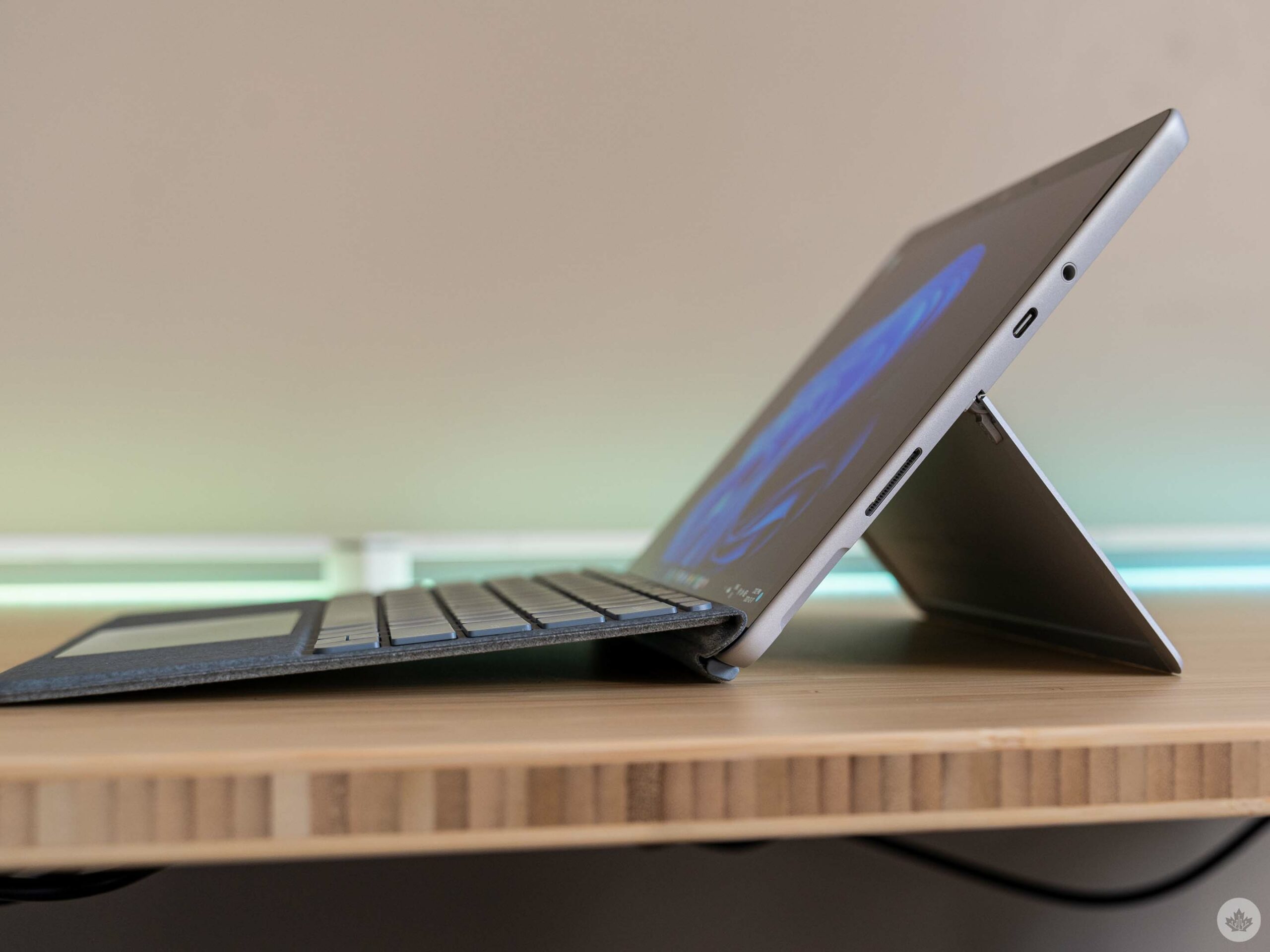 Note: The above specs are for my review unit. You can find a full list of available configurations here. 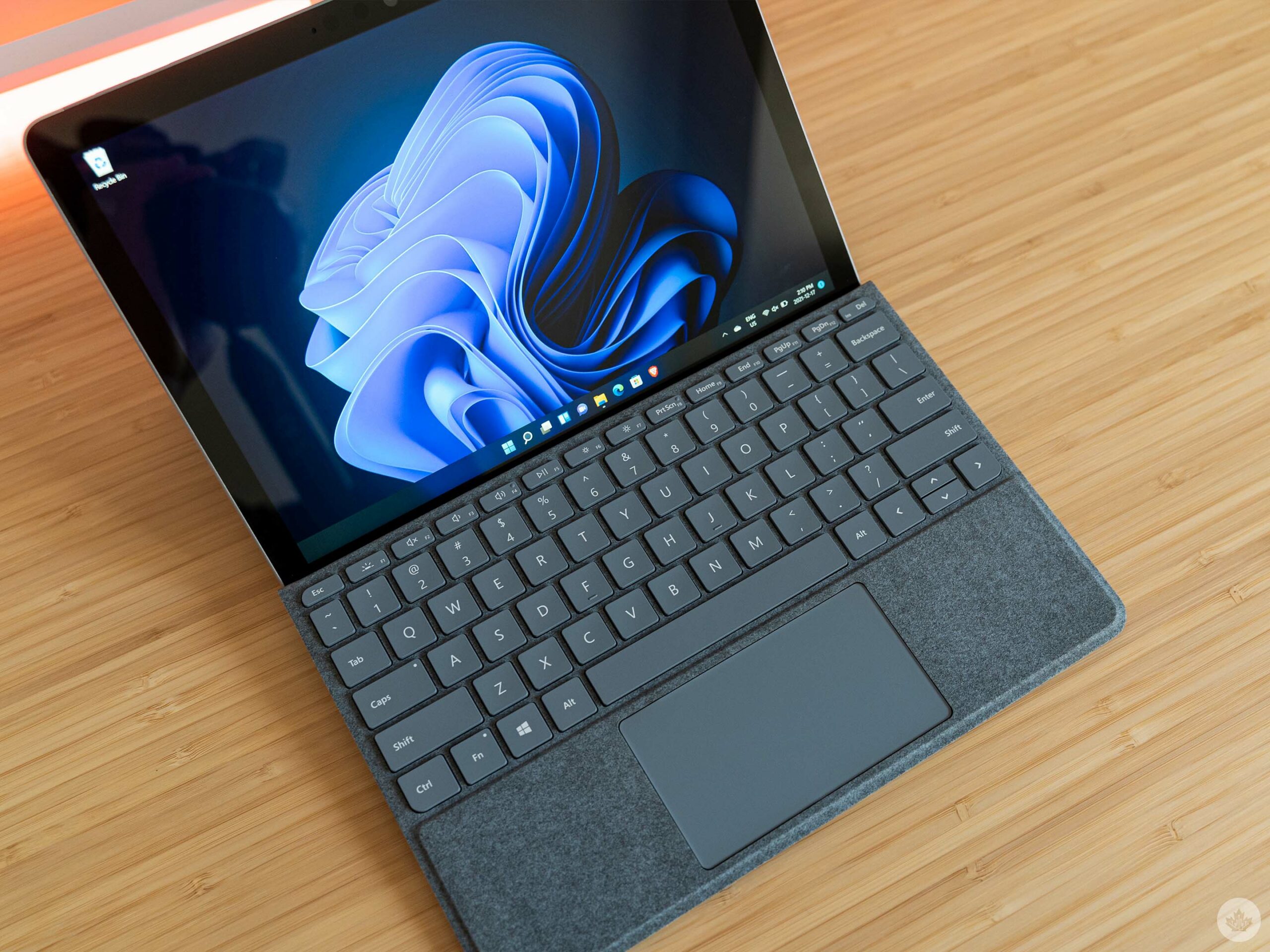 It shouldn’t come as much of a surprise, but the Surface Go 3 does not offer high-end performance. The unit I tested ran on a dual-core Intel Core i3-10100Y CPU, which is the highest level you can get in a Go 3. The other option is an Intel Pentium Gold 6500Y, which I imagine has equally terrible performance. That said, the Go 3 isn’t intended to be your powerhouse PC and so it’s not entirely fair to judge it that way. I’ve included score comparisons from our typical benchmark suite throughout this section, but frankly, the Go 3’s scores are embarrassing next to high-end laptops boasting much, much more powerful processors.

Before I get too much deeper into the performance comparison, I want to point out a few interesting things about the Surface Go 3 that differed from some of the other Surface devices I tested this year. With the Surface Laptop Studio, Laptop 4 and Pro 8, I found significant performance boosts by switching from the ‘Recommended’ performance mode to ‘Best Performance,’ at a cost to battery life. I also saw performance boosts when running tests while plugged in. The same didn’t hold true with the Surface Go 3 — it had almost identical performance on Recommended when running on battery and when plugged in, and actually had worse scores when running on Best Performance. The only tests that benefited from the Best Performance mode involved the GPU, but the difference was so marginal it wasn’t worth including. Unfortunately, it looks like there’s no way to eke out some extra performance by tweaking these settings on the Go 3.

As for battery life, running the suite of benchmarks drained the battery from 100 to 50 percent, but I attribute that more to the low-power i3 taking much, much longer to get through some tests (almost 30 minutes for the Blender test) compared to other laptops I've tested. Outside of the high-intensity testing, Surface Go 3 battery life was fairly good, but certainly not great.

While I included all our typical PC benchmarks, I also added in several Geekbench scores from recent, comparable iPads. If you’re going to pay attention to any of the benchmarks, I’d focus on the Geekbench chart since comparisons between the Go 3 and something like Apple’s new iPad mini and ‘regular’ iPad are more akin to the Go 3’s use case (more on this below). That said, both the iPad mini (2021) and the 9th Gen iPad trounced the Go 3 in benchmarks, and the Go 3 only narrowly beat out the 7th Gen iPad we tested as well.

To be fair, it’s a bit of an apples-to-oranges comparison (pardon the pun). The Surface Go 3 runs an Intel x86 processor, which differs significantly from Apple’s A- and M-series ARM-based CPUs. For the last while, Intel’s CPUs have struggled in the low-power use cases like what the Go 3 is for. And considering the Go 3’s i3 is a 10th Gen Intel chip, it’s even worse in this regard. In my experience, Intel’s CPUs work best when given ample power and adequate cooling, neither of which is readily available in the Go 3.

When I reviewed the Go 2, I questioned the decision to use an Intel chip over a more efficient ARM processor. That question remains with the Surface Go 3. Unfortunately, I think the Surface Go line won’t be compelling until Microsoft equips it with a better chip. A Surface Go boasting similar performance to Apple’s new iPad mini and with a full desktop OS would probably wind up on my must-buy list.

A tablet without a tablet OS 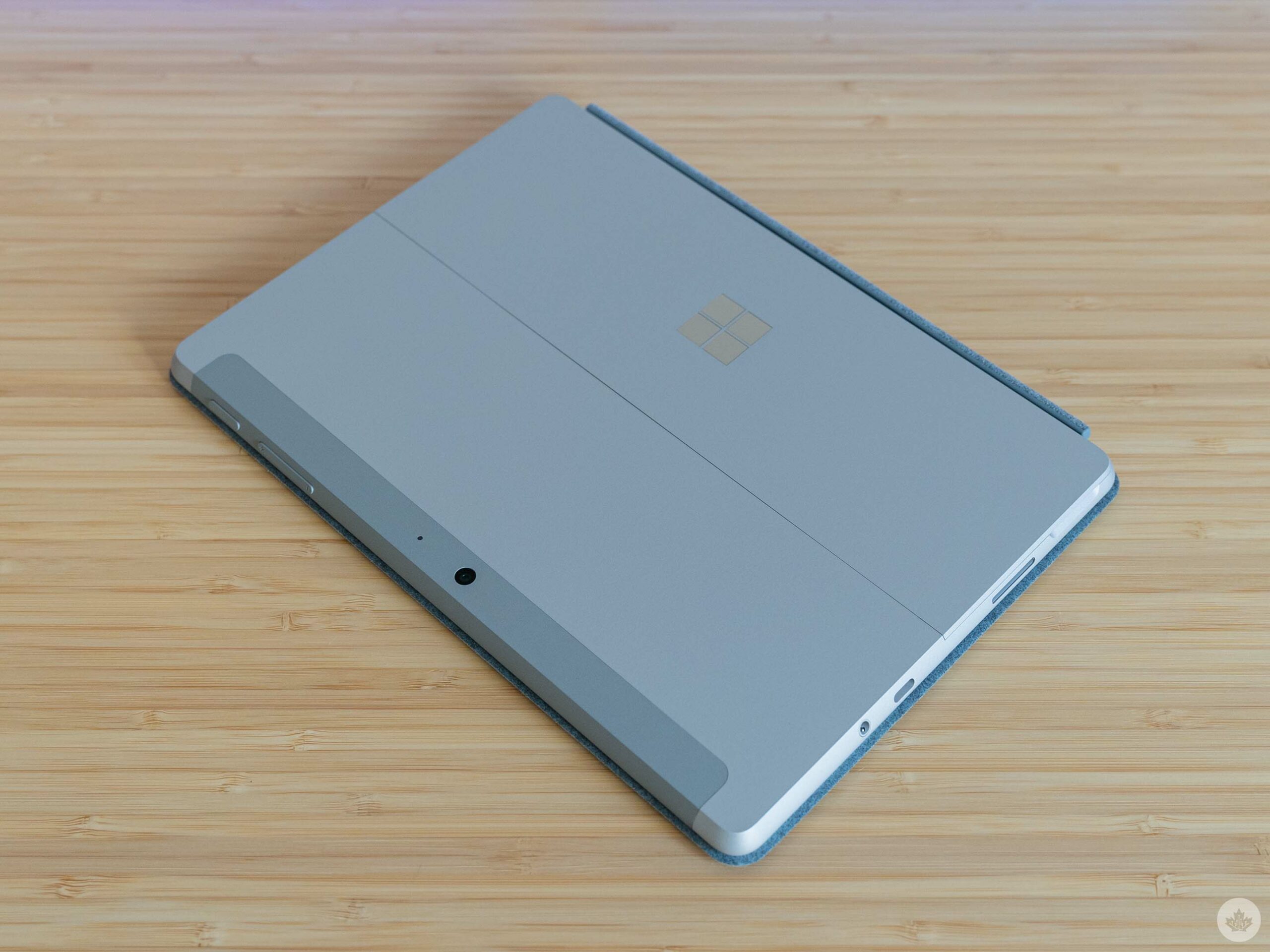 Speaking of, the Surface Go 3 has two main uses. The first is a tablet for media consumption and the second is a light-use portable PC for word processing, emails and browsing the web. Unfortunately, I don’t think it fulfills either use particularly well.

As a tablet, the Go 3 is a great size. It’s small, light and generally, it feels responsive to touch input. The real problem is Windows, which, despite the improvements of Windows 11, still isn’t a great tablet OS. Although you can get by with touch, everything still feels designed for mouse and keyboard. And if you’re hoping to take advantage of Windows 11’s new Android app support, keep in mind that you won’t be able to for a while. First, Android app support is still in beta, which means if you’re not willing to run a Windows Insider build, you won’t have access to them. Even worse, Android apps are currently limited to the U.S., so we Canadians can’t enjoy them anyway. 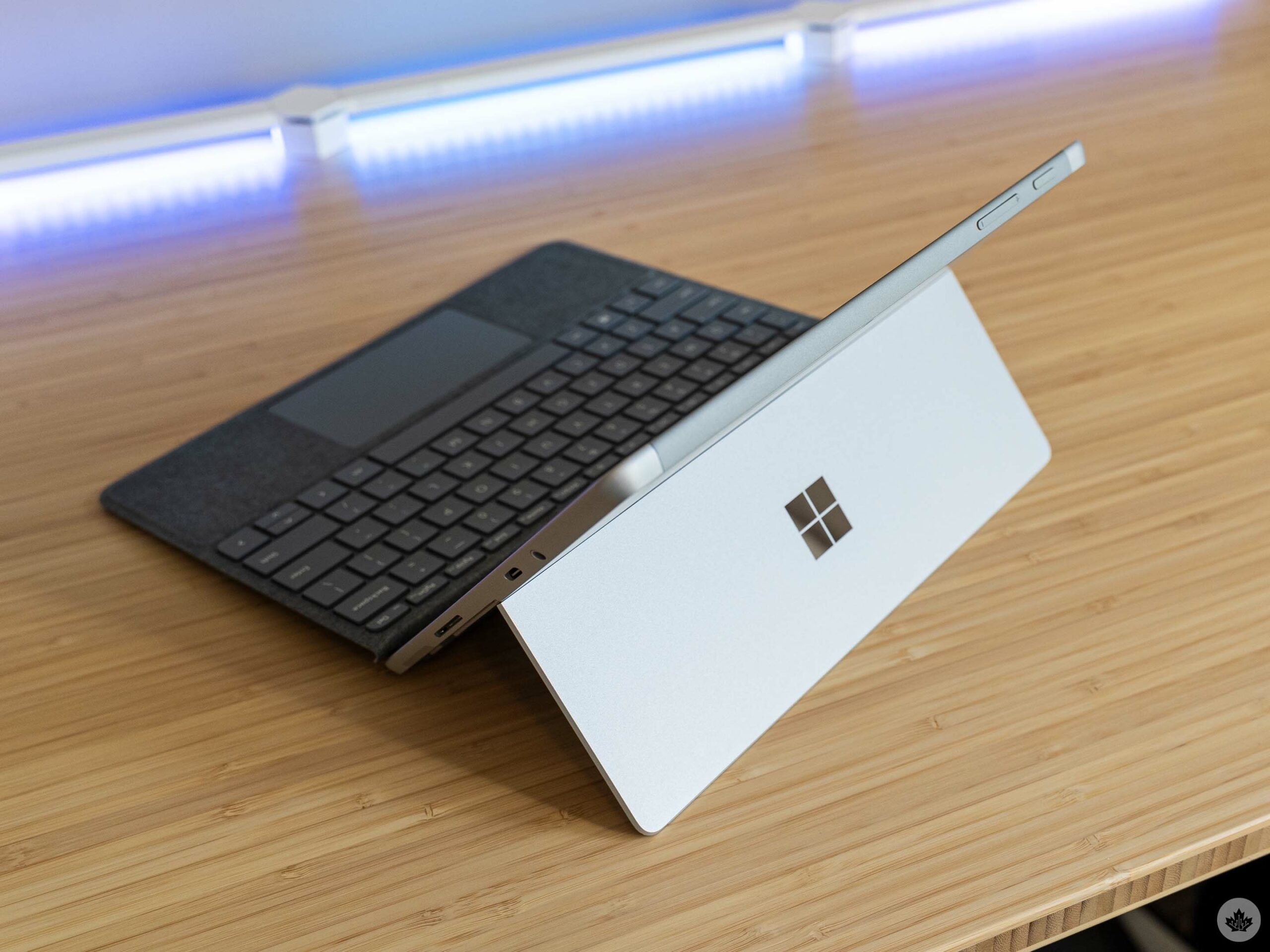 I think the Go 3 handles the second light-use PC use case better, although it’s far from perfect. Unlike other tablets that run Android or iPadOS, the Go 3 runs Windows 11. That means you can get a full-fat desktop-class browser, which is honestly great. Even though iPads can run laps around the Go 3 in performance, that one benefit means the web browsing experience on Microsoft’s mini 2-in-1 is miles ahead of the extremely limited browsing experience available on Apple’s tablets.

Of course, to get full access to the wide gamut of desktop browsers available on Windows, you’ll need to take the Surface Go 3 out of ‘S’ mode, a sort of ‘safety’ feature that restricts app installs to only what’s available on the Microsoft Store. It’s not a big deal – you can do it for free from the Microsoft Store. I think S mode has a place (it’s a great option for the less tech-savvy out there) but I wish Microsoft was more upfront about letting me choose whether to use it. For example, give me the option to enable or disable it at first set up rather than waiting until I try to download something outside the Microsoft Store and hitting me with a warning message. 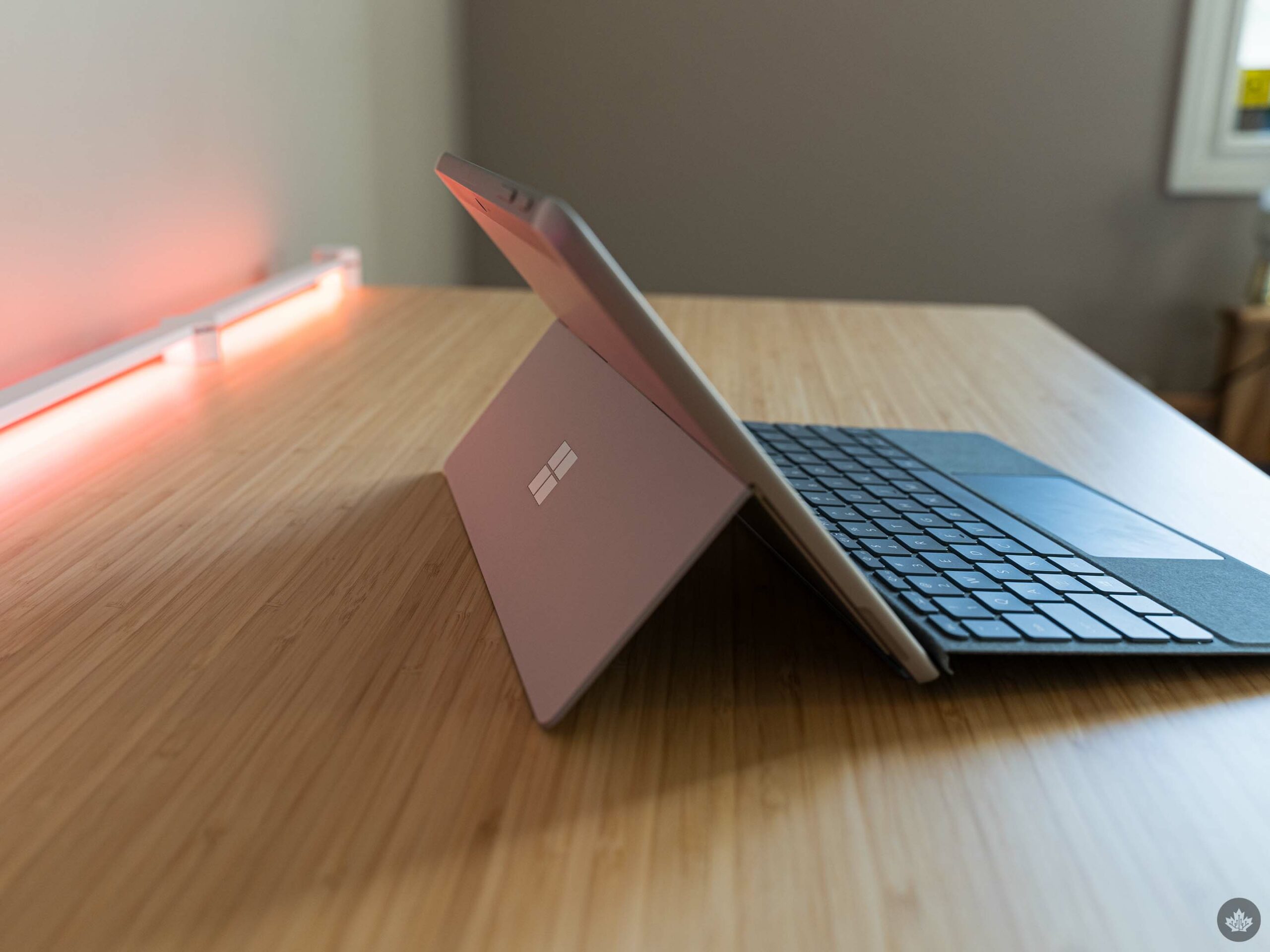 Outside of these niche uses, I don’t think the Go 3 can fill any other roles. For example, I was able to use it for about 90 percent of my job, since I basically just need an internet connection and a web browser for it. The other 10 percent, however, involves editing photos. The Go 3 has a leg up on Chromebooks since I can install Photoshop, but the performance is so poor that I don’t want to. Ultimately, I found I’d work on my Surface Go 3 until I couldn’t anymore, then switch to a more capable device to keep going.

Too expensive for what it is 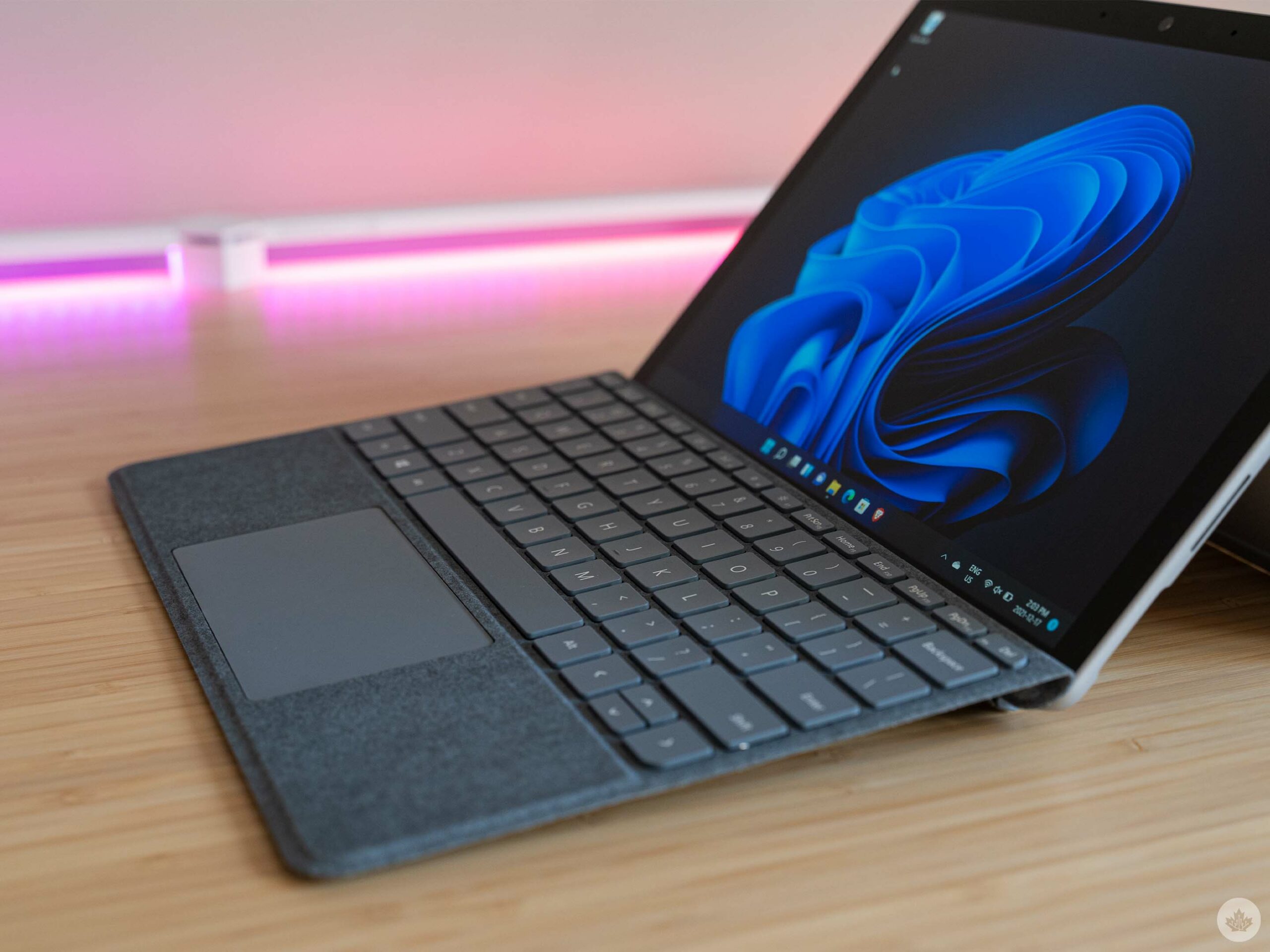 Obviously, everyone’s needs are different and many people likely wouldn’t need anything more powerful than a Surface Go 3. That said, considering the price, you could probably get something with much more power and save yourself the hassle of running into the Go 3's upper limits.

The base Surface Go 3 costs $519 and offers fairly low-tier hardware. The next step up (which simply doubles your RAM to 8GB and storage to 128GB, but runs on the same Pentium 6500Y CPU) costs $699. To get to the version I tested, you’ll need to fork out $819 and, as demonstrated above, the performance is not great with the i3. I’m not sure how much worse the Pentium is in comparison, but I’m also not sure it's worth the increased price either. 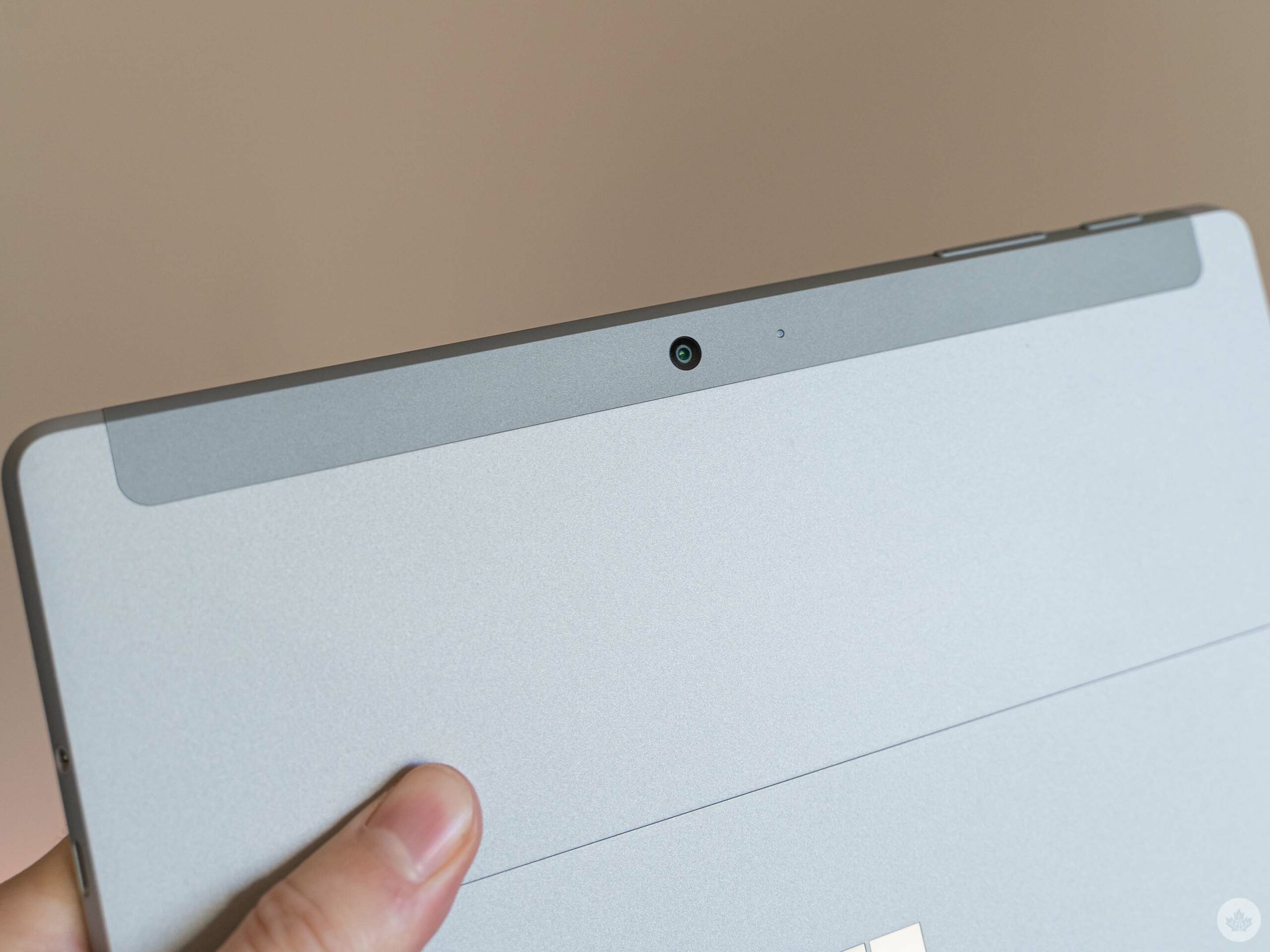 Besides, at the $800 price point, it’s not hard to find a more traditional clamshell laptop from the likes of HP, Lenovo, Acer and others with more powerful Intel or AMD internals. And for those who really want a 2-in-1 form factor, you can find some in the $800 price range too (although I haven’t found one as small as the Go 3).

When purchasing a PC, I often lean into the bang-for-buck mentality and try to get the best performance for my money. Unfortunately, the Surface Go 3 doesn’t fit that bill, making it hard to justify over another equally-priced option with more performance. 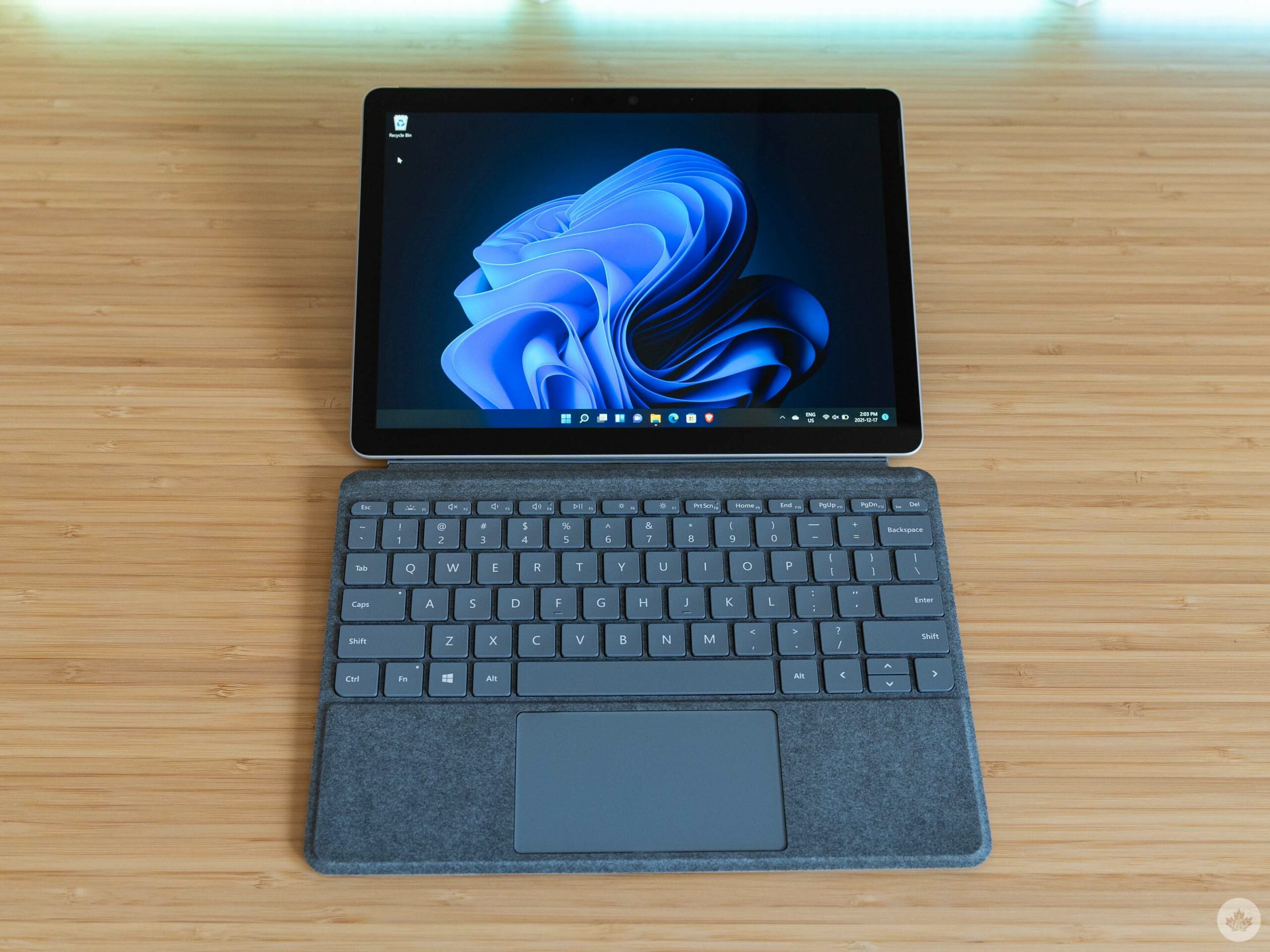 And with all that pricing stuff in mind, it’s important to remember that you’ll need to fork out extra dough for a keyboard and mouse. The Surface Go Type Cover is not included with the Go 3 and starts at $129. Since a keyboard and mouse are practically necessary to use the Go 3, make sure to include them in the price.

Thankfully, the Type Cover is pretty good. Like last year, my biggest complaint about the Type Cover is it feels cramped. That’s an unfortunate side effect of the Surface Go 3 being small, however. It’s still worth keeping in mind – if you have big hands, you won’t find the Type Cover comfortable to use.

An easy remedy to this is to skip the Type Cover all together and invest that money into a wireless keyboard and mouse. For my part, I’d probably pick up a nice 65 percent mechanical keyboard for the ultimate typing experience, but there are plenty of alternatives out there. 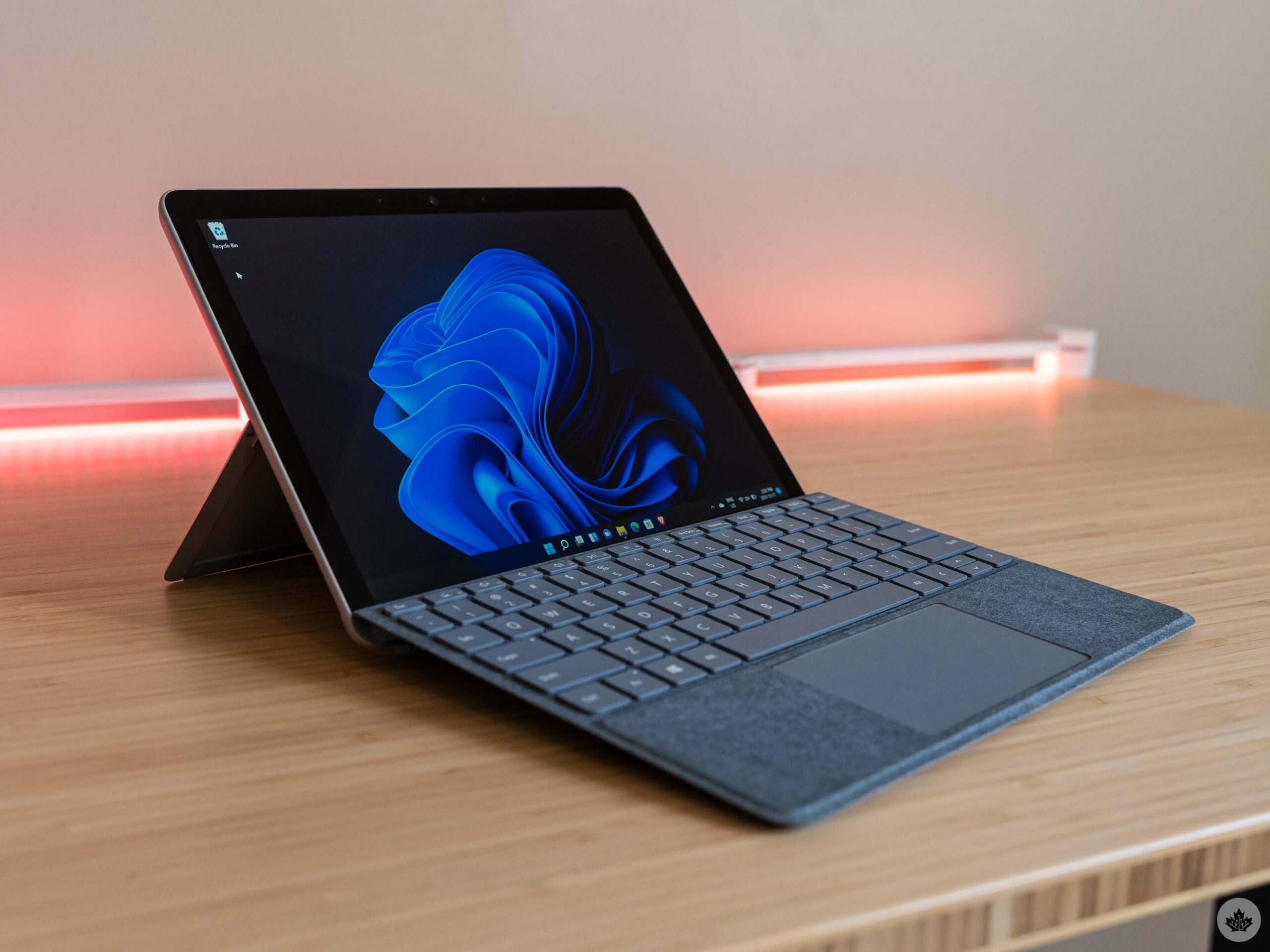 Regardless, you’ll need to pay extra for a keyboard, which may or may not be a frustration depending on how necessary you think keyboards are.

The Surface Go 3 does everything else fairly well. The 10.5-inch screen looks sharp and has accurate colours, the battery is decent, and it's incredibly portable.

Could be good for some niche users

Whether or not the Surface Go 3 is good really comes down to your needs. People with a lot of light usage, like browsing the web, watching media and doing some word processing will likely get a lot out of the Surface Go 3.

However, for anything more demanding, the Surface Go 3 just doesn’t make sense.

I think the big thing holding back the Go 3 are the CPU and software. If a future Surface Go device ran on something as powerful and efficient as Apple’s A- or M-series chips, it’d be a much more compelling option. And if Windows 11 eventually becomes a top-notch tablet OS, that would help a bunch too.

The Surface Go 3 starts at $519.99 in Canada and is available on the Microsoft Store.

"The Surface Go 3 is an okay laptop that can sometimes be a mediocre tablet."