Ni no Kuni: Cross Worlds is a solid, if peculiar, mobile MMO

It sure is pretty, though

In general, I don’t like mobile gaming, and MMOs — outside of Final Fantasy XIV — are absolutely not my cup of tea.

Having said all of that, Ni no Kuni: Cross Worlds — a new mobile MMO from Netmarble — is pretty solid. Co-developed by Ni no Kuni maker Level-5, the game puts you in the shoes of a beta tester who’s thrown into a virtual world. I’ve only played a few hours of the original Ni no Kuni way back in 2013, so I can’t speak to what connections — if any — Cross Worlds has to that or its sequel. (I also think Cross World‘s premise is a little odd considering you’d assume this was just a regular colourful fantasy world, but I digress.)

Looking past all of the frivolous story beats, the game has a lot of charm. Immediately, I was impressed by the lush, console-quality visuals. The painterly aesthetic absolutely pops, especially on my iPhone 13 Pro, and the animations are lively and fluid. On top of that, Joe Hisaishi, the composer of the previous Ni no Kuni games and numerous Studio Ghibli films, has scored Cross Worlds. I’ve been going on a Ghibli rewatch ahead of Hisaishi’s Toronto concert, and his splendid music adds even more to Cross Worlds‘ lovely presentation.

But Cross Worlds also has one of the oddest design choices I’ve seen in a while: it can be played almost entirely by itself. To be sure, it’s not uncommon for MMOs and mobile games to have some sort of automation, but I’m not exaggerating when I say that Cross Worlds automatically does nearly everything for you. After creating my character, the magical spear-wielding Witch, and personalizing her using the game’s serviceable customization options, I was thrown into a quick tutorial. This opening stretch was the most hands-on I got. (For what it’s worth, the other four classes seem decent so far: the Rogue (an archer who can cast buffs), Destroyer (a hammer-equipped tank), Engineer (boasts guns, machines and healing spells) and Swordsman (exactly what he sounds like). 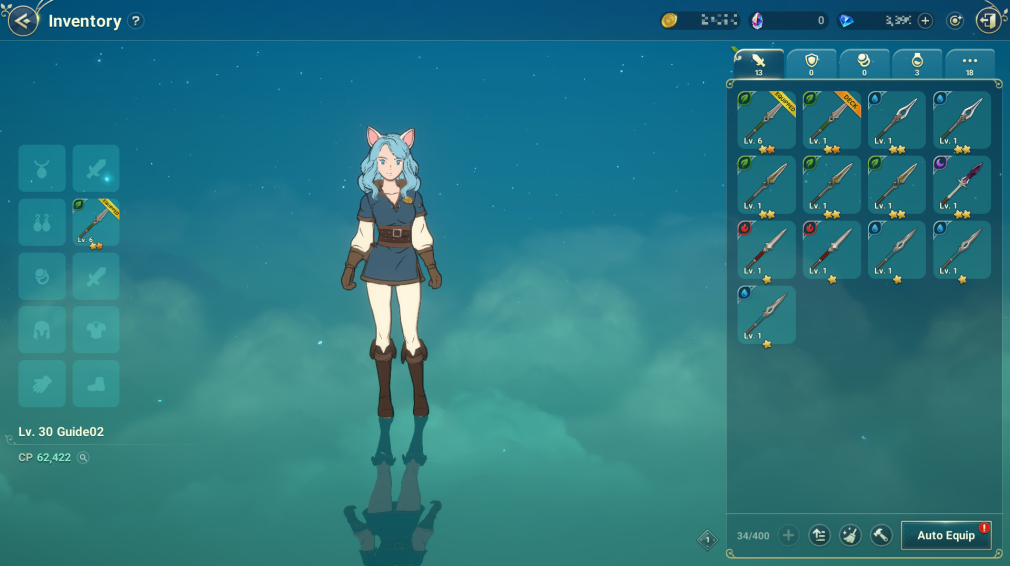 Upon completing this intro, I was thrown into the game’s overworld, which was initially nice to soak in thanks to the wonderful visuals and music. But that was short-lived, as the game almost immediately started taking my character, on auto-pilot, to the next story mission, featuring a strange British accented pig-like floating creature named Cluu. As I let this go on, I was taken into a battle where my character… did basically everything for me, outside of dodging enemy attacks. Throughout all of this, the only interaction I had was tapping the screen to skip dialogue options and accept my reward for completing the quest.

Of course, you can turn all of this off, so there’s some level of input on your part. And I can even see how automation might be useful for some looking to avoid the notorious “MMO grind,” especially since the game bafflingly doesn’t have controller support at the time of writing. That said, it was weird for it to be on by default. Moreover, it honestly made me a little less enthusiastic about playing. After all, if the game can do virtually everything for me, then what’s the point?

Following this mission, I decided to play manually, which fared okay. In combat, your character has a standard combo attack and six special skills that operate on a cooldown. For my Witch, these included a mix of fire-based ranged spells and close-quarters spear jabs, which look delightfully flashy. You can also roll out of the way of attacks, but I didn’t find myself needing to do that. (Naturally, the game can’t be very difficult — at least this early on — and require you to dodge if the automated combat can’t actually do that itself). In the end, it’s all pretty standard stuff for an RPG on mobile, but it works reasonably well. 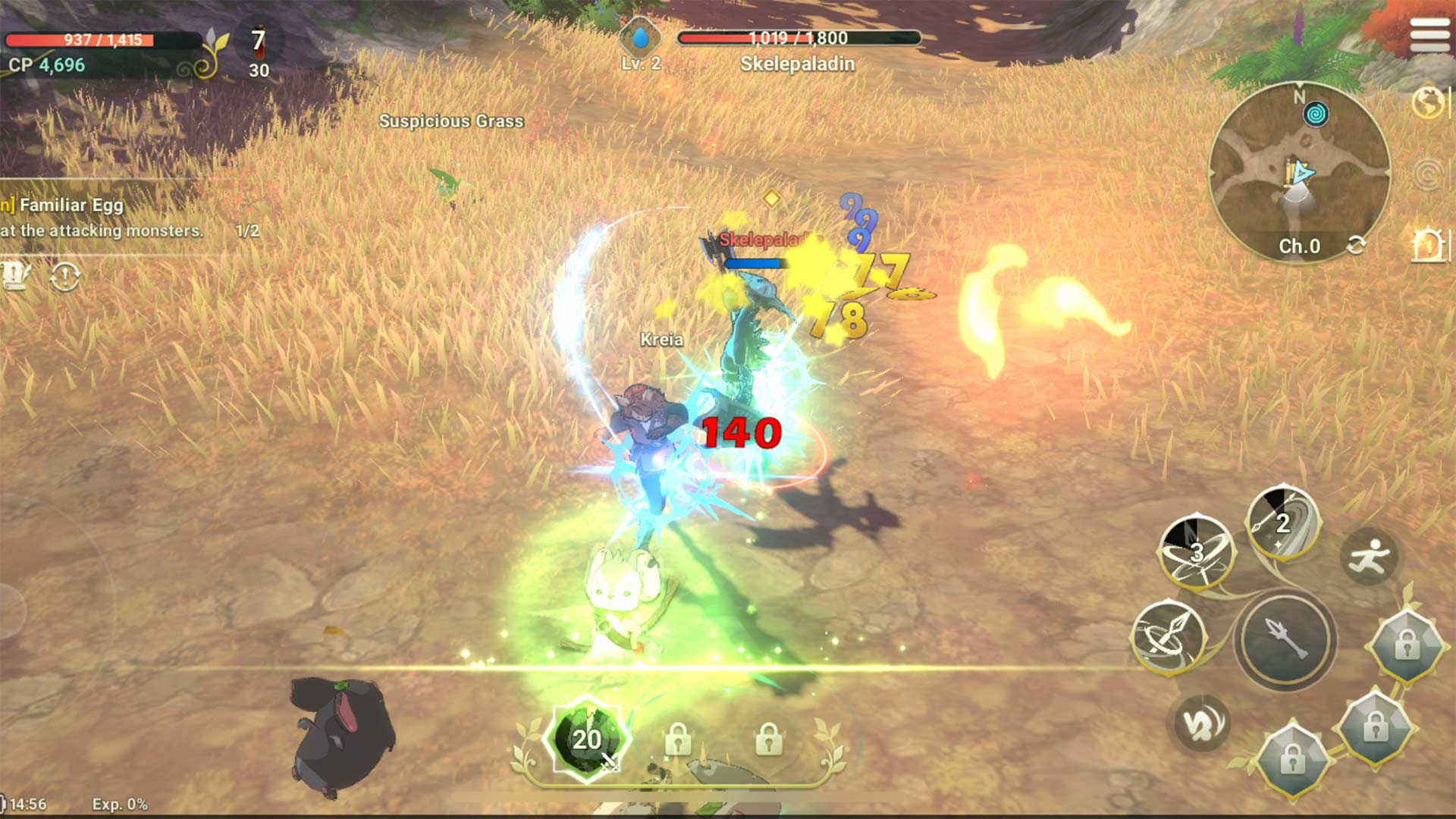 But where I’m relatively lukewarm on the combat, I’m quite impressed with Cross World‘s breadth of content. There’s a slew of quests in here, each offering its own rewards through which you can purchase and upgrade gear. There are also recruitable ‘Familiar’ creatures that can help you in battle, adding a Pokémon-esque monster-catching element. And best of all, the game has a robust social offering. On top of the expected co-op and PvP (player vs. player) options, there’s a neat “kingdom” mechanic, through which you can team up with others to rebuild destroyed territory. In a way, it sort of reminds me of the novel asynchronous multiplayer elements of Death Stranding, wherein you pooled resources together with other players to construct a new world, except in Cross World you actually see other people. As you build the kingdom, you all get access to shops, special battles and other rewards, making it well worth your while. I’m generally someone who likes to run through MMOs as solo as possible, but I certainly appreciate that this content is here.

In the end, I haven’t spent a significant amount of time with Ni no Kuni: Cross Worlds, but it so far hasn’t quite dug its hooks into me. But I admit that this is more down to my personal tastes of not normally being into this sort of game, rather than anything overtly wrong with it. I also can’t speak to how intrusive the in-app purchases might be, although the knowledge that Netmarble has gross blockchain and NFTs planned for the game is genuinely offputting.

For now, though, Ni no Kuni: Cross Worlds is worth trying out, especially if you’re a mobile gamer. After all, being free-to-play removes the subscription barrier that many MMOs have. If nothing else, it sure looks and sound pretty.

Ni no Kuni: Cross Worlds can be downloaded on Android, iOS and PC.