Mickey Mouse in the Multiverse of Madness

Now, Vancouver-based Kabam is giving similar treatment to other Disney-owned characters in Disney Mirrorverse. And while it’s certainly not as in-depth or engaging as Ultimate Alliance, given that it’s a free-to-play mobile game, it’s certainly fun enough.

The premise is simple: when a supernatural force known as the Fractured threatens the multiverse, Mickey Mouse must use his magical powers to assemble heroes and villains alike (known here as “Guardians”) from the worlds of Disney and Pixar.

We’ve seen such a story concept many times before, and Mirrorverse unfortunately doesn’t really make the most of it. Occasionally, you’ll get a few basic text-based cutscenes in which characters interact, like Tangled’s Rapunzel getting annoyed with Pirates of the Caribbean‘s Jack’s obsession with treasure. It’s by no means exceptional writing, but it adds at least a little character to the proceedings. Overall, though, you don’t get much of this, and the lack of any voice acting for these characters only further makes them feel a bit lifeless in terms of characterization.

Thankfully, Kabam has quite clearly flexed its creative chops when it came to designing the war-ready aesthetic of each character. Using the multiverse conceit, the developer has dreamed up some truly unique and charming takes on iconic characters. For example, Monster’s, Inc.’s Sulley sports battle armour and a giant shield made out of a scare door. Snow White has a plant-covered “Thornhammer” that looks somewhat like Thor’s Stormbreaker from the Avengers movies. And Toy Story Woody looks downright dapper in a full sheriff’s getup that’s not unlike what Will Smith wore in Wild Wild West.

I wasn’t expecting Woody to ever look *cool,* but here we are.

Discovering the little quirks that Kabam has given each character is a real highlight of Mirrorverse, and it further encourages you to unlock them all. The diversity of properties represented is also quite solid. You’ve got heavy hitters like Toy Story (Buzz, Woody and Zurg), Frozen (Anna and Elsa), The Little Mermaid (Ariel and Ursula) and Aladdin (Aladdin, Genie and Jafar), and more offbeat picks like Wall-E’s Eve, Onward’s Ian Lightfoot and Inside Out’s Anger.

The surprising badassery of each character extends to combat, which consists of real-time movement mixed in with tapping onscreen attack buttons. Each is broken down into one of three categories — Melee, Ranged and Tank. As a Ranged character, it was fun to see Merida — clad in Scottish warrior clothing — alternate between shooting flurries of arrows from afar and throwing magic axes. Likewise, Sulley running up to an enemy and using his shield-door to literally scream at enemies is also always enjoyable.

All told, the novelty of seeing these characters in action and mixing and matching them to create your ultimate party of three is quite entertaining. Unfortunately, it only goes so far before repetition starts to settle in heavily. Specifically, it’s the structure of levels that are the biggest shortcoming. Essentially, you clear one wave of enemies, your heroes automatically run to a second area, and then there’s a tougher enemy in a third and final arena. Rinse, lather and repeat for virtually every battle. While your characters do level up, that just improves their stats; there are no further RPG mechanics like unlocking skill trees or equipping new gear. 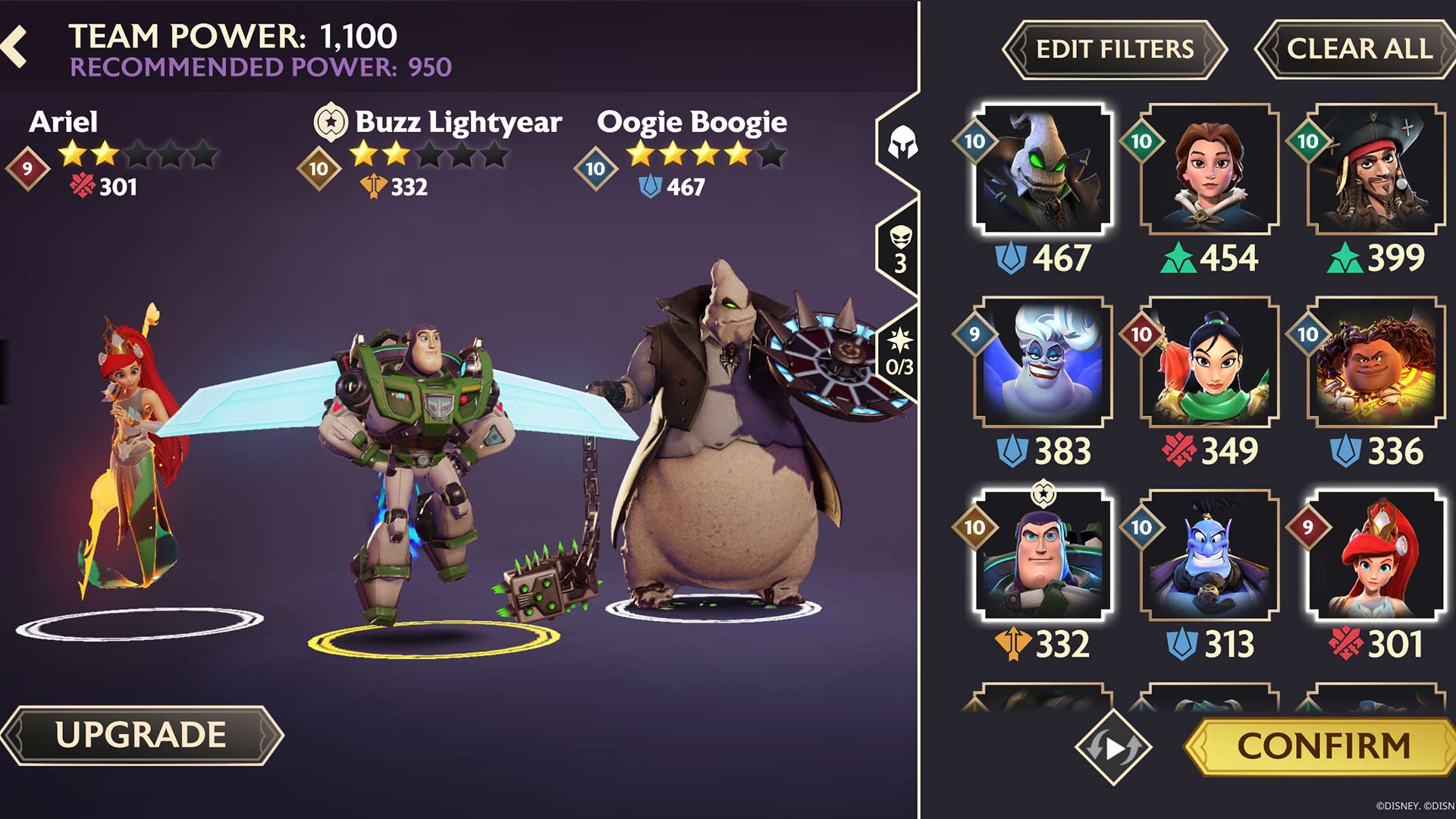 Even the game’s optional content, like Supply runs (used to farm XP motes to level up characters), Events (timed quests themed around certain characters, like Buzz and Tron vs. Zurg) or Dungeons (a series of floors to work through to earn artifacts) all amount to the same “two regular battles, one boss battle” getup. At the very least, it feels like the game needed some sort of hub area to walk around in and talk to your characters to shake things up just a little bit.

That said, if the game’s simple and repetitive combat can feel like a steady grind at times, that so far hasn’t been the case when it comes to unlocking characters. While you’re bombarded often with offers for discounted microtransactions or even main page idle screens with Guardians you haven’t unlocked, the game otherwise gives you new characters at a decent pace. Over the course of playing for maybe an hour, I had a roster of six characters, with many more still to unlock using ‘Crystals.’ These resources can be purchased using ‘Orbs,’ which you earn from completing missions but can also purchase using real money. It remains to be seen how balanced the distribution of rewards will be later in the game, but so far, I haven’t felt obligated to spend any cash. 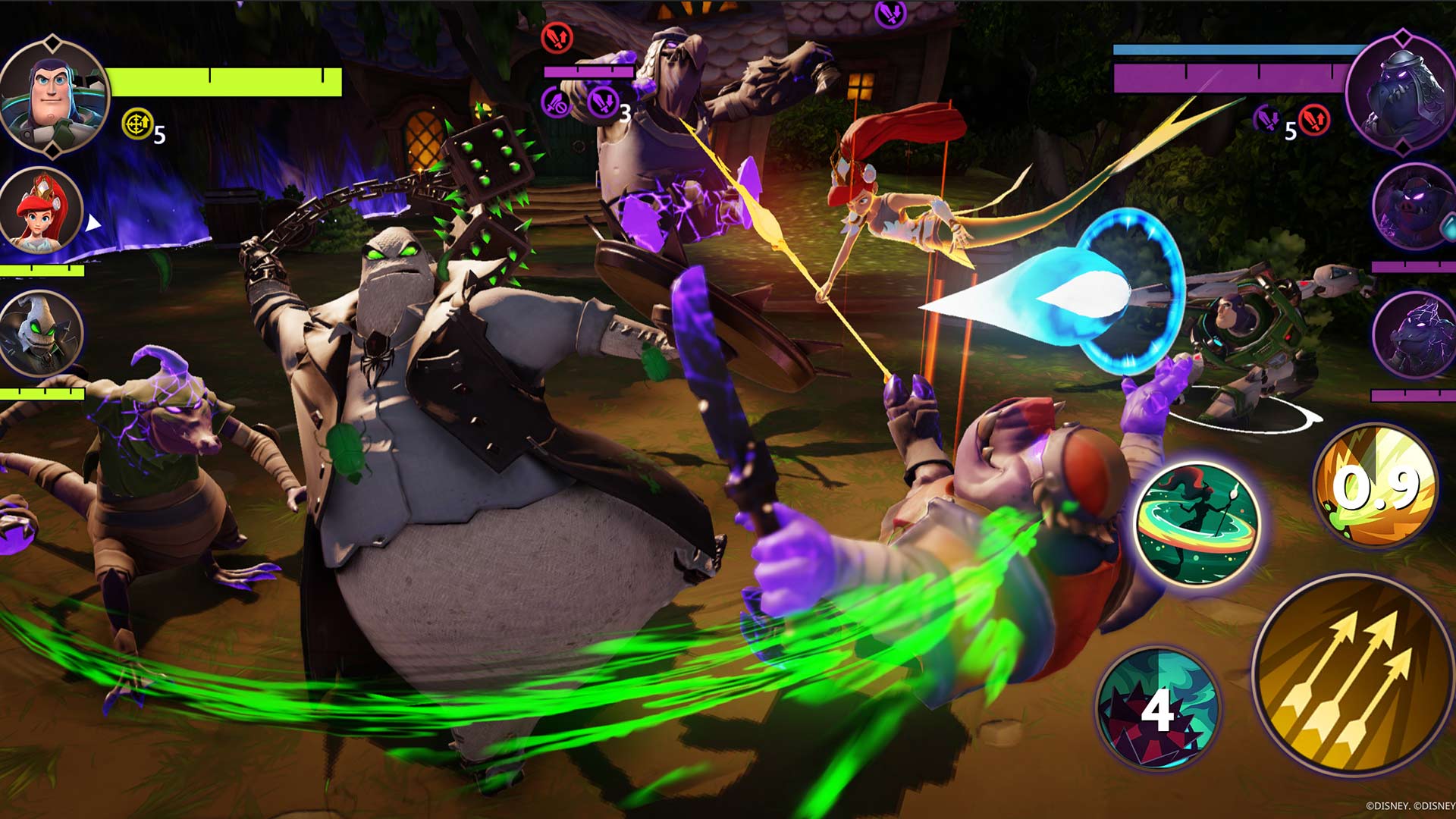 In the end, Disney Mirrorverse doesn’t quite feel like it capitalizes on the potential of a Disney multiverse story, and its fairly simplistic combat frustratingly doesn’t change over time. That said, those who primarily play on mobile will no doubt have fun with this easy-to-pick-up-and-play nature, and everyone can admire the imaginative twists on beloved Disney and Pixar characters.