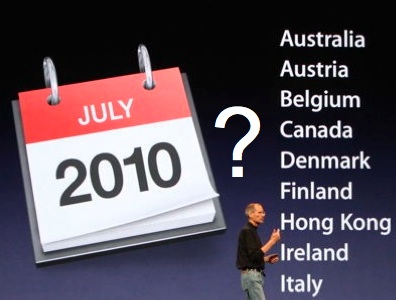 There’s rumours flying around the interweb today that state the anticipated iPhone 4 launch in Canada could be delayed beyond July. No official confirmation from Apple or the carriers. According to BGR who noticed the Apple site was changed from the “Coming in July” to only now show “Coming Soon”.

Personally I can’t remember what the site actually said but earlier this week (on Tuesday) we have a screenshot from the Apple site with only the “coming soon”. Apple did confirm during the iPhone 4 launch that Canada and 17 other countries will be getting the iPhone 4 in July… but is Canada that low in market that we are the only one’s singled out? We must sell more iPhones than New Zealand?

All carriers have stated the same comment that the iPhone 4 will be available “in the coming weeks“. The dates we’ve heard flying around – this was on Monday before Apple pre-sold 600,00 units – was that it was landing on Canadian soil between July 7th – 15th.

Recently all the carriers discounted their prices of the iPhone 3-year contracts. The good news is that it’s coming soon… the bad news is that we don’t have a clear date of when.

What do you think of this rumour?