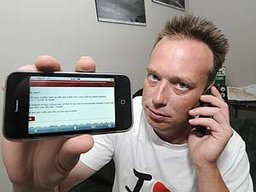 Remember a couple days ago that Calgary-resident named Jason Boutang who went on vacation in France, turned on his iPhone’s roaming and racked up a $8k bill by using a translator app and streaming live radio. Boutang said “Eight grand is pretty much extortion, it’s unjustifiable.”

I guess it actually does pay to become a “Member” of Virgin Mobile because Virgin has credited a whopping $6,000 off his bill to have it reduced to $2,000. Virgin’s Erica Faltous stated that “We reviewed the bill and since then, we’ve made the decision to re-rate his bill as though he had the roaming bundle. These are things that are evaluated on a case-by-case basis; hopefully it will never happen again.”

The kicker is not just the price reduction but that Boutang actually is now leaving Virgin Mobile to go with Rogers on Prepaid. So Virgin misses out on $6k in revenue and a subscriber.