Consumer Reports testing reveals iPhone 6 Bendgate ‘may be overblown,’ but Galaxy Note 3 is most durable

“Bendgate” ripped through the internet this week. Pictures and videos conveyed a tendency for the iPhone 6 Plus to bend slightly when a moderate amount of pressure was applied to a weak point on the chassis.

Apple’s official response was that the “iPhone 6 and iPhone 6 Plus meet or exceed all of our high quality standards to endure everyday, real life use. With normal use a bend in iPhone is extremely rare and through our first six days of sale, a total of nine customers have contacted Apple with a bent iPhone 6 Plus.”

Consumer Reports, one of the few outlets that uses quantitative measurements in its procedures, has completed its own durability and “bendability” testing of several flagship smartphones — the iPhone 6 Plus, iPhone 6, iPhone 5, HTC One M8, Samsung Galaxy Note 3, and the LG G3. Each of these were put through a “three-point flexural test” that tested chassis strength with various levels of pressure.

In the video below, “Consumer Reports’ tests pushed the iPhone 6 and 6 Plus much further than [Apple’s test of 55 pounds of force]. We started light, applying 10 pounds of force for 30 seconds, then releasing the force. Then we upped the force in 10-pound increments, noted when the phones first started to deform (that’s what our engineers call it) and stopped the test for each phone when we saw the screen come loose from the case.” 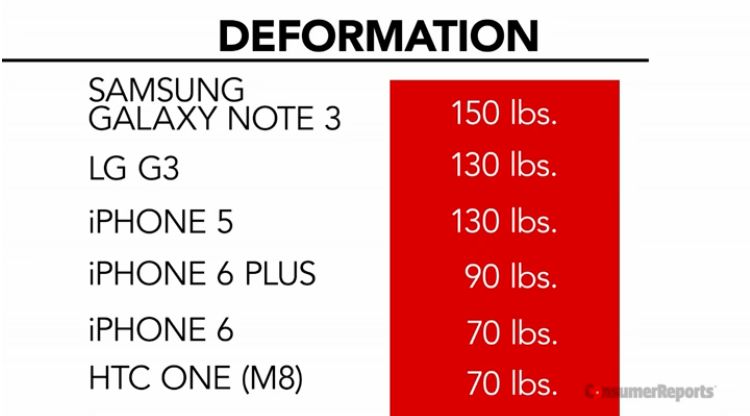 Consumer Reports final word is Bendgate is that the issue may be overblown.