If 2014 wasn’t the year of the wearable, it definitely laid the ground work for 2015. Though the wearable industry has yet to hit its stride, we’ve already seen smartwatches from Sony, LG, Samsung, Motorola, and Asus, as well as fitness trackers from Misfit and Fitbit and smartglasses from Google, Moverio, and Epson. And those are just the big ones. Companies are really just getting started on their wearable strategies, and there are many, many more devices on Kickstarter, all of them hoping to hit on something truly great in these early stages.

The Mira is one example. It’s trying to address an issue that the wearable industry seems to have identified within itself. Multiple studies have shown that men are more likely to adopt wearable technology than women, so Mira is trying to target women with a new device that was supposedly “inspired by women, for women.”

The Mira is mainly a fitness band. It tracks steps, calories burned, meals, and the intensity of one’s workouts. The Kickstarter page describes a device that aims to reward you for every healthy choice “no matter how small” and the app offers motivation (“Boosts”) via a dedicated button.

Mira says its device was “conceived, prototyped, and iterated” with a panel of women from across the United States. This panel of women said that they wanted a tracker that was easy to use, fit into their lives, as well as something personal, motivating, and flexible.

“They needed a tracker that could quickly adapt to their lifestyle and, in a moment’s notice, have a recommendation for a healthy activity they could do in a few minutes of free time.”

Sounds great. Women are busy. Not all women have the time or the motivation to do the amount of exercise that they want. That said, I don’t know how many women will appreciate how Mira approaches that issue. 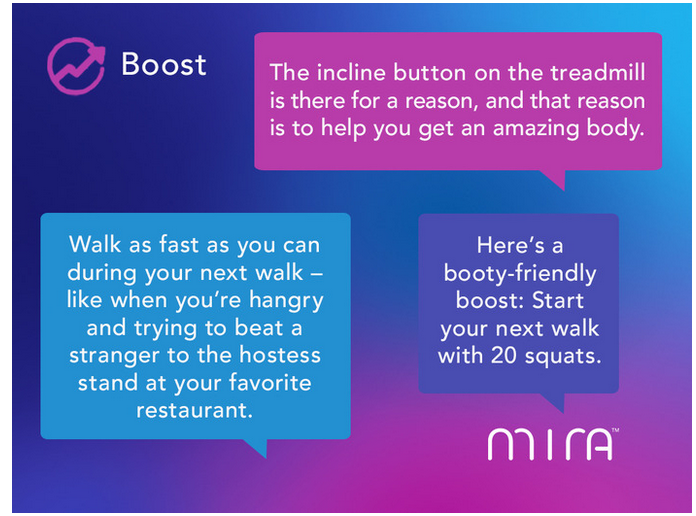 I admit I don’t speak for all women, but personally don’t want to be told, “Walk as fast as you can during your next walk — like when you’re hangry and trying to beat a stranger to the hostess stand at your favourite restaurant.” The suggestion is great, but the way it is framed is certainly not universally appealing. It’s patronizing. Similarly, telling me that the reason the incline button on my treadmill exists is to help me get an amazing body isn’t really constructive. 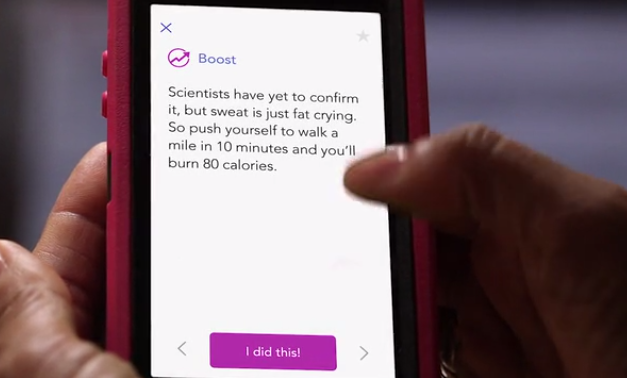 Creating a device for one gender or the other is never going to be easy. It’s a very delicate process. It’s fine to recognize that there are general differences between men and women and their desires. The key word here is “general.” It’s not just that women are busy. It’s that people are busy. So yes, highlight differences between genders, but don’t make consumers feel like those differences define them as a person or define their gender. It’s the same problem beauty companies face when they try to target “normal-sized women.” What is normal? And who are they to decide what does or doesn’t fall into that category?

Mira shows that the wearable industry is still confused as to what women want or how to approach women in general. The irony is that women have already told wearable companies what they want. This study from NPD (and this one from Accenture, and this one from Nielsen) show that women are more into fitness tracking devices than men are. So how is it that a company like Mira can build exactly what women want, but pitch it in a way that is so condescending? With this insight about fitness trackers readily available, it’s mind-boggling that Mira is choosing to market its device with comments that use “hangry” as a motivational simile.

If you’re employing sweeping generalizations to target a specific group of people, you’re automatically alienating those that fall outside of those generalizations. When your product is as versatile as a fitness monitor and a companion app (that could theoretically be updated to give all kinds of feedback for varying levels of fitness), that’s extremely shortsighted.

The Mira’s hardware is actually very visually appealing and the idea is good: a stylish fitness band that encourages effective exercise in small, manageable bursts. It even ties in one of the most exciting aspect of wearables today, which is that the actual tech component is completely separate from the band itself. This allows you to swap it in and out based on what you’re wearing or where you’re going. This is a product that could be marketed to any group of people, male or female, if Mira wanted to do that.

At time of writing, 36 people had already helped Mira raise almost half of its targeted $10,000. Of those 36 backers, 30 have pledged enough money for a perk that yields a Mira bracelet. First shipments are scheduled for January, 2015. Retail price at launch will be $169.