CES this year was full of promise. Promise of better sleep, healthier days and more meaningful connections with others.

But one thing that caught our eye was the sheer number of connected pet products. From wearables to trackers to auto-feeders, this year’s show was full of great stuff for our furry friends. 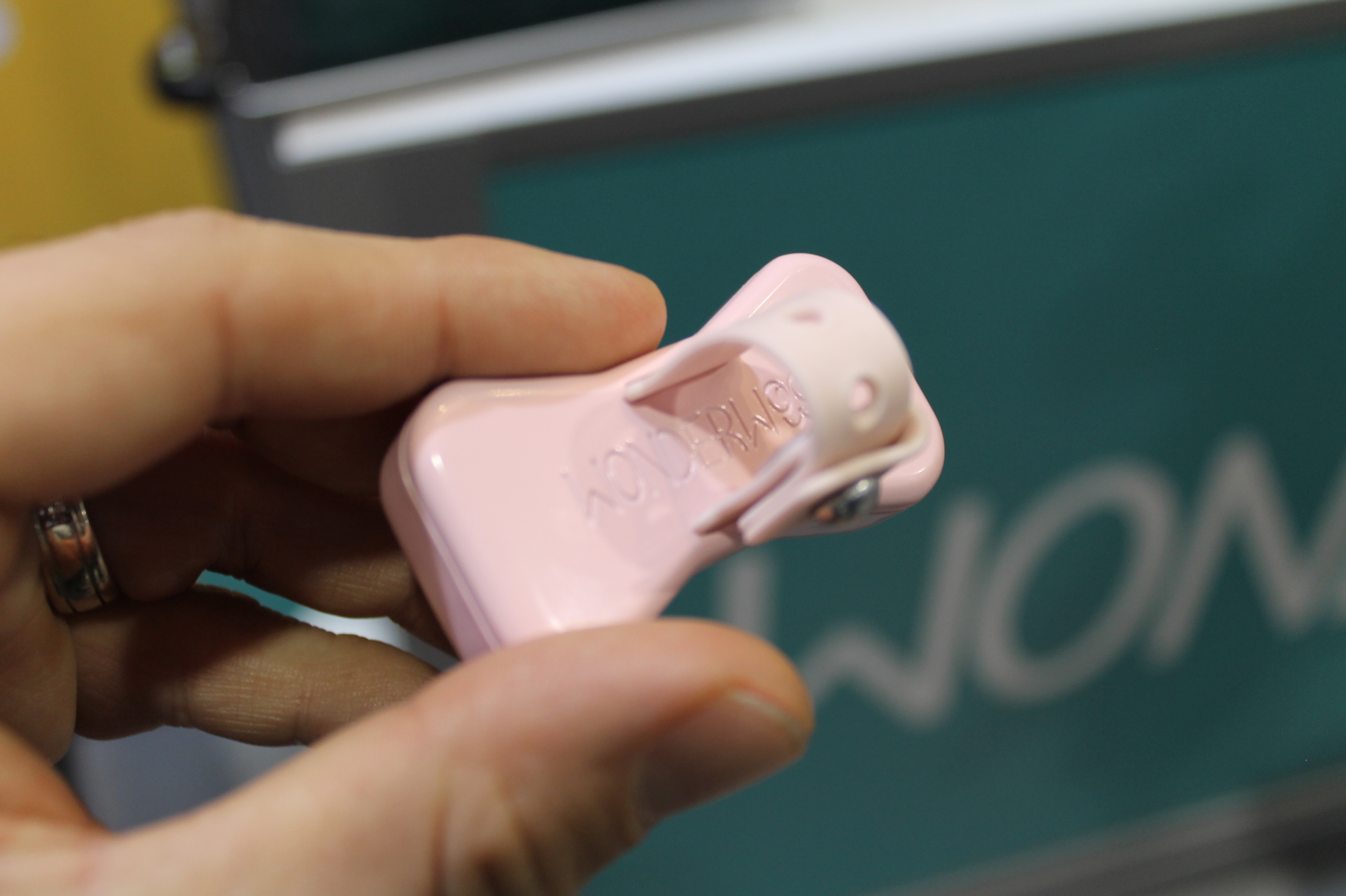 For the dog owner that cares as much about the health of their puppy as they do his fashion, here’s WonderWoof. WonderWoof is a wearable tracker for your dog shaped like a bowtie which, according to Founder & CEO Betsy Fore, is a big trend for dogs. The device comes in a variety of fun, playful colours including a Tiffany’s blue and classic tuxedo black.

WonderWoof’s tracker uses an accelerometer and gyroscope to measure your dog’s movement through out the day. It also has Bluetooth which is used both to send this data to a companion iOS app as well as a way to track your dog within Bluetooth range, usually 30-100 feet depending on interference. The battery life of the tracker is expected to last 7 days and can be charged within a couple of hours using microUSB.

Echoing the quirky and delightful design of the hardware is WonderWoof’s application which is currently on iOS, with Android coming in February. In the app you are able to create a profile for your pup, track its fitness measured in bones and see your dog’s location on a map. The app also acts as a social network for dogs where puppies earn badges for checking in at certain locations, like a bravery badge for its first visit to the vet and can see the activity feed of dogs they follow (or as the app calls it “sniffs”). Users can also use the app to set reminders for things like grooming appointments which sends reminders to users as text messages from your dog.

WonderWoof is available for pre-order on the company’s website and will be in select stores in the UK, North America and Japan starting in the Fall. The suggested retail price is $99. The team also plans to launch a cat version under the witty name WonderWhiskers. 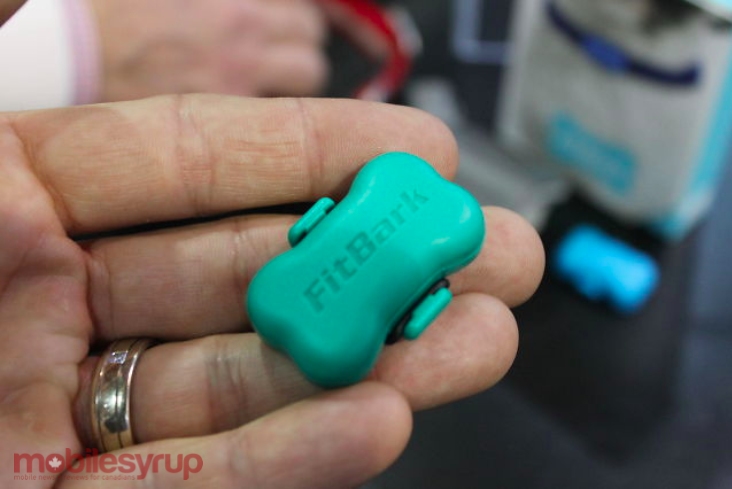 Shaped like a colorful dog bone, FitBark is a sensor-based activity tracker for your pet. The device features an accelerometer and boasts a battery life of up to 14 days. The device is waterproof and uses Bluetooth to send data it collects to an app on your smartphone.

The FitBark is like a Fitbit for dogs, focusing more on health and fitness than WonderWoof, but lacks as much of a social edge. FitBark’s app allows dog owners to really dig deep into the data, showing the dog’s activity in terms of rest, active and playtime over various periods of time. Access to this data not only helps dog owners understand their pup’s health, it can also help explain certain types of behaviours. Co-founder Sara Rossi told us a story of how she used FitBark to find out that her new puppy was suffering separation anxiety in seeing some unusually high peaks of activity during the day when she was gone. The app also equips owners with the ability to compare their dog’s data with the average for a dog of the same breed and size to help them be at their best.

The company is getting ready to ship its product to its Kickstarter backers later this month which is nearly a year later than expected. It recently expanded its online prescence on Amazon.com. And in Canada, FitBark announced its exclusive partnership with Best Buy and Future Shop which will see this pet wearable available beginning later this quarter. For now FitBark can be pre-ordered online for $99. The FitBark iOS app is expected to officially launch in the App Store later this month with Android and a web app to follow later this spring. 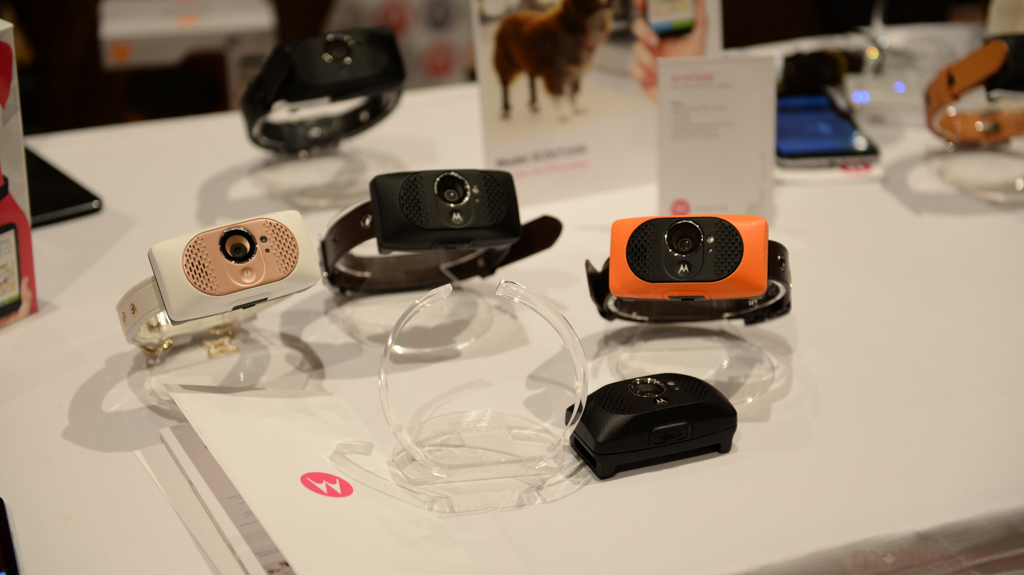 Tagg has been in the pet wearable space since 2012. The company recently launched the next generation of its device which works as a GPS tracker and activity monitor for your dog. The waterproof device is more focused on function than fashion compared to FitBark and WonderWoof, with more advanced technology and a longer battery life if paired with the short wave radio docking station that doubles as a charger. 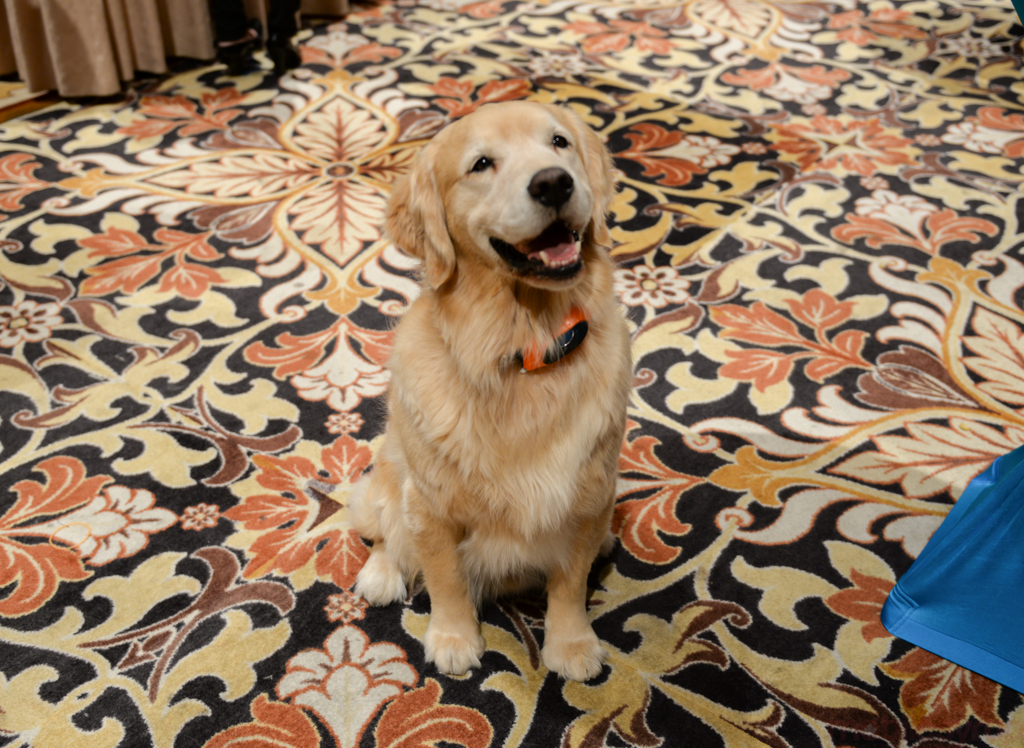 Tagg acts as a fitness monitor for your pet, collecting data on its activity and then providing users with a visuals of this activity in its companion Android or iOS app. But the biggest differentiator for Tagg is its tracking capabilities. Tagg offers nationwide coverage (US only at this time) to keep tabs on where your pet is 24/7 using GPS and a cellular signal. Users will be alerted via notification on their smartphones if their pet is away from home or leaves a geofenced area, and will be able to see where there pet is on a map in the app at all times. The device also features an ambient temperature sensor which will alert owners if there pet is in an environment that is too hot or too cold.

Tagg is a much more expensive pet wearable compared to WonderWoof and FitBark retailing at $119.95 and requiring a monthly subscription. At this time, Tagg is not available in Canada. 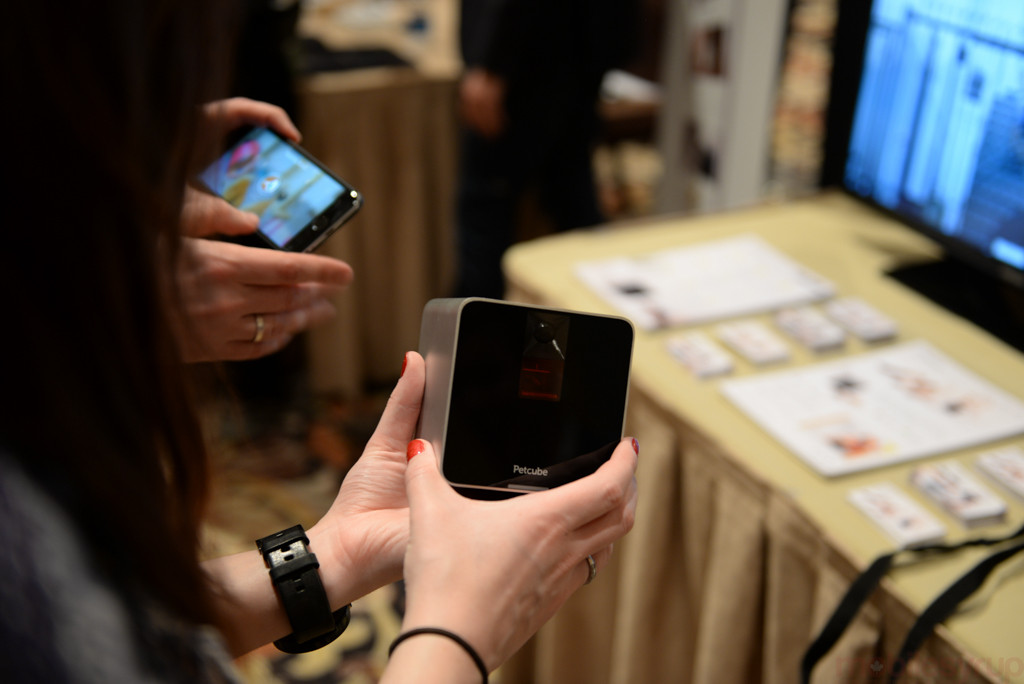 In the last decade and a half, the internet has evolved almost beyond recognition. It’s gone from the information superhighway to more of a choose your own adventure, interactive playground. There’s also a ton of cats, which is awesome. In fact, we’re pretty sure that cats are the currency of the internet. If that’s true, the folks at PetCube have struck gold.

This company was at one of the evening showcase events that take place at CES after the show floor closes. Yeah, after making you walk the 2.2 million square feet of show floor during the day, they figure you’ll want more-of-same in a hotel ballroom that’s a 30 minute walk in the opposite direction of your hotel. For us, PetCube was a highlight of the night.

It’s basically Dropcam for pets. This silver box contains a camera for watching your feline or canine friend. You can then log into the companion app via your smartphone and watch you pet while you’re not home. 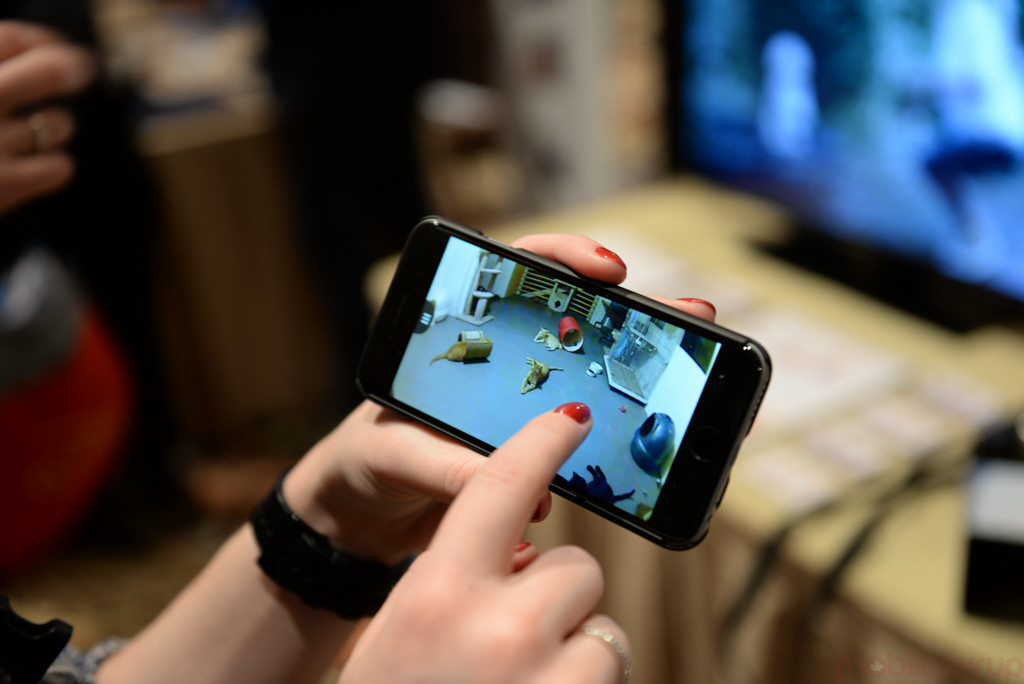 That’s not the most exciting part, though. The clincher is the ability to interact with your pet. You can talk (or give commands like, “Get off the couch!”) to your pet thanks to an integrated speaker, and even play.

The PetCube has a built-in 5mW 3R class laser that sits above the camera and can be controlled via your phone. You log in, click play, and then use your finger to drag that little red dot across your living room while you’re sitting in your office across town or in a hotel thousands of miles away. We got to play with three adorable cats in a shelter in San Francisco as well as a dog and two cats in Oakland. The best part? If your cat isn’t the playful type, you can check out other pet owners’ shared feeds and play with their animals.

PetCube costs $199 plus $30 for international shipping. 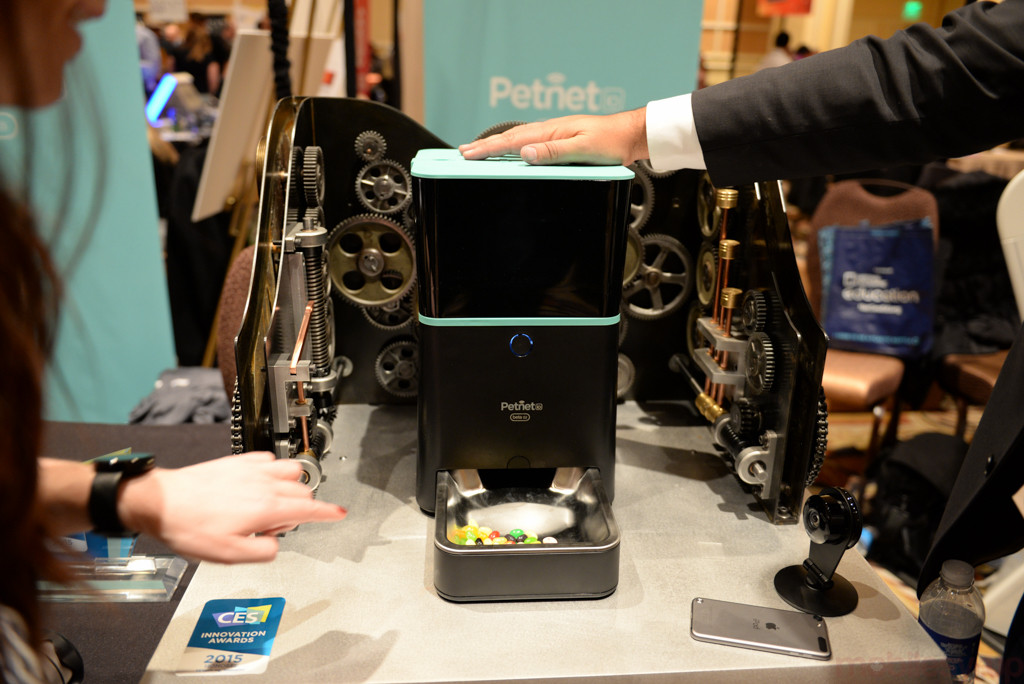 A lot of the smart pet gear at CES revolved around exercise or pet monitoring systems. However, there was also a company there hoping to revolutionize the way we feed our pets. The company has taken the idea of an automatic food dispenser (which can be as simple as releasing food once the bowl has been emptied) to the next level.

The PetNet feeder manages and monitors your pets dietary needs with the help of a companion app. You can feed your cat or dog remotely (via the app or the web), set up automated schedules with specific feeding times, portion sizes and dispensing speed, and receive alerts about your pet’s eating habits. This includes notifications on food inventory as well as meal confirmations, and battery life of the device. 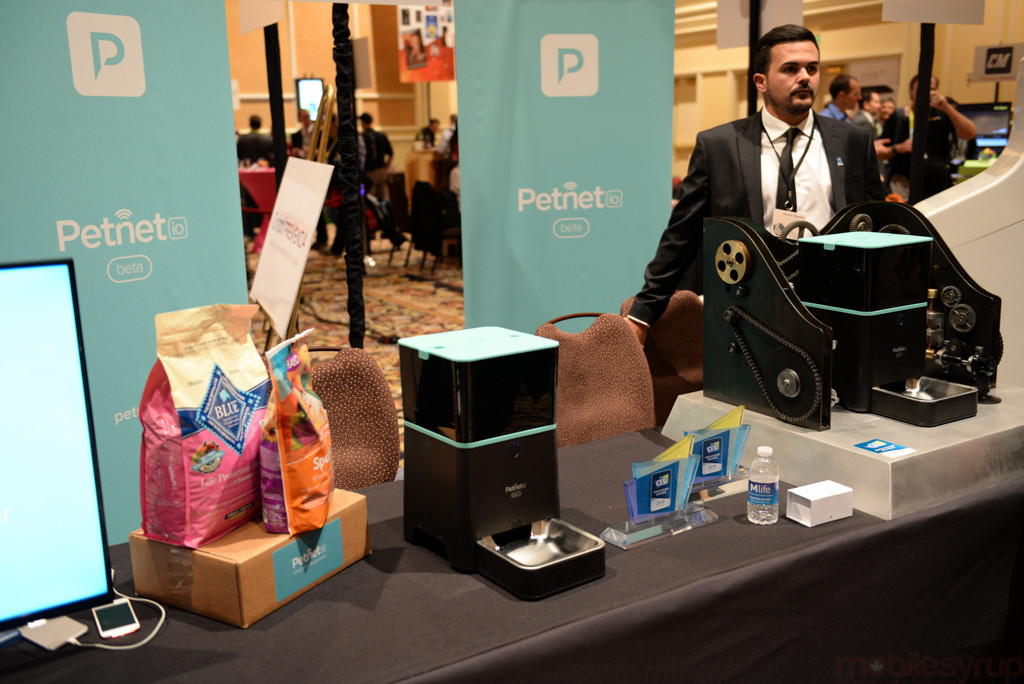 Beyond simple feeding and scheduling, the PetNet will also offer you insights based on your cat or dog and the food they’re eating. You might, for example, not be feeding your dog or cat enough (or, more commonly, be overfeeding). PetNet figures out how much your cat or dog needs based on their weight and the kind of food you feed them. It can also offer more appropriate foods based on breed. Best of all, because PetNet is “basically a pet food supplier,” you can set up deliveries of food and a new bag will arrive just when you’re running low (after you’ve verified the purchase with Apple Pay, of course).

The PetNet won’t be out until Q4 (international orders will be accepted) but it’s available for reservation today. Full price will be $249 but reservation orders are priced at $199.