What at first appears to be a minor update over the G3 is a thorough revisiting of what made the company’s past devices successful, eschewing aging visuals on the software side while doubling down on LG’s diverse component successes. 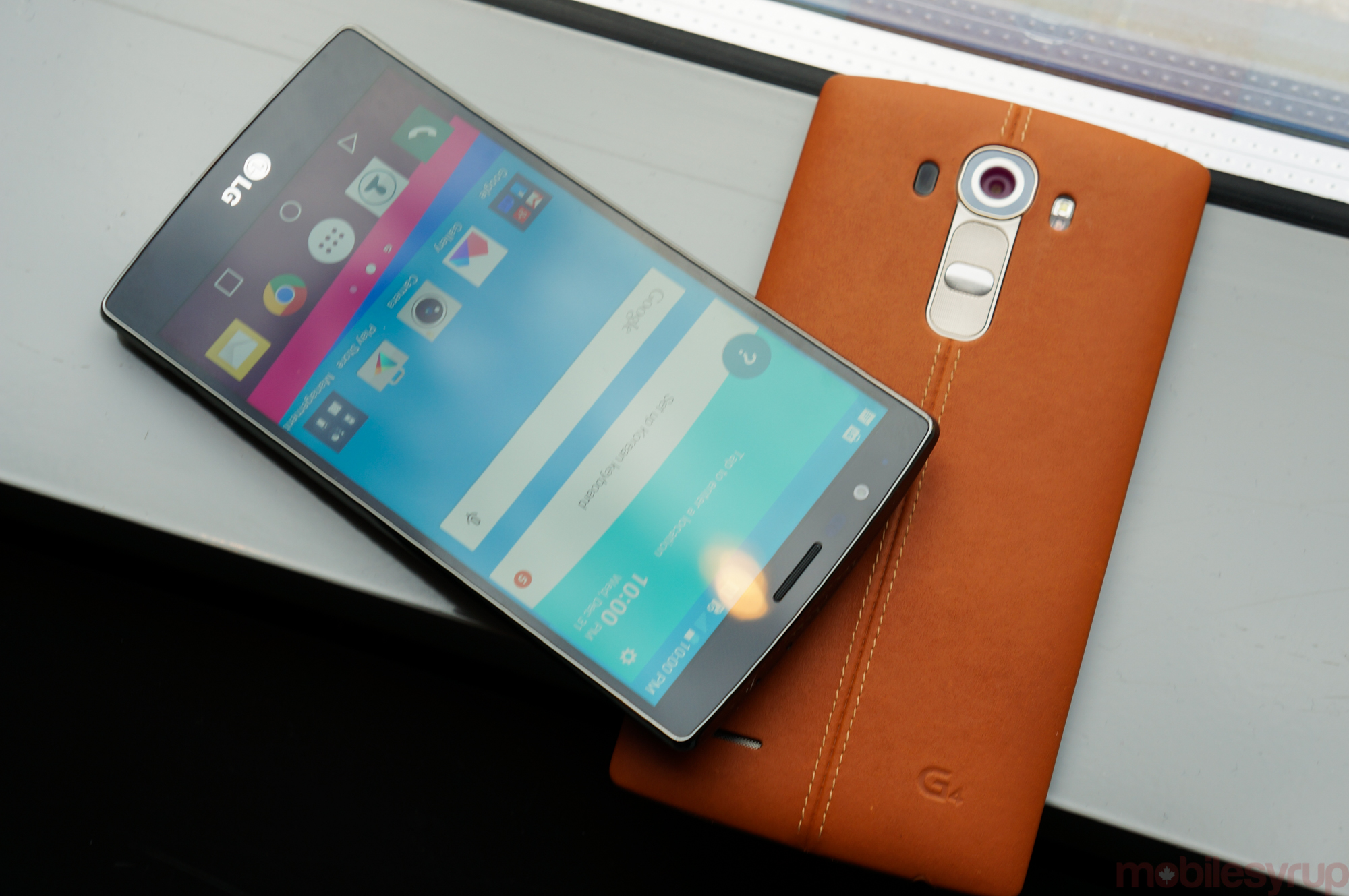 At first glance, the device appears largely identical to its predecessor, though there is some refinement in the build quality. The phone is ever so slightly taller, with squared-off sides that make it easier to grip. These sides also slope in to meet a screen that takes subtle cues from the G Flex series; it features a top to bottom curve of under five degrees, which LG claims increases drop durability by 20% over the G3.

The rear button configuration is unchanged from the G3—and G2, for that matter—but the power button sees further refinement, a rectangular protrusion more immediately differentiated from the phone’s textured volume buttons.

There’s a maturity and confidence to the design of the G4 that was missing from last year’s version, though its fundamentals remain the same. Perhaps it is, like a sculpted face, the angles; it also could be the darker finish to the front and sides. And if that isn’t enough, there’s always leather. 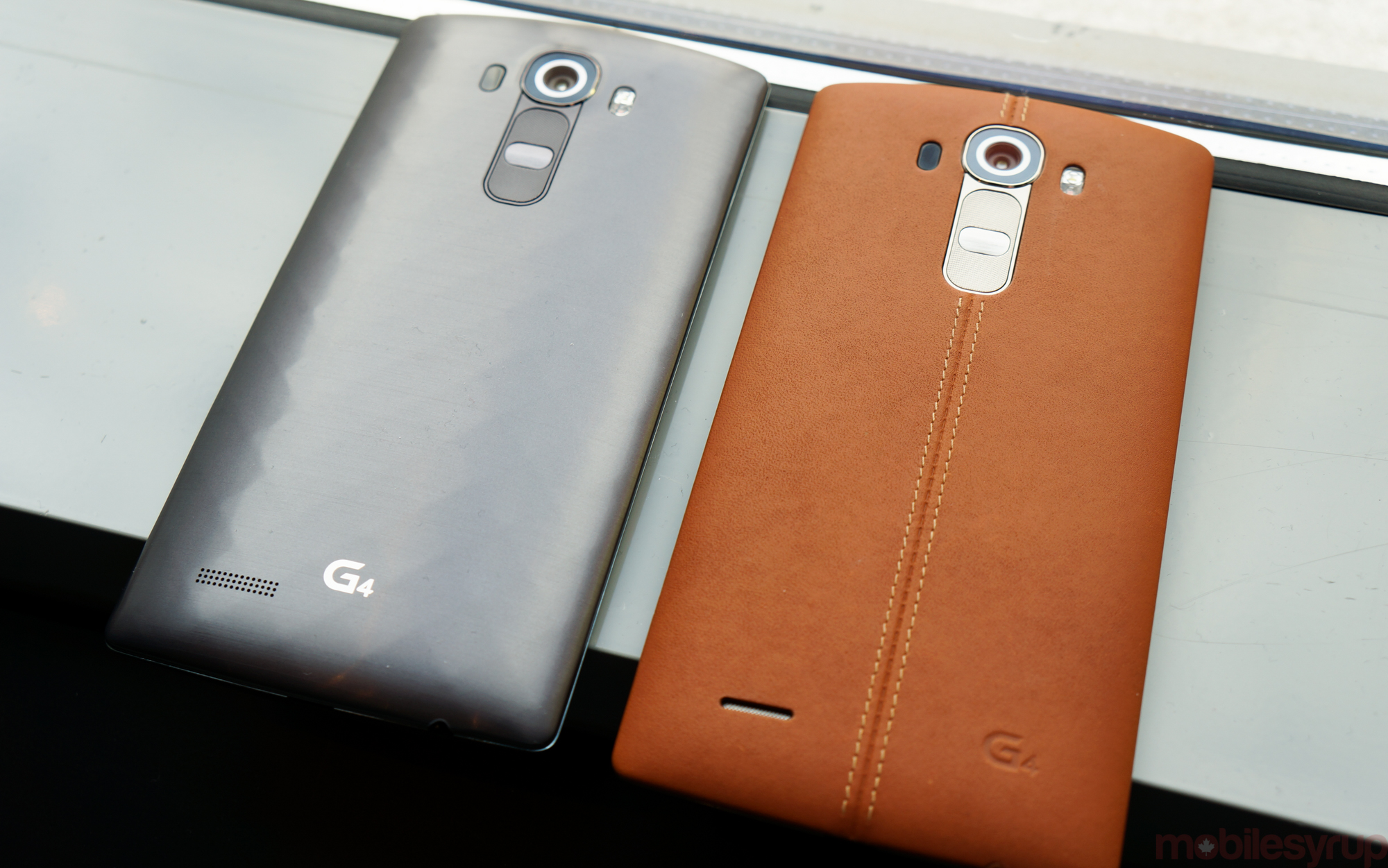 As we saw from numerous leaks and teasers, the G4 will come with the option of five colours of vegetable-aged leather, a process that takes three weeks, the company tells me. The colours, white, black, yellow, red and tan, are distinctive in both their hue and finish, but all are finished with a handmade “racing stripe” stitch down the centre of the back. These replaceable backs don’t come standard, and pricing hasn’t been announced for Canada just yet, but there are three painted ceramic backings, all with checkerboard patterns that add some much-needed grip to the plastic: Shiny Gold, Ceramic Craft (dark) and Ceramic Craft (white).

All this is well and good, but it’s when you turn the device over, and the screen on, that you see the biggest improvement to the device year over year. The 5.5-inch 2560×1440 pixel display is astonishing in its sharpness, sure, but so too was it on the G3. It’s everywhere else that shows how much difference a year makes. 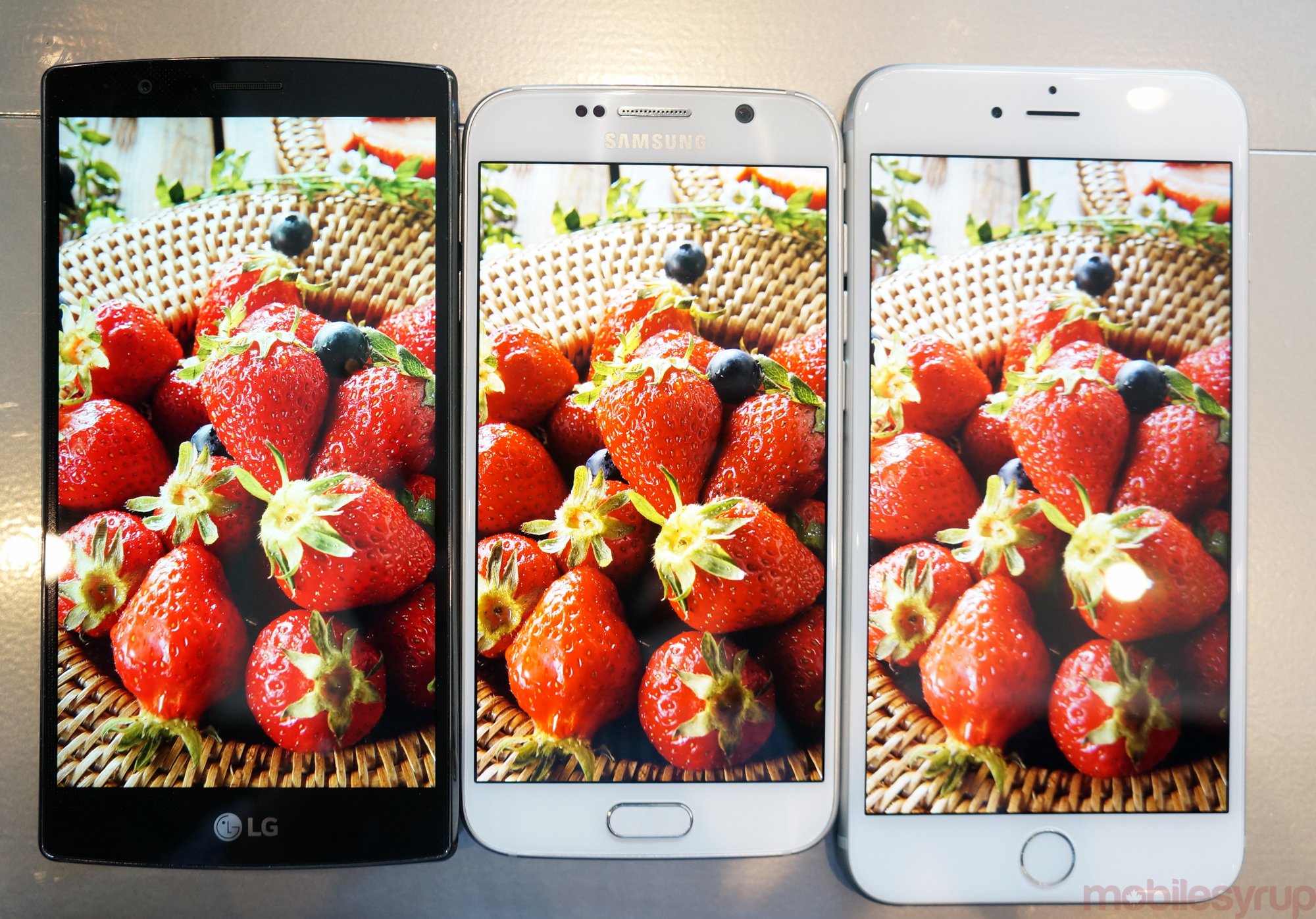 First, the colours: between this screen and the Samsung Galaxy S6’s 5.1-inch QHD panel, an arms race for top display has developed overnight. While the S6’s screen is sharper, colours on the G4 are outright insane in their accuracy. Viewing angles, outdoor brightness and touch responsiveness, too, are thoroughly impressive. And gone, thankfully, is the sharpening around text that sent many reviewer into a tizzy last year. Halo-free and without a hint of compensation, the biggest compliment I can give to the G4’s display is its cleanliness; there is nothing distracting you from enjoying the phone’s content. 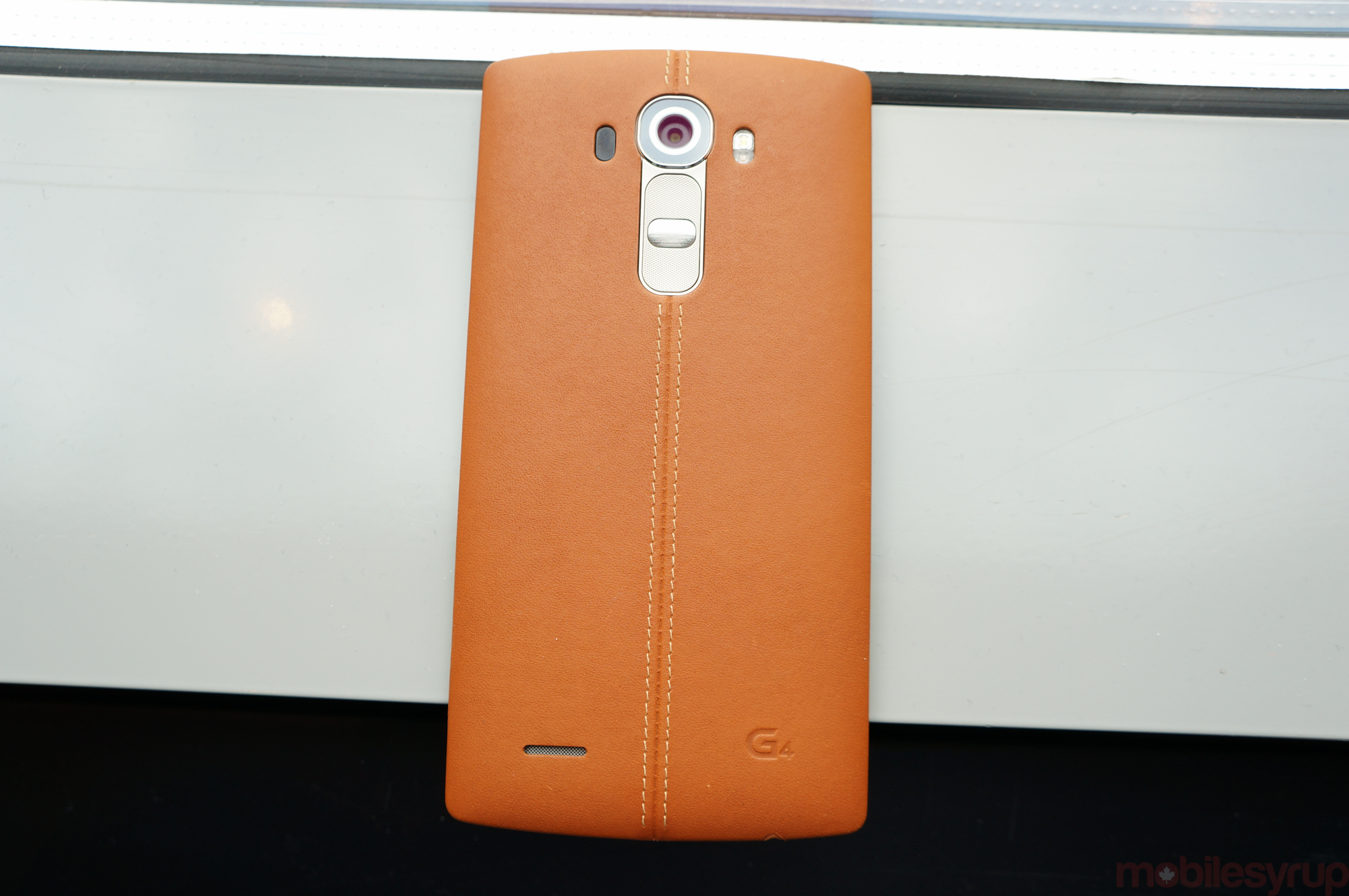 Moving inside, the rumours are true: this device forgoes the Sauna on a Chip Snapdragon 810 for a toned-down Snapdragon 808. The fundamentals are the same, fewer two Cortex-A57 cores and a slightly slower Adreno 418 GPU. LG assured me that users won’t notice a difference in day to day performance, but tell that to the average Android enthusiast. The average average smartphone buyer will certainly not care two winks, and it appears, based on early benchmarking, that LG made the right decision. Synthetic benchmarks scored nearly identically to the HTC One M9 and Samsung Galaxy S6 in single-core mode, and multi-threaded tests scaled linearly. We’ll have to spend more time with the device to make more astute observations, and to see whether battery life is inversely affected.

Unchanged from last year is the memory configuration, with the same 3GB LPDDR3 RAM as the G3, with 32GB of storage and microSD slot for expansion. The out-of-box availability is 23GB. This being LG, the company stuck to a microSIM slot, which is great for anyone upgrading from a two year old phone, but most newer devices, from the Galaxy S6 to the iPhone 6, Nexus 6 and Moto X, have moved to the nanoSIM standard. 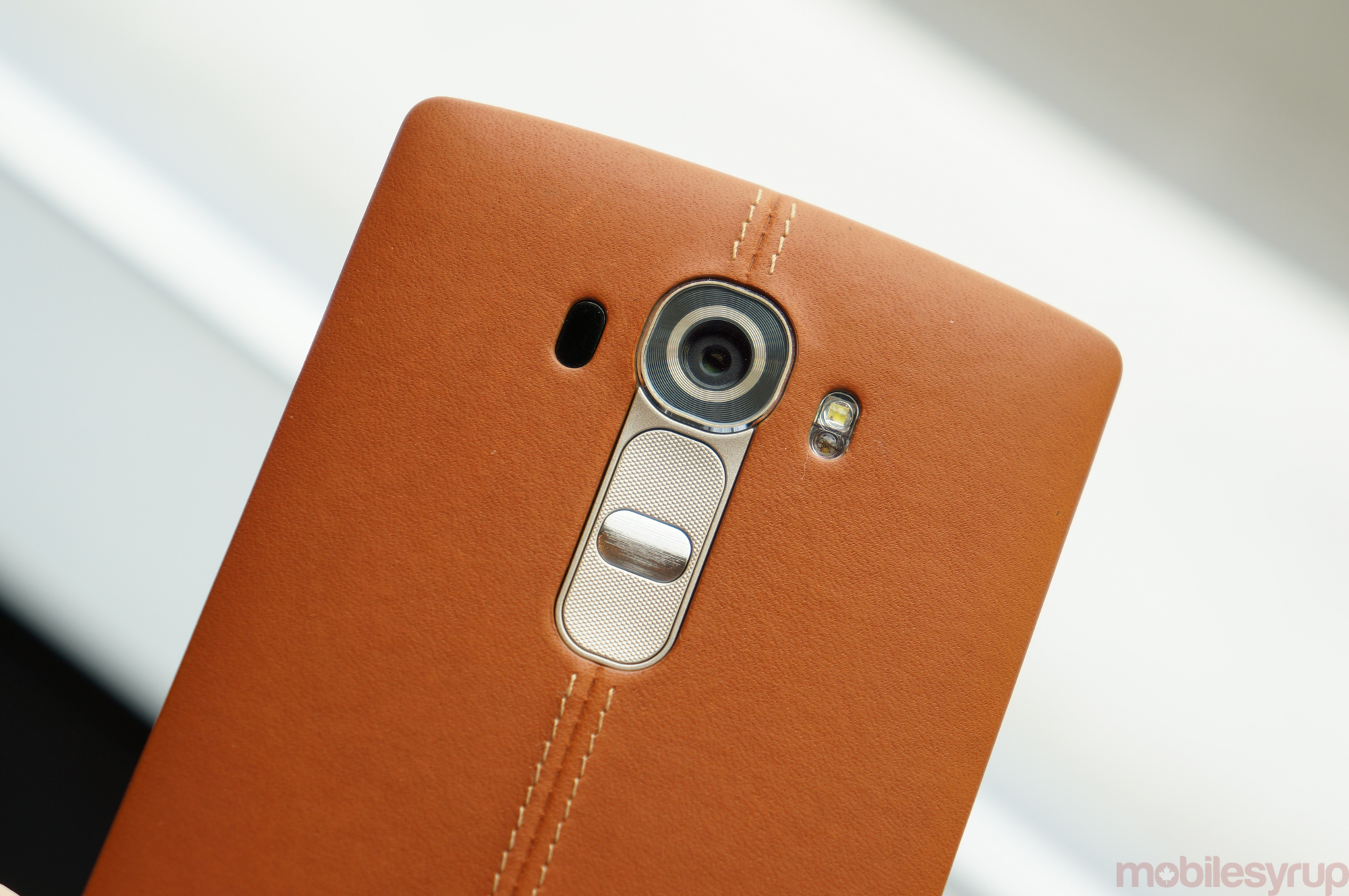 Arguably a more important upgrade than the display is the camera. The 16MP rear shooter is a clear upgrade over last year – while we’re still investigating, it appears to be using the same sensor as the Galaxy S6 – but the biggest improvement comes in the lens. Moving once again to one-up Samsung, the F1.8 lens is a full quarter stop lower than the S6’s, affecting both the depth of field and the amount of light the sensor can capture.

We’ll be putting the G4 up against the S6 in the near future, but until then know this: LG is taking its camera very seriously this time around. Not only has the image stabilization been beefed up for a third year in a row, but the laser autofocus module has been once again sped up. Then there’s the new QuickShot camera shortcut that, once again is faster than the S6 at 0.6 seconds, requires a double tap of the volume down button to instantly enter the camera app, focus and take a photo – all in one pre-defined action. 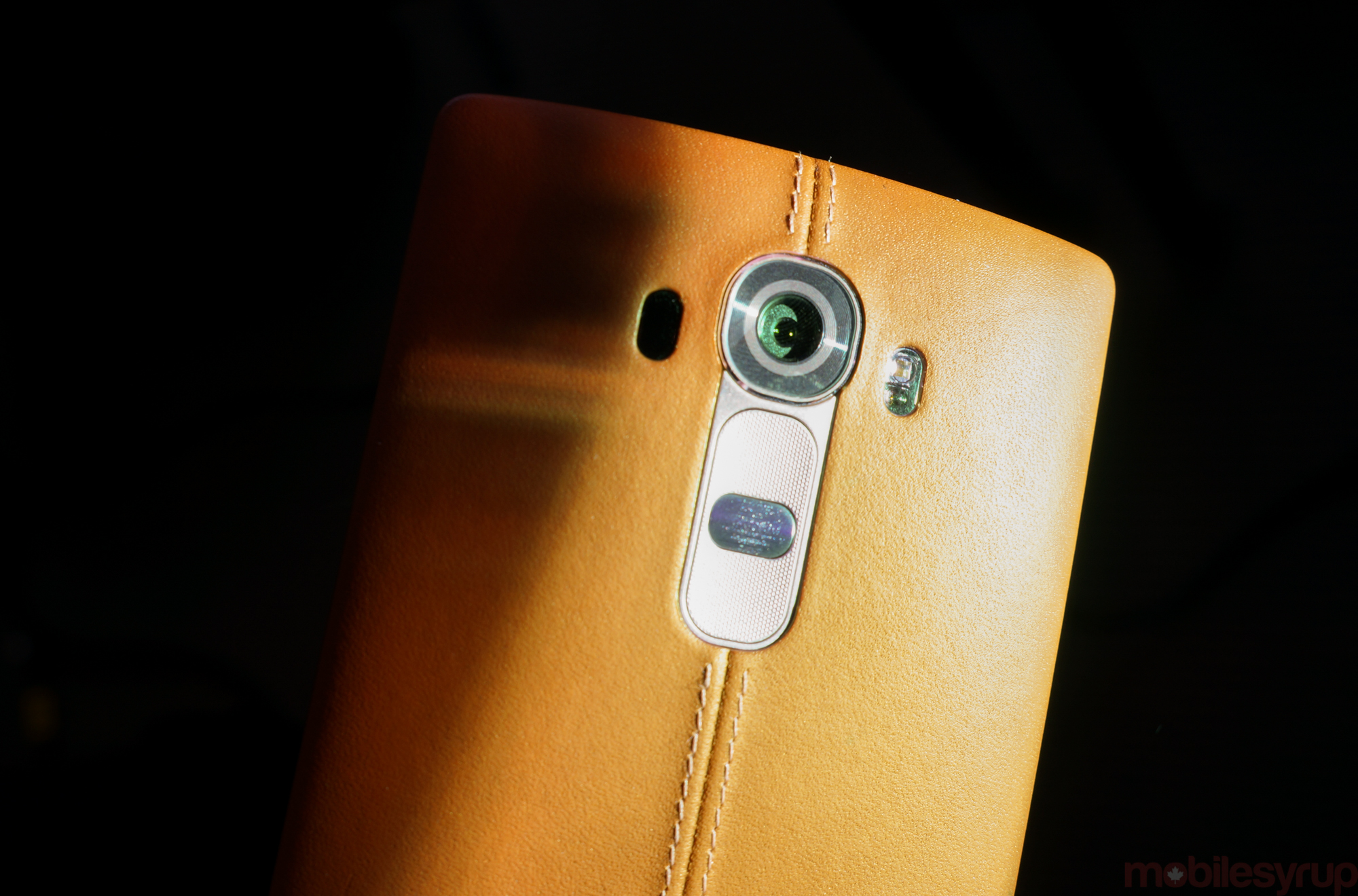 LG also moved to make its manual controls a lot more powerful this time around, extending granular settings to ISO (50-2,700); shutter speed (1/6000 – 30″); 51 white balance levels; and RAW support, among others. In my short time testing the device, not only was low-light performance excellent, but the colours were true, rich and without the over-sharpening applications that often get applied to LG stock.

One of the more interesting aspects of the G4 is its software; while it looks nearly identical to that of the recently-Lollipopped G3, it is running Android 5.1 out of the box, and the company’s designers tightened and beautified many areas of the UI that needed sprucing. It no longer feels like, as the G3 did when it launched, like a poorly-translated port of a Korean language operating system. Labels are properly capitalized; alignments are centred; colours (usually) don’t clash; and performance is largely excellent.

We’ll have lots more on the LG G4 in the coming weeks, including carrier pricing and specific availability. We’ll also learn how LG plans to distribute the custom leather backs, and whether Canadians will get a chance to buy them, either at the time of purchase or as an additional accessory, like a replacement battery – which, once again, LG supports.