Motorola hasn’t rested on its laurels in the twelve months since it released the original Moto 360. Despite being at the top of the Android Wearable heap, the company has endeavoured to find new audiences for its top-selling smartwatch, with this year’s model featuring a revamped design and choice of smaller or sporty cases.

While the name remains the same — no Moto 360S or L as was so often leaked — the new version is available in two core sizes, 46mm and 42mm, as well as a waterproof and GPS-sporting Moto 360 Sport, which is coming to market later this year. 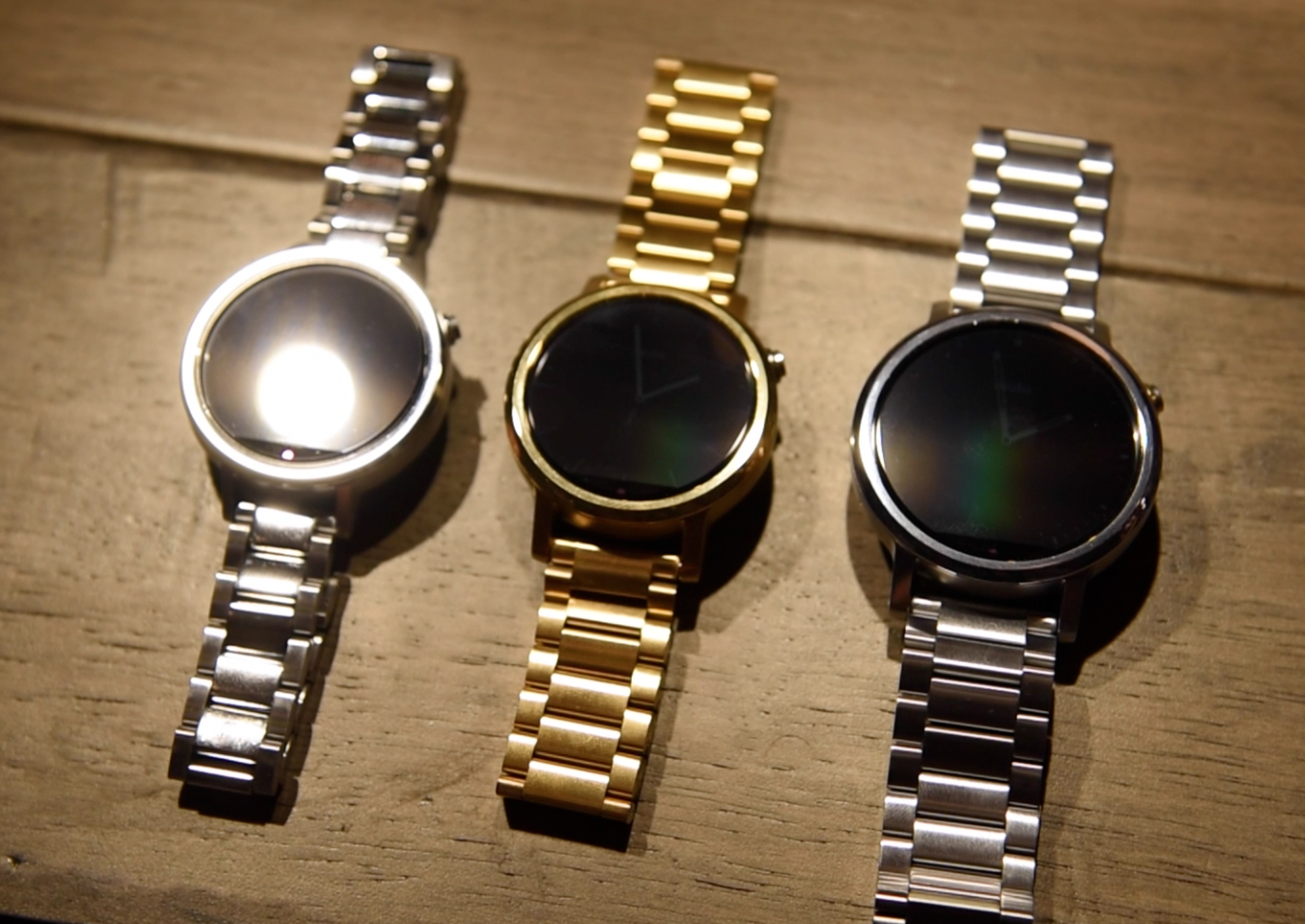 But perhaps the most impressive and interesting turn of events from the announcement is the presence of a Women’s Collection, which features the same 42mm case with a smaller, tapered watch band connected to a pair of exposed lugs.

Those exposed lugs are one of the main differentiators between this year’s model and last, allowing for quick changes of bands — the number of which has increased in both variety and quality — with a new quick-release mechanism, along with a relocated power button, now at a 2 o’clock position. 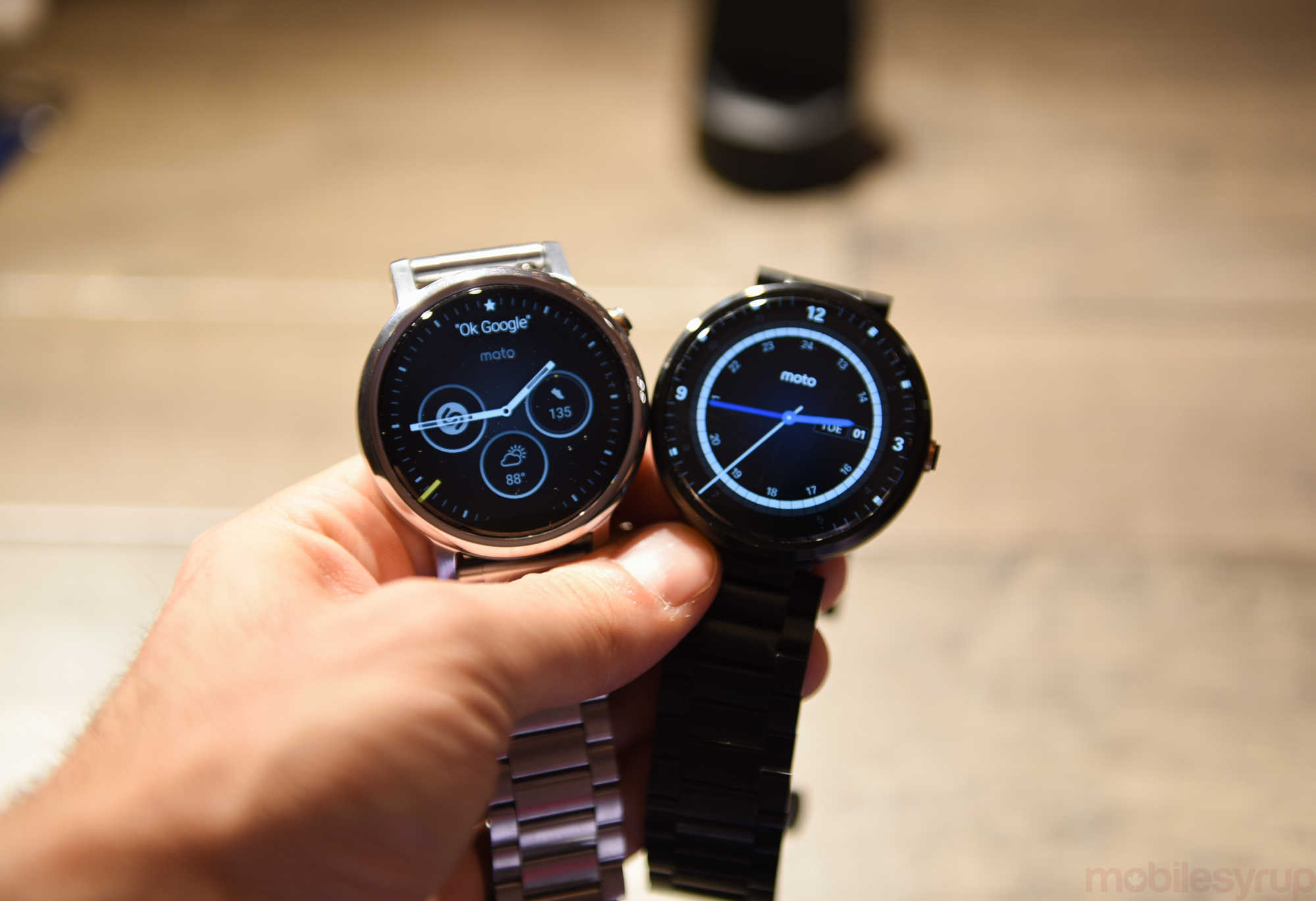 The 46mm model shares a nearly identical appearance with last year’s version, lugs and button placement aside. The casing is a scant 0.1mm shorter this time around, at 11.4mm, and that flat tire — what Motorola calls its “shelf” — has reappeared, much to the chagrin of almost every customer of the first-generation model. 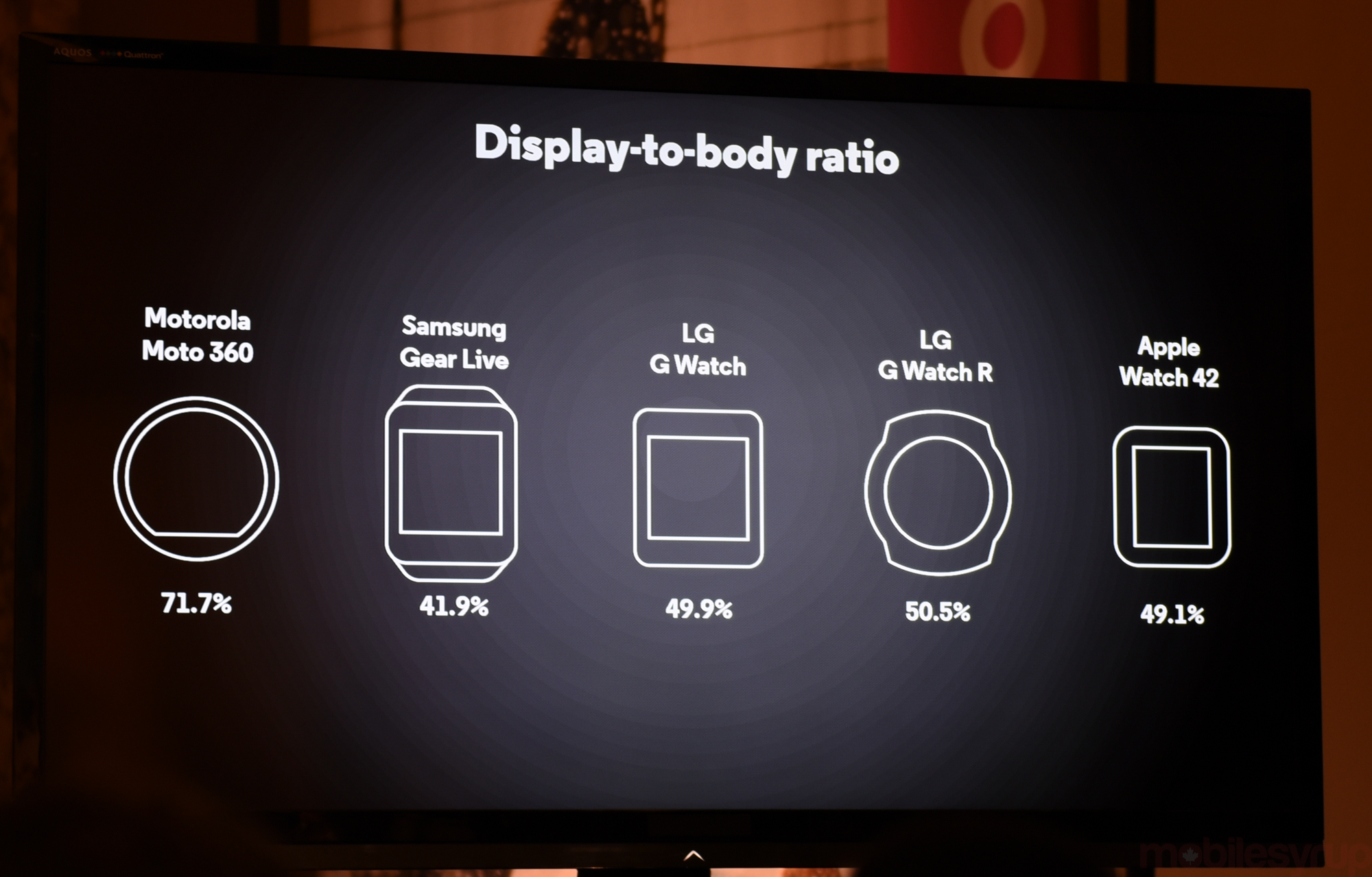 Motorola’s head of design, Jim Wicks, explained that currently there is no physical way to embed the sensors in the bezel without increasing their size, and his team’s priority in designing the new version was maintaining its industry-leading screen-to-bezel ratio. And at 71.7 percent, it’s significantly more than any of its competitors, including the Apple Watch, but what Motorola fails to mention (but obviously realizes) is that a circular smartwatch loses much of its information density by cutting off text in the area equivalent to the corners of a square smartwatch. 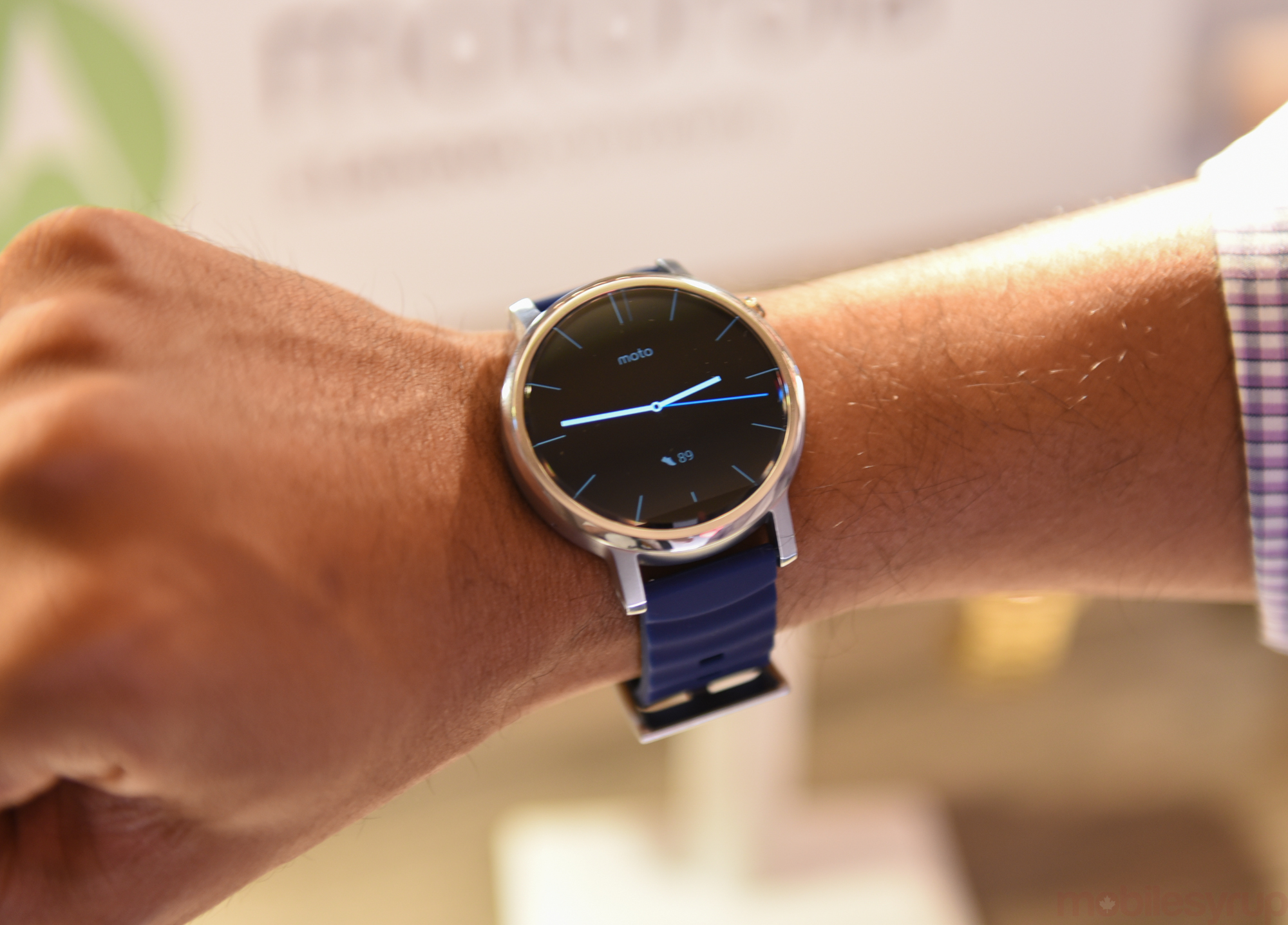 But numbers can only convey so much: in reality, these screens are sharp, and considerably more enjoyable to look at and interact with than before. They’re still covered with Corning Gorilla Glass 3, but the glass is cut in a more uniform way, avoiding the stylistic (and controversial) chromatic aberrations of the first-generation Moto 360. 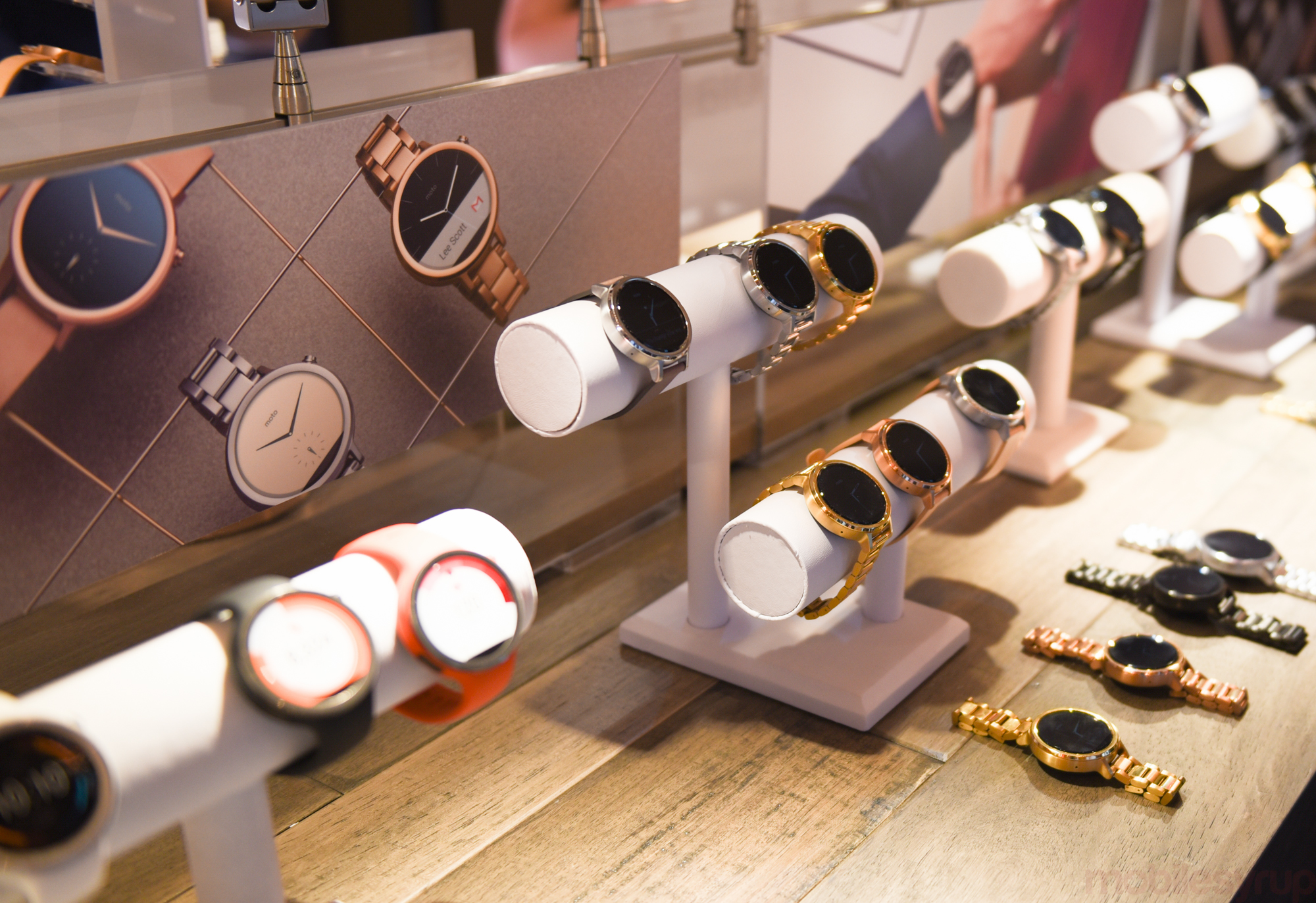 The display is also more enjoyable to interact with because the processor has been upgraded. Internally, the Moto 360 now has the same quad-core Snapdragon 400 processor and 512MB of RAM as every other Android Wear device, a considerable power boost over the three year-old TI OMAP3 chip inside last year’s version. It doesn’t appear that OEMs like LG and Huawei are eager to increase the processing power in their newest watches, either, so the Snapdragon 400 and its ample computational headroom may survive another 12-month cycle. 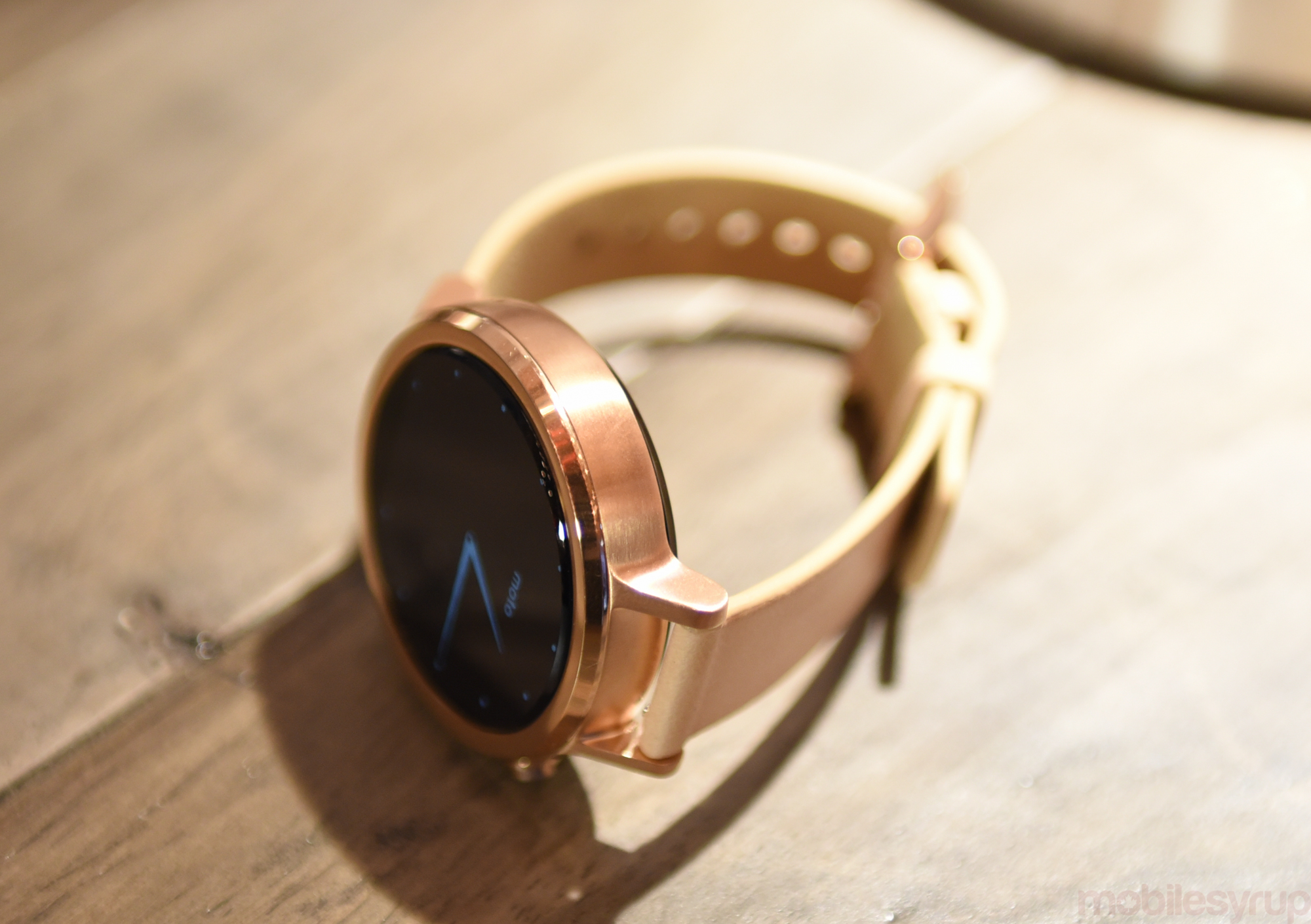 Despite being the same size as last year’s model, the larger of the two new Moto 360s now has a 400mAh battery cell, an 80mAh jump. The smaller of the two contains a 300mAh cell, but Motorola representatives promise superior battery life on both models, thanks to upgrades in power efficiency on some of the auxiliary chips and sensors. One Motorola official said that with Ambient Mode (the always-on screen option) turned off, users will get double the battery life, or roughly two days, with every charge. Considering the first-generation Moto 360 was one of the most temperamental smartwatches I’ve used, promises of smoothness and longer uptime between charges is music to my ears.

Speaking of music, the Moto 360 still contains 4GB of internal storage for Bluetooth-based music syncing, along with an improved heart rate monitor that can withstand the indignities of sweat, and a WiFi chip for synchronization when a smartphone is not nearby. The core models still lack GPS, which help track users better when running outdoors. That privilege is reserved for the Moto 360 Sport, which along with being water- and dust-proof, has a new screen technology called AnyLight that employs a variable monochrome effect to make the screen visible in extreme sunlight. 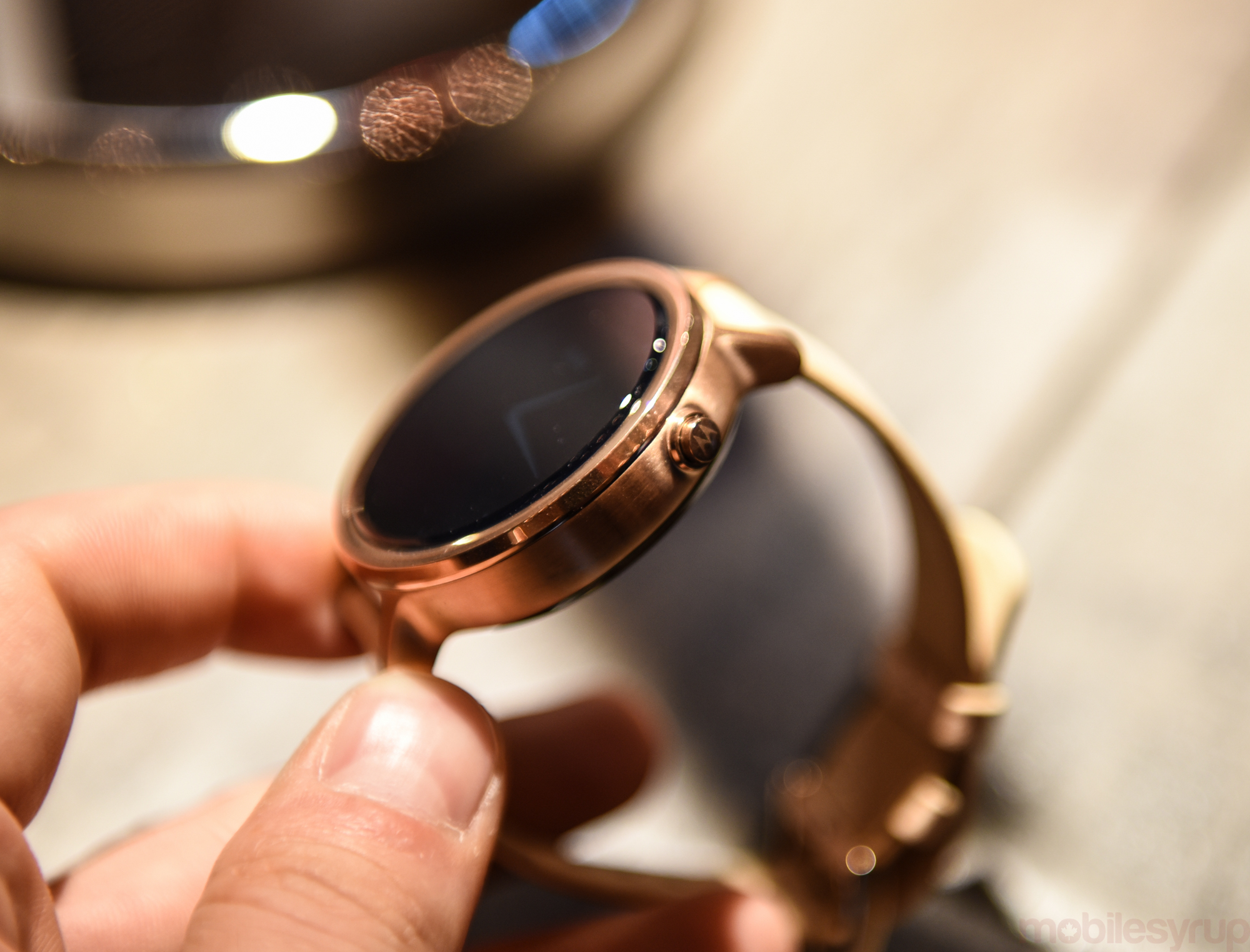 Users of the first-generation Moto 360 will certainly remember the hubbub surrounding Motorola’s implementation of Qi wireless charging, and how easy it made setting down the watch before bed. The same mechanism and dock are back for the second generation — it looks practically identical — but is unfortunately incompatible with the first-gen watch, and vice versa. It’s unclear why Motorola couldn’t maneuver backwards compatibility into the old watch, or dock, with the company vaguely citing “minor improvements” in charging speed. Disappointing.

With specs out of the way, the second-generation Moto 360 quickly becomes another entry into the canon of deliberate iteration. The company has shaved off many of the original’s rough edges, both literally and figuratively (its new shiny Stainless Steel bezels are carefully machined, adding a classiness to the finished product the original lacked), reinforcing the message it proselytized with the customizable Moto X in 2013: choice is the thing. 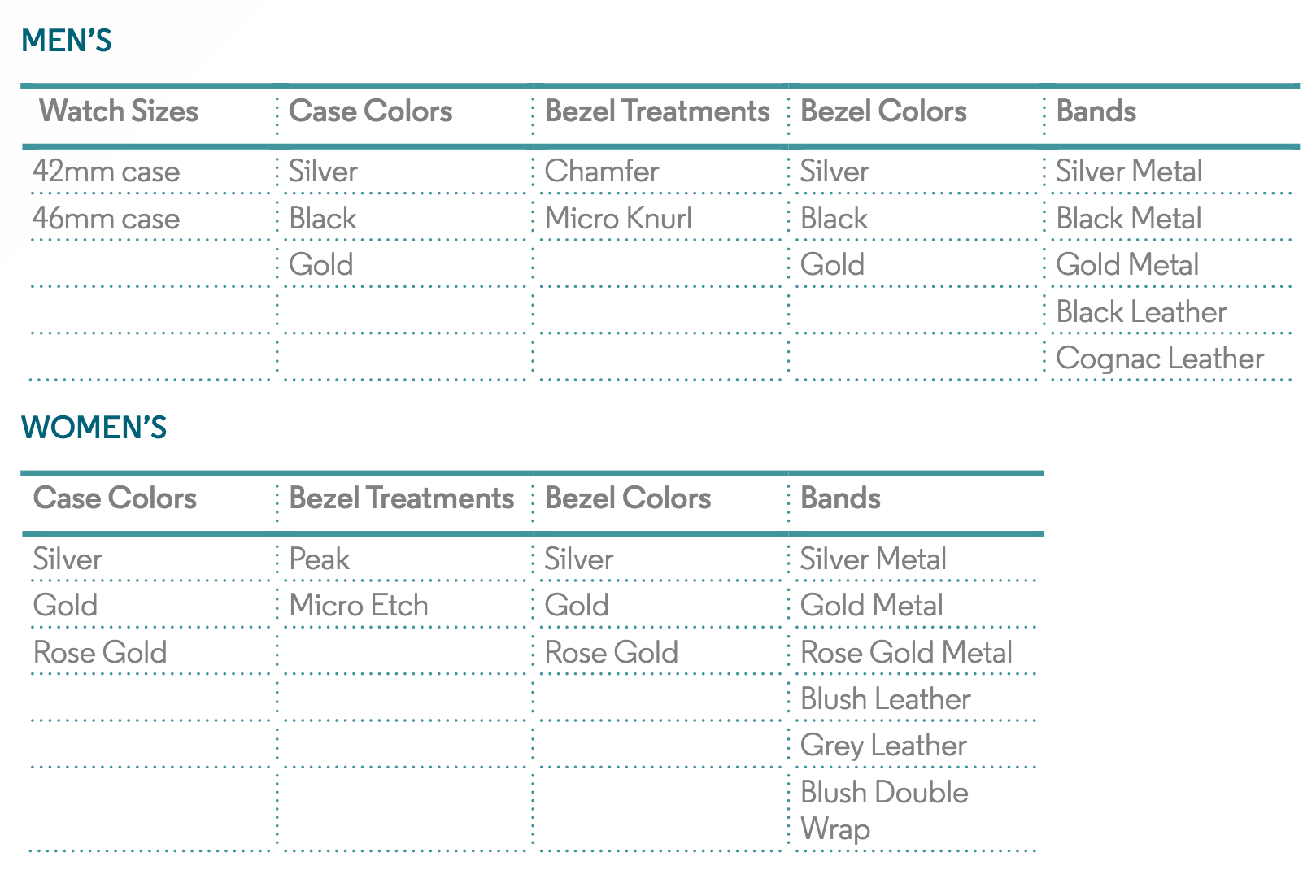 The women’s collection is even more robust, with options for silver, gold and rose gold casings; peak or micro etch bezel treatments; and the choice of six bands, including a double wrap case that designer Katie Morgenroth is confident will be extremely popular. 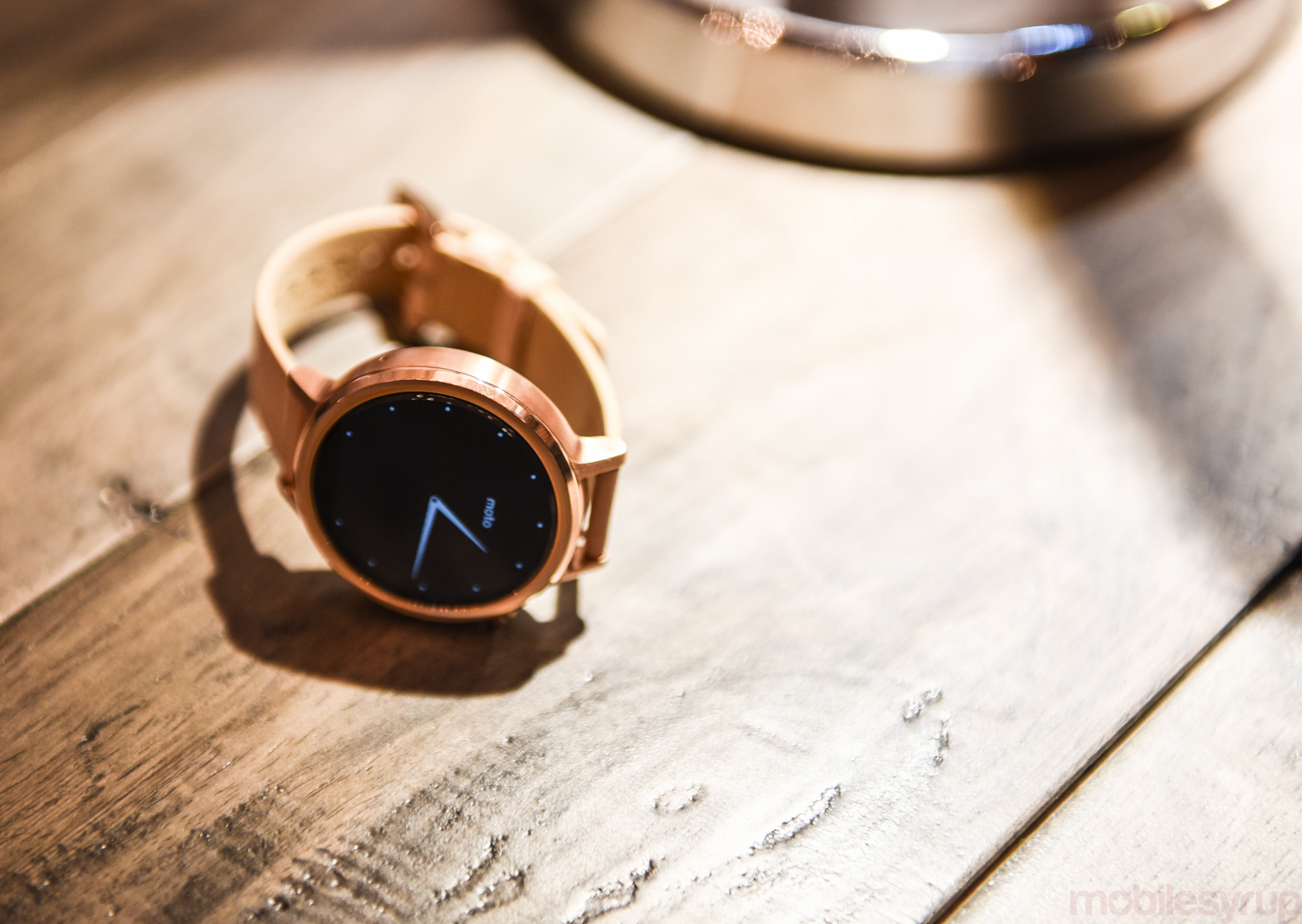 That Motorola is explicitly endeavouring to cater to women at all is sadly unprecedented in the smartwatch space. Earlier this year, former MobileSyrup writer Jane McEntegart wrote a scathing indictment of how the wearable industry perceives women — either as non-existent, or a conduit to choose form over function. Motorola appears to understand that women are merely another addressable market in a space that is still trying to transition past the early adopter.

The women’s collection is practically similar to the men’s 42mm models, but lean moderately towards elements, such as the rose gold casing, that may be culturally construed as feminine. That said, lots of men love rose gold, and Apple has had no trouble marketing two separate sizes of Apple Watch without calling out gender. 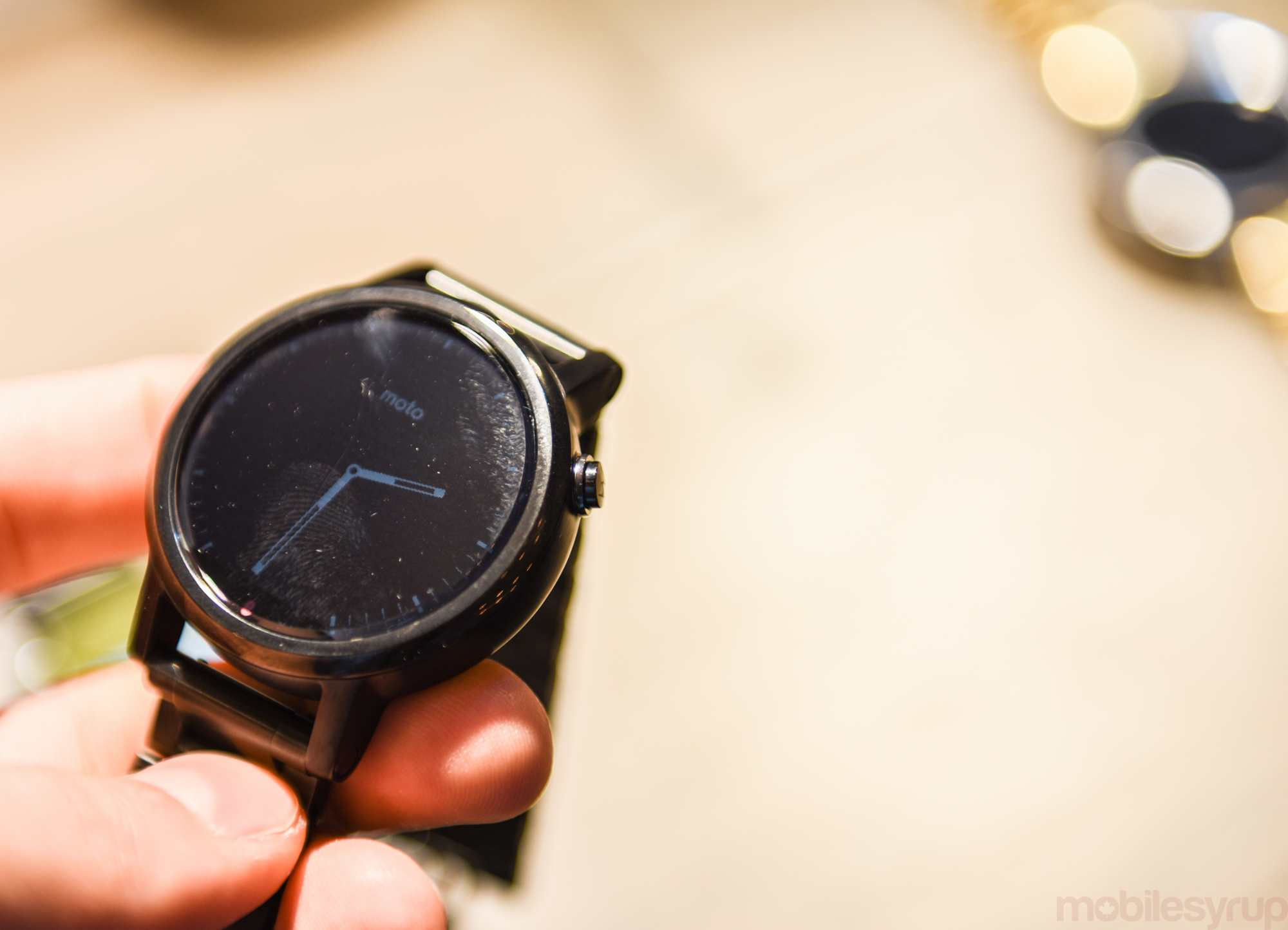 I got a chance to wear the 42mm version and found it to be considerably closer in size to what I’d want in a “daily carry” timepiece. The screen is sharp and readable, even from relatively far away, and the case doesn’t dwarf my relatively thin wrists like the 46mm version. Moreover, wearing the 18mm metal bracelet with the 42mm case feels considerably lighter and more maneuverable than the 46mm model paired with the 22mm stainless steel strap, which is the default size. (The main difference between the men’s and women’s 42mm collection, other than the varied colours and bezel designs, is the strap width: men’s is 18mm, women’s 16mm.)

Motorola is also touting a number of new watch faces that will only come to the new version. Called Live Dials, they utilize Google’s newly-announced interactive watch face feature introduced in Android Wear 1.3, allowing users to customize a number of complications to quickly launch into apps or check important pieces of information from within compatible apps. 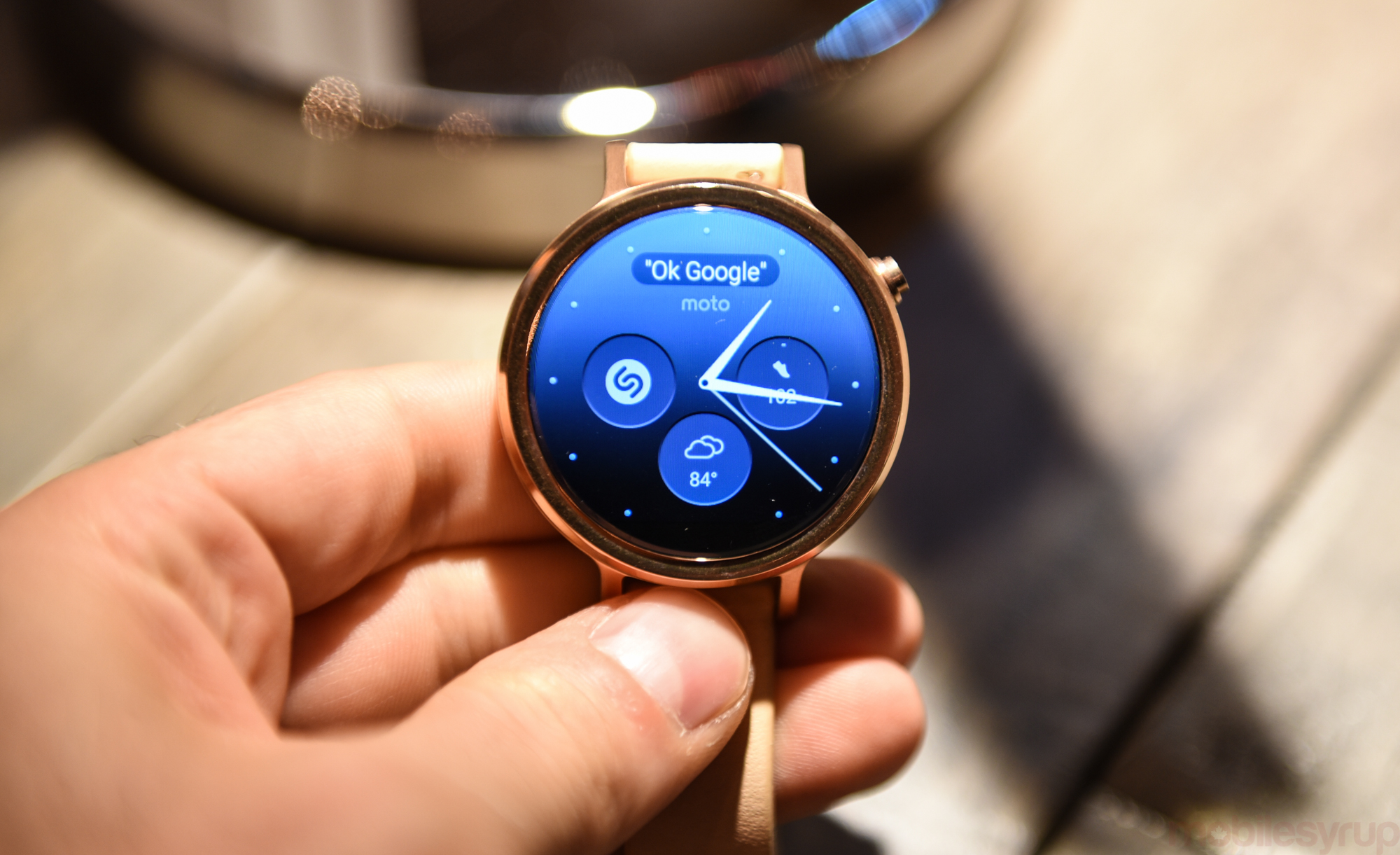 In truth, the Live Dials feature is something that all Android Wear watches have right now, but Motorola is curating a number of new watch face designs for the occasion, and is trusting that new buyers will be sufficiently impressed by the smooth and intuitive interaction model they afford.

Motorola also had on hand its Moto 360 Sport model, though they were demoing plastic models of the smartwatch, citing a release date of “later this year.” 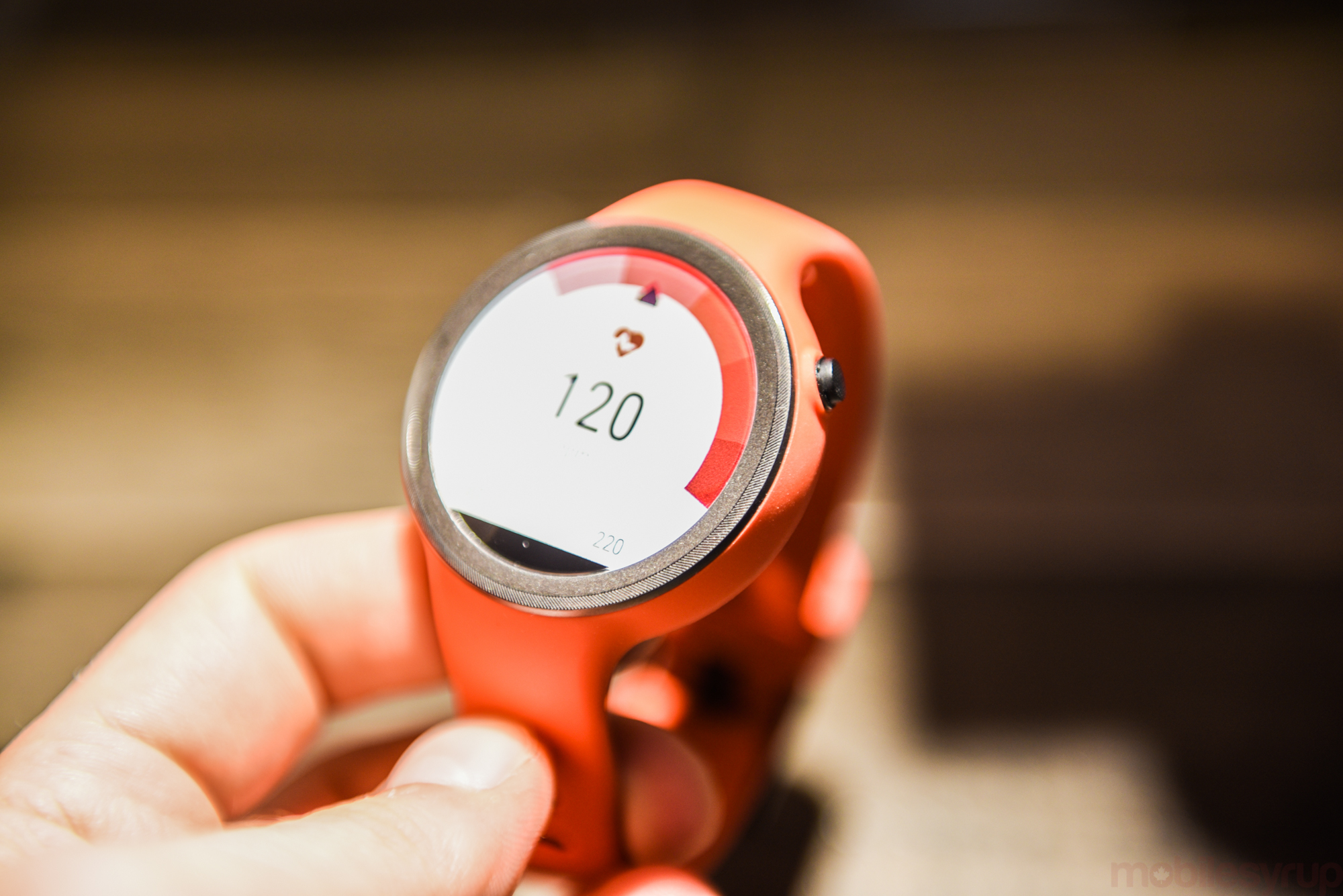 Focusing more on hardcore athletes that exercise daily — as opposed to the occasional runner or biker who may need the regular Moto 360’s Moto Body app to count steps and heart rate every couple of days — the Moto 360 sport is both waterproof and sweatproof, with a water-wicking silicone band that has a built-in GPS module. One Motorola representative told me that the company experimented with GPS in the regular version, but found that the signals would interact with the stainless steel case and throw incorrect readings. 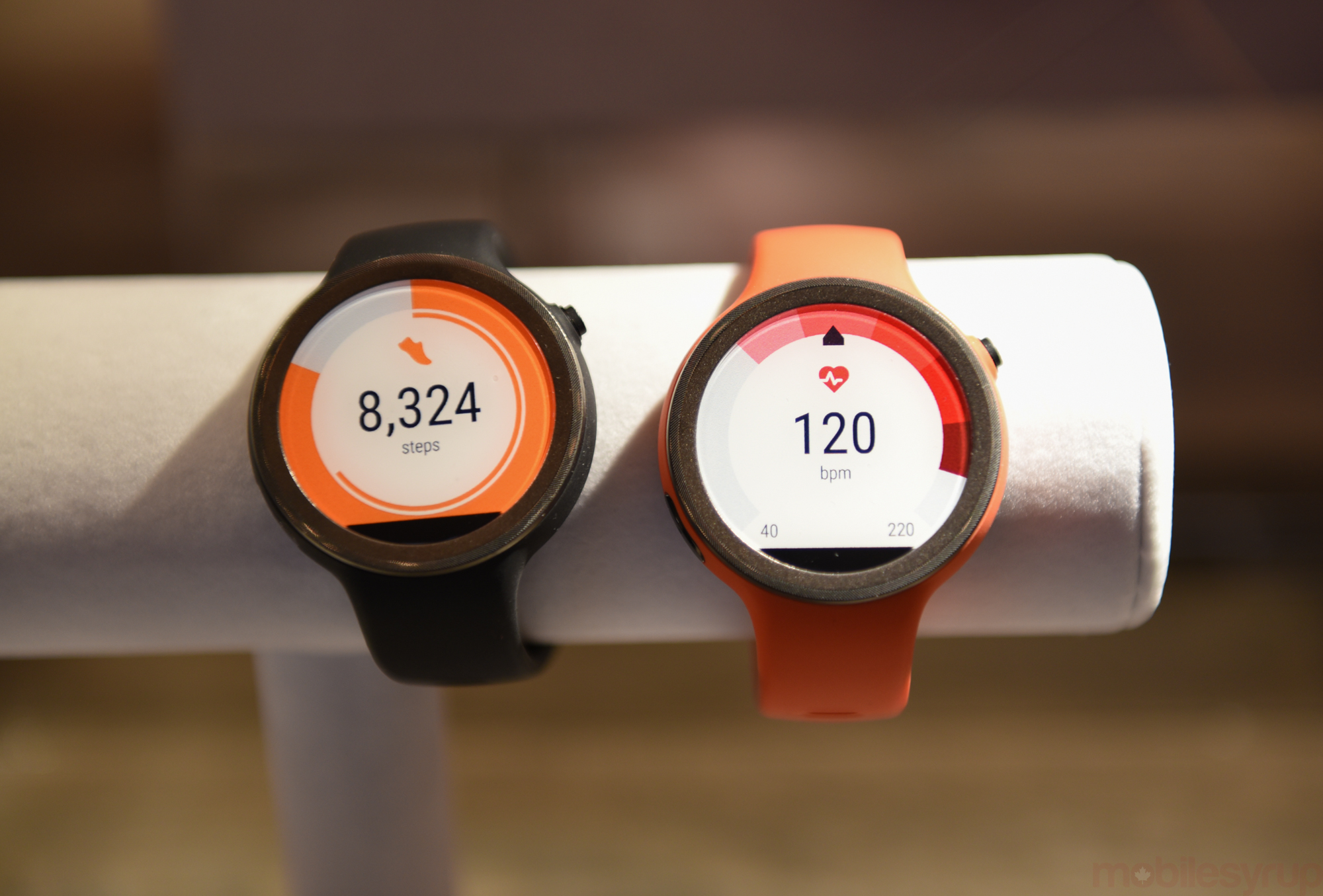 Available in a number of colours, such as white, black, red, and orange, the Moto 360 is going after the Garmins and TomToms of the world, utilizing Android Wear as the differentiator.  Motorola isn’t giving specifics on availability or price, nor battery life, but the models I tried on were definitely on the bulky side, and the lack of replaceable watch bands will likely severely limit its mass appeal. 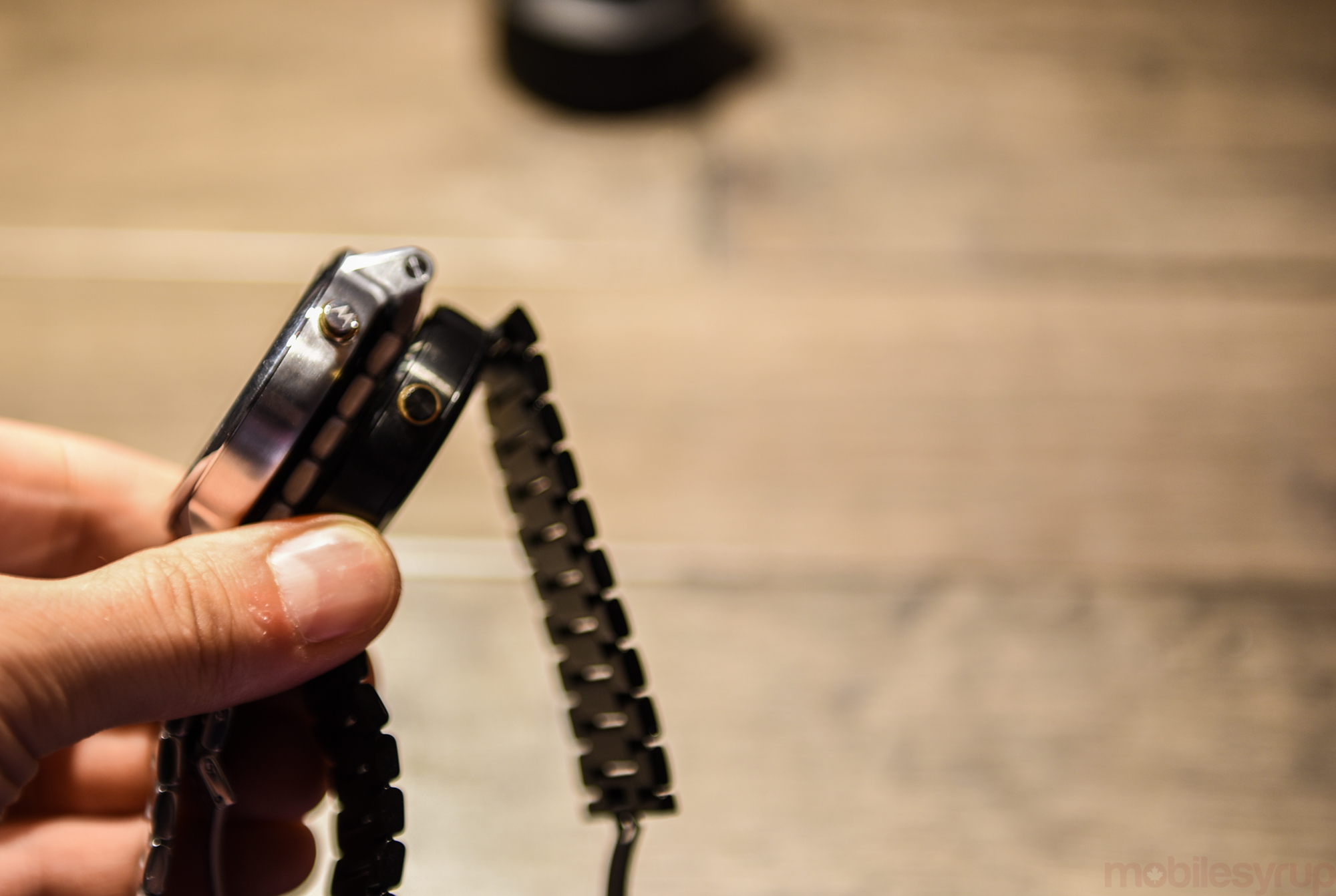 Motorola has done quite a lot in a year, but I fear most people will see a smartwatch that looks too similar to its predecessor, even in different sizes, cuts and styles. Small changes, like the power button being relocated to two o’clock to prevent errant jewelry from accidentally turning on the screen, or the small Motorola logo etched onto the side, are the kinds of nice-to-knows that help you admire the tireless design team behind the product, but there may not be enough here to appease owners of the original Moto 360. 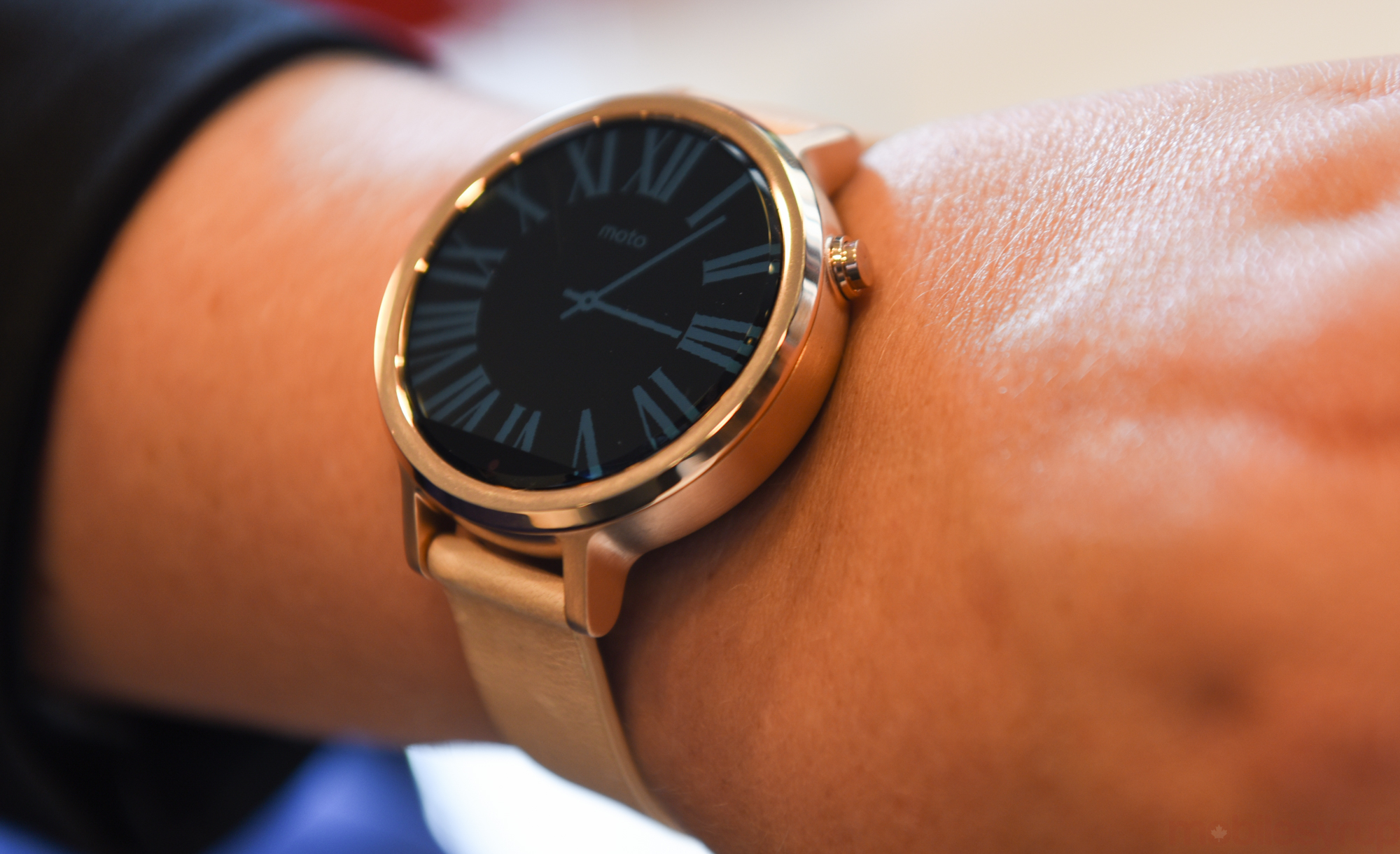 It’s clear, though, the Lenovo-owned company isn’t merely going after those early adopters. Like it did with the first couple of generations of Moto G and Moto E, its iterative upgrade cycle caters to buyers who are waking up to the idea of smartwatches in their own time. If they happen to be looking for one now, or near the end of September when the Moto 360 becomes available in Canada, they’ll have more case sizes, band options and materials choice than ever. 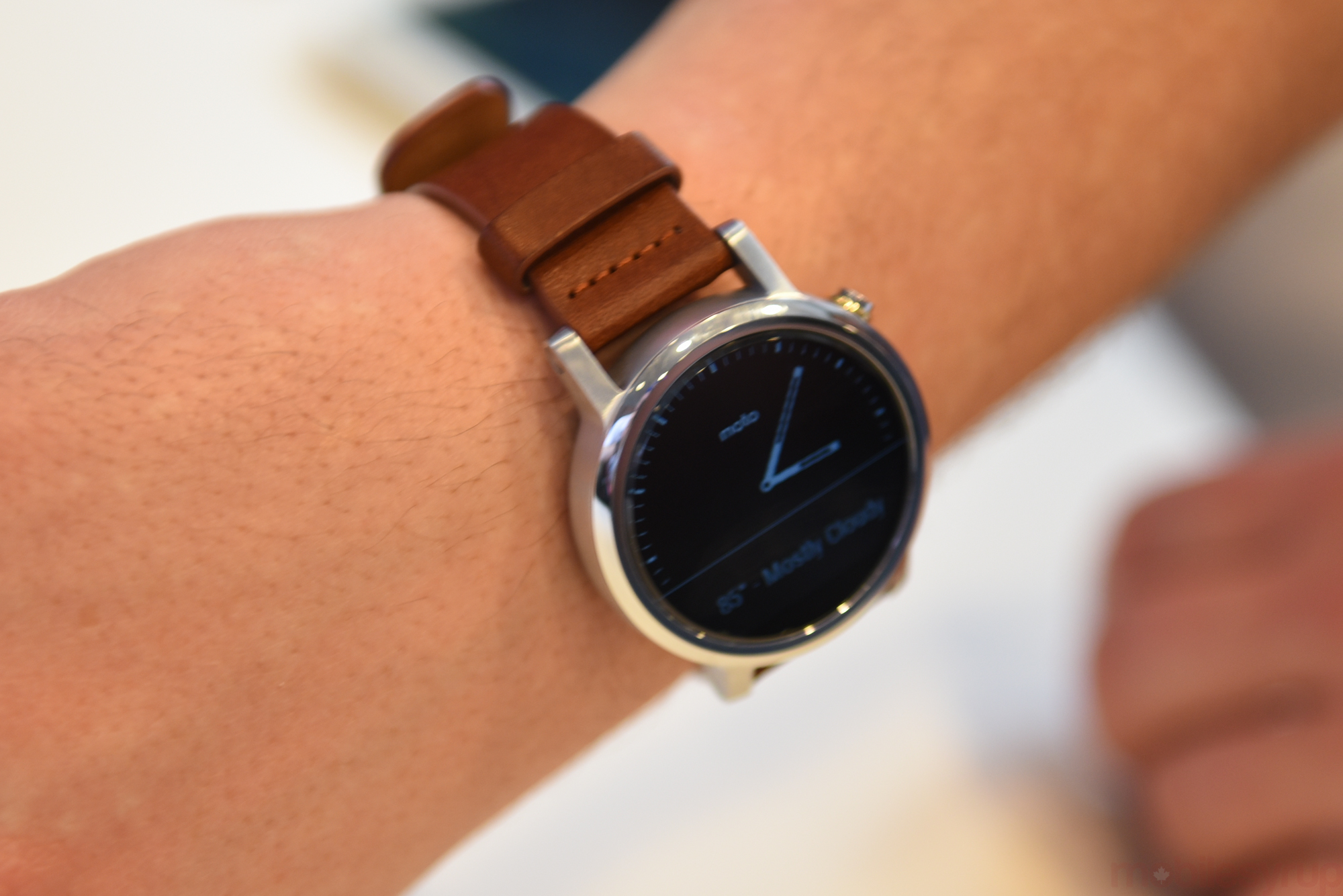 The new Moto 360 is coming to Canada at the end of September for between $379 and $499 depending on size and material. It will be available at Best Buy, Telus, and the Google Play Store.