Game of the Week: Super Arc Light will keep you spinning

Channel 4’s Super Arc Light is one of the most unique mobiles games I’ve played over the course of the last few months.

It’s control scheme has the player in constant motion in order to take down enemies, continuously circling around the periphery of the screen and rapidly shifting back and forth. Rather than individual stages, Super Arc Light takes cues from Super Hexagon and has players instead vying to surpass their own high score arcade style, a plus for those looking for a simple, pick-up-and-play mobile gaming experience.

The game is compelling, repayable and is easy to navigate with just one hand thanks to its simple control scheme that has the player making subtle taps in order to change the direction of their vehicle, which I think is actually a spaceship, and in turn, the projectiles it fires.

Taking out masses of enemies is typically a simple task, but when foes grow small in number, pin-pointing individual attackers becomes significantly more challenging. In most cases when the onslaught of enemies got down to only a few attackers, I’d find myself overshooting my target from both directions. Precise taps are key to success in Super Arc Light.

Power-ups eventually spawn if the player manages to stay alive long enough, giving weapons the ability to deal additional damage and fire multiple shots in one volley, but given the fact that most Super Arc Light sessions only last a few minutes, it’s unlikely most runs will get to the point where these weapons start appearing (sometimes they seem to appear at random though).

Visually, like most mobile games that have made it on MobileSyrup’s Game of the Week list, Super Arc Light adopts a minimalist visual style that consists of only shapes, lines and circles.

While initially a refreshing change of pace visually, after a few hours playing the game, I found myself wanting more from Super Arc Light’s graphics. Staring at basic geometric lines and shapes can only remain entertaining for so long. 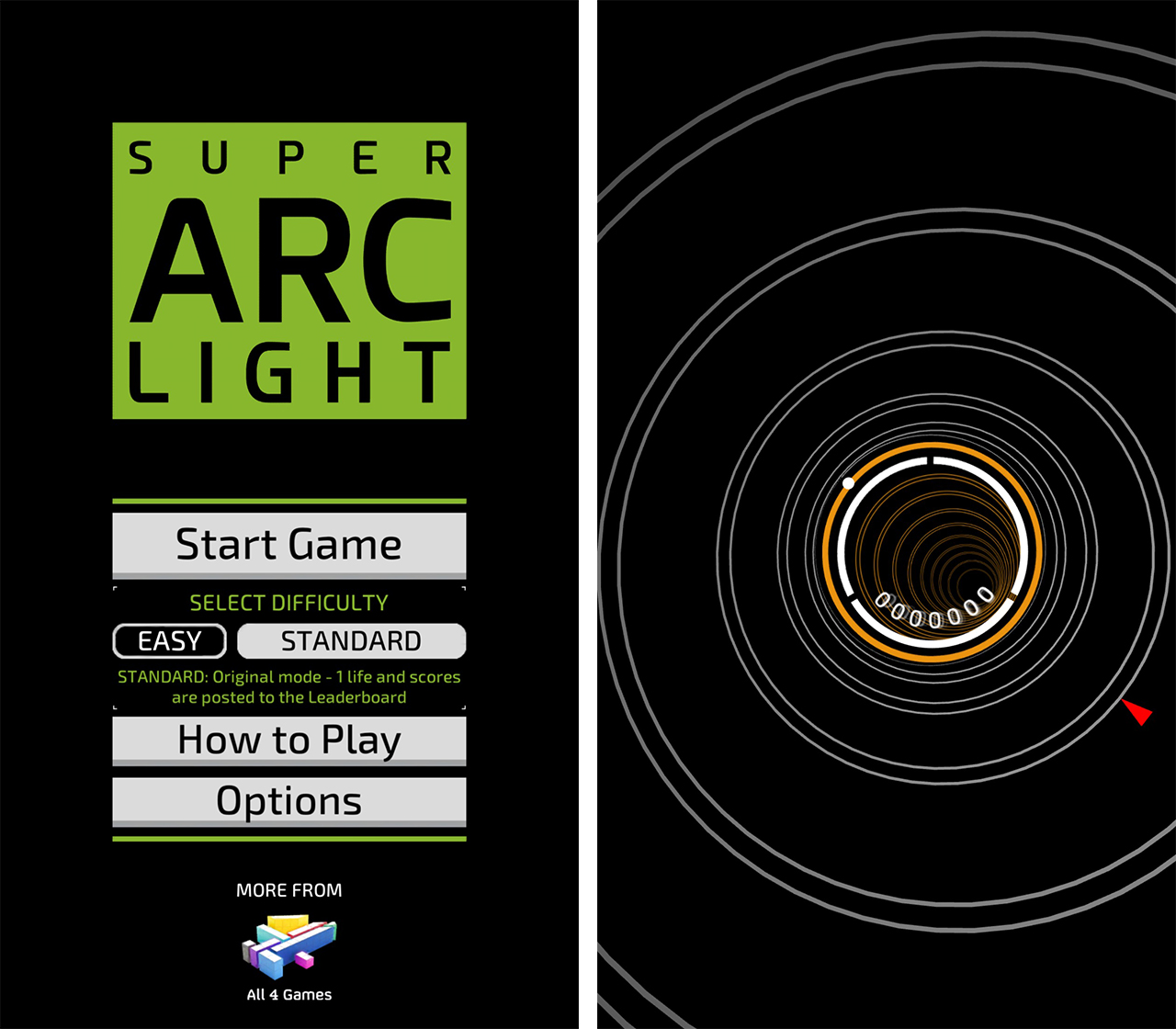 There are some additional downsides to Super Arc Light as well. For instance, sometimes high scores seem to make little sense given it’s unclear how many points each attacker is worth until you die and see your final score.

The same can be said about weapon unlocks. While they generally arrive once the high score hits a certain point, in some cases they appear towards the beginning of the run, leading me to assume they occasionally show up at random.

For just $0.99 though, it’s difficult to beat Super Arc Light when it comes to one-handed, kill-some-time-in-a-line at Tim Horton’s gaming. I’ve moved onto other mobile games over the last few weeks, but always find myself coming back to Super Arc Light. To me, that’s the sign of a great game.