When Microsoft first announced its Surface lineup of 2-in-1 detachables back in 2012, most people were not sure how to greet the company’s new device.

On the one hand, it seemed like the Redmond-based company wanted to displace its manufacturing partners, the same companies that had helped Microsoft dominate the PC market through the nineties and into the early aughts. On the other hand, the original Surface models, particularly the RT variants, weren’t great.

Despite those early missteps, the Surface lineup itself has flourished in recent years, creating a viable new revenue generator for Microsoft. Moreover, with traditional tablet sales at their worst since 2012, companies like Samsung and Huawei, as well as Microsoft’s more traditional hardware partners like Dell, have managed to salvage something from the declining market with their own 2-in-1 efforts.

While not for everyone, there’s been clear demand for devices like the Surface Pro. The issue is, for all its many strengths, the Surface Pro 4 is an expensive device, especially in Canada where our weak dollar doesn’t help its price tag.

Enter Acer with its latest take on the 2-in-1 detachable form factor, the Switch Alpha 12. No stranger to the Windows ecosystem, Acer is also known for producing affordable products. And in many ways, the Switch Alpha 12 delivers on the company’s promise of an affordable but compelling 2-in-1, but it also misses the mark in several important areas.

It’s a device that makes compromises, and it’s up to interested consumers to ask themselves whether they can live by the sacrifices the Switch Alpha 12 asks them to make in the pursuit of affordability. 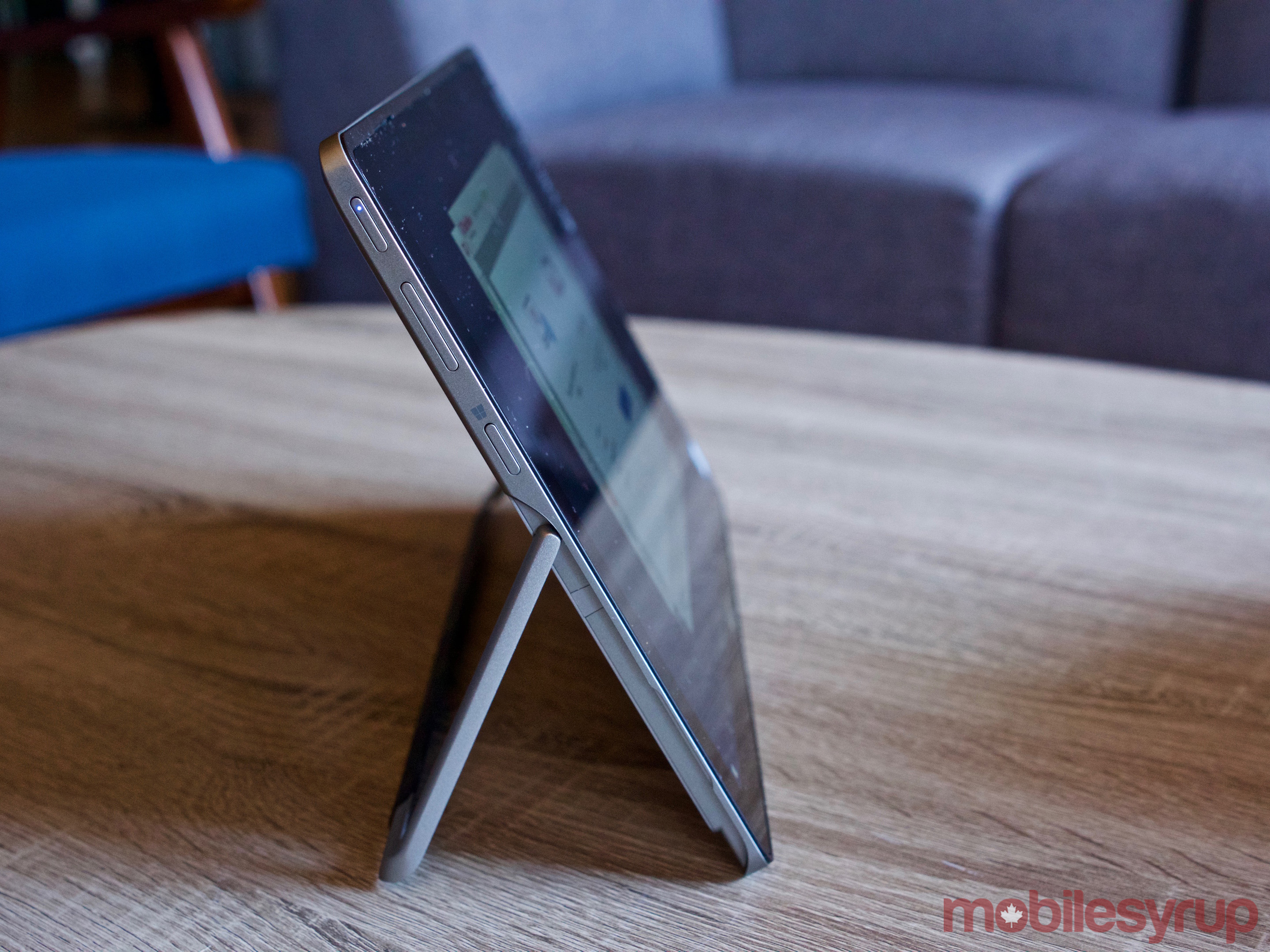 From a design perspective, the Switch Alpha 12 is not a remarkable device. Its visual inspirations are clear from the moment you take it out of the box. First, there is the more obvious of its two antecedents, Microsoft’s Surface Pro lineup. Less obvious, though more relevant in the context of this device, is HP’s recent Elite X2 1012 2-in-1.

Like that device, the Switch Alpha 12 takes advantage of a u-shaped kickstand mechanism to allow for more than one standing configuration. In the case of the Switch Alpha, it’s a functional and sturdy design feature that gives users a significant amount of wiggle room to adjust screen orientation to their liking.

Uninspired design aside, the Switch Alpha still cuts a decent figure. Viewing it from a distance, its brushed aluminum finish gives it a sophisticated look. That impression is somewhat diminished when examining the device close up. That said, with one exception, which I’ll touch upon later, overall build quality is solid, especially for a device at this price point. 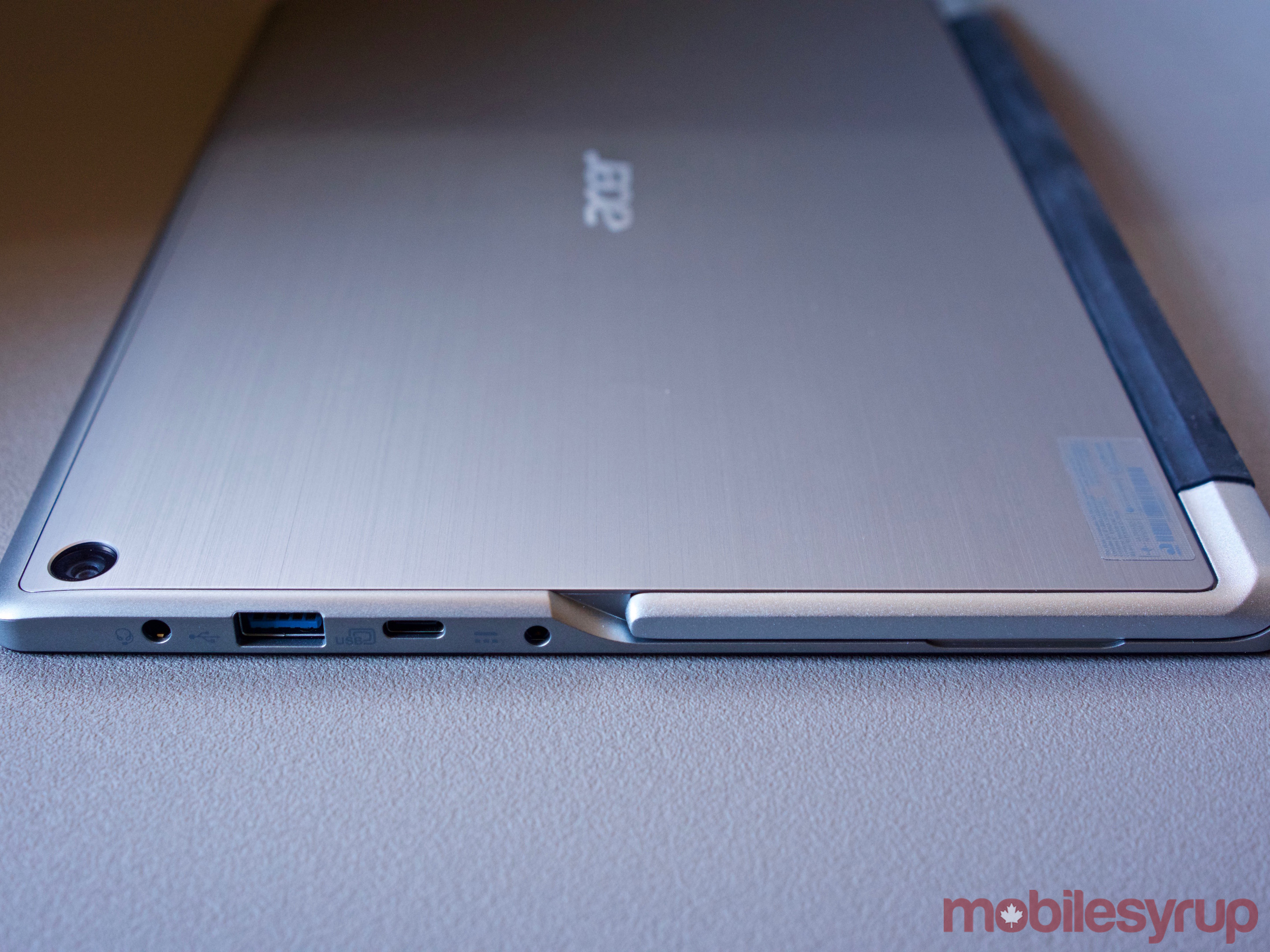 In terms of ports, the Switch Alpha 12 offers a useful mix of I/O options. It includes one USB 3.0 port, one USB-C port and a 3.5mm headphone jack. There’s also a microSD slot hidden behind the kickstand that allows users to add more storage to the device. 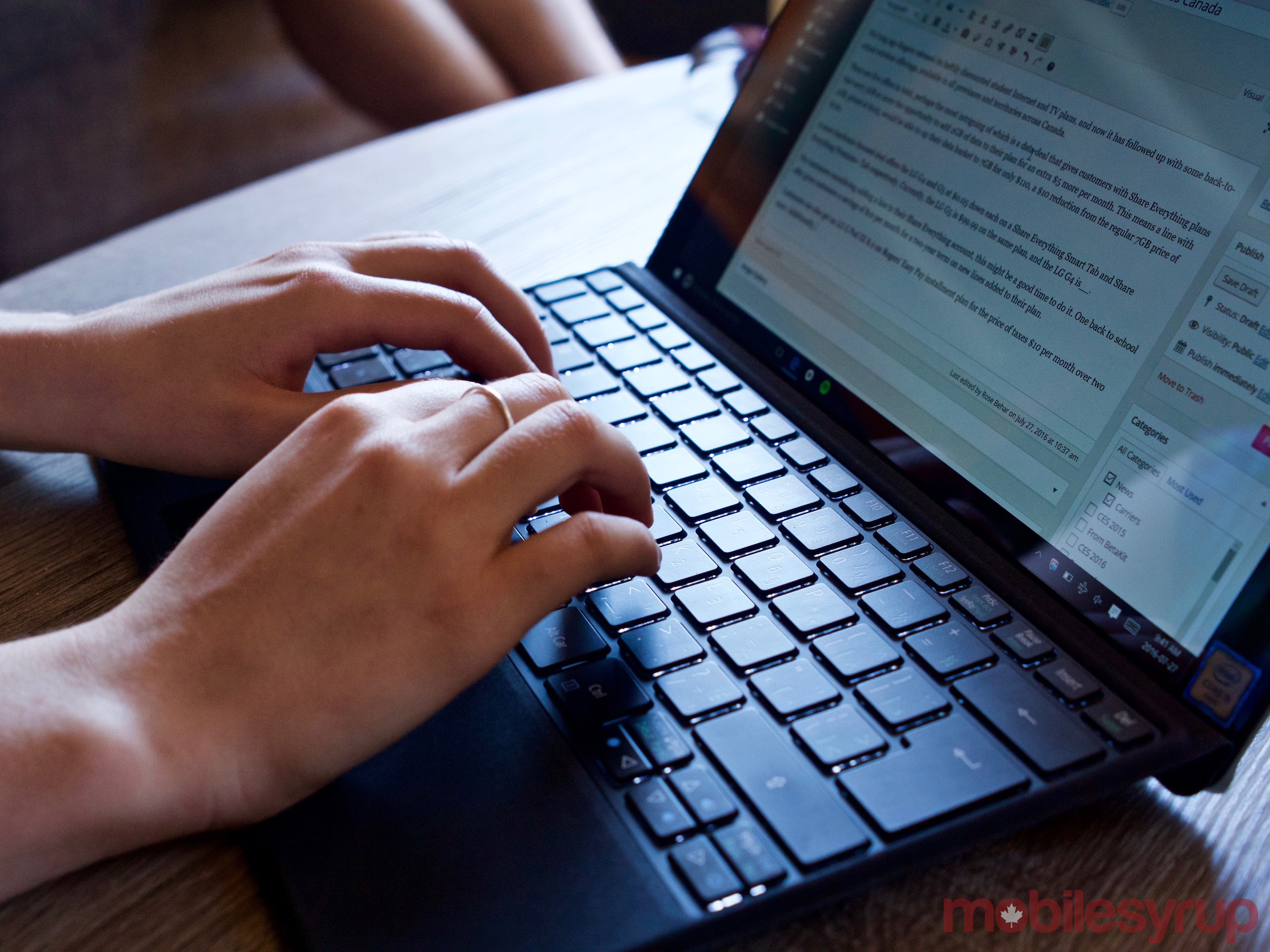 I wrote the majority of this review on the Switch Alpha 12, completing parts of it on a Filco mechanical keyboard I have at home and the Macbook I take with me every day to work. Writing some 2000 words in a short amount of time, the conclusion I came to is that the typing experience on offer here is at least on par with what was available with the Type Cover 3. Key travel and response are both at a level that’s to be expected with a keyboard of this type and cost, but the keys themselves feel mushy. Overall, I was able to write emails, news stories and other content at a fast clip while making few errors, but I didn’t particularly enjoy the experience.

On the other hand, I absolutely did not like the Switch Alpha 12’s trackpad. It has several issues. The first, and most important to my mind, is that it sinks too far into the frame of the keyboard when pressed. It’s also too small and narrow, not providing nearly enough surface area, and I’m not a fan of how it is slightly offset to the left side. 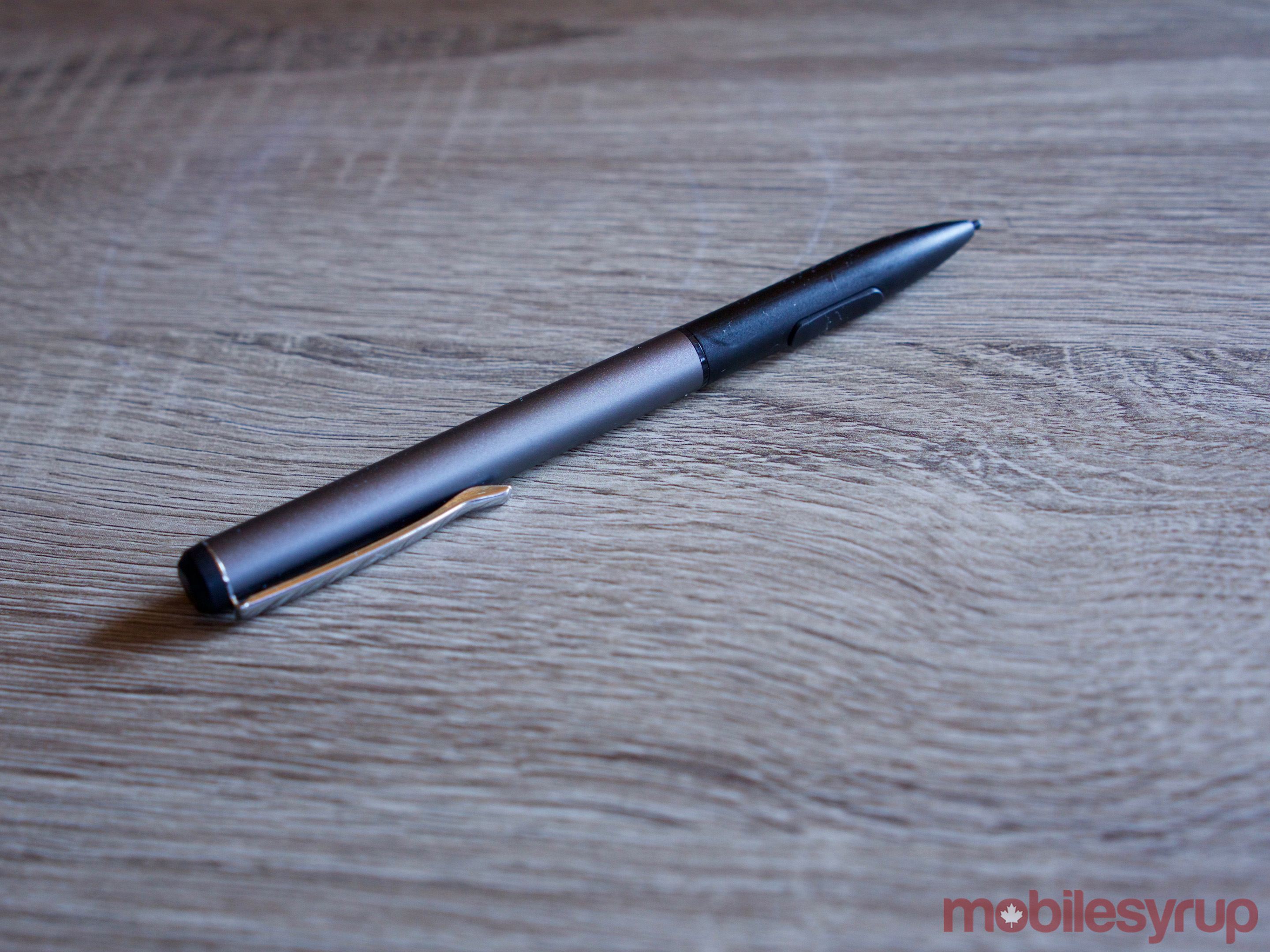 Another issue is the fabric loop designed to hold the Switch Alpha 12’s stylus. I managed to break it on my second day with the device. I’m willing to admit I probably was over zealous when I tried to thread the stylus through that day, but at the same time, it’s easy to see how other people who purchase this device will experience similar issues. The stylus itself serves its purpose well enough. It’s far less sensitive than Microsoft’s offering, and looks a bit too much like a traditional pen in my opinion.

Of course, all of these criticisms need to be weighed against the fact that the Switch Alpha 12’s keyboard cover comes included in the box. The Type Cover 4 is an excellent keyboard, yes, but it also costs $170, adding a significant amount to the price an already expensive device. 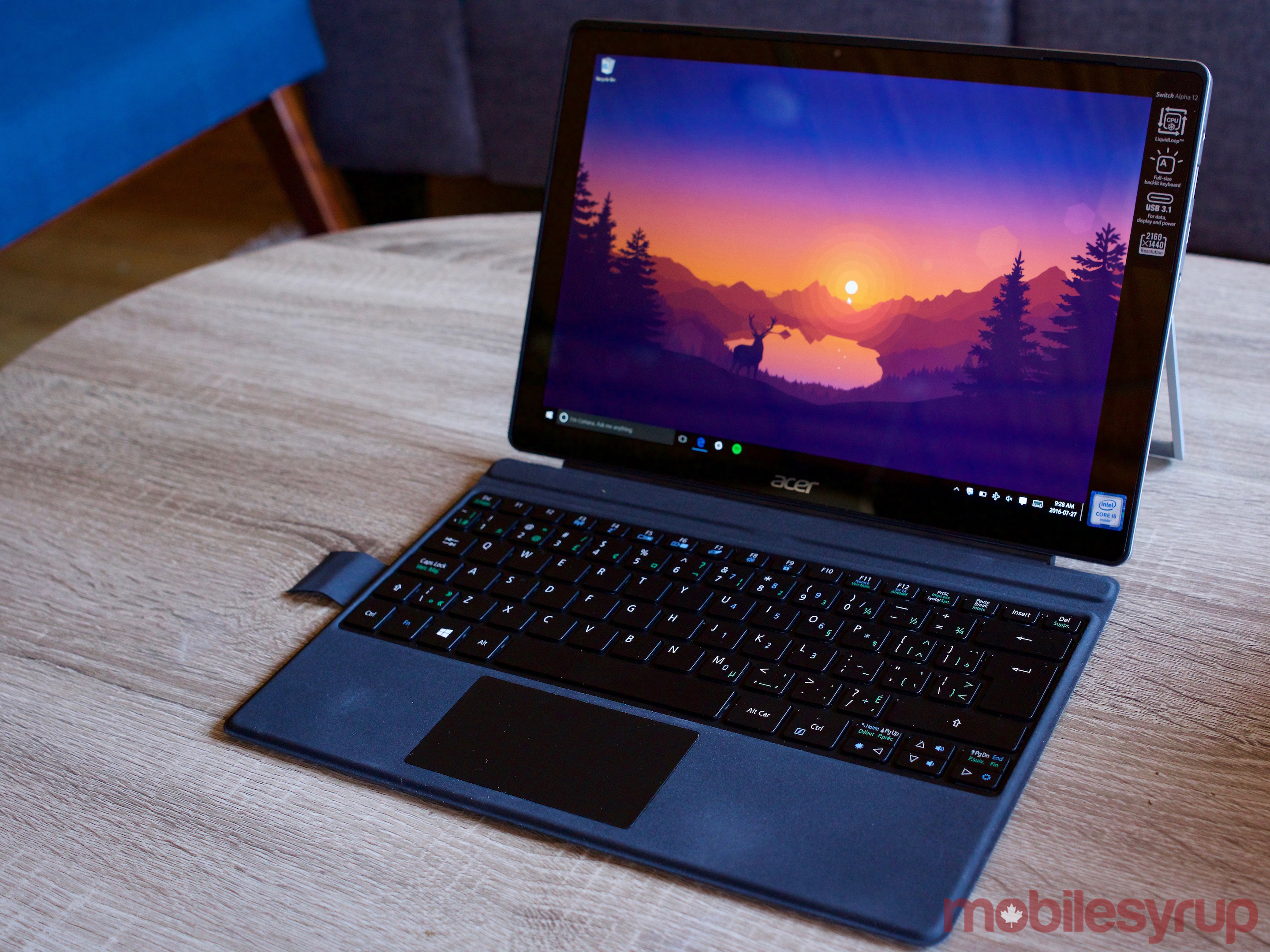 After leaving the Windows ecosystem around the time of Windows Vista, I recently returned to Microsoft’s desktop operating system to find a great user experience. This will be old news to those who have been on Windows 10 since launch, but, if you’re like me, and haven’t used Windows in a long time, it’s definitely time to give Microsoft’s historic operating system another look. Between new features like Windows Hello, a cohesive and pleasant UI across the entire OS, a much-improved notification tray and a fast browser in Microsoft Edge, there’s a lot to like with Windows 10.

Microsoft also needs to be commended for the work it has put into updating its own software. I haven’t had too much time with Windows 10’s anniversary update, but what I have seen so far is promising. With the addition of extension support to Microsoft Edge, I can finally say goodbye to Google Chrome, which has become close to unusable in recent years. Elsewhere, the addition of Windows Ink, Windows 10’s new hub for all things stylus-related, helped show me why some people swear by their computer’s pen input. 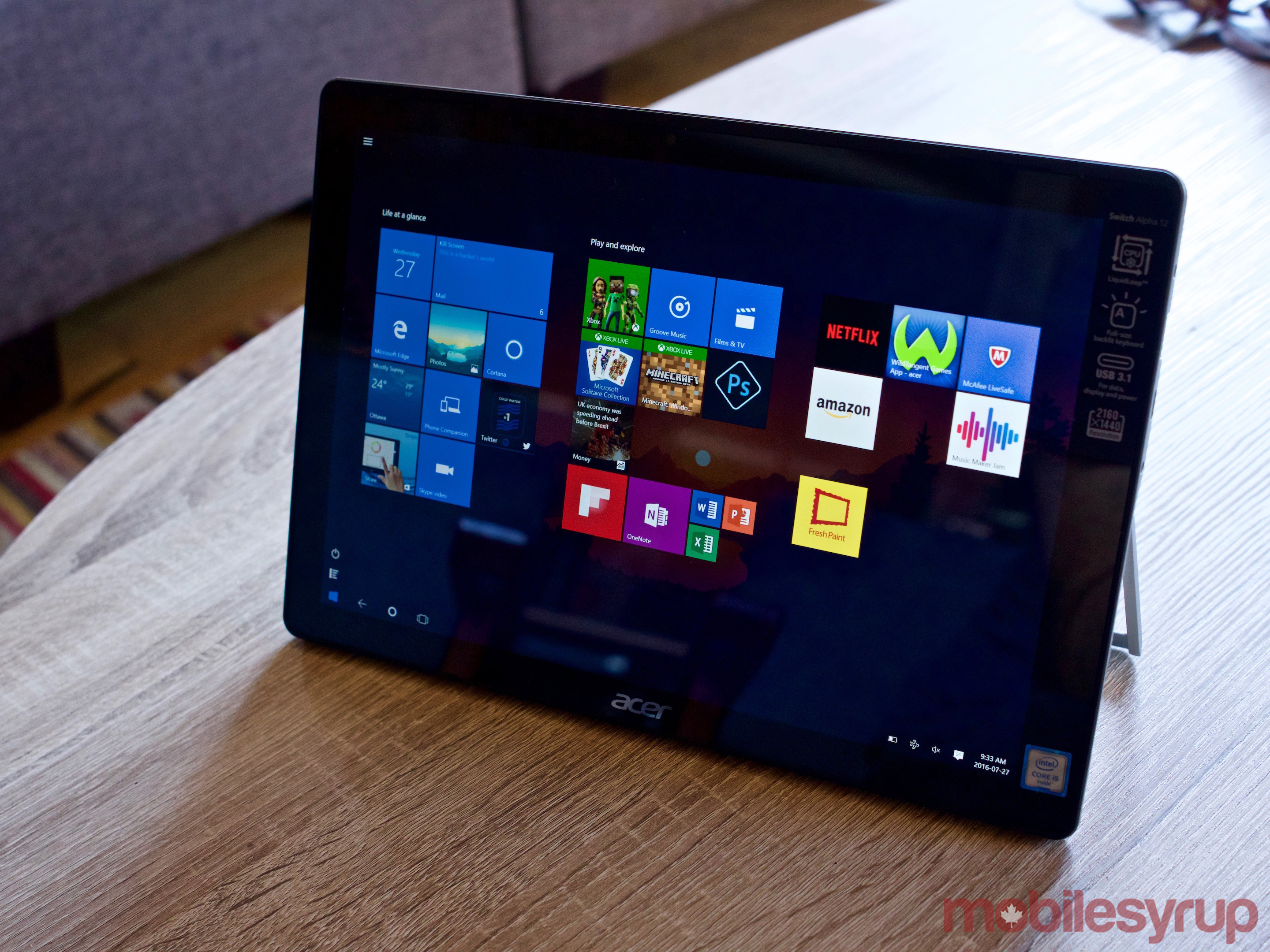 In terms of included software, the Switch Alpha 12 comes with its fair share of bloatware. Besides the company’s own utilities, the unit the Acer provided to MobileSyrup came with a number of third-party apps pre-installed, including Twitter, Flipboard, Netflix and Candy Crush Saga, as well as Amazon’s store and Kindle apps.

With its constant notifications, however, McAfee LiveSafe was the worst offender. 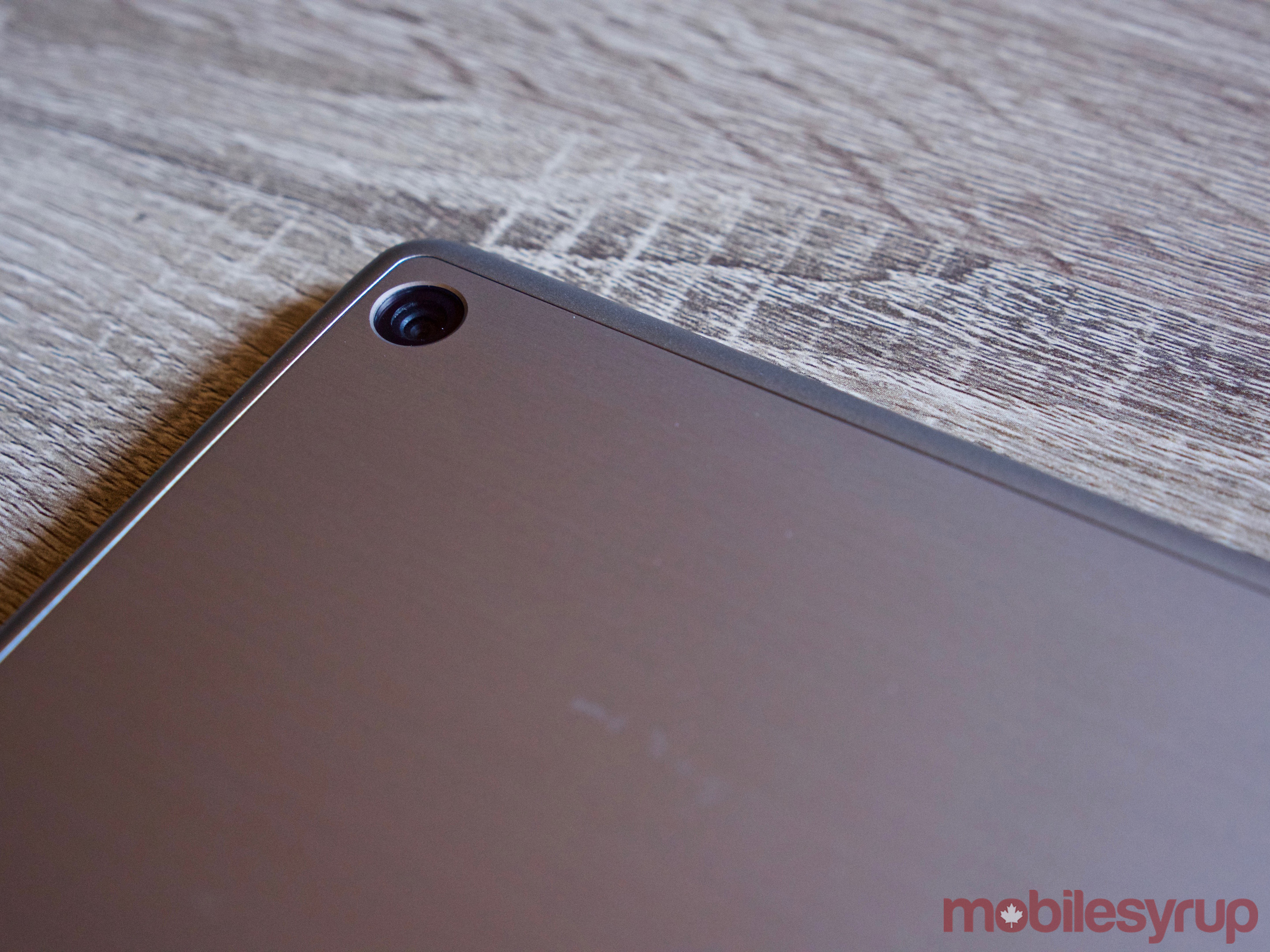 In terms of configuration, the unit MobileSyrup was provided came with a 2.3GHz Intel Core i5 processor, 8GB of RAM and 256GB solid state drive. During general computing tasks, the Switch Alpha 12 was fast and responsive, handling multiple apps at once without any issue. Those looking to game with their laptop best look elsewhere; with an integrated graphics card from Intel inside, the Switch Alpha 12 can’t run modern games like Overwatch and The Witcher 3 at a playable level, though it can handle less intensive games like Hearthstone with ease.

Each and every configuration of the Switch Alpha 12 comes with a 12-inch 2160 x 1440 pixel IPS touchscreen display. It uses the same 3:2 aspect ratio as Microsoft’s own detachable, though doesn’t pack in as many pixels. Besides the thick bezel, the screen is excellent. It’s a bit on the warm side, as you can see in the two above images, but it’s sharp and touch response is excellent.

The Switch Alpha 12 is the first 2-in-1 device to feature a liquid cooling solution. In practice, the benefit of this setup is that Acer’s new 2-in-1 is completely silent, even when running demanding applications. Moreover, because it doesn’t make use of a radiator of any fans to dissipate excess heat, the Switch Alpha 12 is sealed from the outside world, saving it from dust and other particles that could in the future get into its internals. However, I’m unsure whether the Switch Alpha 12 makes a compelling case for this type cooling solution within the context of an ultraportable. 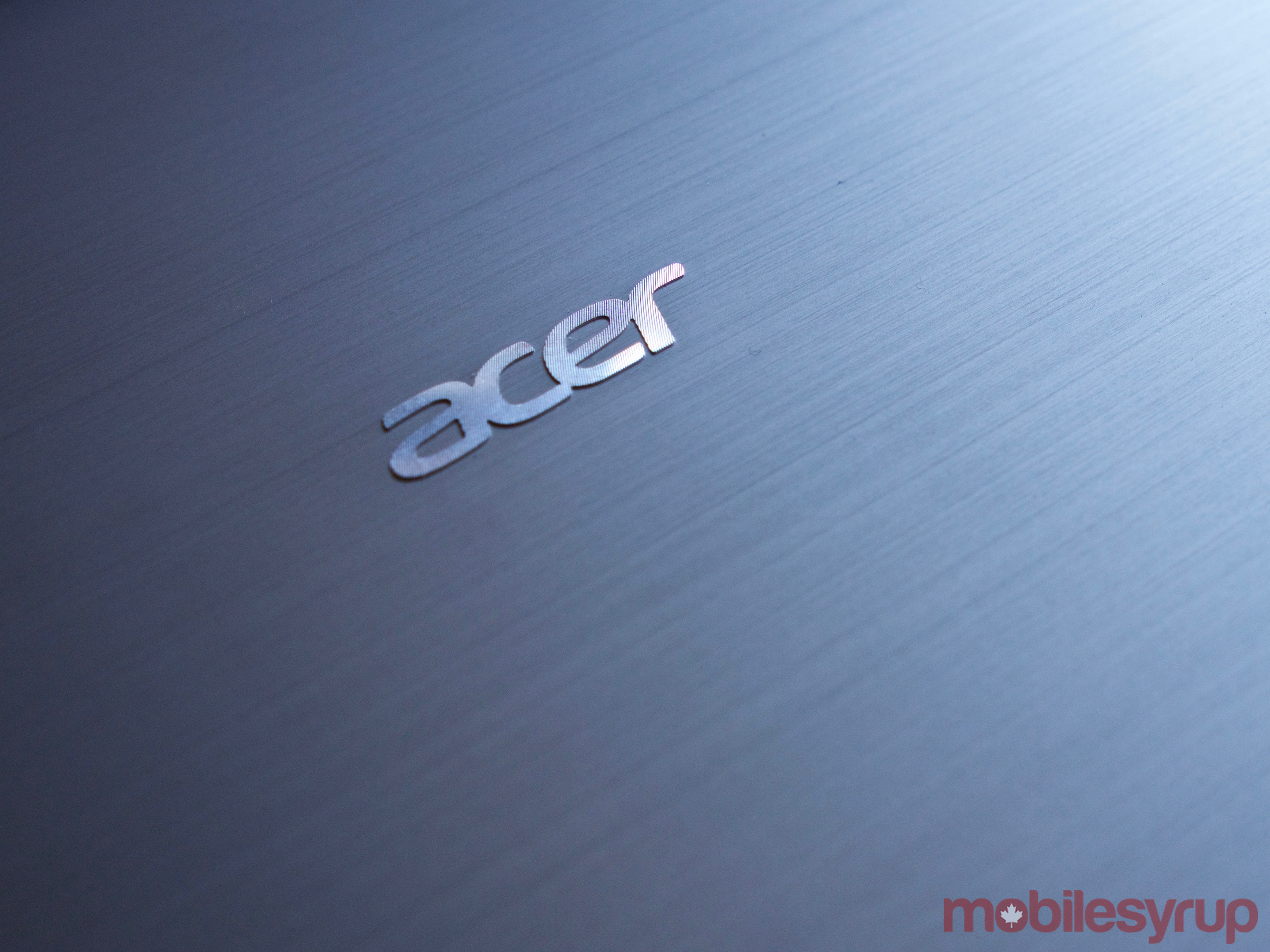 Without having the time to use this computer for a number of months, it’s hard to tell how this setup will work two and three years into the future. Even in just normal use, the right side of the Switch Alpha 12 becomes warm to the touch. It’s a good thing its internals are located behind the screen, because if they were beneath the keyboard, like in a traditional laptop, it would not be comfortable a device to place on one’s lap.

Battery life is also unimpressive. During a normal work day — using Microsoft Edge with multiple tabs open, Slack and Spotify — I found the Switch Alpha’s 4870 mAh battery lasted between four and five hours. The worst thing I can say about this device is that it probably wouldn’t get through a large press event on a single charge, which makes it a non-starter in my case. For everyone else, it’s best to think of this device as a powerful desktop that can go portable for a few hours when needed.

On its own, the Switch Alpha 12 is, save for its less than stellar keyboard and poor battery life, a good device.

And if all you care about is performance, then it’s an easy computer to recommend. Going with the Switch Alpha 12, consumers can get a modern, well-specced device for less money than the competition. The Core i5, 8GB RAM, 256 ROM variant, for example, costs $1000 in Canada; a similarly specced Surface Pro costs $1,679 — without even factoring in the additional cost of a Type Cover 4 keyboard.

Where things become more complicated is in the difference between input devices. We spend so much of our time on these devices interacting with the included keyboard and trackpad. So much so that I don’t think it’s unreasonable, depending on a person’s budget, to purchase a lower specced machine if it means coming away with a computer that has a better keyboard and trackpad. While it would be hard for me to get a new computer with less than 8GB of RAM, depending on your computing needs, a Surface Pro model with 4GB of RAM and a Core M3 processor may be enough, especially if all do with your computer is surf the web, send emails and watch YouTube.

What’s perhaps most frustrating about the Switch Alpha 12 is that it’s so close to be an ideal device. Had it shipped with a better keyboard and trackpad, as well as a more capable battery, it would be the go-to affordable 2-in-1.

Before anyone asks, here’s the wallpaper you see on my desktop.