BMW presented its new Performance X7 concept car in Toronto, showcasing some potential technology and mobile integration it may be working on.

Being a concept car, the Performance X7 is an SUV that will eventually hit the market — probably in 2018 or 2019 — but with a question mark over what technologies it will ultimately include.

Much of the look and feel has been focused on the styling inside and out. Three rows of seating, panoramic sunroof, leather interior, polished aluminum and laser lights. The 23-inch light-alloy wheels are also the sort of thing car gearheads drool over. The grille looks better. The clean lines and slick colour standing out for their simplicity. No question, it’s a nice-looking ride.

Between the lines, however, is a tech story that BMW is being coy about. 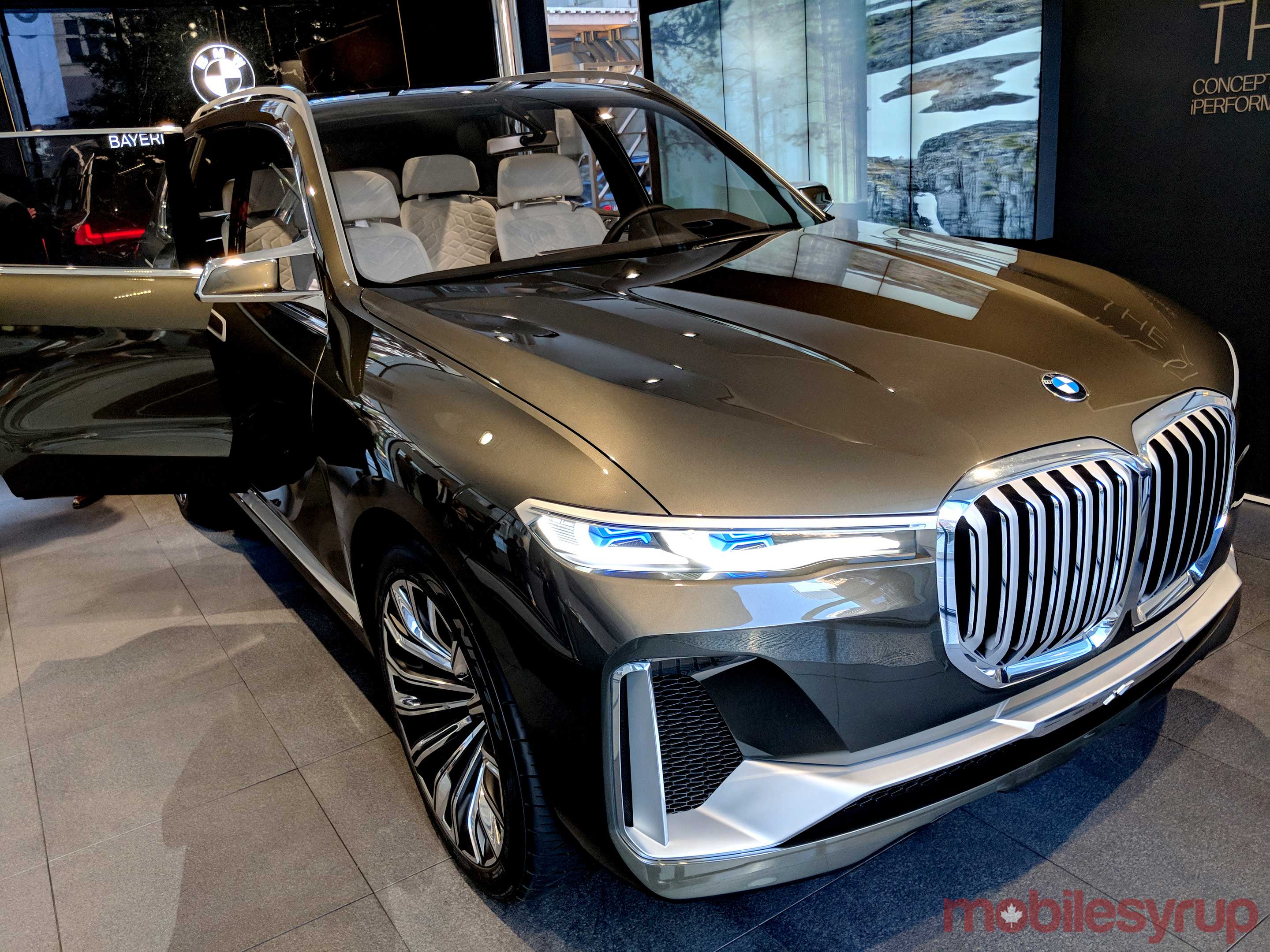 Generally, luxury vehicles like this portend what is to come to other vehicles from the same automaker later on. Since this is a concept car that hasn’t been finalized, BMW isn’t commenting on the full breadth of features the car is likely to have.

Autonomous or remote parking would seem to be a given since it’s already in the 5 series and spreading out. An autonomous driving mode of some kind would also make sense, albeit nothing revealed on that front.

While the pavilion showed off the Concept X7, it raised more questions than it answered. The main purpose was to focus on the overall design, which was subjectively attractive to me, but I was more curious about the other futuristic elements.

I wasn’t allowed to sit inside (no one was), so had to maneuver around, essentially without touching anything, to get more than a glimpse of what the vehicle had. A 12.3-inch all-digital cluster in front of the steering wheel could be toggled to display a map or other contextual information. That display complemented the regular 12.3-inch infotainment system screen that would run the latest version of iDrive. 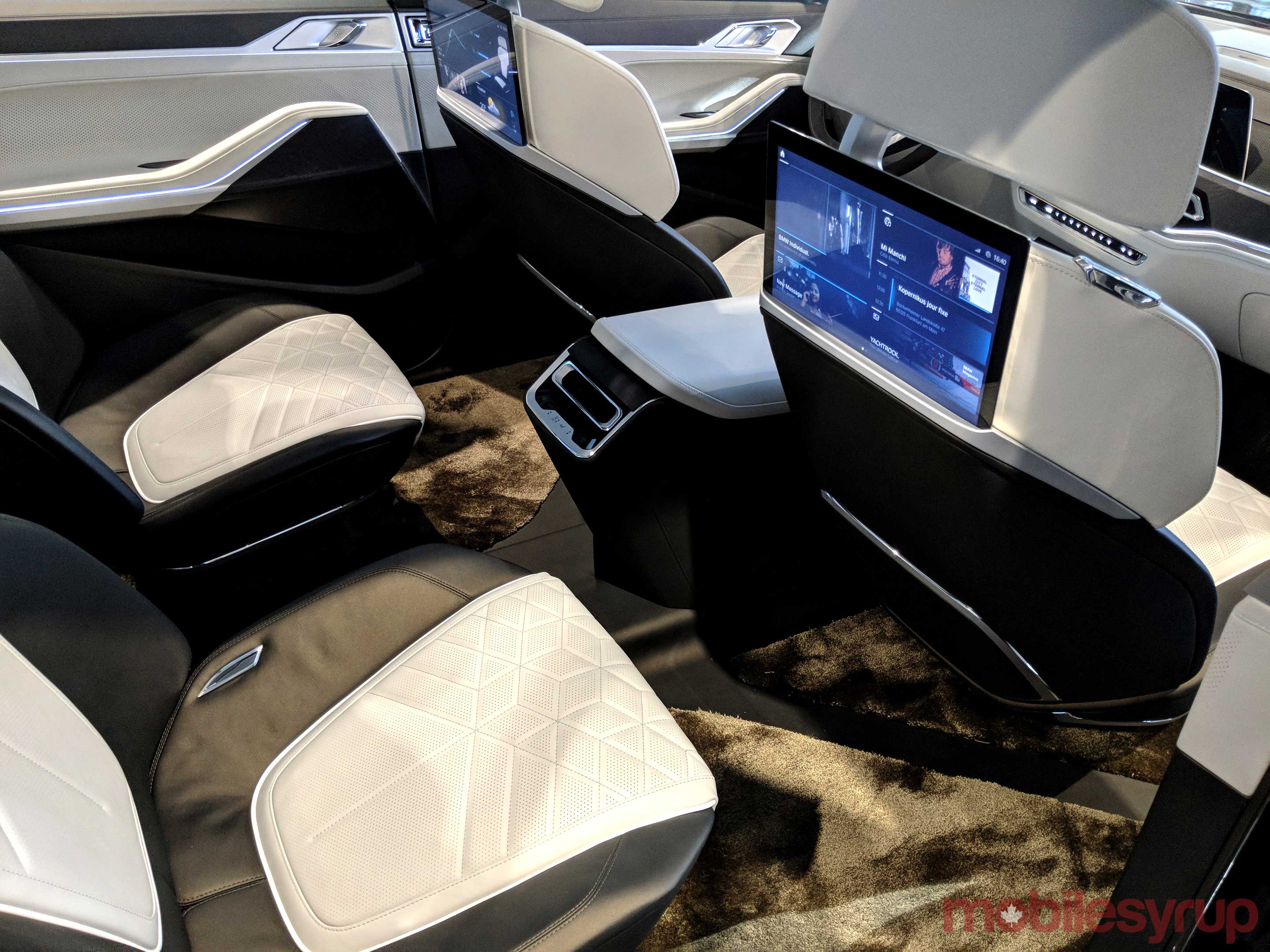 With two 12-inch tablets in the rear nestled behind the driver and passenger seats, the Concept X7 eschews the standard (and thicker) dummy displays BMW always used before. These are fully interactive tablets, with touch capability and interconnectivity enabling them to share content and information with each other.

It’s an extension of what BMW previously did with the 7 Series, where a Samsung Tab 7.0 was docked in the back centre console. That tablet ran BMW software allowing the back seat passenger to control what music was playing, start a massage in the seat and access navigation maps.

This setup would take that further. Instead of having a small tablet docked in the centre with two dummy screens on the seats, the two tablets, in this case, would combine them. Each tablet functions independently, or in cohesion with the iDrive system in the front.

For example, if one passenger was viewing a video on one side, swiping it onscreen toward the other person would push the content there too. This would apparently apply to anything on the display and can go in any direction.

Change the music by swiping it up towards the front so that it plays on the car stereo. Swipe it toward the other back seat passenger so they can listen to it through Bluetooth headphones connected to that specific tablet. Find a restaurant to go to on the map, and swipe it up toward the front to start turn-by-turn directions on the factory navigation.

It’s one of the more seamless integrations I’ve seen, and if it works even better when the production X7 comes to market, BMW would need to roll it out to its other vehicles too. Theoretically, it should be possible to enable such a feature on passengers’ phones and tablets connected to the system, so that they can swipe over content to the system too. 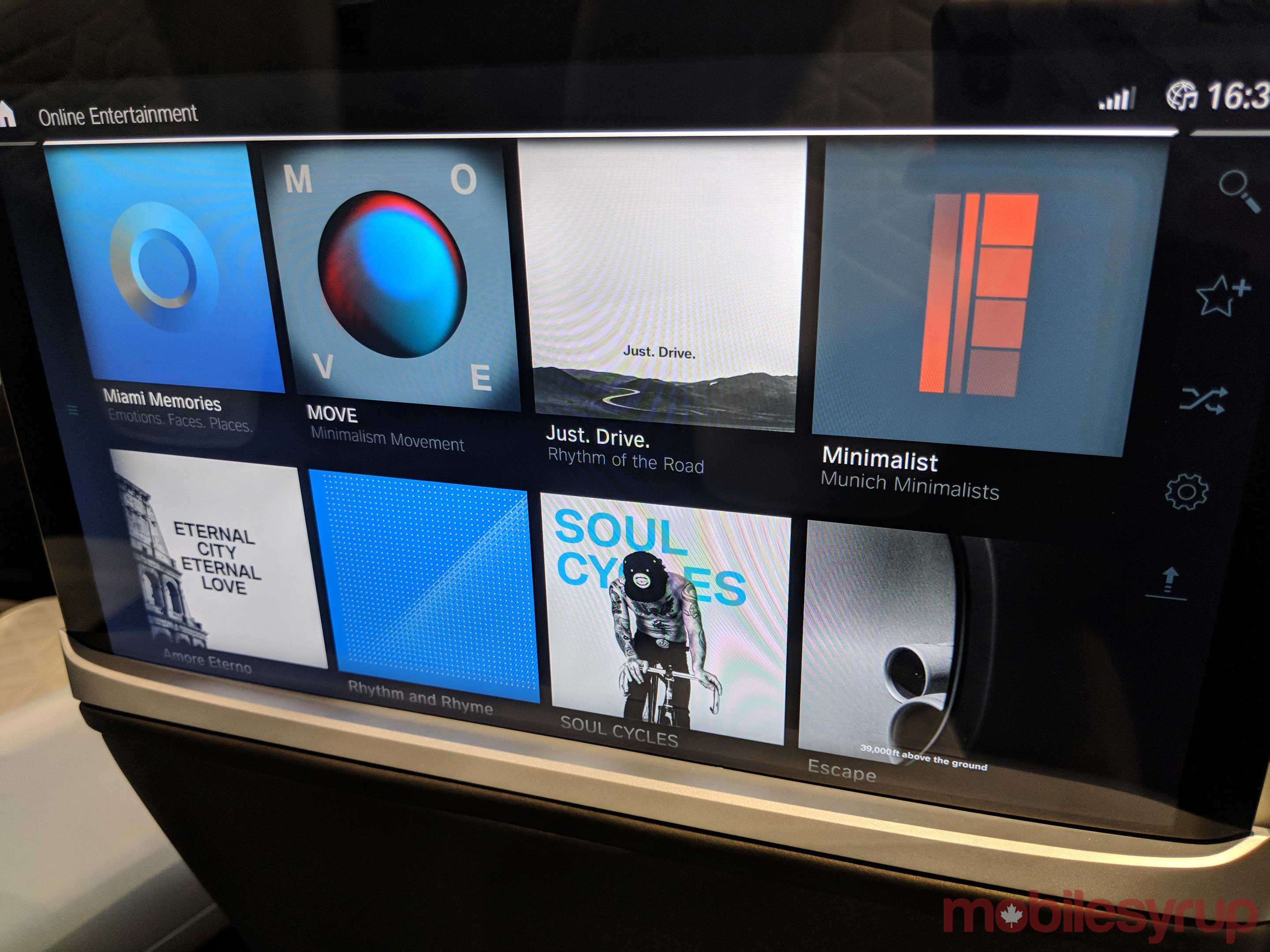 I looked for ports and connections and found very little. Not surprising, perhaps, since this is not a production model, though no less curious for something designed to be futuristic. An HDMI port would make things interesting because of the functionality it would support.

This was largely successful in a luxury vehicle like the Cadillac CT6, where viewing Netflix, NHL Live or NFL Game Pass (via DAZN) would be easy to pull off. If there’s a wireless ad hoc technology, like Wi-Fi Direct, at work to enable the gesture controls, no one seemed to know for sure. It’s not even clear what ports would make the final build.

The two rear tablets have better screens than the older ones do, including better resolution and contrast ratio. Whether they will be removable from their docks is unclear. If they will be modular and eligible for replacement by newer designs years later is also unknown.

If they are effectively Android tablets running BMW’s overlay isn’t being revealed. The Samsung tablet in the 7 Series was a fully functional tablet that could download apps, play games and do anything a device like that could do. We won’t know if that’s the case here until the production model is unveiled. 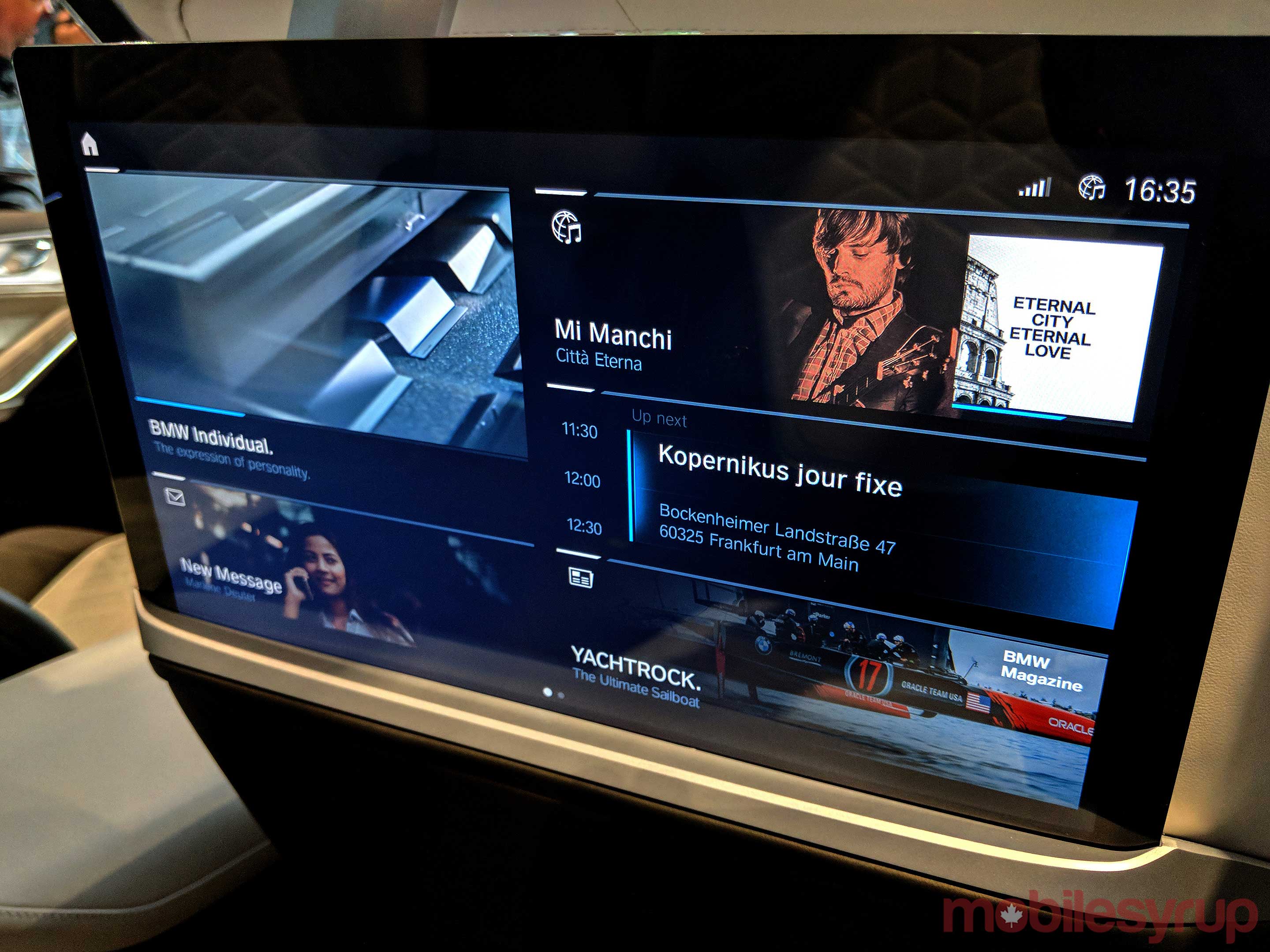 I think it’s all but a foregone conclusion that Amazon’s Alexa will be integrated into future BMW vehicles, and that will certainly include this one. Nothing was confirmed, but this integration has been noted before, most recently at CES in Las Vegas in January.

Having Alexa in the car would dive deeper into the services drivers and passengers use. BMW’s Spotify integration has always been good, except Alexa can make every track searchable by voice.

In contrast, Google and Apple’s involvement is murky. BMW won’t support Android Auto because the platform doesn’t adhere to the automaker’s privacy policies. Google Assistant doesn’t work, either. Siri Eyes Free works fine, though only Apple can fully unleash its digital assistant to do more than the basics.

Nothing about the vehicle under the hood was mentioned in the showcase because it could change. It’s cryptic, but that lack of transparency adds mystery to how drivers may be able to drive it. BMW is working on autonomous driving technology, offering limited self-driving on highways with the 5 Series.

The plan is to have a Level 3 autonomous driving vehicle by 2021. It won’t be the X7, but there’s no reason to believe it won’t have Level 2 capabilities by the time it rolls off the assembly line.

Whatever tech it deploys will also steadily appear on other vehicles in the BMW fold.