Once you accept Amazon’s ecosystem requirements, this is a more than capable tablet at a great price

Having used the Amazon Fire HD 8 for the past few months, I’m forced to admit that most of my opinions on it can be summarized quite succinctly. This is a great tablet for media consumption, but it’s not really great for very much else.

While most users will be satisfied with consuming YouTube and Netflix, reading titles on Comixology, browsing Facebook and Reddit, and playing the occasional round of Hearthstone and some Monument Valley, power users looking for a laptop replacement will not find much solace here.

Additionally, while Amazon’s tablet runs an operating system based on Android 5.1, Fire OS totally eschews the Google Play Store in favour of the Amazon Appstore. All of which is to say that this device runs a fork of Android and it’s quite clearly an Amazon branded tablet — not a Google or an Android one. 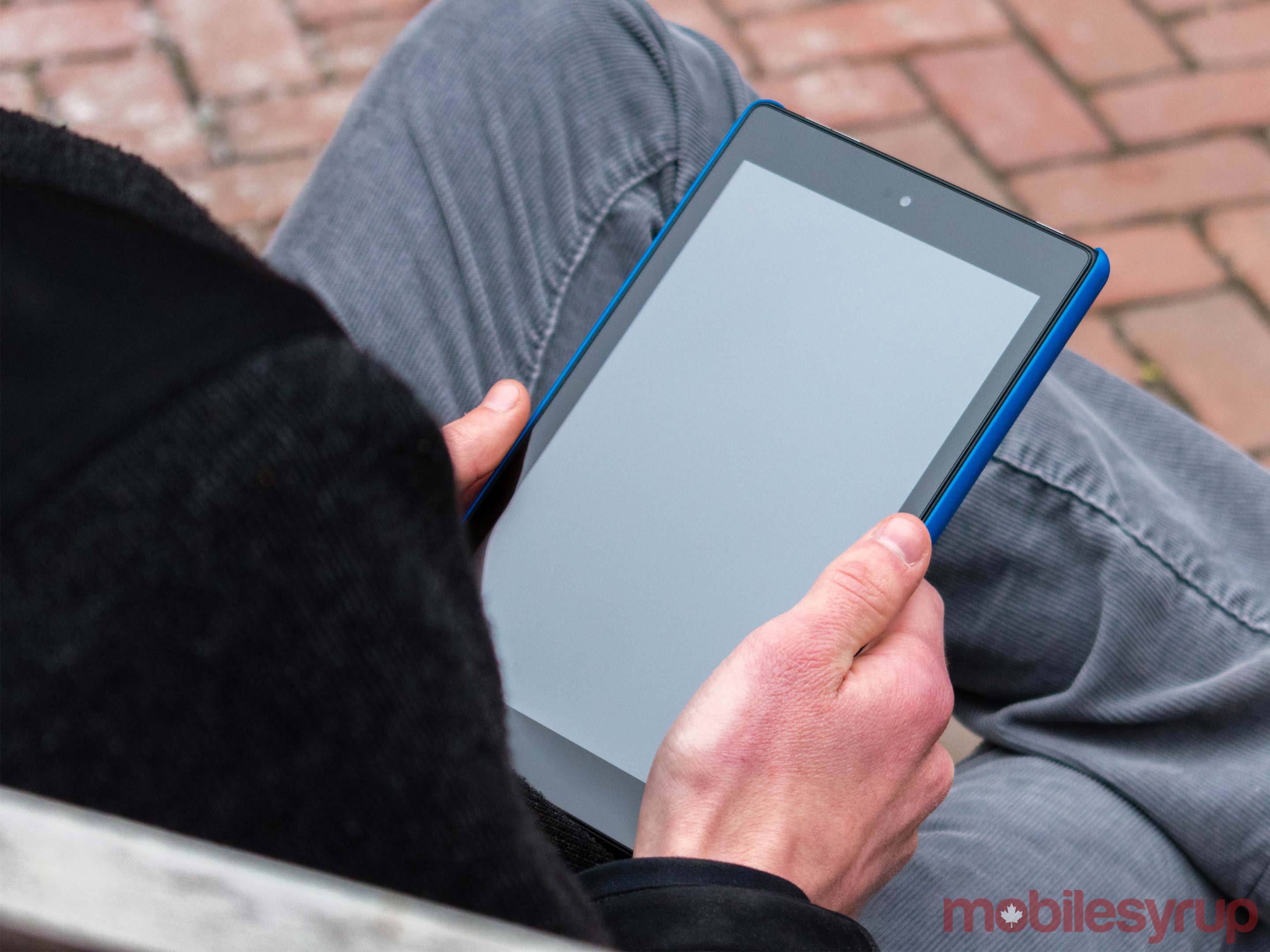 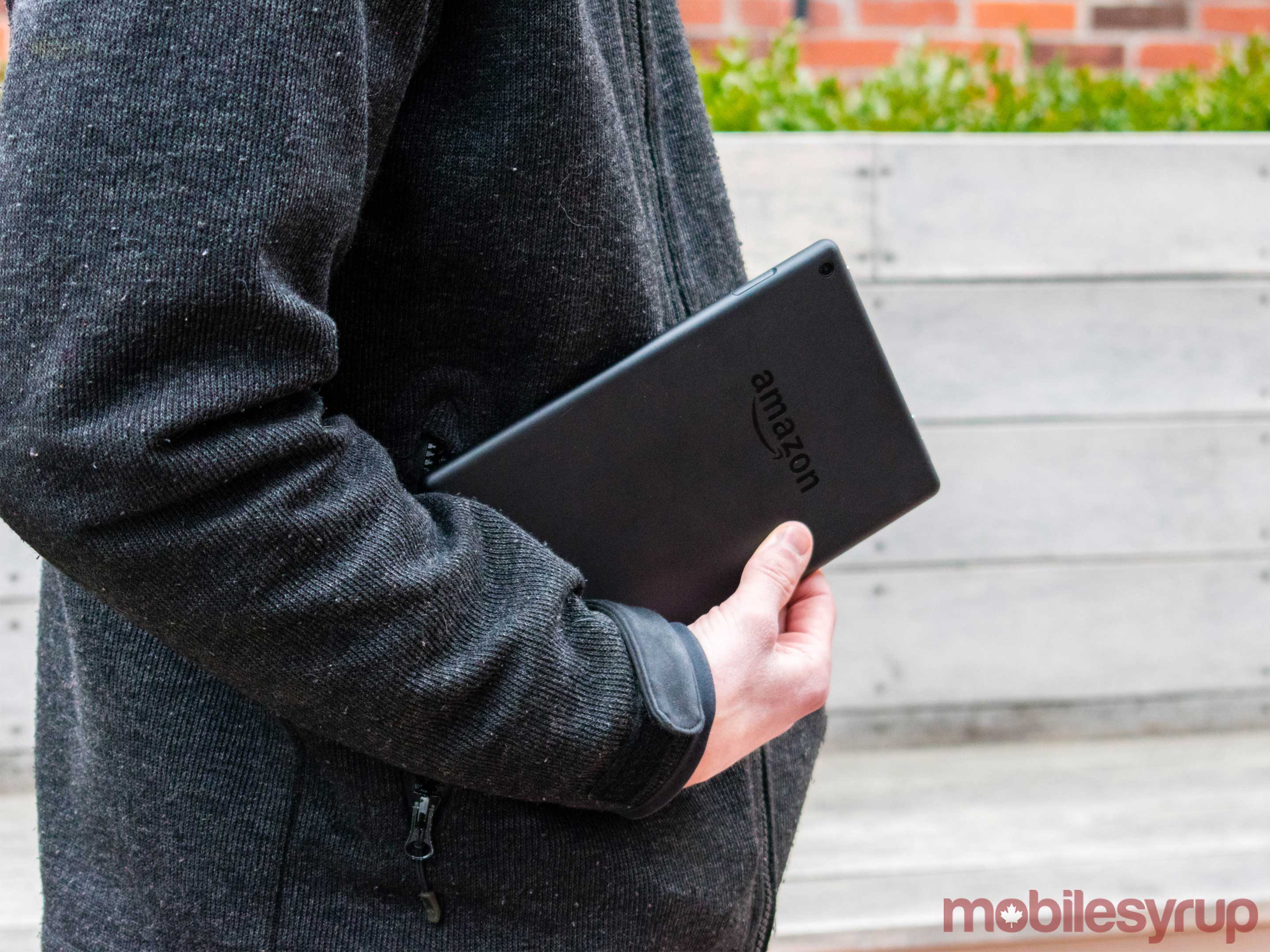 Amazon’s Fire HD 8 is the pure definition of unassuming. The tablet itself is a sleek, black rectangle, with a power button and volume rocker along the width of the device, as well as two speaker grills located along the length of the tablet. These speakers get pretty loud, and are more than sufficient for headphones-free video and audio streaming.

The rear-facing camera is a 2-megapixel shooter, while the front-facing selfie shooter is a VGA. The cameras are also nothing of note. The tablet takes poor indoor and outdoor photos, is weak in both low-light and bright conditions, produces passable images whether its sunny or cloudy, and is certainly not going to win any awards. In short, this isn’t the tablet to take on a photo-friendly family vacation.

However, the device’s battery does make it great for long trips. Amazon says the device can last for approximately 12 hours of reading, web surfing, video and music streaming, and that number is more or less consistent with what I’ve seen in my time with the device. The Fire HD 8 is also a standby beast, able to last at least three weeks on a single charge. 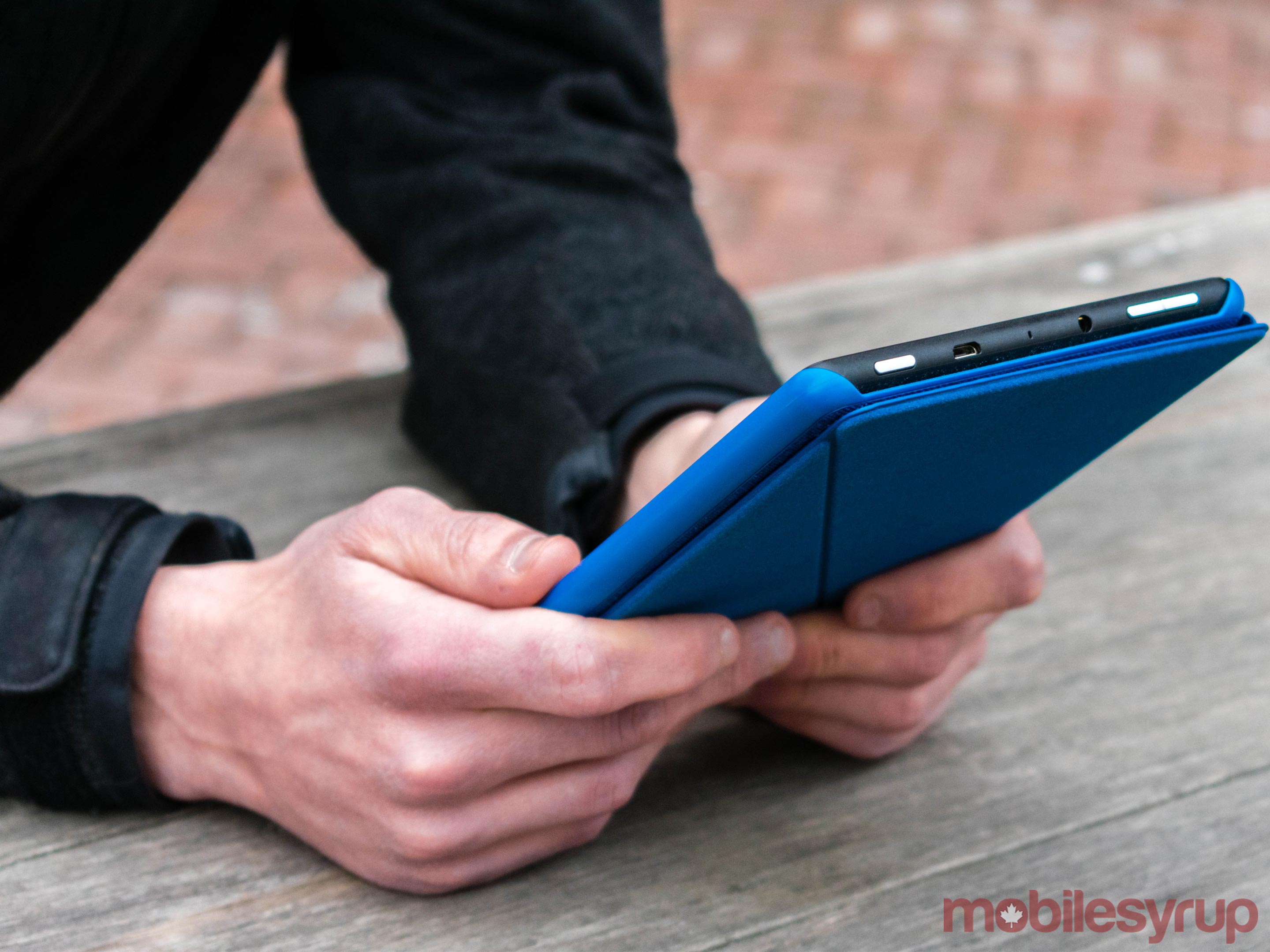 Be warned, the device is charged using a micro-USB port — there’s no USB-C or QuickCharge here. Additionally, it takes about six hours to charge the device from empty to 100 percent. It also doesn’t get hot if used while charging.

The Fire HD 8’s display is perhaps its weakest point. In fact, outdoor-use — especially in sunny conditions — is almost impossible. Display visibility is actually so bad that the only way I was able to take photos of the display was by snapping photos indoors. Once inside, the display becomes serviceable. It won’t bring out the blackest of blacks or allow viewers to watch 4K content, but it’s great for Netflix and YouTube.

The device also comes in a 32GB variant, with the same processor, screen, battery and camera, but costs a slightly more expensive $129.99 CAD. 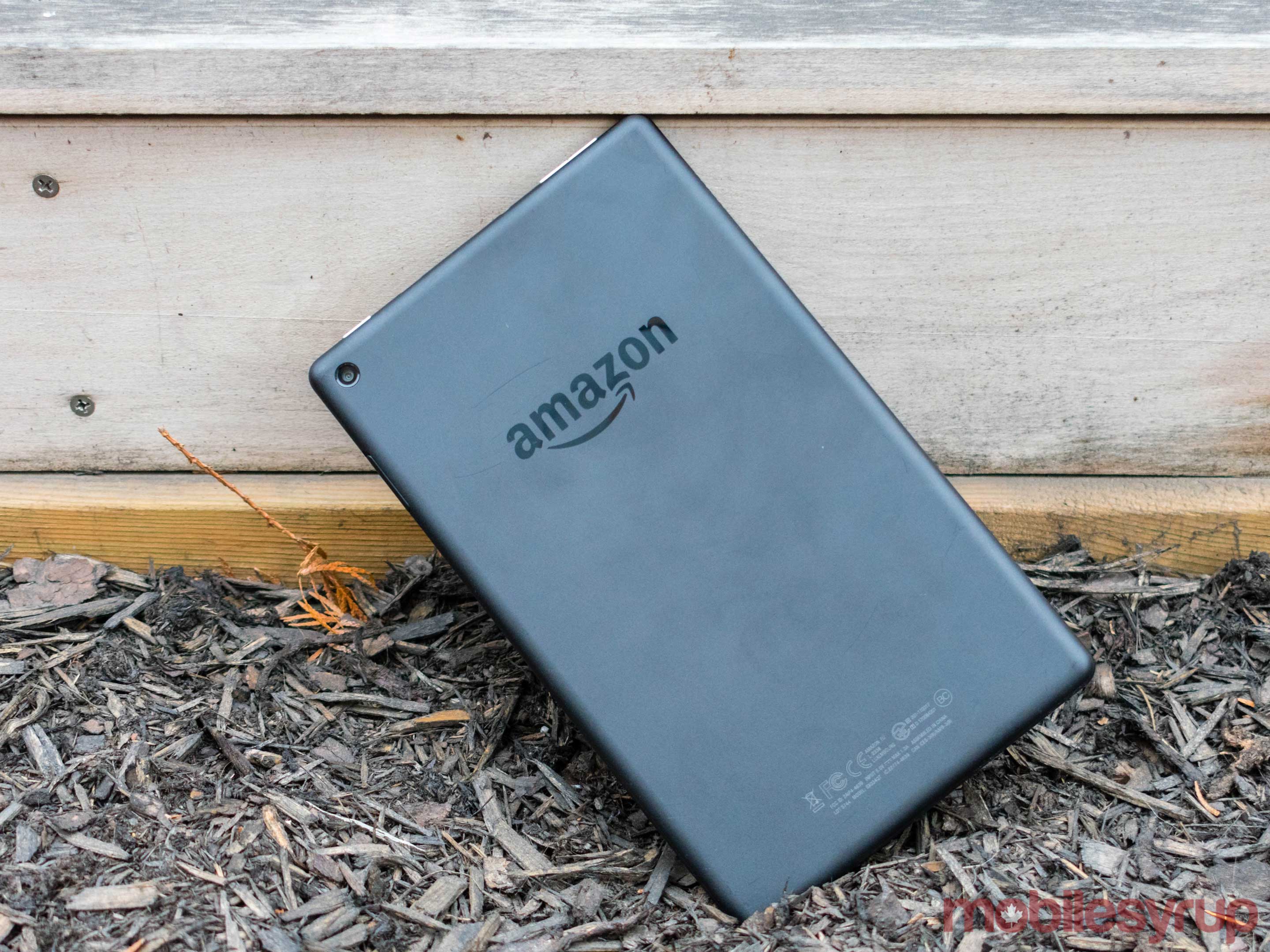 I tested the 16GB variant, and while I didn’t have to worry about running out of storage space, I would still recommend purchasing the 32GB version. The Fire HD 8 can be outfitted with up to 256GB of microSD card storage, but the comfort of an additional 16GB of onboard storage always helps alleviate concerns.

The marine blue case is pictured in this review.

Floating away from pure Android down the Amazon river 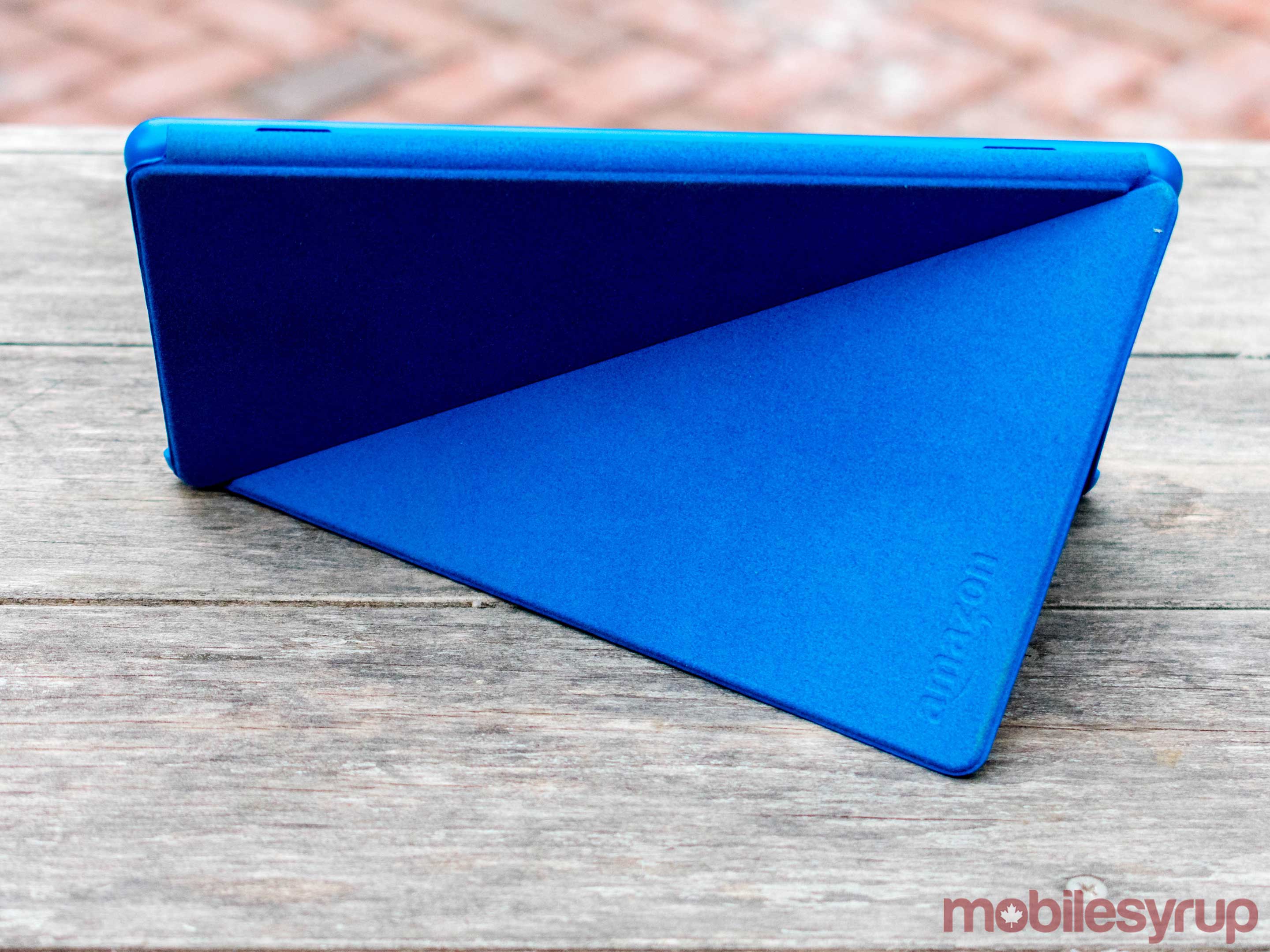 Fire up the Amazon Fire HD 8, and you’re greeted with a series of screens punctuating the fact that you’re no longer in Google territory.

Instead of asking users to input their Google account details, the tablet instead prompts users to log in using their Amazon account. As the boot-up process continues and the tablet takes users to the homescreen, it becomes immediately clear that this is not stock or even skinned Android. Instead, this is Fire OS 5.4 — clearly designed to emphasize Amazon’s own software prowess. 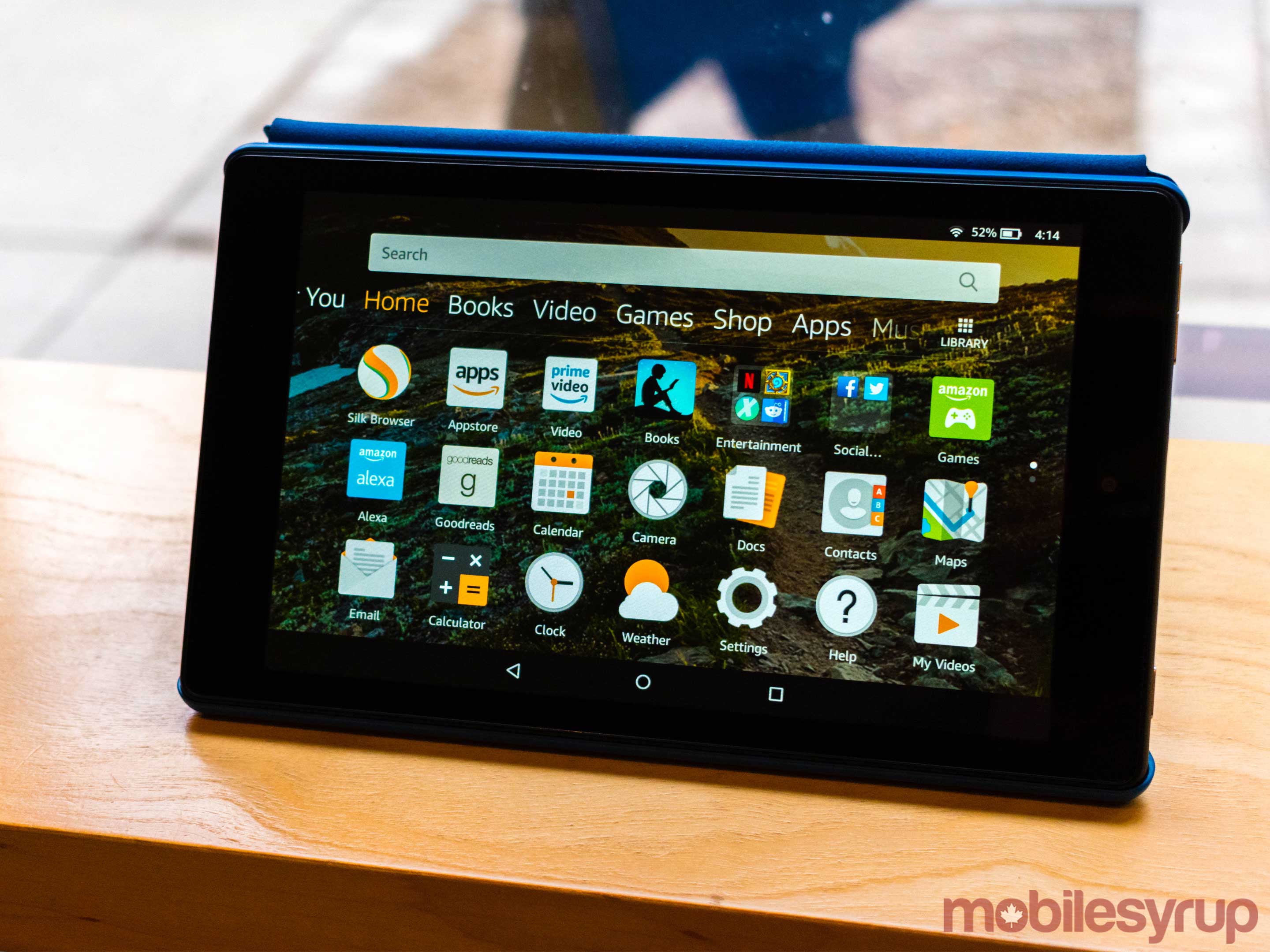 Make no mistake, this is very much an Amazon tablet, and if users purchase the Fire HD 8 expecting something resembling a typical Google ecosystem experience — even a heavily skinned experience found on something like the more expensive Galaxy Tab — this is most certainly not the device for that experience.

This is an Amazon device through and through, right down to homescreen that proudly divides the tablet’s ecosystem based on categories like ‘Music,’ ‘Videos,’ ‘Games’ and ‘Books.’ Eagle-eyed readers will also note that these are all categories in which Amazon has made media investments. 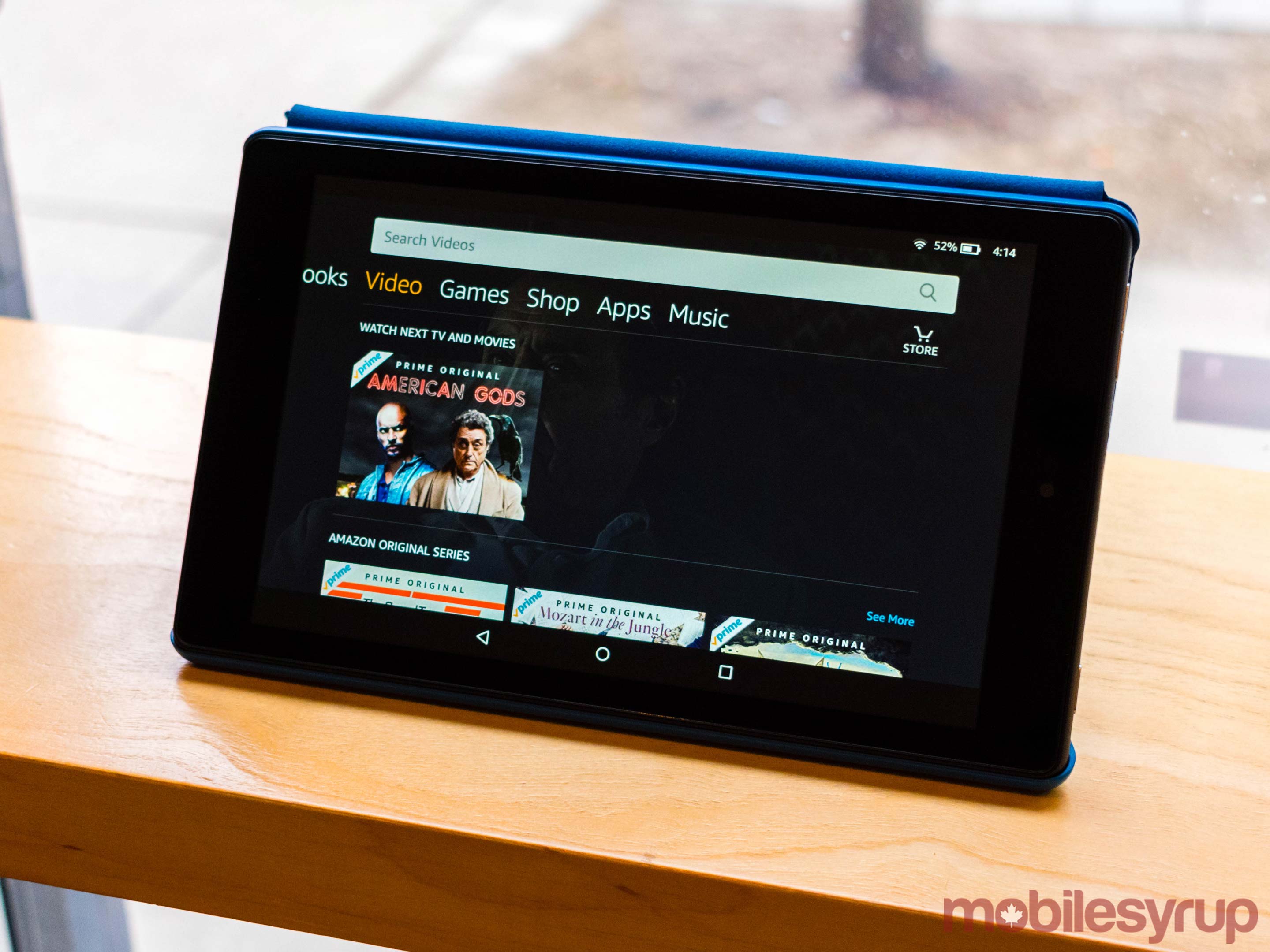 Amazon’s recent turbulence with Google means that even if users want to install Google apps to use alongside their Amazon variants, they can’t. Searching for anything Google-related on the Amazon Appstore returns webpage results.

Users can’t install Google Drive, but they can install a link to the Google Drive webpage. The YouTube app also can’t be installed, but Amazon’s Silk Browser can access the mobile and desktop YouTube websites. There’s no Google app, but you can still use the Silk browser to conduct Google searches. 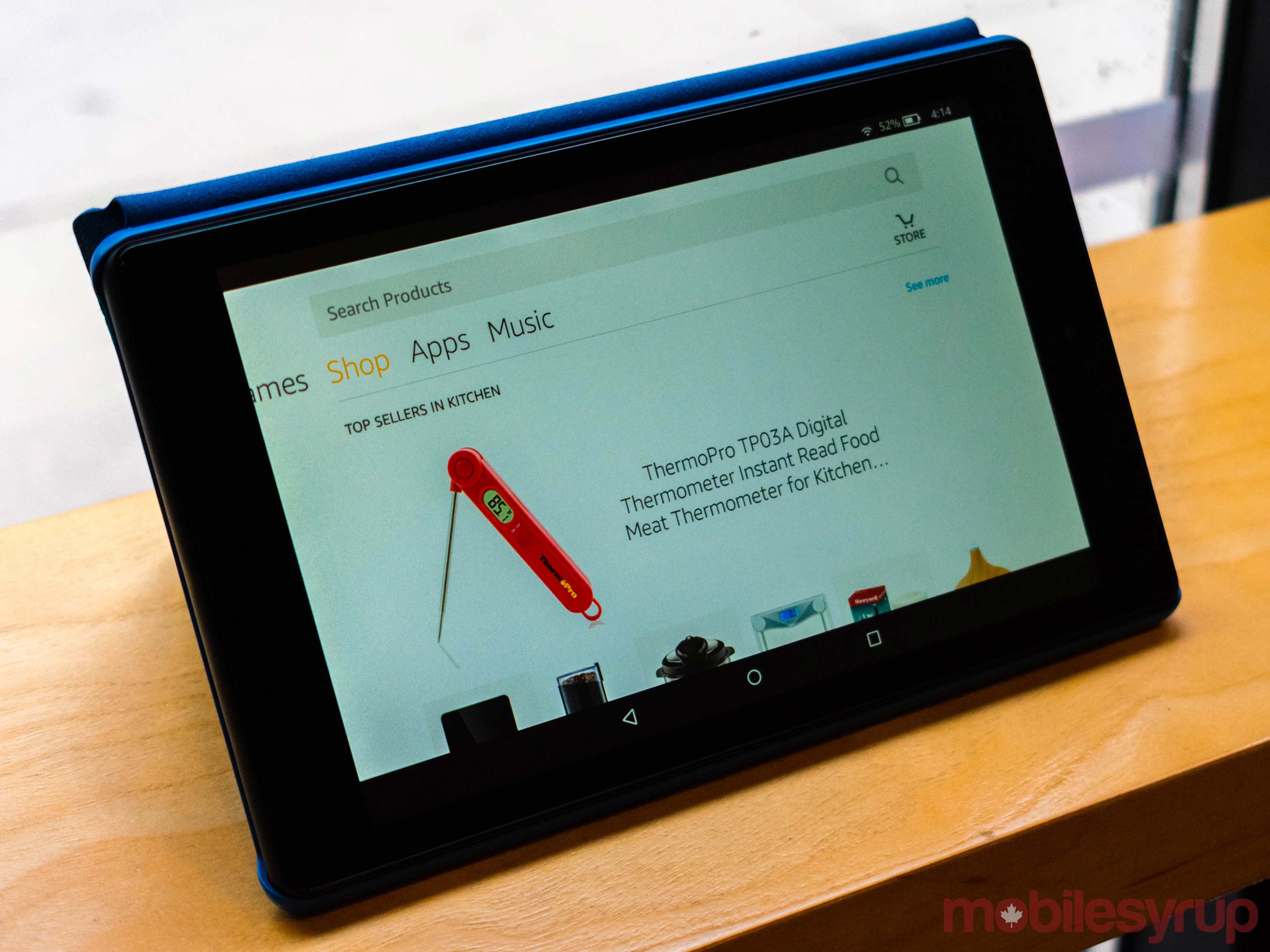 In a word, the process if antiquated, and rather reminiscent of the early days of mobile apps, when most apps were simply slightly modified versions of webpages, rather than full-fledged apps on their own.

Popular apps like Facebook, Twitter, Netflix and Spotify are available, but niche games — apart from incredibly popular titles like Monument Valley — are absent. Essentially, if you want an app that isn’t an already popular social media or streaming service, you’re not going to find it here. 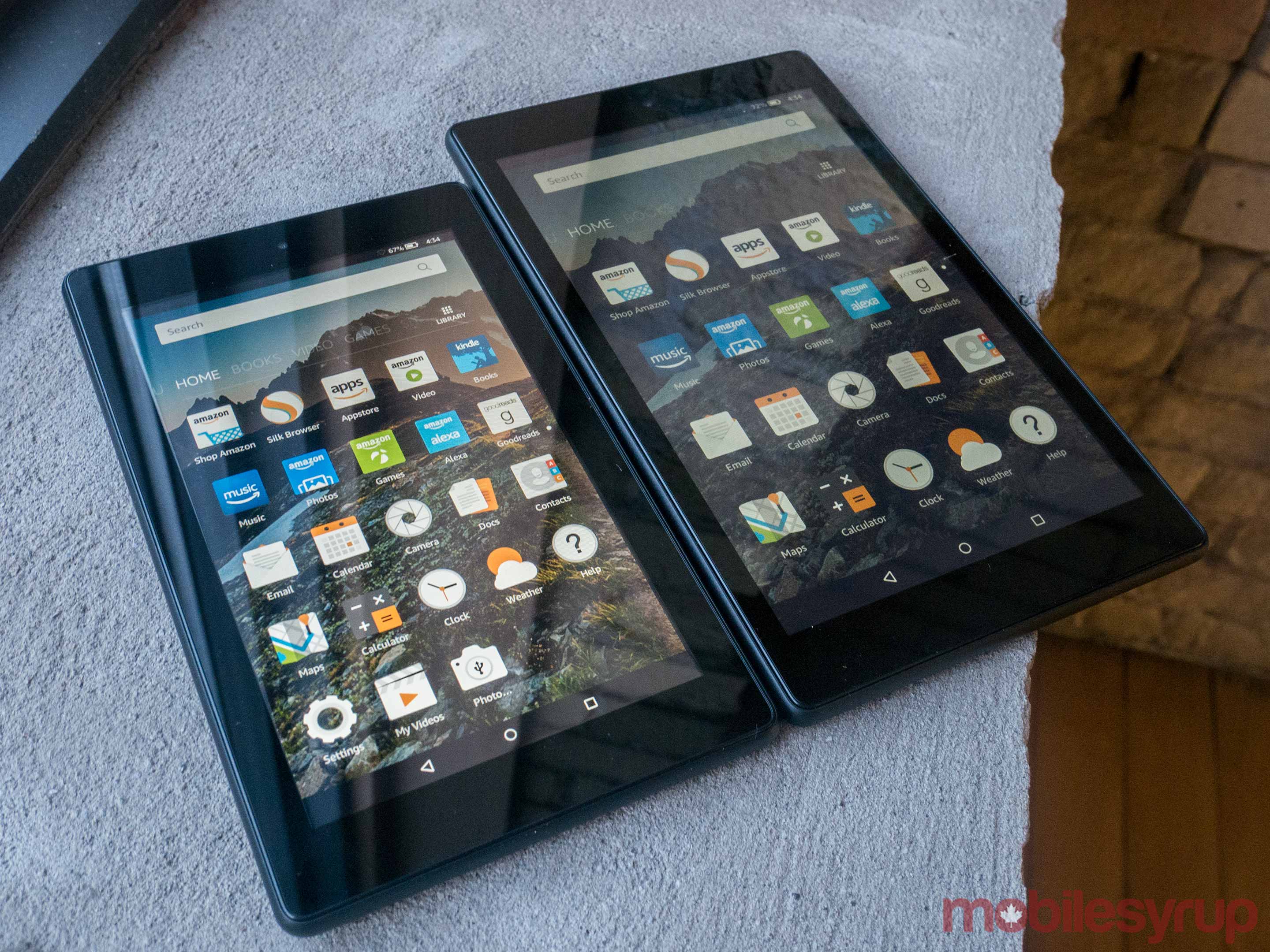 Amazon does sell a seven-inch Fire tablet — the Amazon Fire 7. The device comes in an 8GB variant, as well as a 16GB variant. The smaller tablet produces a smaller footprint than its eight-inch sibling — and carries a smaller battery — but in terms of sheer processing power and memory, the two devices are indistinguishable.

Addressing the tablet-sized elephant in the room

Amazon's Fire HD 8 isn't a heavy-duty tablet meant to replace a daily desktop or laptop computer. It's also not an Android tablet designed for anyone looking to access the full suite of Google apps and services.

Instead, it's very much a media-oriented device, clearly intended to be used by those Amazon aficionados looking for a tablet to take on long trips or to play a few rounds of Hearthstone.

Once one accepts that this isn't a device packed with processing power -- and once one acknowledges that its cost is actually one of its best features -- the Amazon Fire HD 8 reveals itself to be a tablet full of hidden worth.

"A low-cost media machine meant for people looking for another Netflix screen."