It took a while, but Acura has finally overhauled its infotainment system with something so new it bears no resemblance to what came before it.

If you knew someone who drove a Honda in the last couple of years, you may have bemoaned their ability to use something more smartphone-friendly. Given Acura is supposed to be Honda’s luxury brand, the delay must feel grating. I won’t sugarcoat things here. The good news is that True Touchpad is a big step up. The bad news is that it’s not backward compatible.

I got to test it out in the first model to feature True Touchpad, the 2019 RDX compact SUV. After Acura teased it on the Auto Show circuit throughout 2018, and then brought it to market, the dashboard experience looks totally different. Although I tested the Platinum Elite trim, there’s no difference when it comes to infotainment setups, except that the Platinum Elite and A-Spec trims getting a better audio system. 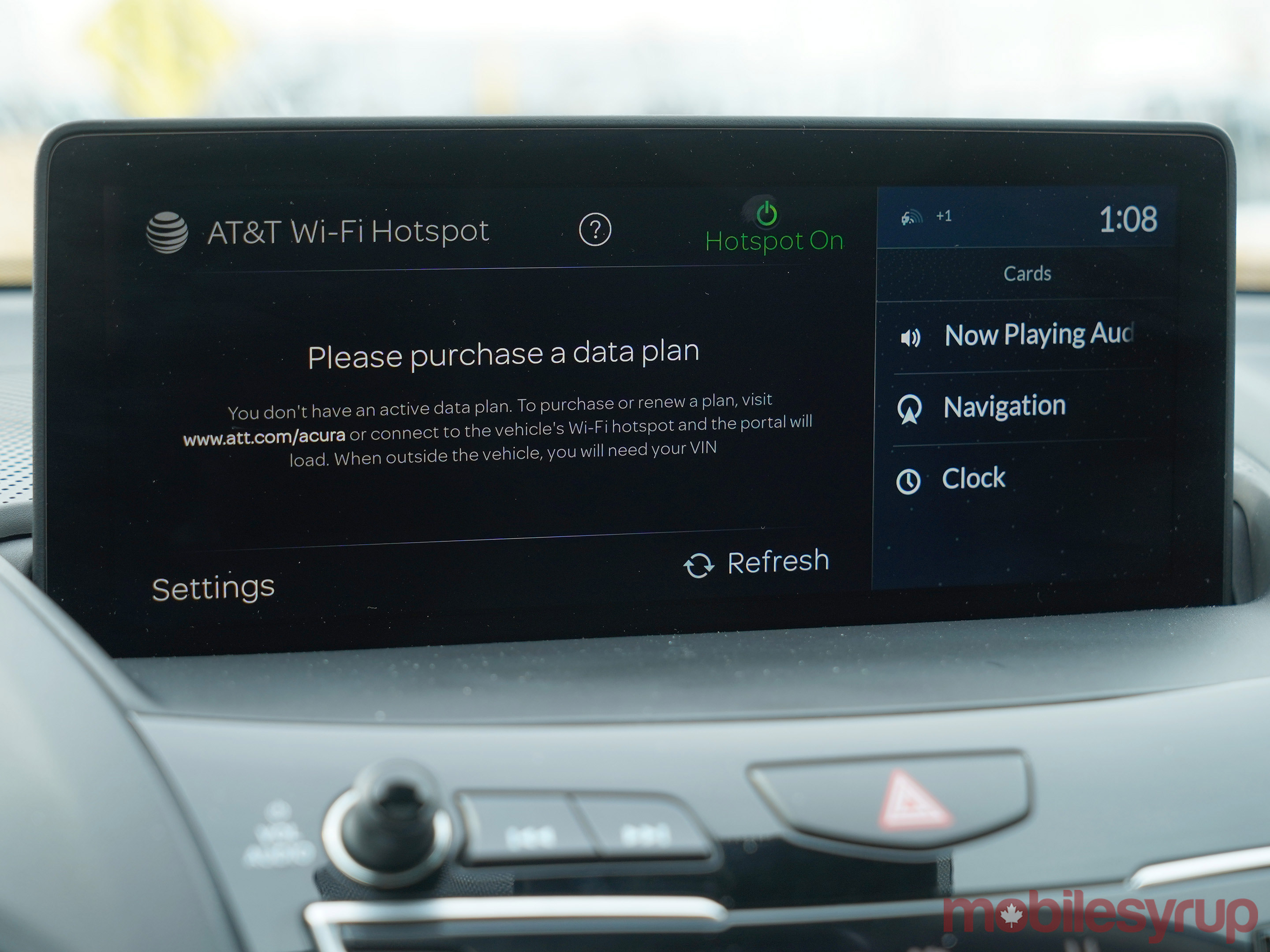 The older AcuraLink system used two displays. One showed navigation maps, music and menus, while the other was designed to be the primary control input. A rotary dial acted as a separate, yet connected, input method. You could either touch or rotate, or both.

As I noted in my review back in 2015, the setup was clunky and lacked an upgrade path to something more user-friendly. True Touchpad is a departure from all of that.

Instead of two screens, there’s one 10.2-inch display that is not touch-sensitive, but is a significant upgrade. Acura replaced the dial with a touchpad that’s somewhat multi-layered. There are different sections doubling as buttons to provide some tactile feedback when clicking.

The back and home buttons are fairly obvious, while another on the top right swaps the two parts of the display. Rather than take up the entire width, it splits up, where three-quarters goes to the main interface, while a contextual part occupies the other quarter. It’s not an unusual layout, as other automakers have done something similar. I’ll get to the nuances of the buttons later.

The small section underneath that button acts as a toggler for the three pieces of information that quarter can show: clock, mapping and music. Swiping or pressing the button up or down toggles between those options. Press the swap button above and whichever info is showing occupies the larger piece of real estate on the screen.

CarPlay comes included with the system, though Android Auto is currently unavailable. Apparently, it’s Google causing the delay, not Acura. Since this is a different input method than most cars, Acura reps told me Google has to approve it before it goes live. When that happens isn’t clear, but either way, Android users won’t be left in the lurch. 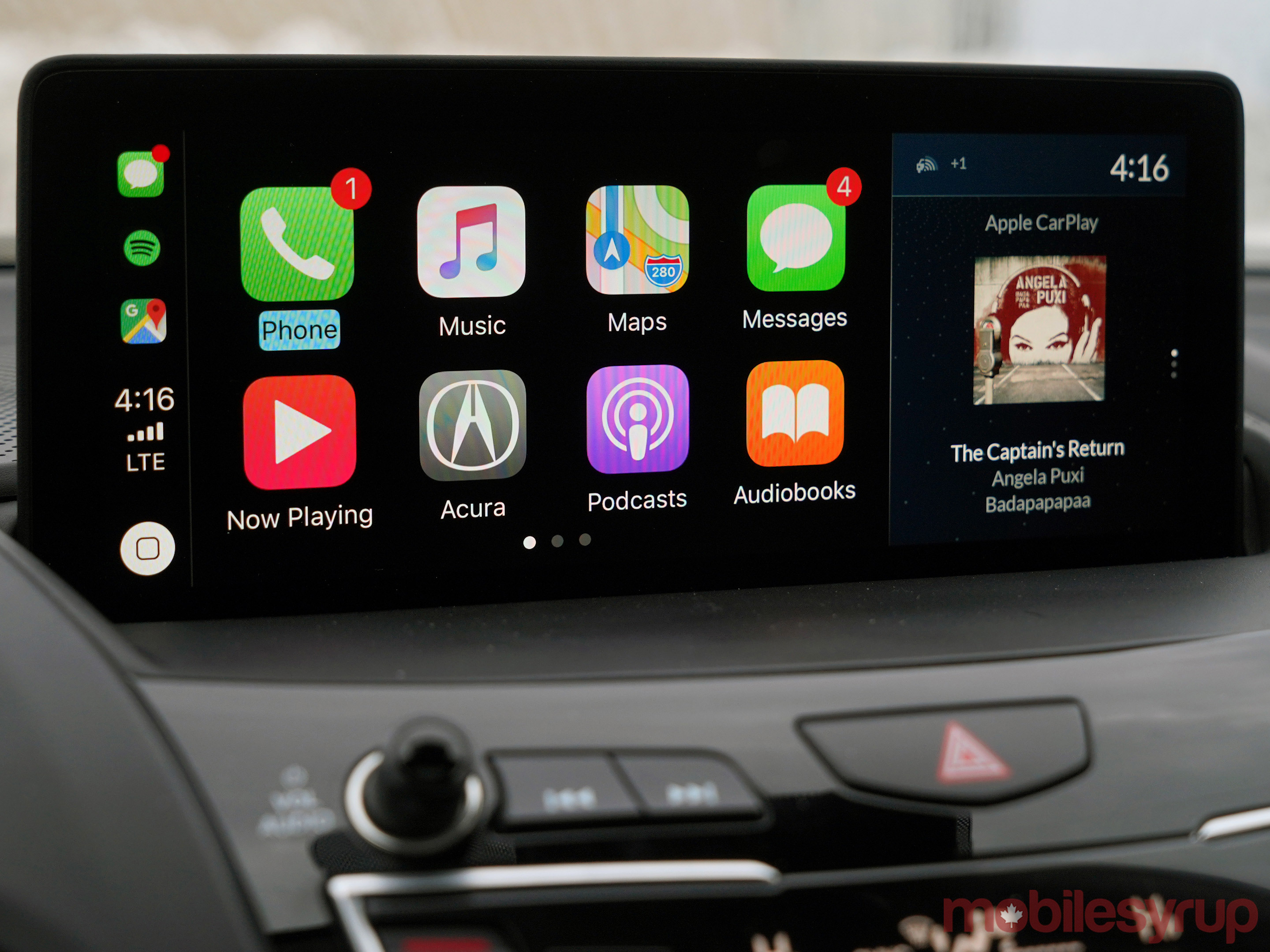 There’s a dedicated USB port for connecting smartphones, especially for CarPlay and music playback via True Touchpad’s menu. Another USB port below the centre console is also there for plugging in to charge. Ditto for the 12-volt socket. The aux-in jack wasn’t hard to find in the centre console.

Bluetooth is standard, and Siri Eyes Free does work in cases where you’d rather not go through CarPlay. Long pressing the voice button on the steering wheel will bring up Siri in either setup. A short press triggers Acura’s own voice assistant, which is pretty basic. The lack of Android Auto also means no Google Assistant via Bluetooth with a long press. I assume that might change once Android Auto goes live, but I never got a definitive answer from Acura.

The RDX and True Touchpad support LTE for an in-car Wi-Fi hotspot, but unfortunately, there was no data for me to test it with. Acura points customers in AT&T’s direction, since buying data packages goes through the American carrier, much like they do with just about every other automaker offering in-car LTE. Note, however, that you do get a free trial to test out the hotspot before committing.

Somewhat surprisingly, Acura doesn’t include a wireless charging pad in the car. Nor does CarPlay work wirelessly, so keeping a cable handy to charge is necessary.

Rather than using satellite for navigation, the maps are loaded onboard the vehicle — a carryover from the previous system. Maps are then updated via the cloud, courtesy of the car’s built-in SIM. It can also search for points of interest (POIs) that way, though you would have to accept vehicle data sharing when pairing your phone for the first time to make that work. The data used for all that doesn’t count against any bucket you may end up buying. 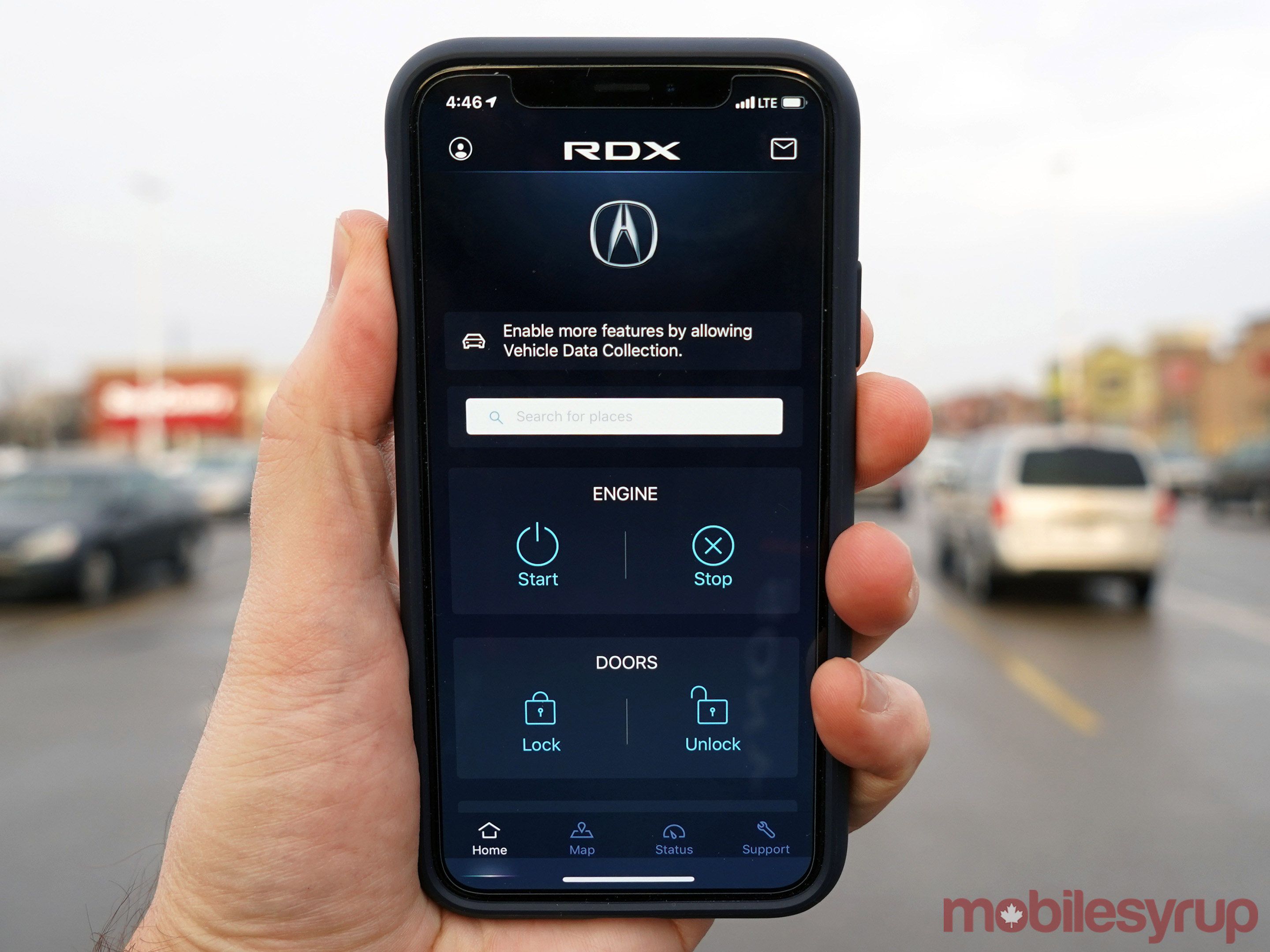 On its own, True Touchpad offers no app integration at all. Well, at least for third-party ones. There’s no Stitcher, or Aha, or iHeartRadio, or anything else that works directly from the interface itself. You’ll need CarPlay or Bluetooth from your phone to do that.

Actually, there is SiriusXM, though it’s not exactly an app, just an option within the menu. It’s free for the first three months, while SiriusXM Travel Link and Traffic Plus data services are complimentary for five years.

The AcuraLink app for iOS and Android works with the RDX, and offers better integration than I previously experienced. I could remote start the car, lock or unlock doors, set cabin temperature, check basic diagnostics, know how much fuel I have and communicate directly with Acura through it. I could also send an address so that turn-by-turn navigation could start once I got in.

This AcuraLink setup is separate from what came before because it’s more streamlined and better executed. The Find My Car and Vehicle Monitoring Alerts did work as advertised, so it’s nice to know there’s some peace of mind in knowing if a thief (or your teen?) takes off with the car.

As before, the package comes in three different tiers. Security is the starter, and comes free for the first four years, mostly focused on security and roadside assistance. Remote takes those and adds all the app-based features I noted earlier. Concierge takes things further with support from a live agent, who can help with directions, booking hotels, making dinner reservations and finding events going on in whatever city you’re in.

Remote and Concierge are each 90-day trials, though in order to get the latter, you have to get the former. As a result, the annual subscription fee could range from $129 to add Remote and all the way up to $359 for the whole shebang. You can’t buy any of these on a monthly basis. 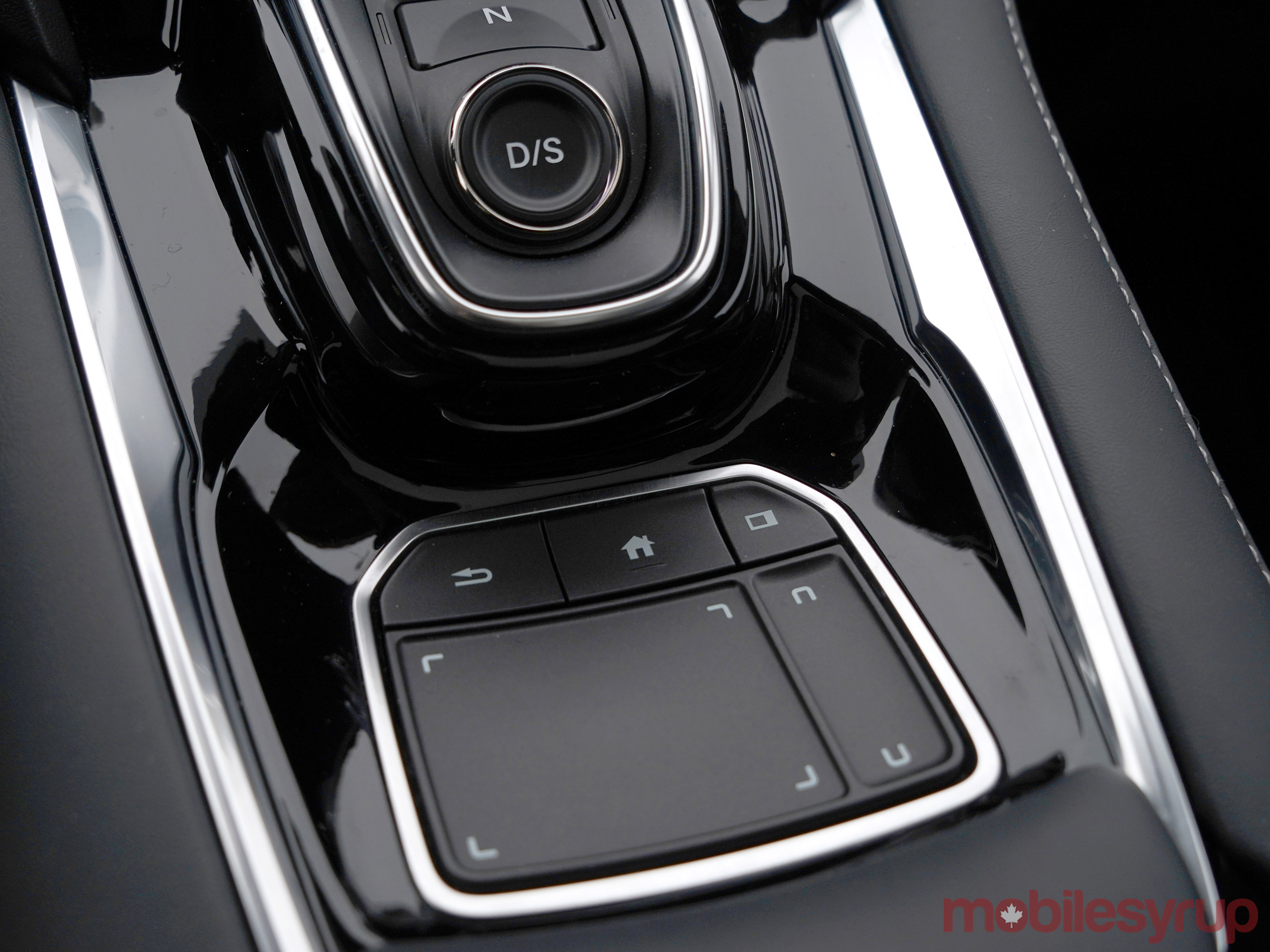 The Touchpad has three levels of sensitivity, with Low being the default. I found it to be fairly sensitive already, but you might feel differently. Swiping left and right to navigate through menu pages, while tracking along to highlight different icons on the menu felt finicky at first, but it grew on me over the course of the week I had the RDX.

Acura smartly allows owners to rearrange icons as they please, making it possible to keep your favourite ones in one page, so as to avoid swiping all the time. I purposely didn’t do it because I wanted to gauge how effective swiping was.

Before long, I got used to using it with CarPlay. Navigating the interface was relatively painless, except for moments where I was trying to get to a certain icon or option, only to skip past it. Rotary dials tend to be better at that because of the haptic click you feel with each turn, making it easier to barely look at the screen when using it.

Over time, I can see the Touchpad being a worthy alternative. It may take a little longer to get there, but it was surprisingly intuitive. The visual highlights onscreen helped me feel that what I was doing had some synergy to it.

The pad also recognizes letters drawn on it, so if I wanted to look for a place, I could draw out the first two or three letters and have it come up. While skeptical, I was impressed at how easy it was. It wasn’t something I would do often, since voice (or a passenger) could do it more efficiently, but it’s a good step forward.

Acura’s voice recognition is decent but I really only used it for basics, like tuning radio stations or making calls. There is text and email integration, and it’s not that bad for texts, though you would only really want to use it if you’re an Android user waiting for Android Auto. Siri is still better through CarPlay.

With a heads-up display (HUD) built-in, the True Touchpad system could convert over to it, too. The dial on the steering wheel can toggle through the HUD menu, letting me choose between audio, navigation, points of interest and phone calls. It was an interesting way to limit using the Touchpad itself, even if I came away with mixed results.

Acura’s delay makes sense in that True Touchpad isn’t something you’ll find in a Honda vehicle. Here was a brand that desperately needed an overhaul, and it finally delivered.

It’s just unfortunate the company didn’t roll it out to more models right away. The old AcuraLink system feels terribly obsolete next to this, which is indicative of just how low the bar was for Acura to cross.

The thing about True Touchpad is that I suspect it will be a little divisive. I can see people liking or disliking it within minutes. I don’t know for sure, but that line might edge over further toward the positive camp over time. It’s just nice to see Acura give drivers something to work with that feels like it’s in this decade.

"The old AcuraLink system feels terribly obsolete next to this, which is indicative of just how low the bar was for Acura to cross."