MSI's GS75 takes power and stuffs it in a sleek, stylish package without the garish excess of the standard gaming laptop

I’ve never been a fan of gaming laptops.

To me, a laptop needs to be portable — small enough to slide into a backpack and light enough that I don’t notice it’s there. Further, I like simple-looking machines. I’d take the design of a MacBook over any laptop with garish lighting and other gimmicky features. And of course, the inside has to be packed with powerful components and long battery life.

Gaming laptops almost always deliver on the performance part, but they fail in every other regard.

Worse, gaming laptops come at a premium price tag. It never made sense to me — why pay more for a PC that will have inferior performance due to stricter thermal throttling and ‘portable’ components designed for laptops that don’t work as well as their desktop equivalents?

However, MSI wants to change that with its new GS75 Stealth laptop, and I have to say, I am impressed. The Taiwanese technology company went and did it. It made a well-designed gaming laptop with excellent performance. Unfortunately, the GS75 isn’t perfect, and it still costs a lot. 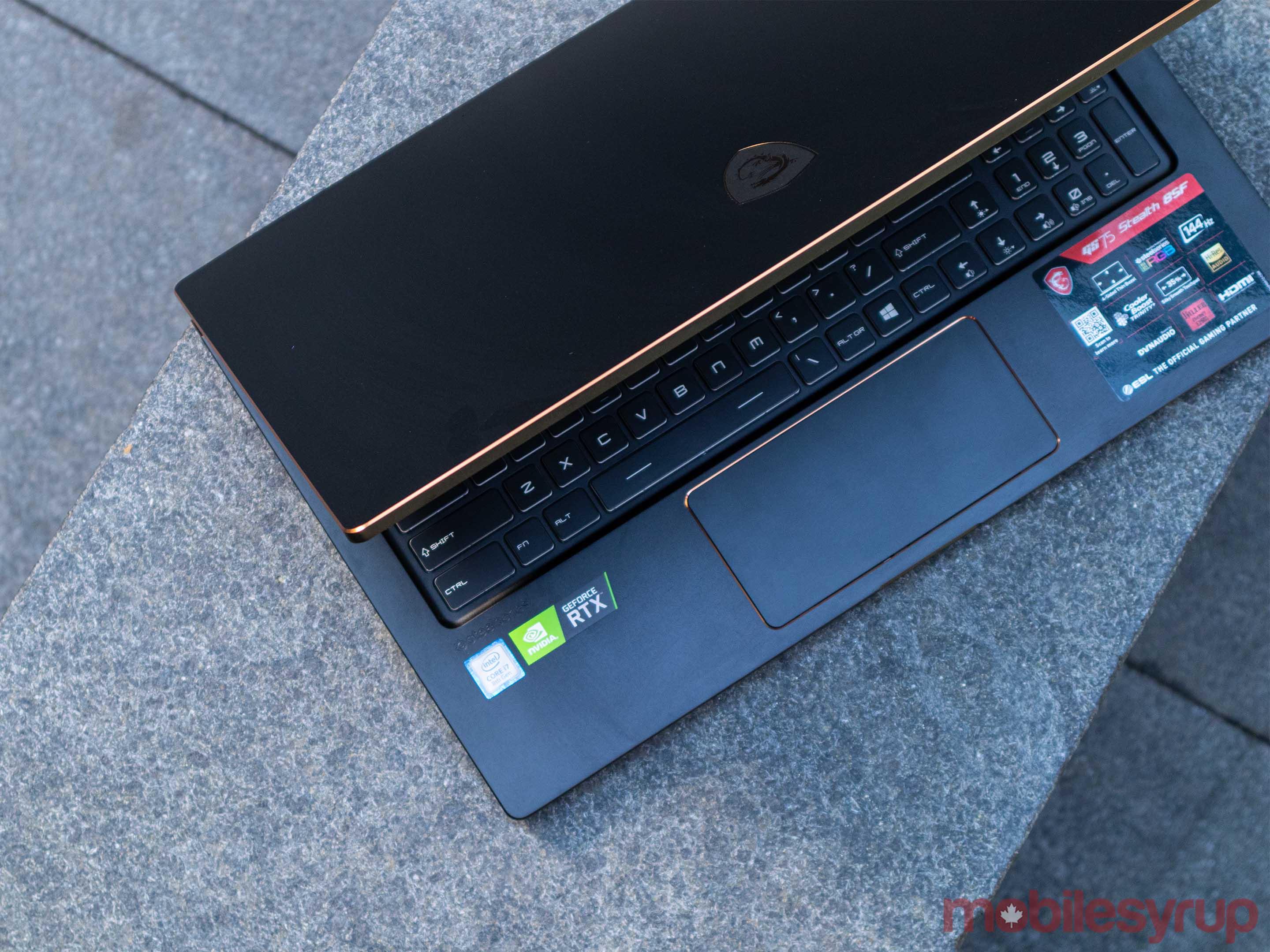 From the moment I first cracked open shipping packaging, this laptop impressed me. Everything about the design of the GS75 Stealth, from the box to the computer itself, was thoughtful and intelligent.

This is not your run-of-the-mill gaming machine, bedazzled in bright colours and exuberant LED arrays.

Instead, you get an all-aluminum body anodized black with gold-coloured accents on the hinge, around the logo and even in the fan port on the side of the machine. It looks sharp, and I’d have no problem opening it in a meeting with my boss.

One other issue with the weight was that the laptop seemed to struggle with its mass. If I picked it up with one hand in the center, I could see the chassis bending slightly under strain — not ideal in any computer, but especially not in one with parts as expensive as those inside the GS75. 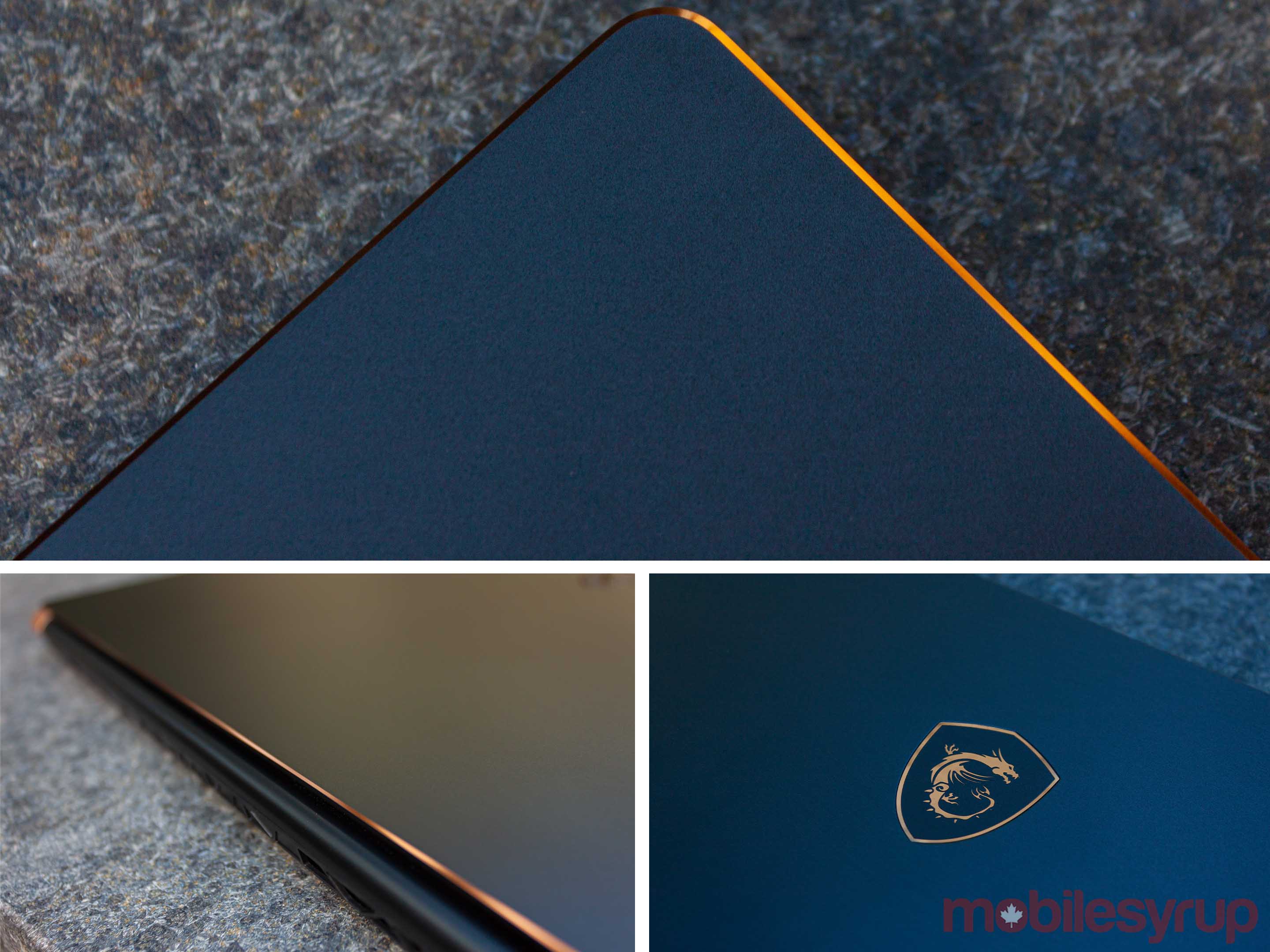 The power brick that comes with it is monstrous as well. When all packed up, this thing is a back-breaker, but hardly the worst offender when it comes to gaming laptops.

The Sealth sports a 17.3-inch, 1920 x 1080 pixel resolution display with a 144hz refresh rate and narrow bezels on three out of the four sides. The bottom bezel is thicker because of the hinges — acceptable, save for MSI’s adamant claim that the Stealth has 4-side thin bezels. Colours are good, but not great, making the display more than usable. It also gets incredibly bright.

Abandon the keyboard, and you’ll be happier 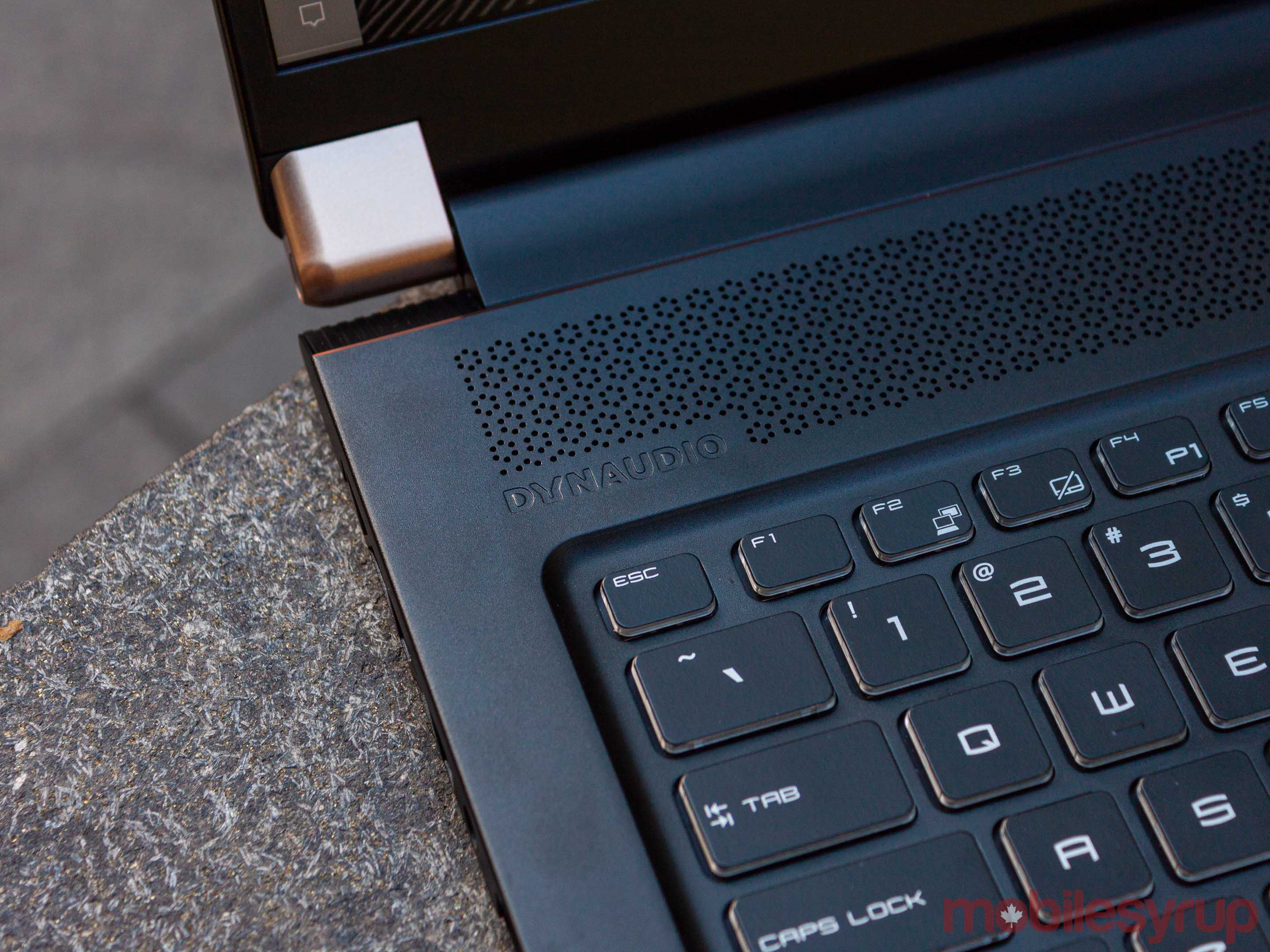 Below the display is the keyboard, which features RGB backlighting and a distinctly ‘gamer’ font that looks terrible. Backlighting is always welcome, and colour options are a bonus.

MSI did this right and added thoughtful features like when the user holds down the function key, only the requisite keys, like the volume controls, light up. This makes it easy to spot keyboard shortcuts. The laptop also comes loaded with software to control the RGB backlighting with a variety of preset or custom-made patterns, but when trying it out, I managed to turn off the backlighting entirely and was never able to turn it back on. The experience was somewhat indicative of the entire software package, but more on that later.

MSI notes the keyboard is a gaming keyboard from SteelSeries and it does feel nice. Keys clicked nicely and had excellent travel for a laptop keyboard, plus it had a number pad. I would have used it without complaint save for two glaring issues. 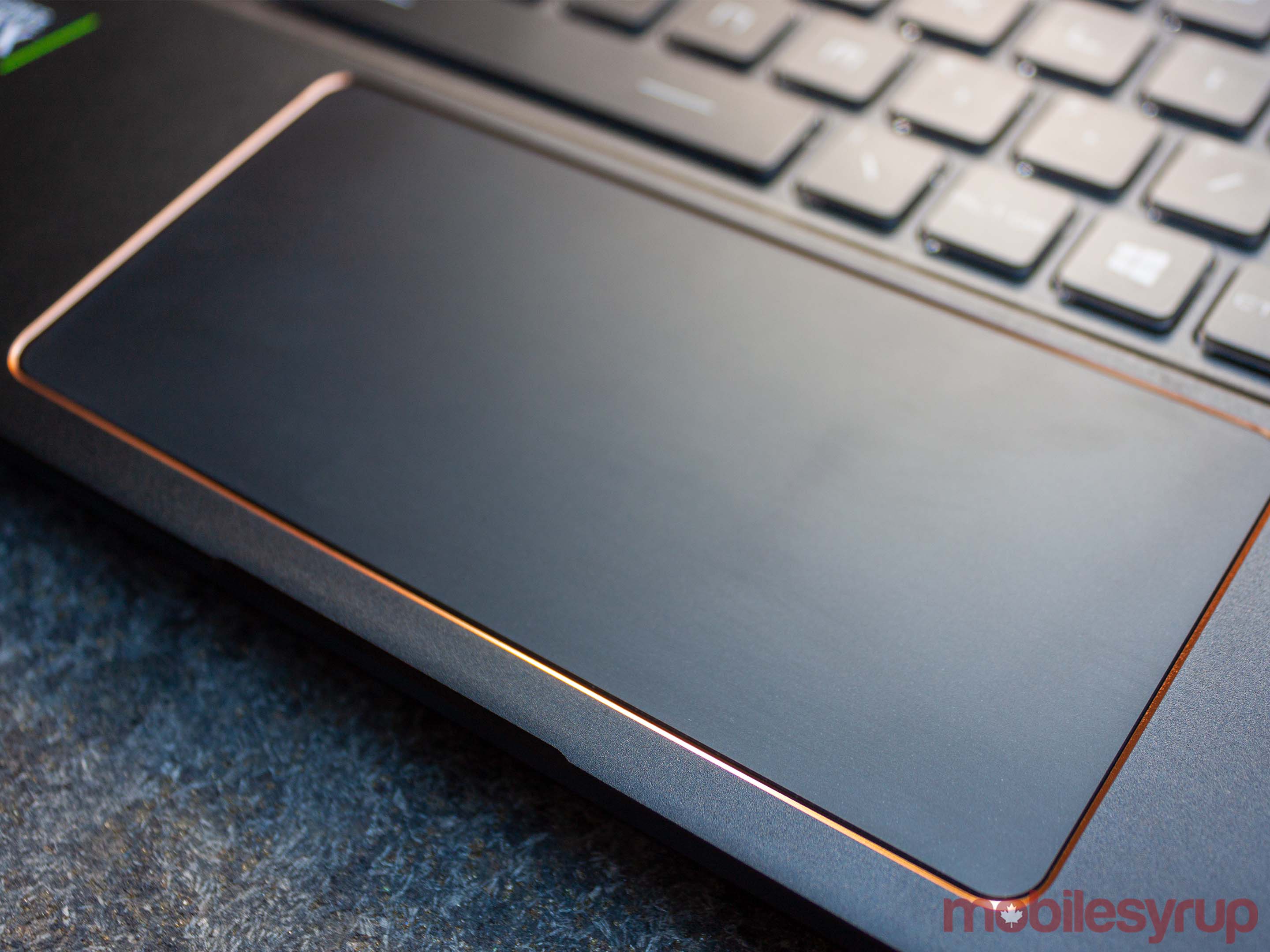 As someone who types a lot, the keyboard placement quickly became unbearable. It felt wrong when typing at a table or desk, and using the Stealth on my lap felt off-balance because I had to slide the computer further back than usual to type.

The second issue was the trackpad. Because of the keyboard placement, the trackpad was squished awkwardly down towards the bottom of the machine. It was quite short, and MSI tried to alleviate that by making the trackpad wider. It was a good effort, but ultimately it made things worse, as the wider trackpad got in the way of my palms when typing.

It’s a shame, really, as both the keyboard and the trackpad were excellent. Had they been placed normally, there wouldn’t have been an issue.

Of course, this is a problem easily avoided — simply connect a keyboard and mouse. Unfortunately, that goes against having a portable computer in the first place.

It’s what’s on the inside that really matters 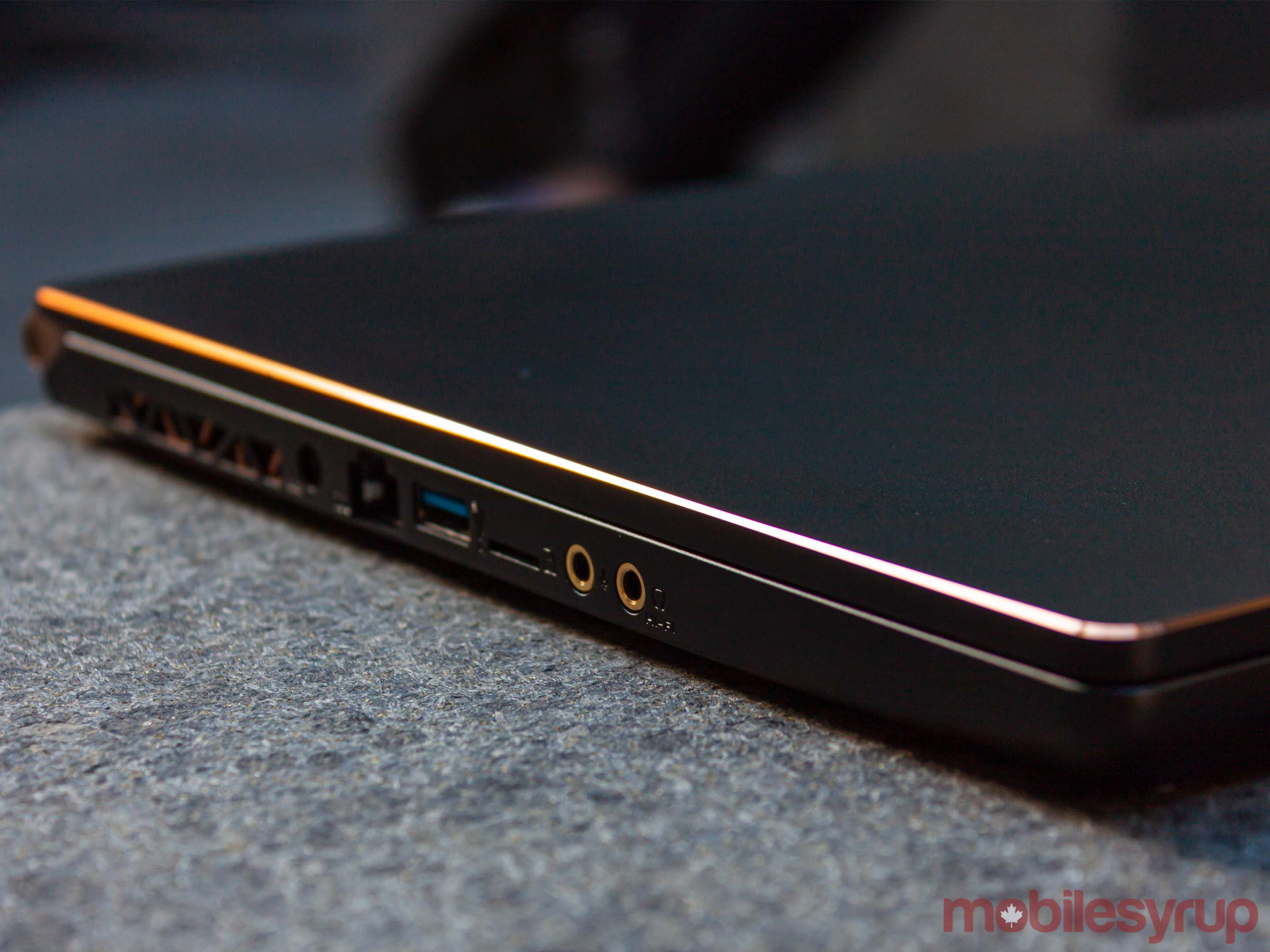 Of course, the inside of the GS75 is as important, if not more significant, than the looks on the outside.

Do all those numbers add up? 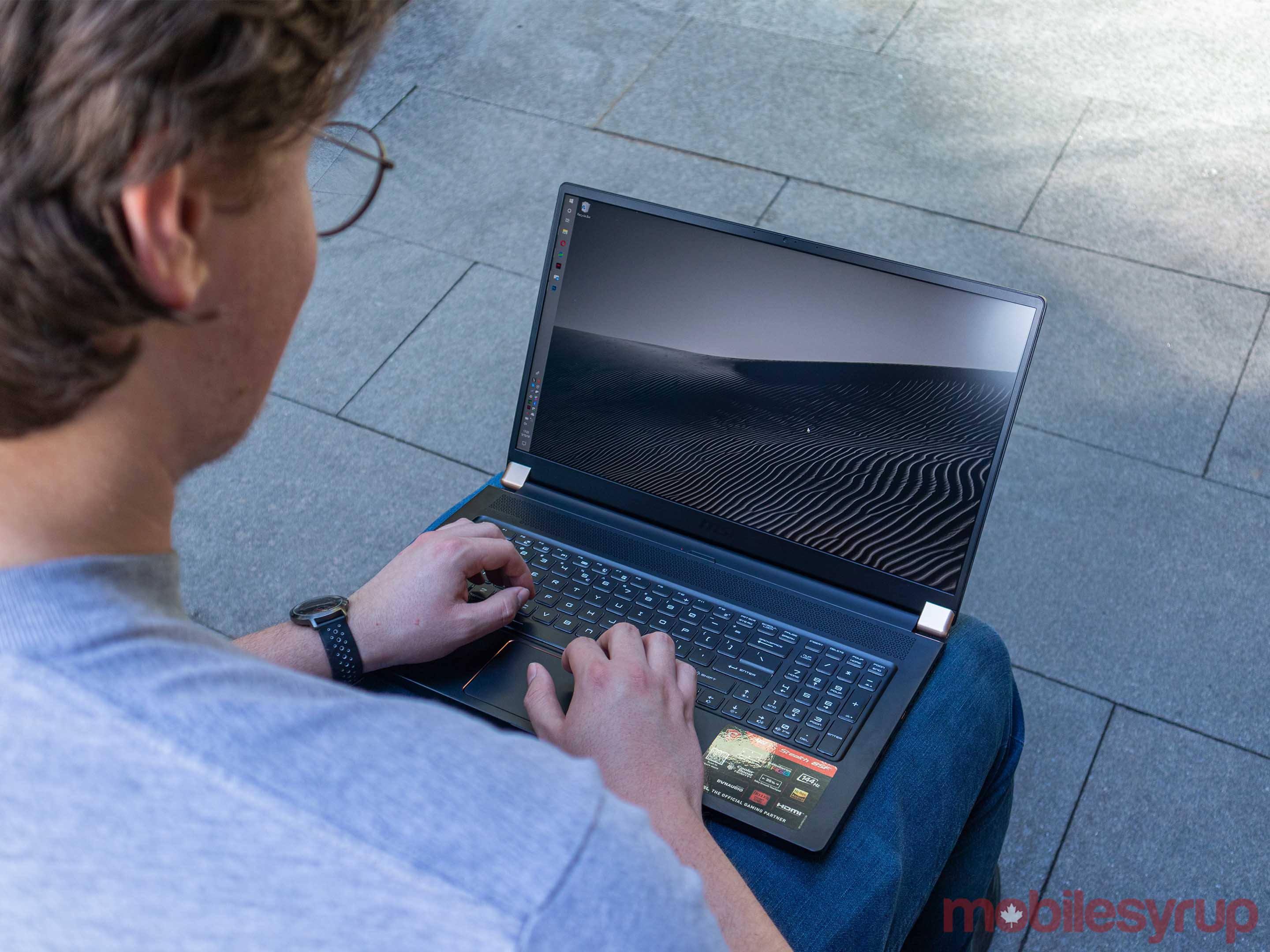 That’s a lot of numbers, but practically, what do they mean? Well, this thing is a beast. I ran it through a few benchmarks to measure CPU and GPU performance, then used it to play the most graphically intense game I have in my library, Battlefield V (BFV).

Benchmarks first; the GS75 put out some solid numbers. I kicked things off with Cinebench R15 to test the CPU. I ran both the multi-thread and single-thread tests, as many real-world workloads still only use single-threads.

My review unit achieved a Cinebench score of 1,104 for multi-thread and 168 for single-thread, putting it right in line with competing laptops running 8th Gen Intel CPUs. 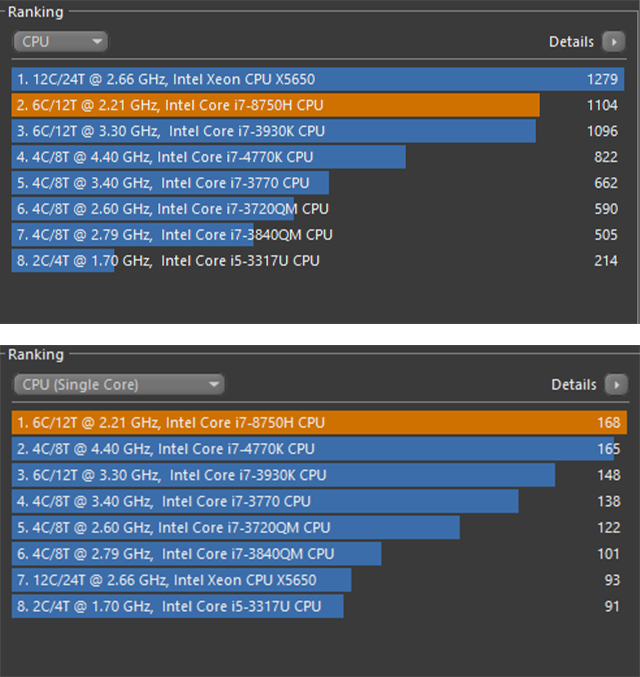 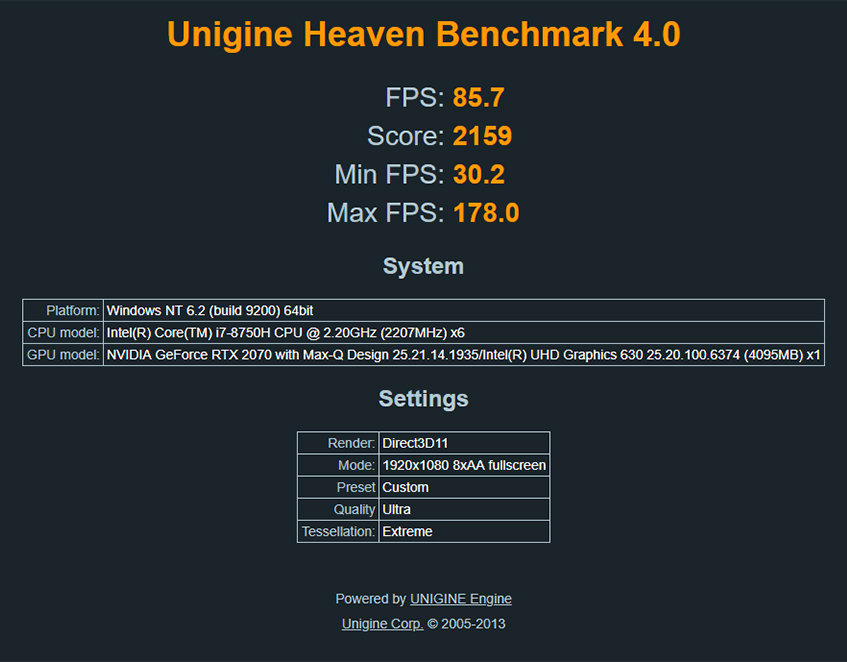 While those stats certainly speak to the power of the GS75 and it’s components, they don’t tell the whole story — benchmarks seldom do.

With that in mind, I went for a quick romp in BFV to see how everything held up. With the graphics locked to the Ultra setting, the Stealth claimed a solid average of 70 to 80 FPS. It did spike up as high as 100 FPS when the action slowed down, and there were a few moments of stuttering down to 50 FPS, but overall it ran excellently.

The only real issue was that the fans ramped up to keep things cool, and while successful, they were so loud I couldn’t hear the game through the laptop’s less-than-stellar speakers.

I also relied on the GS75 as my work laptop for a few weeks during the review and performance was consistently good. My typical workday involves running tens of browser tabs and Photoshop all while streaming music and the Stealth never broke a sweat.

Preloaded software is a miserable experience 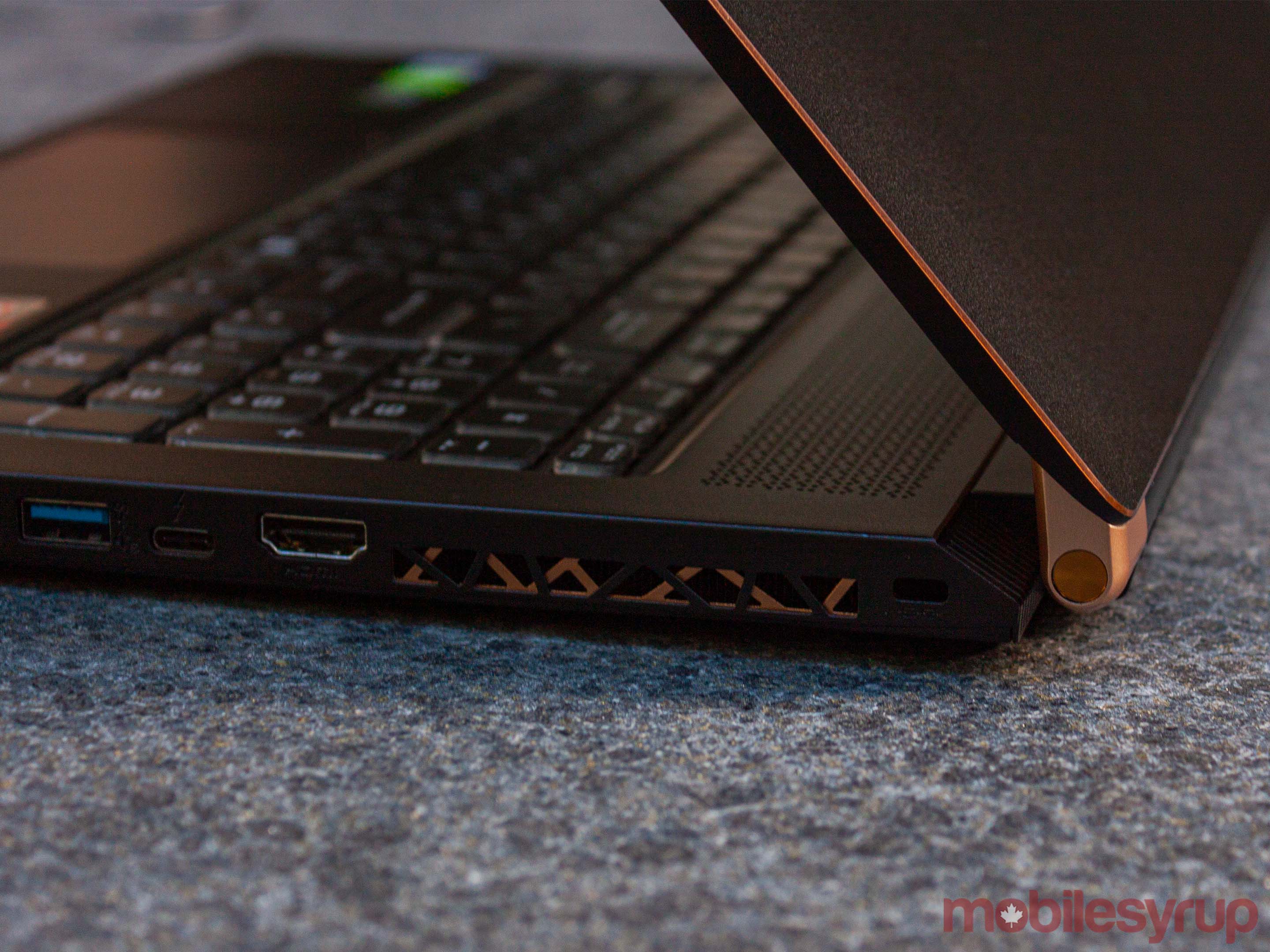 Windows laptops have had one ongoing issue for some time: preloaded bloatware. It’s a prevalent problem, one that even affects Microsoft’s own Surface line.

It’s something I could forgive if it wasn’t so pervasive and annoying. MSI, unfortunately, is one of the worst offenders here. The GS75 comes loaded with software and programs, many with good intentions, but they lead to a confusing and poor experience for me.

The main issue was that MSI engaged in a variety of partnerships to assemble components of the laptop, and nearly every part had some form of controller app. For some, that’s a good thing. These apps offer lots of customization options to crank out the best performance. For most, they’ll be a nuisance.

When I first booted up the GS75, I began my routine, first-start maintenance: uninstalling all the bloat. However, it’s hard to tell what’s important and what’s not. For example, one of the apps I contemplated deleting was simply labelled ‘Killer.’ However, I later learned it was actually the control panel for tweaking the Wi-Fi and Ethernet hardware for optimal network performance.

I never used it during my review, save opening it once to see what it did. Outside of providing some network monitoring services, the only discernable feature was that it turned on ‘Gamefast,’ although the app didn’t explain what that actually means. Worse, Googling the app provided no consensus on what Killer did or whether it was beneficial. The only helpful information I found on it was that leaving it or removing it could both cause headaches for the user.

Killer wasn’t the only poor software on the laptop. I already mentioned the issues with the RGB lighting controls, but MSI’s own ‘DragonCenter’ app for tweaking performance and power-saving options wasn’t great either. The first time I launched it, a three-dimensional, Clippy-like dragon character appeared and asked me questions about how I used my computer so it could adjust my settings accordingly. When I finished answering, it vanished without making any noticeable change. Further, I found I never had to make tweaks using the software as things ran well from the start.

I’m sure some enthusiasts out there could find uses for these software extras. Beyond pinging me with update notifications every time I turned the laptop on, they didn’t do much for me.

Portable gamers can't go wrong with this one

At the end of my time with the MSI GS75 Stealth, I'm still not on board with gaming laptops. Despite my preferences, MSI does a lot right with its GS75, and if I were looking for a portable gaming computer, this would be the one.

MSI nailed the design of the GS75, making it sleek and stylish without going overboard. Further, the Taiwanese company packed an incredible amount of power into the laptop. According to Amazon Canada, my version of the GS75 retails for $3,075.81, but there are an incredible number of variations on the GS75 with different amounts of RAM and storage, and different GPU configurations. However, the MSI GS75 still comes at a premium. As a test, I created a quick, comparable build using a website called PC Part Picker, which lets you select all the components for a PC build and warns you about compatibility issues. One benefit of the system builder tool is that it also pulls the current cheapest price for a given part from several online stores. According to my test, you'd likely pay around $1,800 for a comparable computer with an RTX 2070 or $2,200 for one with an RTX 2080. In other words, you're looking at an extra $1,000 to get a GS75 over a similarly specced, or even more powerful desktop you could build yourself. For a few hundred more than the cost of building your own desktop, you could also get a pre-built PC from Best Buy and still be ahead a few hundred dollars. Ultimately, if you're looking for a great PC gaming device, the GS75 isn't the best value for your money. If you're looking for quality PC gaming on-the-go, and cost doesn't matter to you, you can't go wrong with the GS75.

Are you getting the best value with the GS75? No. Are you getting a crazy powerful laptop that can chew through frames and offers a solid gaming experience? Yea, that's exactly what you're getting.