World Vision has delved into the world of technology to give viewers an immersive experience surrounding refugees and their lives ahead of World Refugee Day.

From June 18th-20th, the organization is displaying an exhibit in Toronto’s Union Station to bring awareness to refugee life through the use of modern technology.

Rob Garcia, the senior manager of new product development and channel innovation at World Vision, told MobileSyrup that the organization hopes to raise awareness through its three installations.

The goal of the exhibit is to “commemorate World Refugee Day, make sure people are aware of the day, get people aware of the work we’re doing in dangerous countries, and to help build empathy,” said Garcia.

Using AR to tell a story

The augmented reality (AR) installation at the exhibit is an immersive display that aims to show stories about refugees beyond the headlines in the news. It showcases a number of different stories about children in countries that are facing conflict.

Garcia referred to the display saying its “almost like Harry Potter come to life.”

He said that World Vision wanted to “show the true news behind the fake headlines, which is what inspired our augmented reality piece.”

“A lot of headlines when speaking about countries with conflict often focus on the terrorism or war, or they focus on fear. What we want to do is uncover the stories about the people that are living there.” 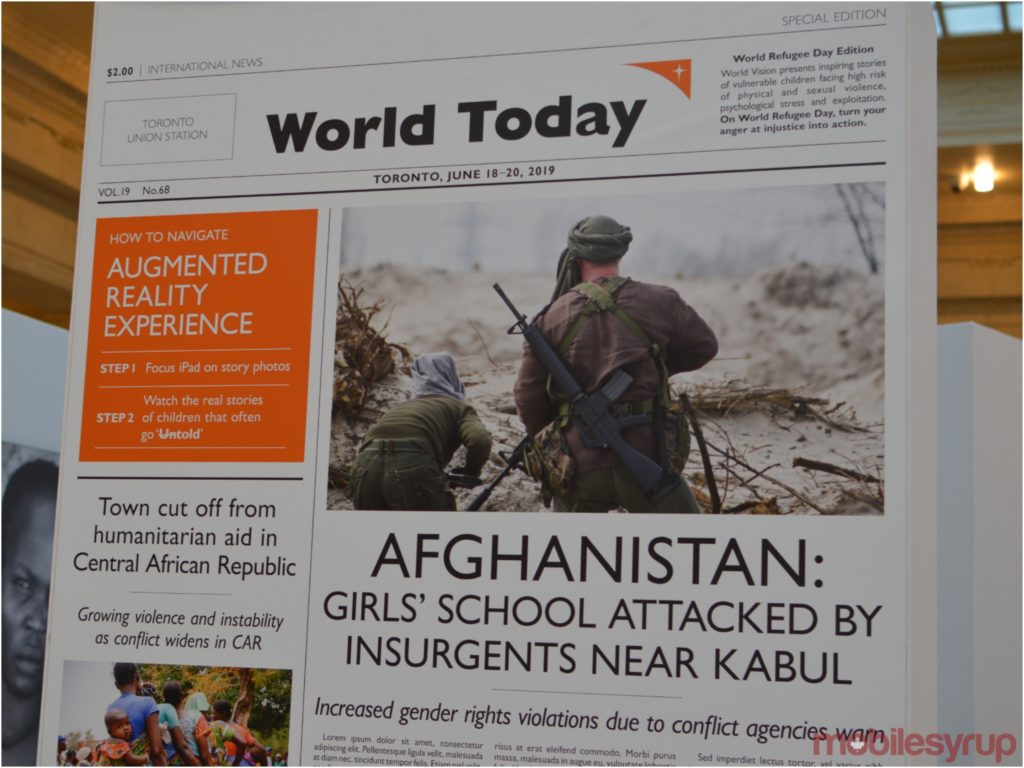 A World Vision employee held up an iPad in front of the display, which prompted the iPad to play a video of a young boy in Central African Republic that was referred to in one of the headlines.

The video described how he was forced to join a militia. The young boy was forced to do horrific things to stay alive. Now, he’s living a much more peaceful life. World Vision believes that with the right support, a child soldier can reclaim the life that was ripped away from them.

Seeing his story come to life through the augmented reality display made his story effective and captivating.

The VR experience installation is meant to display what can happen once children are able to flee countries facing conflict.

“The use of virtual reality and 360 video allows us to take the user into a fragile state, and to see the actual interventions World Vision does,” Garcia explained.

The VR experience takes viewers inside a ‘Child-Friendly Space,’ which is a safe space for children who have been displaced from their homes.

Garcia explained that “when a child that has been in a country that has been dealing with conflict and civil unrest gets out, World Vision helps them by putting them in a space with other kids.” 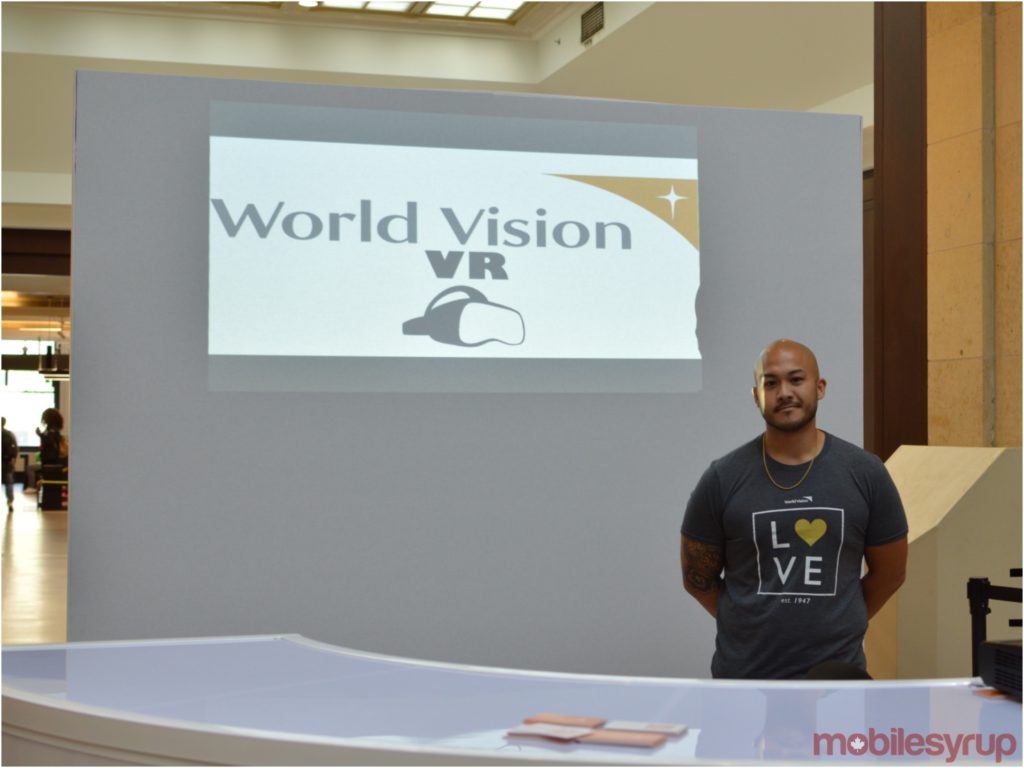 In the VR experience, I made my way through a ‘Child-Friendly Space’ in Lebanon. It was captivating to see Syrian refugees sing and learn, and as Garcia mentioned, get their childhood back.

At one point, a child looks straight at you with piercing eyes that capture the viewer. The child-friendly space is filled with colour and helps you understand what can happen once refugee children are given the proper aid.

This experience took the stories of refugee children beyond the standard videos we see. As you walk through the virtual space, you see children who despite going through severe trauma, are working to regain control of their lives.

Garcia explained that the experience is about “humanizing them, so they’re not just videos, they’re just like us and have real stories.”

Another part of the installation is a collaboration between World Vision and Game of Thrones’ actor, Liam Cunningham, who played Ser Davos Seaworth.

As an avid supporter of the organization, Cunningham travelled with World Vision to Sudan in 2018. 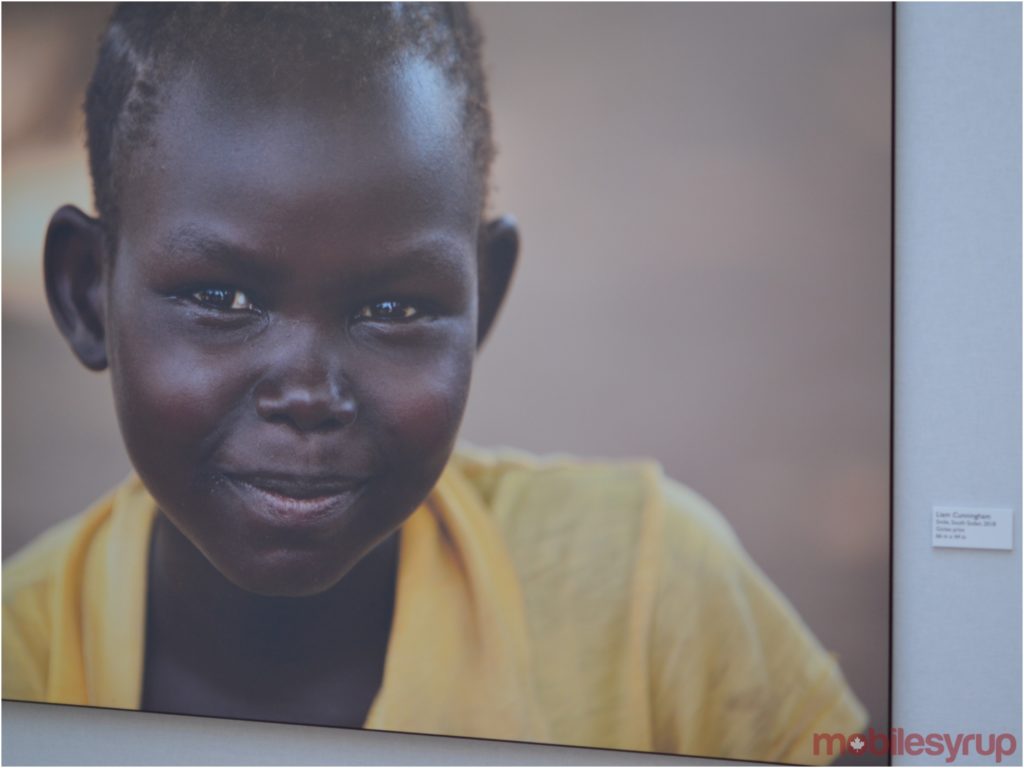 He took photos of the people he met to show a different side of them than what is portrayed in the media. He didn’t want to showcase them as desperate and instead wanted to display real people with actual stories.

He focused on showcasing happy scenes and smiles to depict daily life in Sudan. Cunningham hoped to capture a glimpse of life for those surviving far away from their homes.

Melanie Gallant, head of communications at the office of the United Nations High Commissioner for Refugees in Canada, told MobileSyrup that technology can be useful when raising awareness for refugees.

“The great thing about virtual reality is that it really enables the person to be transported to a situation and to really understand the difficulties, the environment, the challenges, the risks that people who are displaced from their homes are facing in different settings,” Gallant said.

Although the news these days is filled with tragic stories, Garcia wants Canadians to remember that there are people making a difference.

“Even though it feels like there is a lack of response to these situations, there are organizations that are doing something about it, and I encourage people to seek them out,” Garcia said.