For Mercedes-Benz, a new infotainment system is one of the key differentiators when compared to its competitors. Does it really stand out enough for millennials to take notice?

That demographic is one of the automaker’s primary targets, which is why the A-Class line has been the first to get the MBUX system. It’s a departure from much of what Mercedes-Benz did before, and is, at the very least, a serious attempt to try and offer something broad. 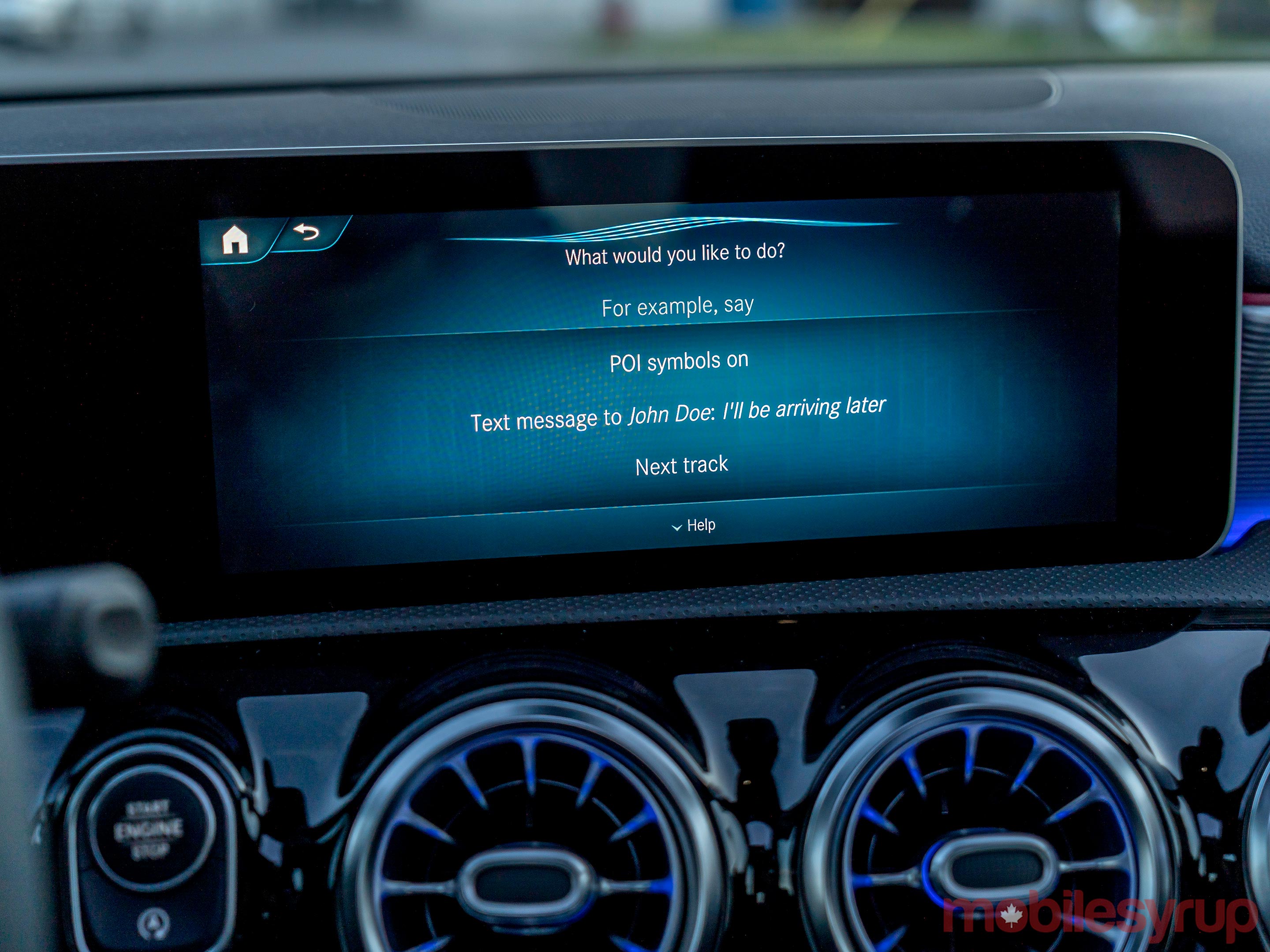 I’m going to try and avoid rehashing what I previously covered, but there will be some overlap. From the outset, MBUX has been designed to be deep, yet also interactive. The twin 10.25-inch displays — one as the digital cluster in front of the steering wheel, the other the primary infotainment screen — are vibrant and modern.

Bear in mind, however, that a 7-inch display is the standard. To go bigger, you need the Premium Package that costs an extra $2,950 at the dealership. That package brings in the dual screens, Linguatronic voice control, CarPlay, Android Auto, wireless charging, NFC and LED ambient lighting.

That’s not to be confused with the $1,600 Technology Package, which gives you multibeam LED headlamps, adaptive highbeam assist and active distance assist. In other words, those are extras that aren’t really part of the infotainment array. 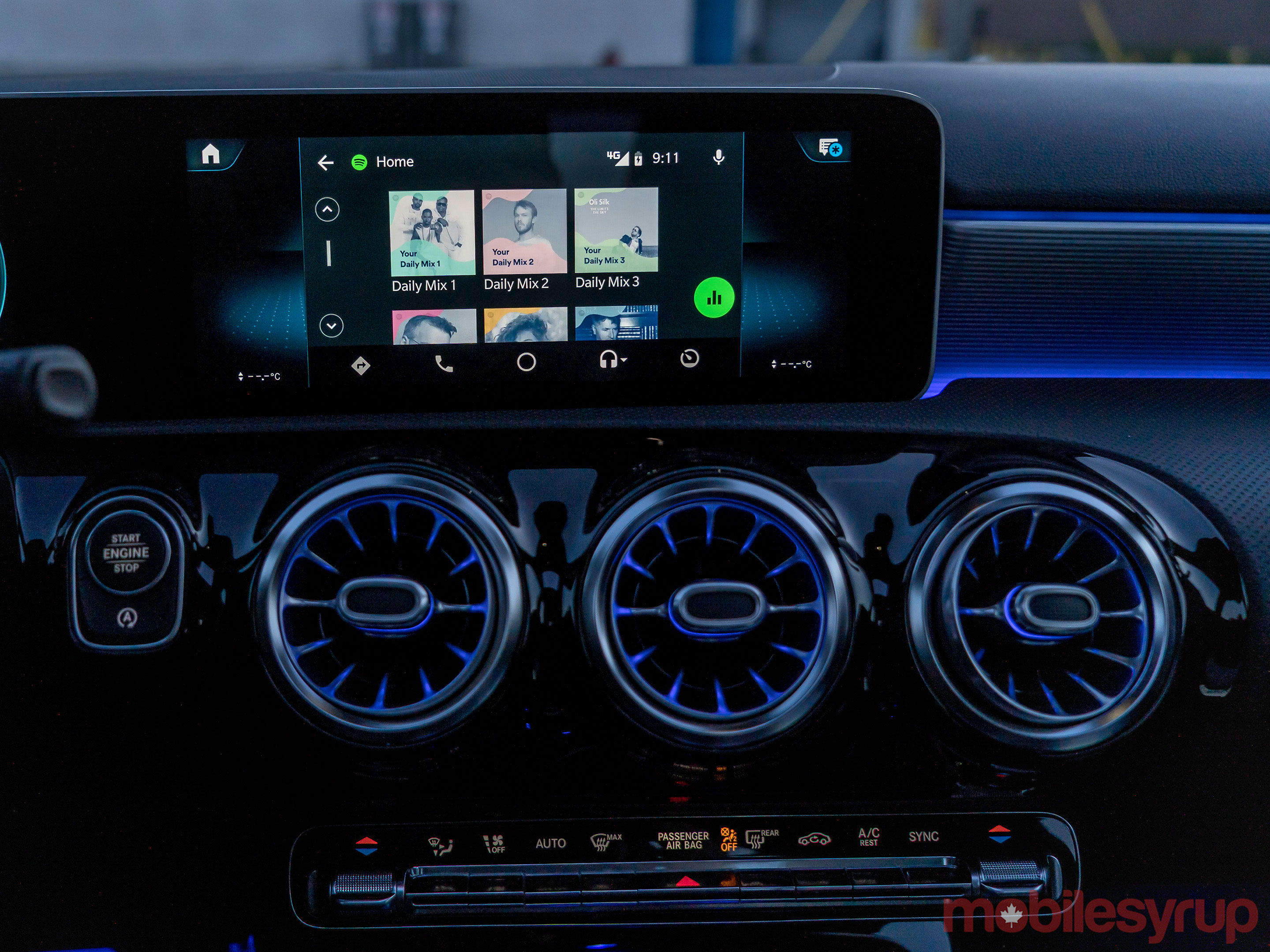 MBUX relies heavily on the cloud, particularly with the Linguatronic voice platform. This isn’t a typical in-car voice stored in the car, but rather one that pulls down information through the in-car SIM. Engineers designed it to be ‘natural’ in that it understands language the way people actually talk.

As I noted when I first saw it, Mercedes felt it was to be along the same lines as Alexa, Google Assistant and Siri. I’ll touch on that later.

The Navigation Package not only gives you satellite-based maps, but also augmented reality (AR) and live traffic assistance. Having that package extends the functionality via the Mercedes me app on iOS and Android too. The first three years of all those app-based connected services come free, with a subscription to follow after that. 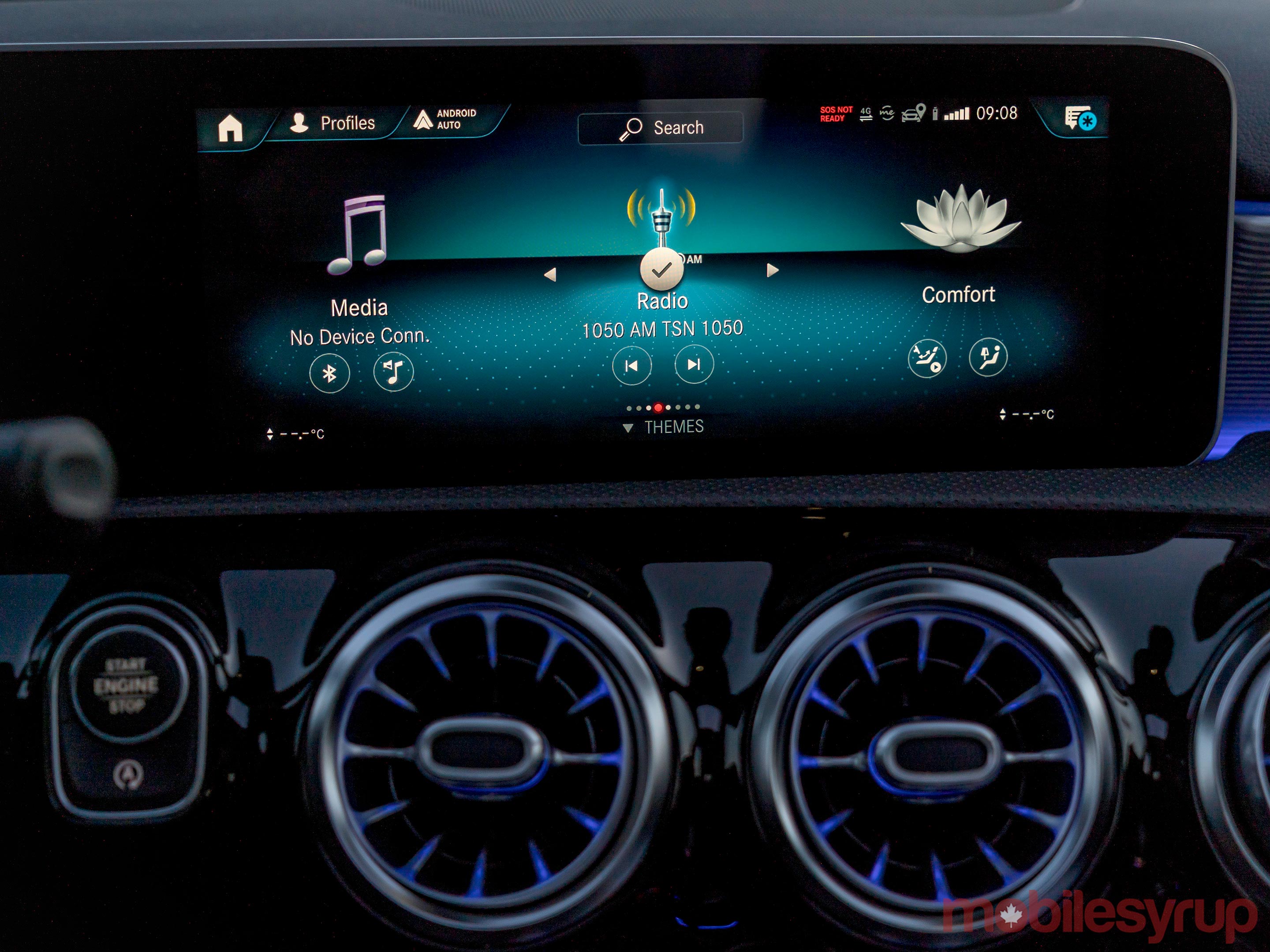 The steering wheel offers some limited controls, but the real inputs are on the touchscreen itself, and the touchpad in the centre console. The latter is a hybrid of a trackpad with haptic feedback and mouse with multiple buttons.

It’s fairly smooth, except it carries a learning a curve in knowing how touch and press actually work. For example, scrolling across the menu is like swiping side to side, albeit with haptic feedback with each move onscreen. Pressing makes the selection, though there are dedicated buttons at the top for navigating tracks, going back or returning to the home screen.

Unfortunately, the trackpad’s integration with CarPlay and Android Auto isn’t what you might expect. Other infotainment systems integrate the physical input method into both platforms, although to be fair, some of those don’t have touchscreens. 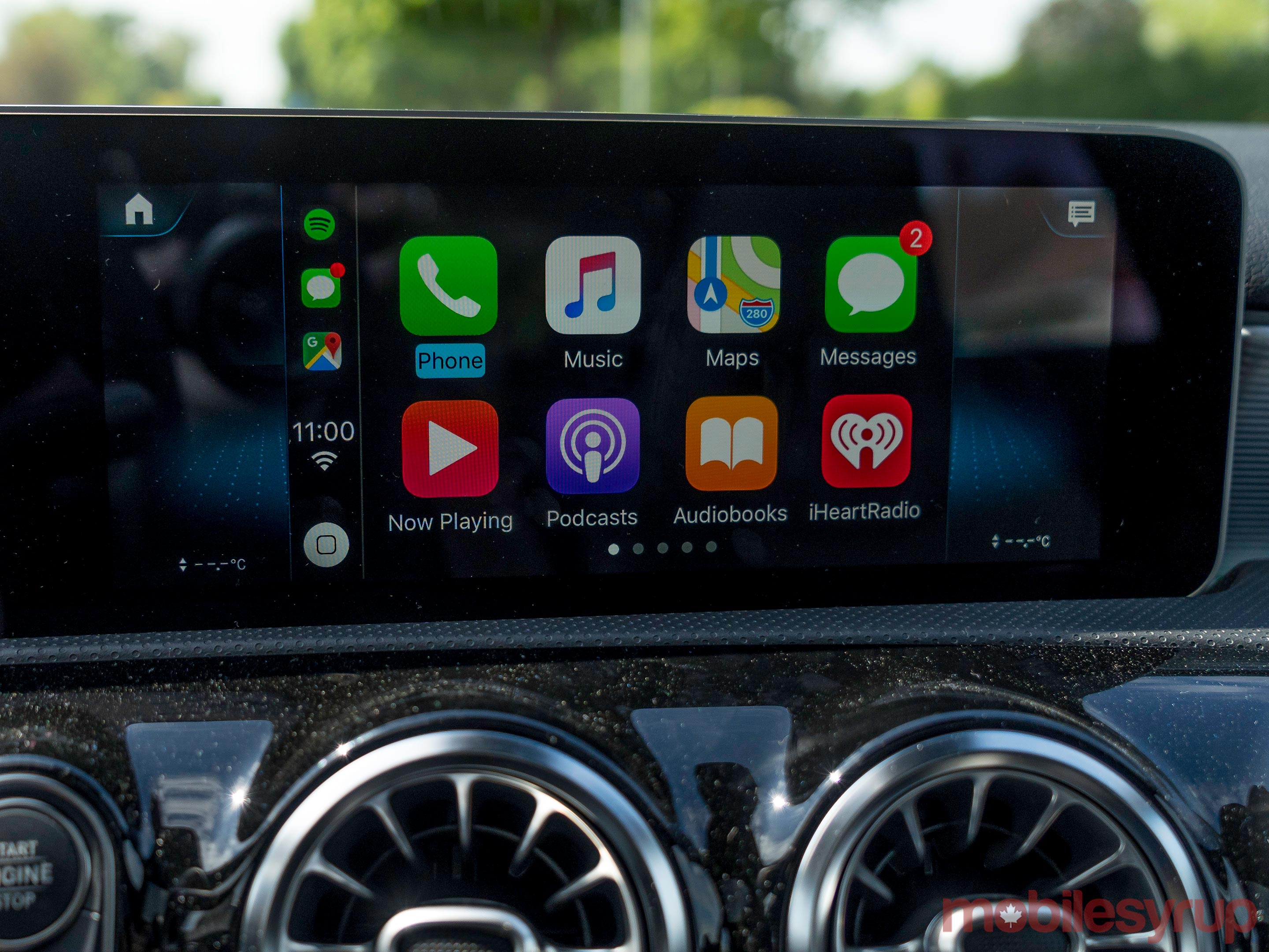 Still, forcing drivers to use the touchscreen at all times, especially for Android Auto, which has virtually no integration with the trackpad, is odd for a vehicle from a German automaker. I asked whether it was incumbent on Mercedes or Google to figure that out, but never got confirmation one way or another.

Not only that, but CarPlay and Android Auto also don’t take up the screen’s full aspect ratio. I asked Mercedes why, and a spokesperson told me that it was to present more of a ‘symbiosis’ between MBUX and either platform. This way, the MBUX home button is always visible, and the notification shade can drop down from the top of the screen.

One good thing that I found useful was in how the system handles calls and text messages. Calls are easy, including both making and receiving. You can respond to texts using canned responses from the screen or verbally recite what you want to say. 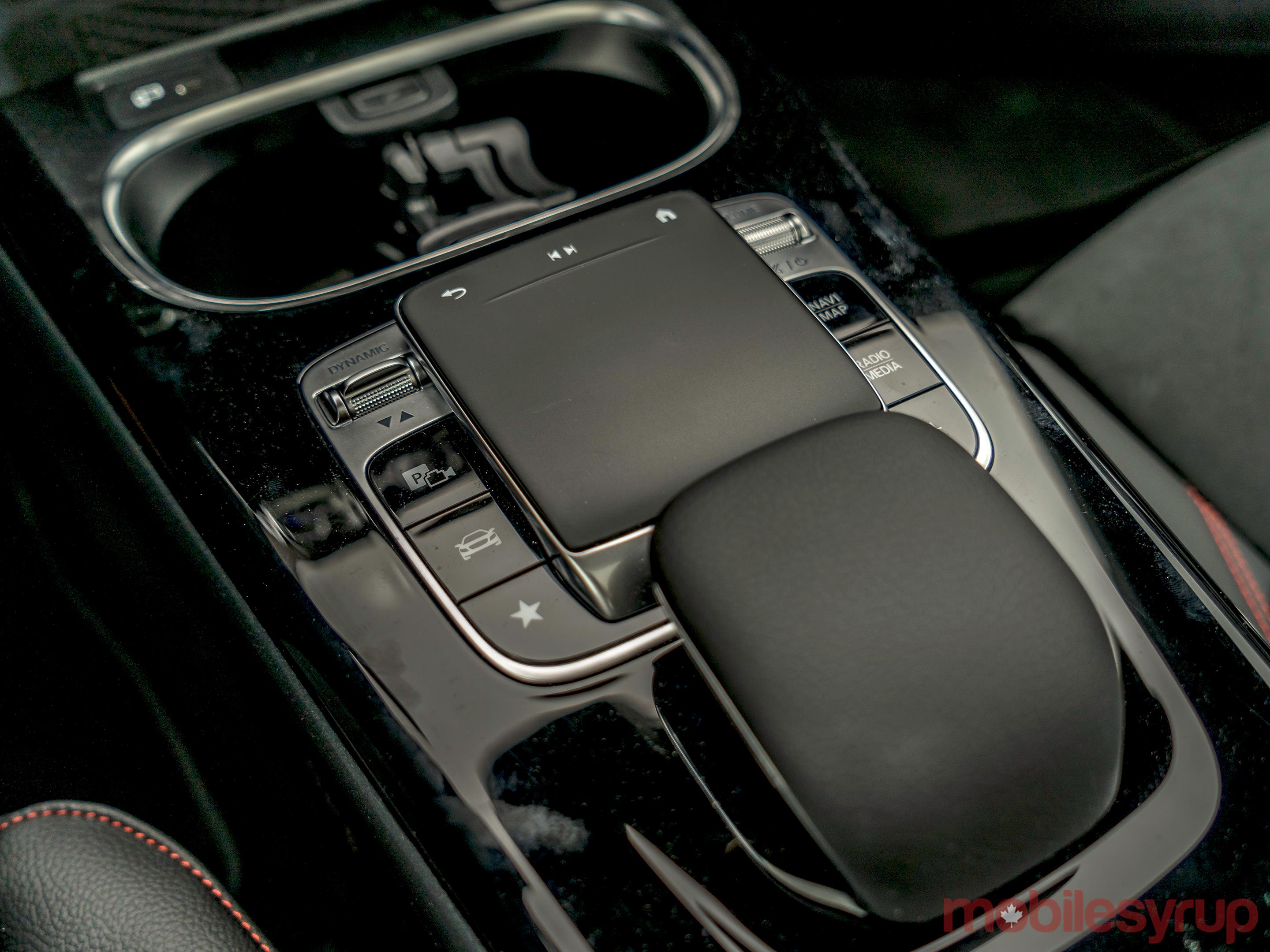 As MBUX rolls out to other lines, like the E and D-Class, for instance, there may some variances on connectivity, but the foundation will be pretty standard throughout from the looks of it.

My A-Class Hatch tester had three USB-C ports, forcing me to use USB-A adapters to bridge the gap. Some might find that kind of exclusivity off-putting, but USB-C is fast becoming ubiquitous for devices. As long as you have the proper cable, you should be good. For me, I had to make sure to keep a couple of adapters inside just in case a passenger needed to charge too.

Mercedes also abandoned the Aux-In port going back to 2015 model year vehicles, so that’s been long gone. You do still get a 12-volt socket as an additional charging option though. For audio playback, however, it’s either USB-C or Bluetooth.

The in-car Wi-Fi hotspot comes with only 1GB for a trial run, and then costs an extra $15GB after that. From there, it’s $35 for 4GB per month, $70/10GB and $200/20GB for the year. None of these require any kind of contract, but as with any other vehicle, you can’t add it to an existing data plan because AT&T is the provider in this case. If there is an advantage in that, it’s the lack of roaming fees or programs. Cross the border into the United States and use the data as normal.

In turn, the car itself can connect to Wi-Fi hotspots where available, though I don’t know how useful that would be in most cases. System updates are free via the cloud and in-car SIM. But if you’re close enough and wanted to supplement your phone’s data, that’s one way you could do it. 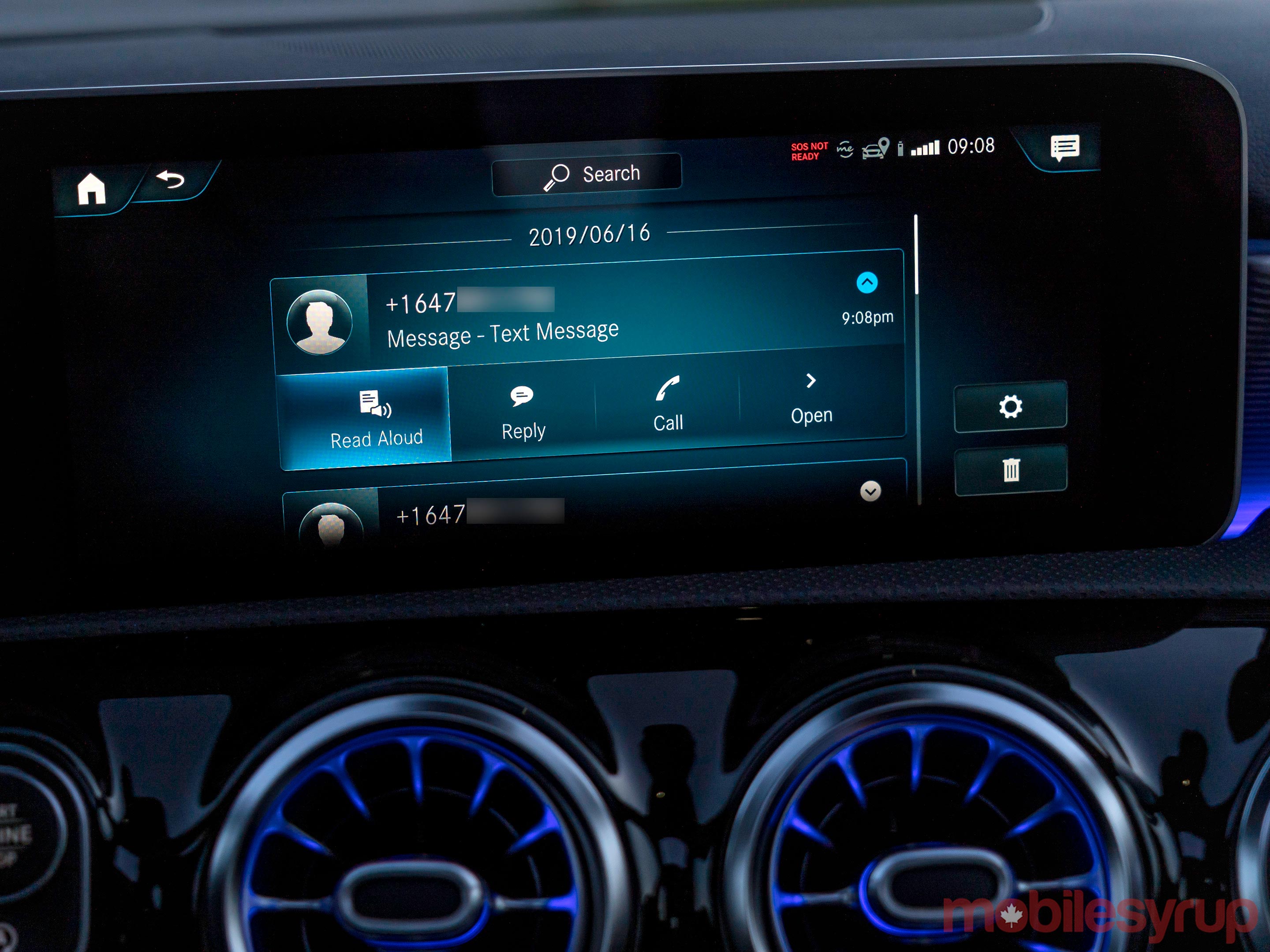 The biggest recipient of all things cloud in MBUX is the voice platform. It’s tied to Mercedes me services as part of the free three-year window and is designed to get better over time.

There is an onboard portion stored in the vehicle, but it’s really basic. The real meat to these bones is in the cloud-based portion. With “Hi Mercedes” or “Hey Mercedes” salutations, the platform is supposed to be able to engage and answer a lot of different questions. Add in-vehicle controls and commands, and you should have something pretty dynamic in the cockpit.

Results were mixed during my testing. For example, it was quite good at controlling certain vehicle functions, like changing ambient lighting, turning on air conditioning and telling it which radio station to play. It was also fairly adept at finding points of interest, talking about the weather and even answering general questions. I tried questions that I would typically ask Alexa or Google Assistant, and it did okay.

Except it’s more sensitive to how you ask. Context sometimes also removes access to content. When I asked about scores and upcoming games for the FIFA Women’s World Cup, it seemingly had no idea what I was talking about. Every request came back with, “How can I help you?”

Another minor gripe is, for something so conversational, some natural language is missing. When I asked about the last Toronto Raptors game, it nicely noted that the 114-110 win over the Warriors also won them the NBA Championship. But in reciting the score, it literally said, “One hundred and fourteen to one hundred and ten.” No one talks like that, nor should a machine waste time with unnecessary filler. It should have been “One-fourteen to one-ten.”

Google, Amazon and Apple have all worked on making their respective voice assistants sound a little more human, and that’s sorely needed here too, in my opinion. It’s too monotone, and the focus on phonetic pronunciation actually adds up to wasted time at a macro level.

The backend for all this voice stuff comes from SoundHound, specifically its Houndify AI platform. Being cloud-based means it’s supposed to be better over time. It certainly is better than when I first saw it in pre-production last year, but with automakers already keen on bringing in Alexa into their vehicles, I do wonder how long Mercedes will want to keep this going. 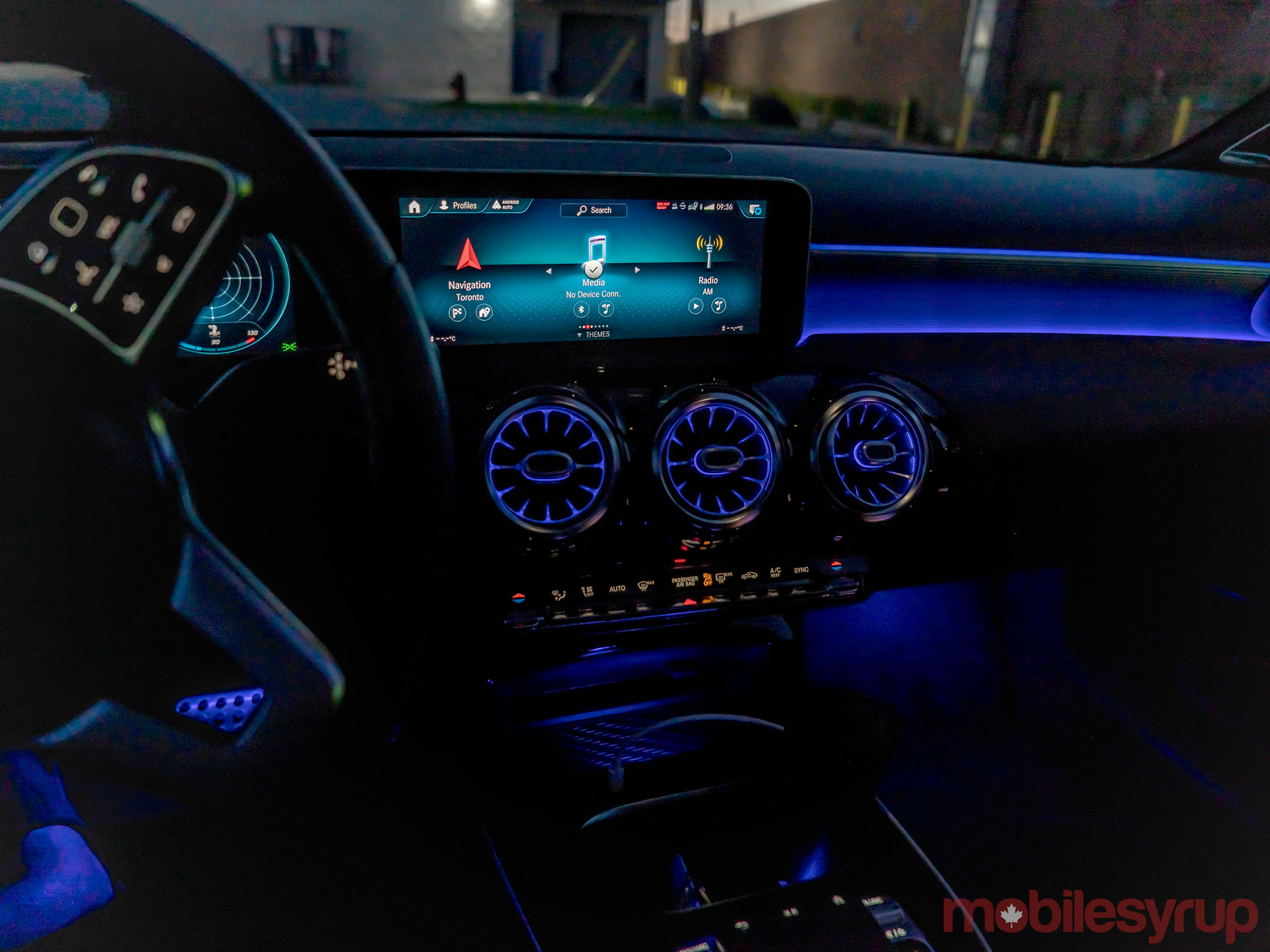 Technical issues negated me from testing out the Mercedes me app, which offers remote start, lock/unlock, vehicle diagnostics, tracking and 24/7 concierge, among other things. There’s also direct integration both in the vehicle and remotely, making for an interesting suite of services.

I’ll be testing these in a future test drive, so look for an update to this review sometime soon.

Mercedes dubbed this system as being 'revolutionary' when first unveiling it, but that’s not exactly how I would put it. Aesthetically and functionally, there’s no doubt it’s one of the better systems I’ve seen in a car to date. I just never felt I was using something that came from the future, if that makes sense.

The voice platform is ambitious, to say the least, though I do wonder about its longevity with Alexa lurking around the whole auto industry. The good news is that it did improve from when I first used it, but Mercedes will have to make it better at a faster pace just to keep up with how much better Alexa and Google Assistant can be. The key advantage in the cabin right now is this voice platform also controls various aspects of the car.

The real challenge will be updating all of MBUX to feel fresh two or three years from now. No automaker has been able to truly do that, so it will be interesting to see what this looks like down the line.