Can't wait to use the ZenFone 6 as my daily driver

I finally got my hands on Asus’ ZenFone 6 and I’m ecstatic.

Asus announced the ZenFone 6 back in May, but the device didn’t officially launch in Canada until the end of August. However, due to limited units, the phone is nearly impossible to actually buy here. Asus says more stock should arrive by early November. As always, MobileSyrup will keep tabs on when the ZenFone 6 becomes more widely available.

I only spent about an hour with the Asus ZenFone 6, but I walked away impressed with the smartphone. Though Asus also showed off other laptops and even the ROG Phone II (it’s launching before the end of the year), the ZenFone 6 was by far the most interesting device in Asus’ lineup this year.

The ZenFone 6’s headlining feature is its dual rear-facing camera module that flips up to transform into a selfie camera. With two cameras that flip up, it means the phone’s bezeless display is unobstructed by a notch or cutout, similar to the OnePlus 7 Pro, and that’s incredibly alluring.

No notches, nor cutouts 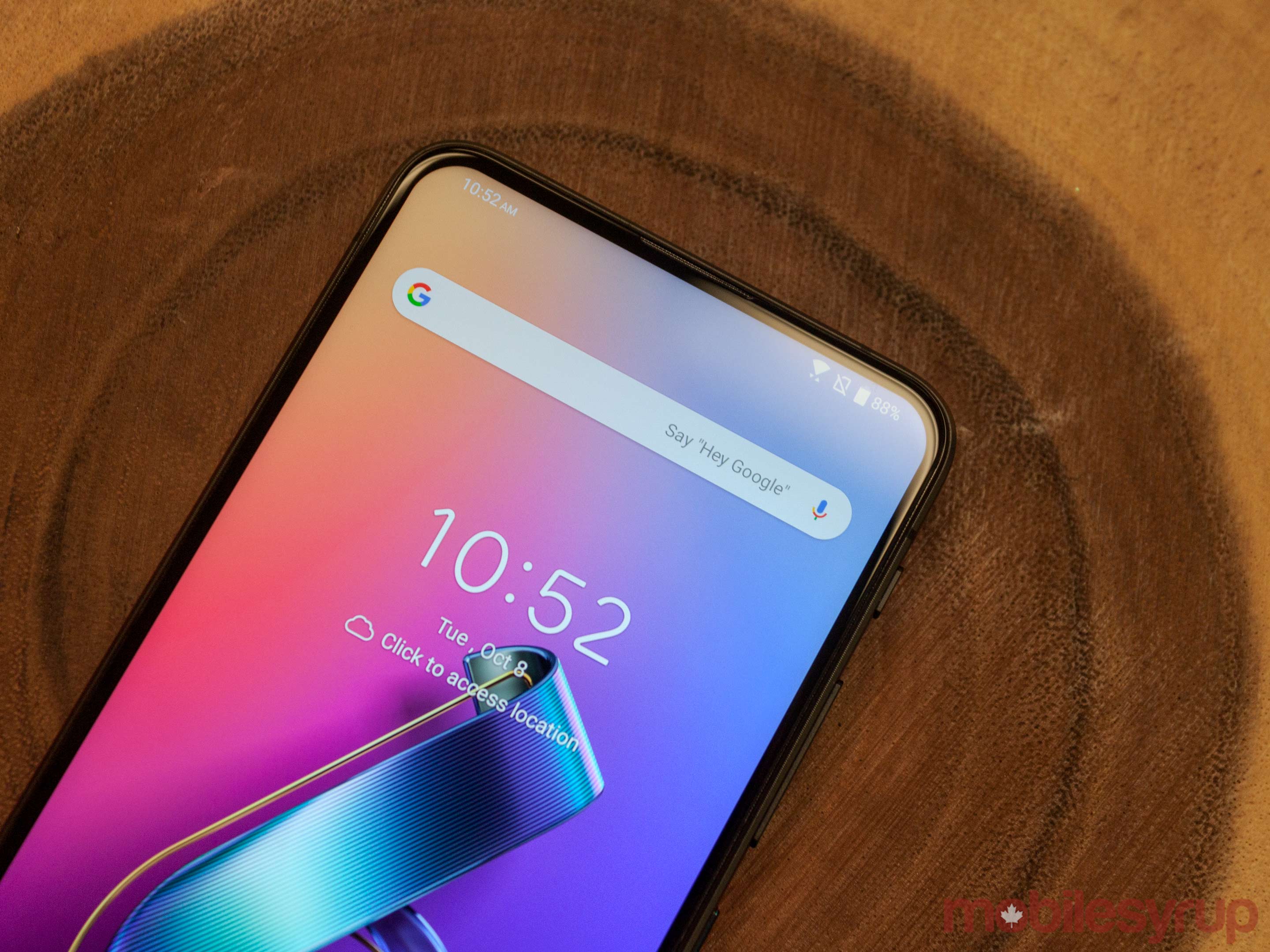 The Asus ZenFone 6 features a 6.4-inch IPS LCD display with a 1080 x 2340 pixel resolution and supports HDR10. In all honesty, it isn’t the best screen I’ve ever used. Without directly comparing them, phones like Samsung’s Galaxy Note S10+, the OnePlus 7 Pro and the iPhone 11 Pro offer better blacks and a more vibrant experience.

Nevertheless, this probably isn’t something most people would notice. Don’t get me wrong though — the ZenFone 6’s display is still quite good. I watched a clip of Rick and Morty on YouTube at 1080p resolution and thought, ‘this isn’t the best viewing experience on a smartphone, but I could watch hours of content on this screen and I wouldn’t care.’

I need to spend a lot more time with the ZenFone 6 before coming to a final conclusion regarding its display. What I can say with certainty is that looking at an unobstructed screen without bezels, a cutout or a notch, is an appealing experience. 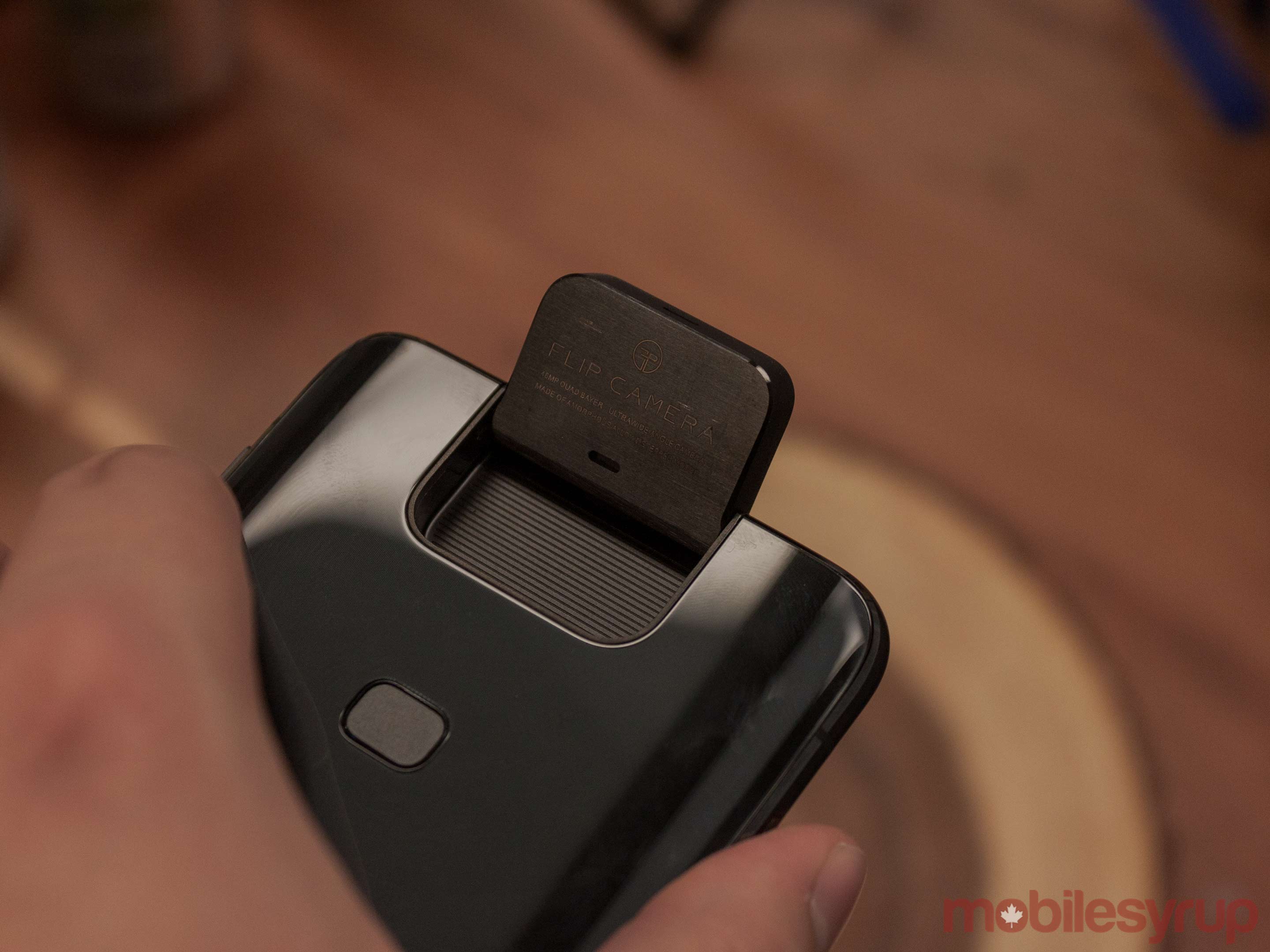 The ZenFone 6 features two rear-facing cameras, one with a 48-megapixel shooter and the other is an ultra-wide-angle lens that sports a 13-megapixel sensor.

Unfortunately, I didn’t have time to dive deep into the phone’s photography capabilities because we were in a poorly lit office. I took a couple of pictures of cookies and thought they were decent. But I’m nowhere near formulating final thoughts about the rear-facing camera experience. 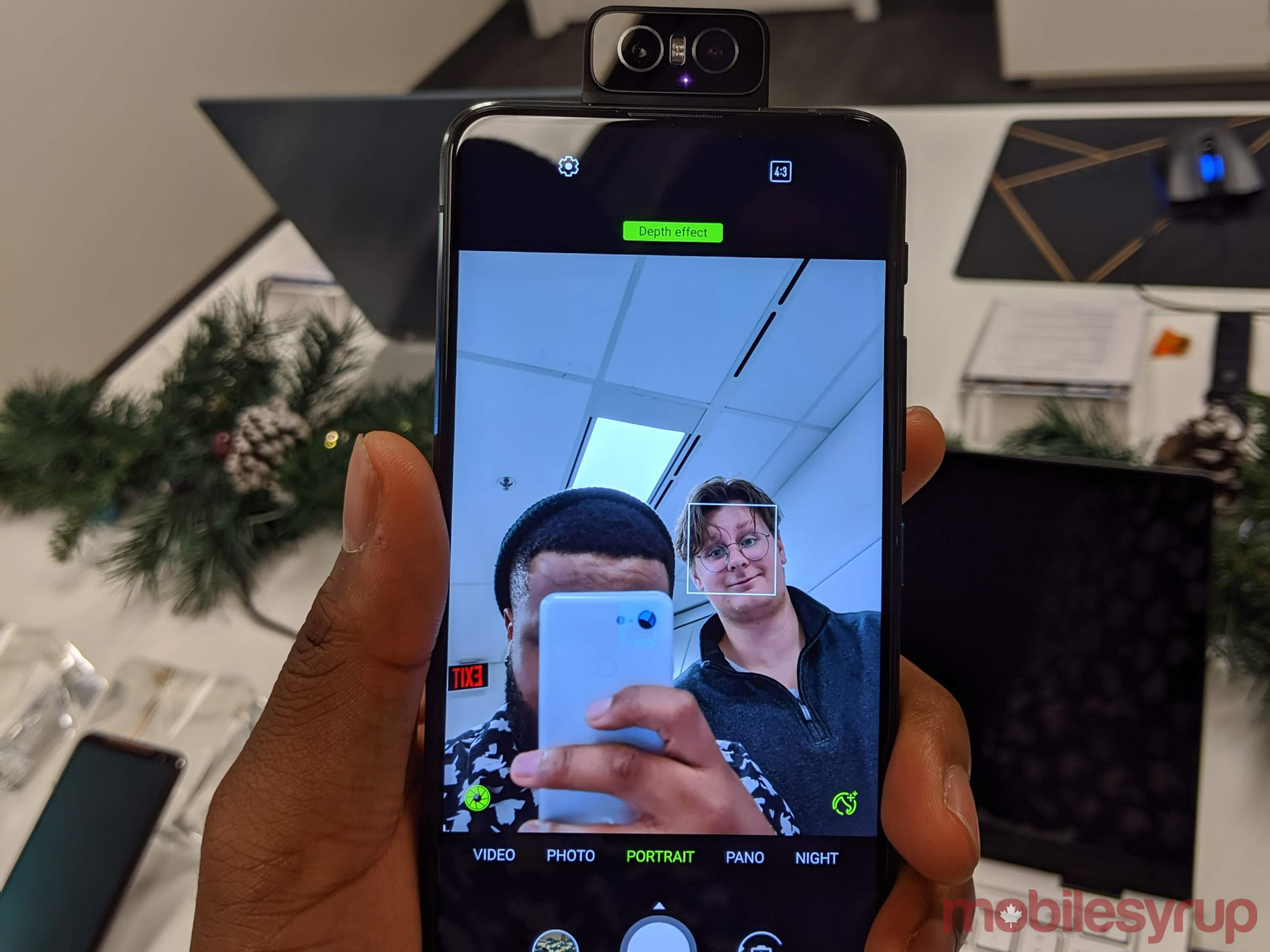 On the other hand, using the shooters as selfie cameras is a feature I loved. First, the flip motion is an absolute pleasure and is fun to watch. The mechanism also didn’t seem flimsy, and with the volume rocker, you can easily control the exact angle of the cameras.

Second, a 48-megapixel shooter to take selfies is phenomenal. Again, I didn’t play with the cameras for very long. I still need to test the camera in a variety of environments and lighting situations, but my initial impressions were positive.

My top picks for smartphones with the best selfie experience are both the iPhone XS and 11 series, as well as, the Pixel 3 series; however, that might change with the ZenFone 6. The image quality was remarkable, and I can’t wait to compare selfies with other flagship handsets directly. 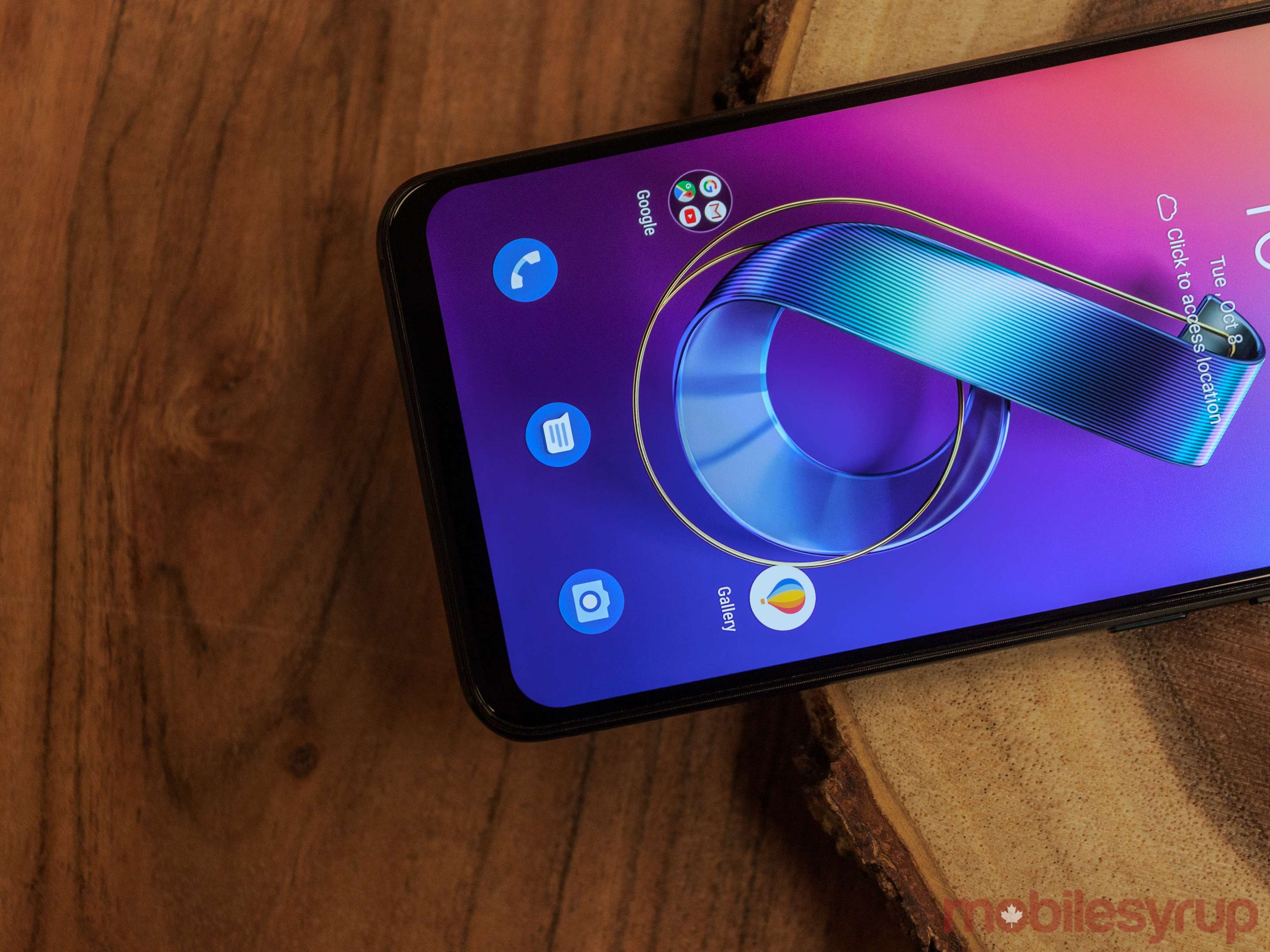 There are some things I didn’t test out during my preview with the phone. I didn’t try out the speaker quality, and I didn’t put the phone’s Snapdragon 855 chip through its paces. I also couldn’t assess the 5,000mAh battery. But something I did notice was the handset’s minimalistic Android skin.

Asus has done a lot of work to make ZenUI look more like stock Android. Though, it’s not the best; it’s a much-needed improvement.

When you open the app launcher, there’s only one page worth of apps, and they’re mostly Google’s stock apps. Out-of-the-box you’ll get Gmail, Messages, Instagram, Play Movies, YouTube, Google Pay and other essentials. Asus didn’t double up on apps, except for Gallery. Asus added its Gallery app and Google’s Photos, for some reason. The Taiwanese company did decide to add a few of its own apps, but there were less than five. The company also tried to fill in the blanks left by Google by adding its own Sound Recorder and Weather apps.

It also has a system-wide dark mode, but I didn’t turn this on because I hate dark mode.

The ZenFone 6 also includes the option for Android 9 Pie’s two-button gesture navigation, also known as ‘the pill.’  Asus created its own gestures that get rid of on-screen buttons, and you have to slide your finger on the bottom perimeter of the display to perform actions. This took a little time to get used to, but after less than an hour with the device, it already started to feel more natural.

There’s also a Google Assistant key on the right side of the device above the volume rocker and power button. You can set this button to perform different actions, but unfortunately, you can’t have it open any app on your device. By default, if you press it once it summons Assistant. Twice activates Assistant and opens the Assistant page. You can also press, hold, speak and then release the button and Assistant will respond, like a walkie talkie. 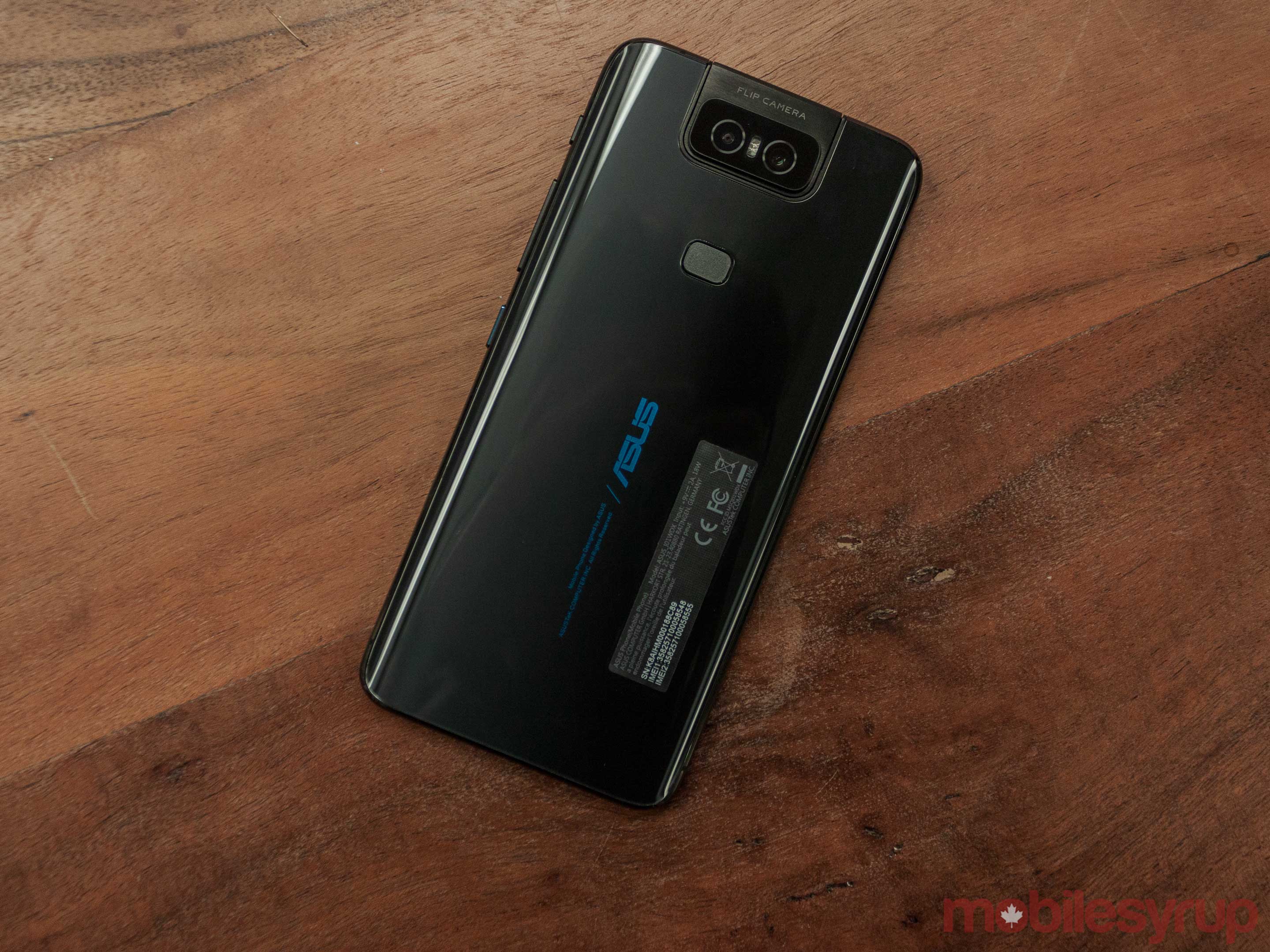 My first impressions of the ZenFone 6 are resoundingly positive. I wish I could have spent a lot more time with the device, and I can’t wait to use it as my daily driver. I was mesmerized by the notchless, bezeless display and I can’t wait to become a true selfie king.

While the ZenFone 6 lacks features like an on-screen fingerprint scanner and the best display, these shortcomings likely helped keep the phone’s cost under $1,000 CAD.