Acer Chromebook Spin 11 Review: If only it was cheaper

If this Chromebook cost about $100 less, it would be the best value ever

Chromebooks are perfect for a lot of people, but since they can’t do as much as a Mac or Windows PC, they should almost always cost considerably less.

The Chromebook Spin 11 from Acer costs less than a PC at $400 CAD, but that’s still a little much for what this machine is capable of.

That’s not to say I wasn’t happy with the device’s performance or hardware. I have no real qualms, but it just feels more like a $250-300 product rather than one that costs around $400.

The little Chromebook that could 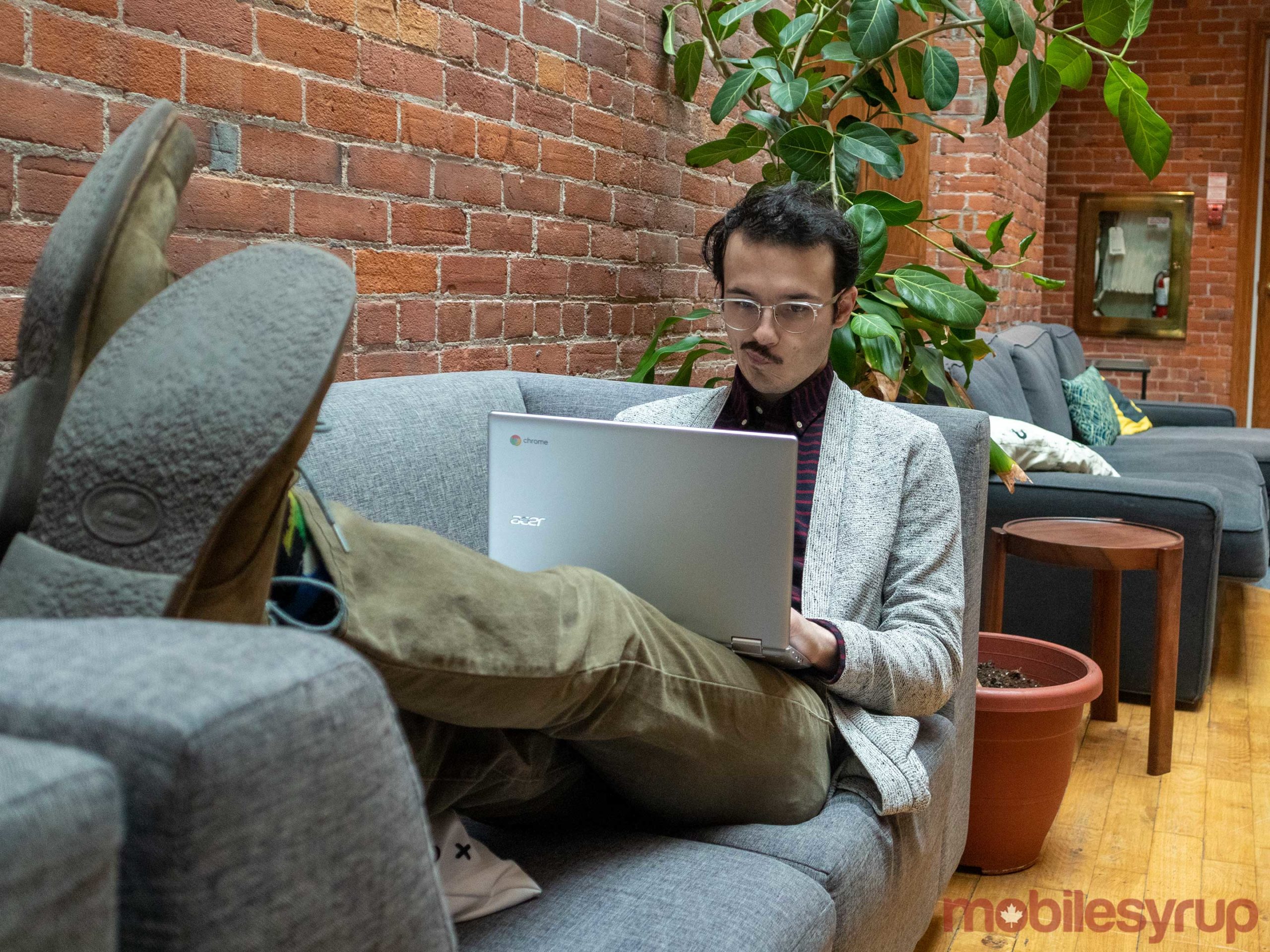 The Spin 11 features an 11-inch screen, which would be ok if it didn’t have massive bezels around it. Since the screen is so small, it also forces you to move your dock to one of the sides to maximize vertical space.

That said, you do get used to the chunky bezels after a while. The screen also folds all the way around so it can be used more like a touch screen tablet.

Inside it’s packing 4GB of RAM and a 2.6GHz Intel Celeron processor. While this doesn’t seem like a lot, I was able to have two windows open with a few tabs each and it continued to run smoothly. 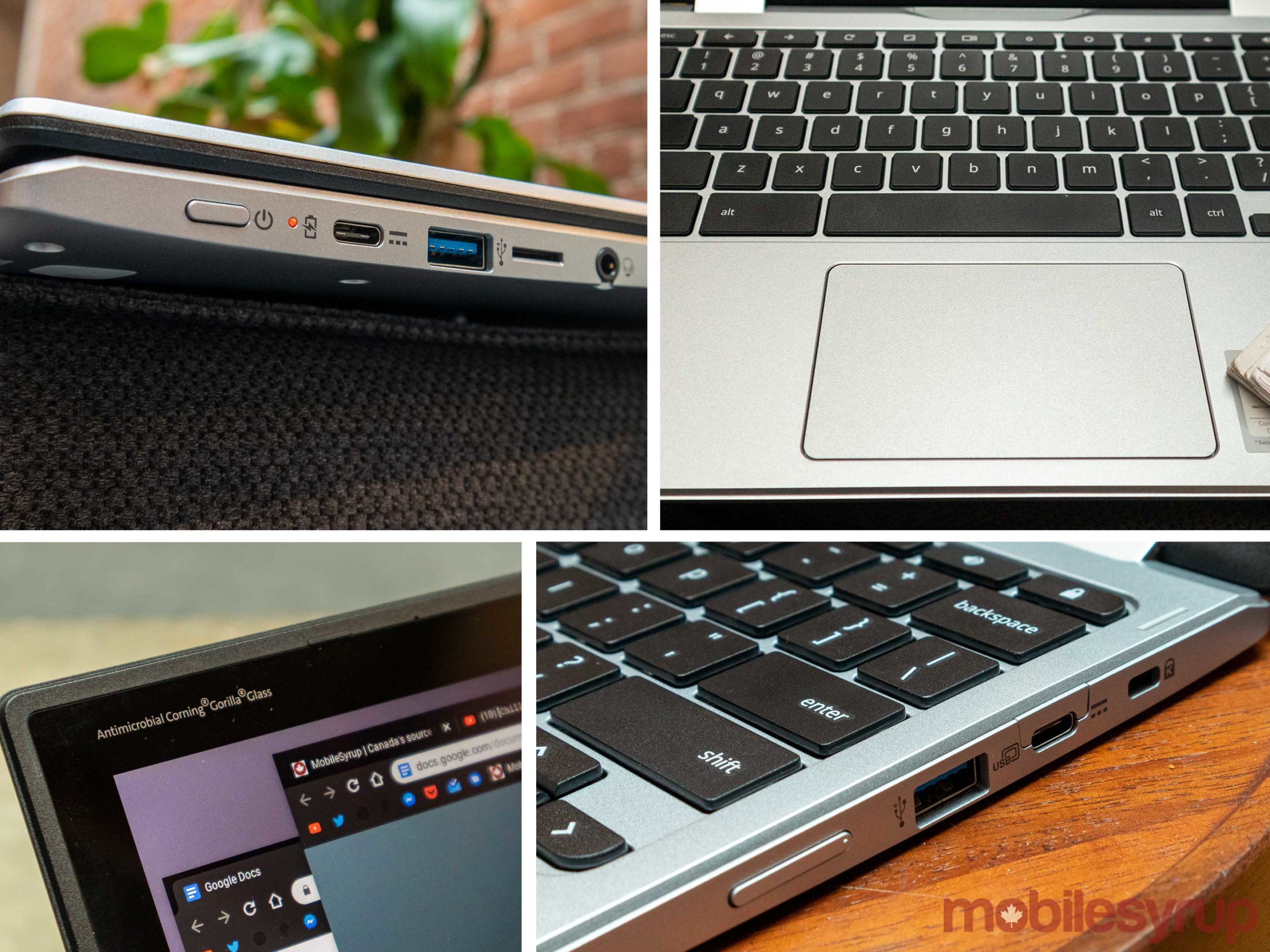 The part of the Chromebook that surprised me the most was the keyboard and trackpad. For such a tiny machine, I expected the trackpad to be terrible, but it was actually super responsive and it was large enough that I never got frustrated with it. Unlike the Asus Chromebook Flip, I felt like I could switch between the Spin’s trackpad and my Macbook’s without issue.

The keyboard feels really nice. Some people might find it mushy, but I like the key travel and its overall size. Honestly, I’d rather write long-form features on this keyboard than my Mac.

Another thing worth mentioning is that the battery life when you keep the Chromebook’s screen brightness around 75 percent or less is quite superb. 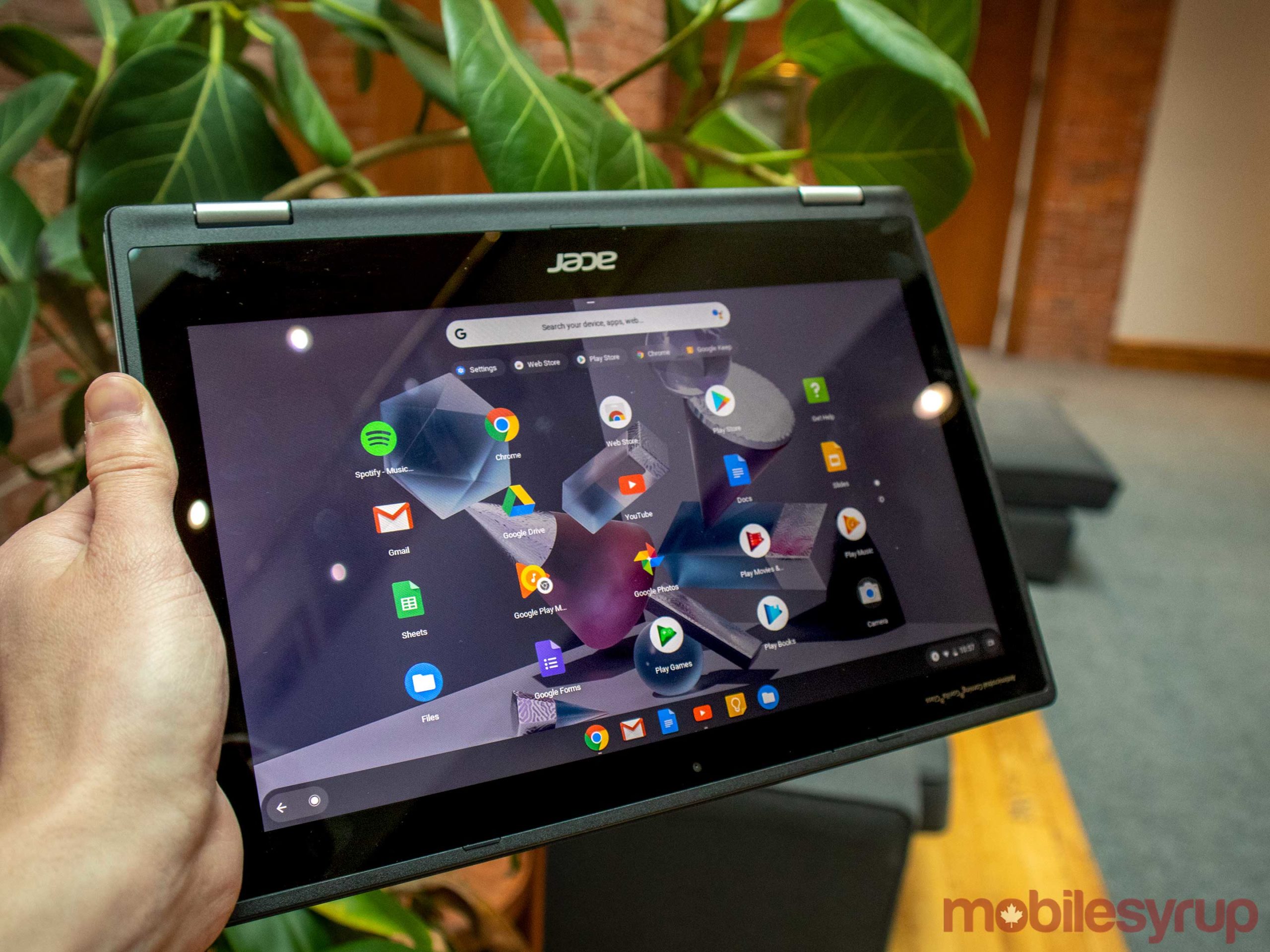 For starters, the overall build quality feels very cheap. It’s all silver plastic with black plastic accents. When in use it feels nice, but there is some flex in the plastic and the keys aren’t in a perfect line.

Not to mention the tiny screen and huge bezels are an annoying eyesore. Acer could have easily stuck a 12-inch or larger screen in this machine and it would have made a huge difference.

To be clear, these imperfections are not make-or-break, but they make the Spin 311 look and feel cheaper than it is. For example, typing feels good, and using the hinge feels solid, but the hardware design screams, “I’m a low-cost machine.”

There’s even a weird indent above the keyboard that serves no purpose, but for some reason is covered with a sheet of clear plastic. 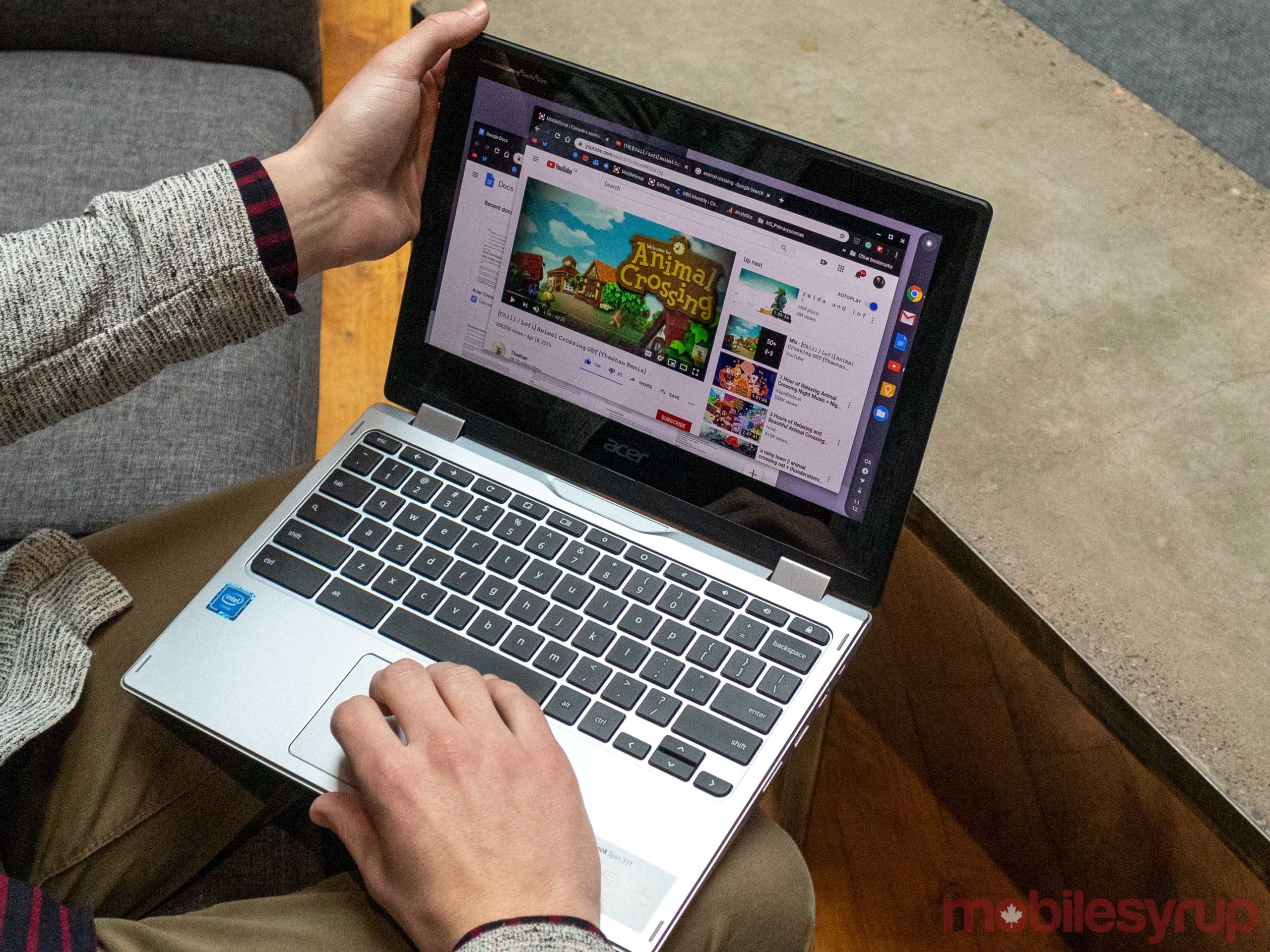 It’s also running Chrome OS, so be wary about what you want it to do. Think of it more like a great typing machine for word processing and browsing the web and not as a full computer for intensive creative work.

While I like Chrome OS, I wish it was better. The limited Chrome OS-specific app ecosystem makes it a no go for a lot of people. Sure, you can run Linux and Android apps, but overall you need to be sure that what you want this machine to accomplish can all be done on the web.

Two examples of this are Slack and Spotify. They both have apps on Chrome OS, but they’re Android apps and aren’t great compared to the versions of those apps on Mac and Windows. You can replace these with websites, but that just means opening more tabs. 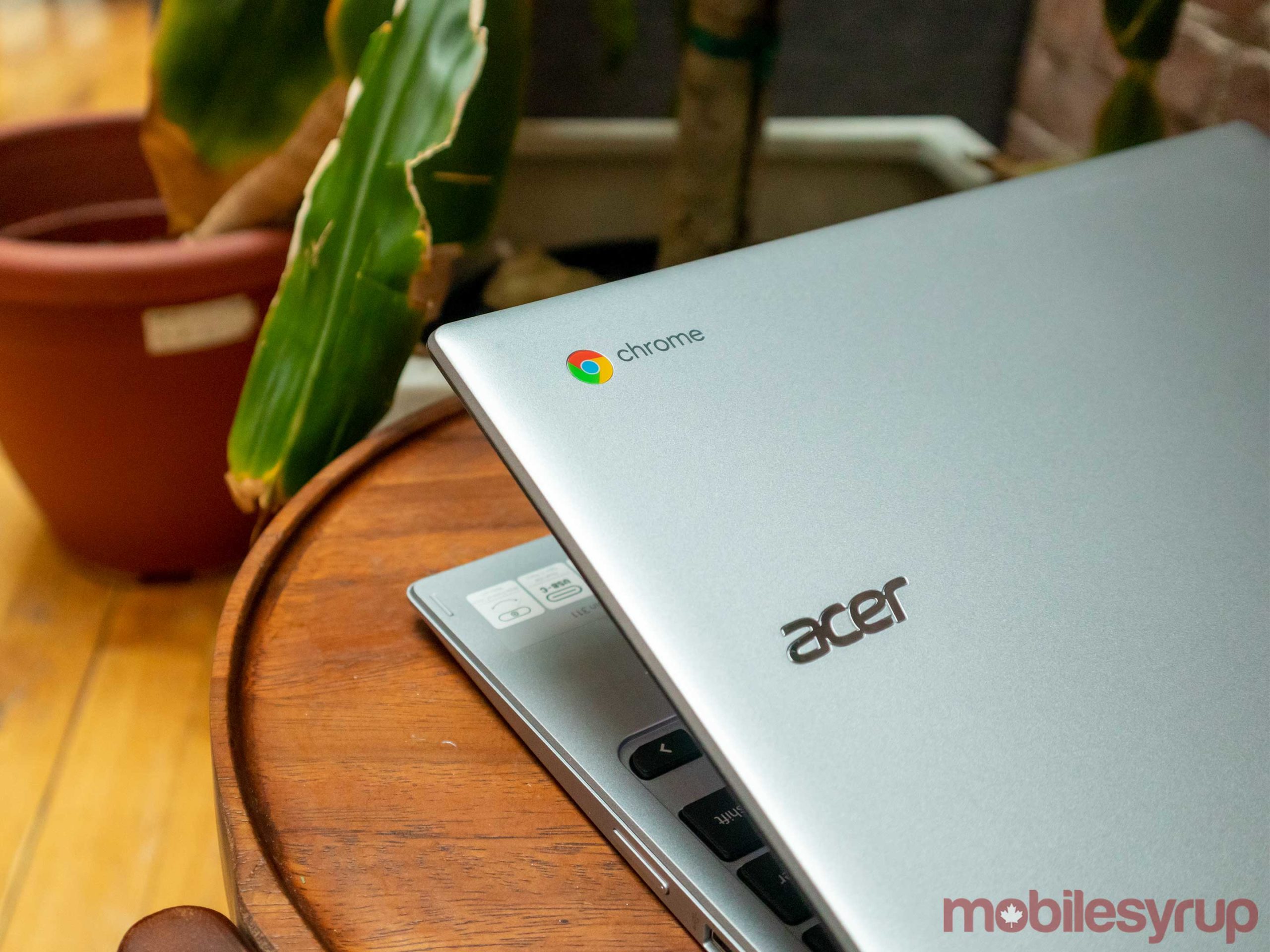 Who is this device for?

It’s pretty clear that Acer built this Chromebook for students. It’s small and easy to carry around, it has a great typing experience and as an added bonus, you can flip the screen around and watch YouTube and Netflix super conveniently.

Since it’s a Chromebook, it excels at these tasks.

If you’re a working professional or in a computer heavy post-secondary course, you’re likely better off with Windows or Mac, but if you just need a tiny device to send some emails, type some word documents, catch up on social media and watch YouTube, this Chromebook is great.

That said I still think it should be a bit cheaper. Acer sells it for $400 at Best Buy, which makes it about as expensive as an iPad with a case or a smart cover.

When I was in high school, I was able to get everything I needed to get done on an iPad and I think with the iOS enhancements made since then, that option has become even better.

Having said all of that, weigh what you want from a lost cost computing device and if a keyboard and USB-C ports are necessary for you and you don’t want to spend a ton of money this isn’t a terrible option. Plus it's tiny size does make it ultra-portable.