I’ve always primarily worked on a laptop and played console games on a television.

While I’ve used a secondary monitor at work for several years, I’ve never really paid much attention to its features. What’s the display refresh rate? What colour type does it support? Does it have HDR? These are all questions that never crossed my mind. In this new era where many of us are working from home and not going out very often for the next few months, the home office monitor I use for work and playing video games is suddenly way more important. 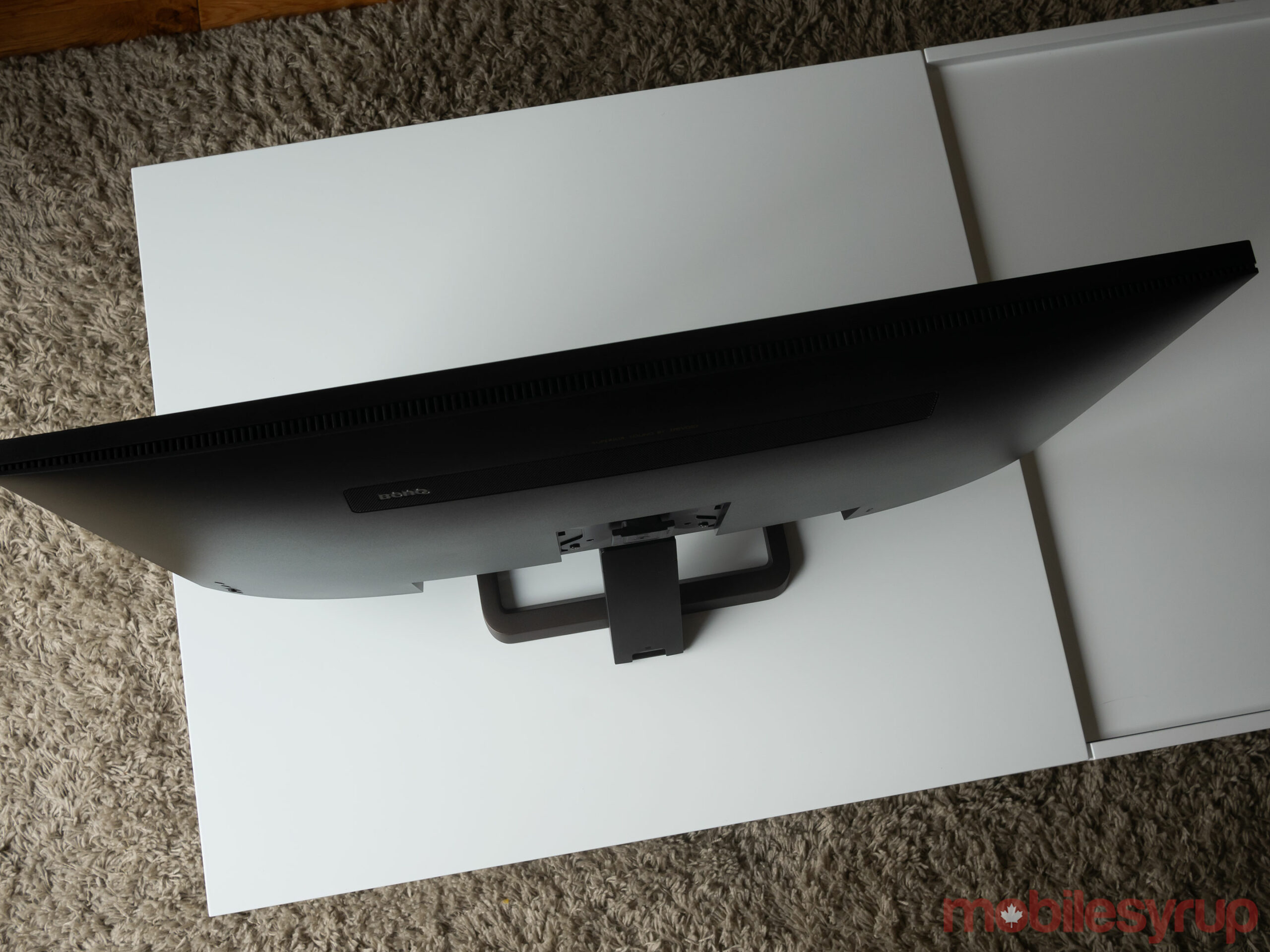 Right off the top, this display isn’t worth your time if you’re after a monitor featuring a 120Hz, a 144Hz or a 240Hz refresh rate (though it does support AMD FreeSync and Tom’s Hardware got G-Sync working despite it not being certified by Nvidia). While the EW3280 boasts several worthwhile high-end features like a bright, vibrant image, an IPS/W-LED panel, HDR10, 4K and a sleek design with minimized bezels, it, unfortunately, features a 60Hz panel and 5ms input lag. To get a 4K monitor that includes everything this display has to offer, as well as a better refresh rate, you’ll generally need to shell out significantly more than the $999 CAD this display typically costs in Canada.

Before I get to more of the monitor’s specs, I’ll explain what I’m using the EW3280U for. First and foremost, this display is for work. That involves a lot of writing, but also editing images with Photoshop CC, audio with Audition CC and video with Premiere CC. I’m primarily a Mac user and typically have my laptop mounted on the left-hand side of whatever monitor I’m using for extra screen real-estate. Because the broader internet and most apps aren’t formatted with a 4K resolution in mind, I scale my screen down from 3840 x 2160 pixels to one of Apple’s ‘Larger text’ options, which looks like 2560 x 1440 but maintains the 4K crispness. Windows also features similar scaling to make sure everything is large enough to see, and generally, I set it to roughly 150 percent.

This results in me still getting a large 4K workspace, which makes editing photos and videos easier because I’m able to see additional detail, while still ensuring I don’t need a magnifying glass to browse the internet or use the user-interface. The monitor also supports 95 percent of the DCI-P3 colour gamut, making it great for editing photos and video, a task I find myself doing often. To get the most out of the colour profile, however, you’re going to need a high-speed HDMI, or USB-C cable, which I”ll get more into later. 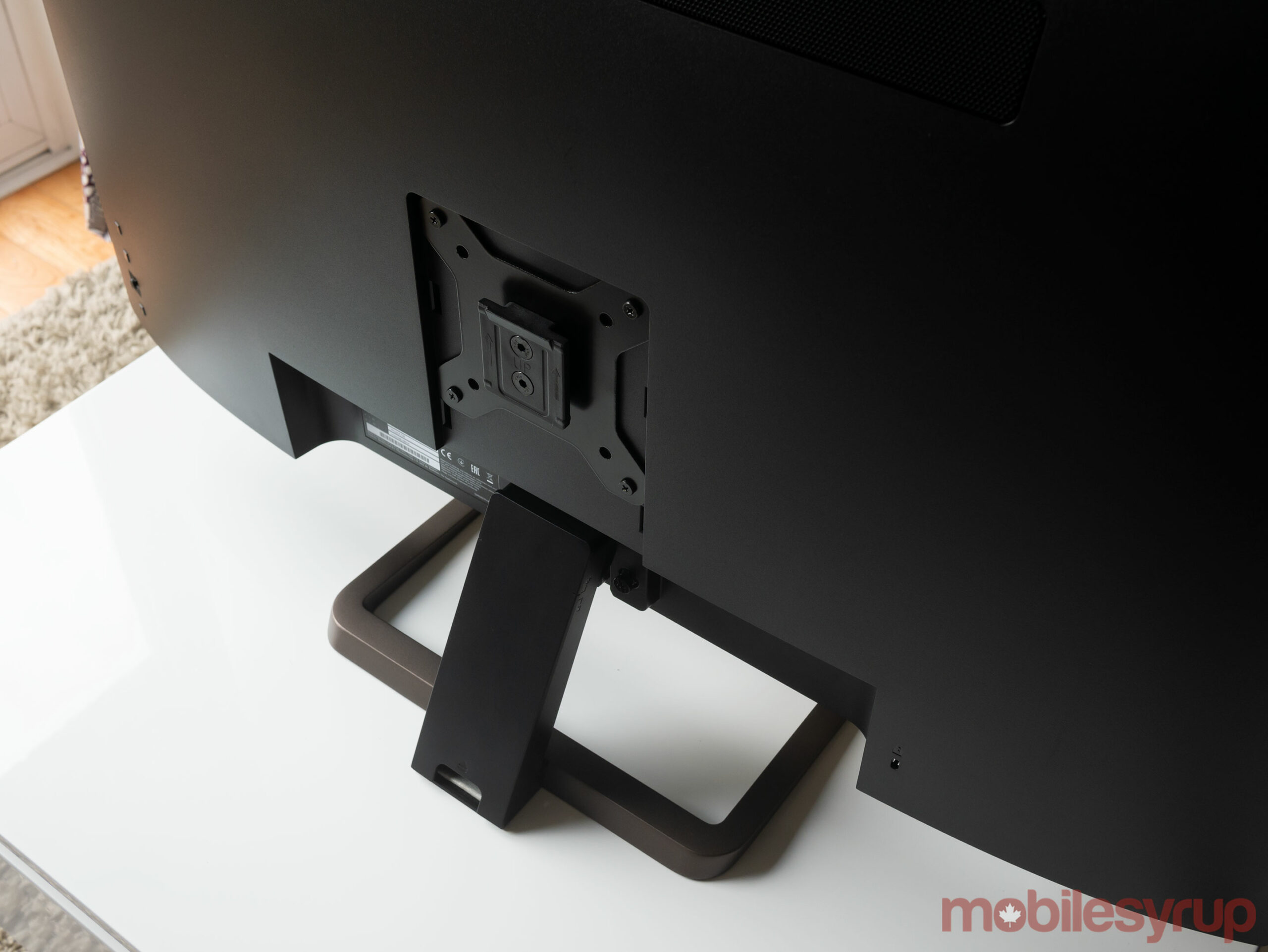 Along with work, I also opted for the EW3280U because I wanted to play 4K HDR console video games with the Xbox One X and PlayStation 4 Pro in my office. I’ve always preferred gaming from an upright position close to a monitor and in a chair, rather than laid back on the couch.

I know this isn’t the way most console gamers play, so I understand I’m in the minority with this, but I feel it helps me stay focused on the game better, especially when playing first-person shooters like Apex Legends. Because console games aren’t capable of higher refresh rates, the fact that the EW3280U doesn’t support 120Hz isn’t a concern for me. However, my opinion might change when the PlayStation 5 and Xbox Series X launch since the two next-gen systems are capable of variable refresh rates.

Regarding HDR support, the features this monitor offers are interesting but not exactly useful in all situations. The EW3280 includes something BenQ calls HDRi, a feature that alters the monitor’s tone map to your room’s environment. In general, this seems to increase the contrast between the EW3280’s brightest and darkest colours. I wasn’t particularly fond of ‘Cinema HDRi’ or ‘Game HDRi,’ whether I was just browsing the internet or playing on a console. In a sense, this is BenQ’s take on Apple’s ‘True Tone’ ambient light matching technology. 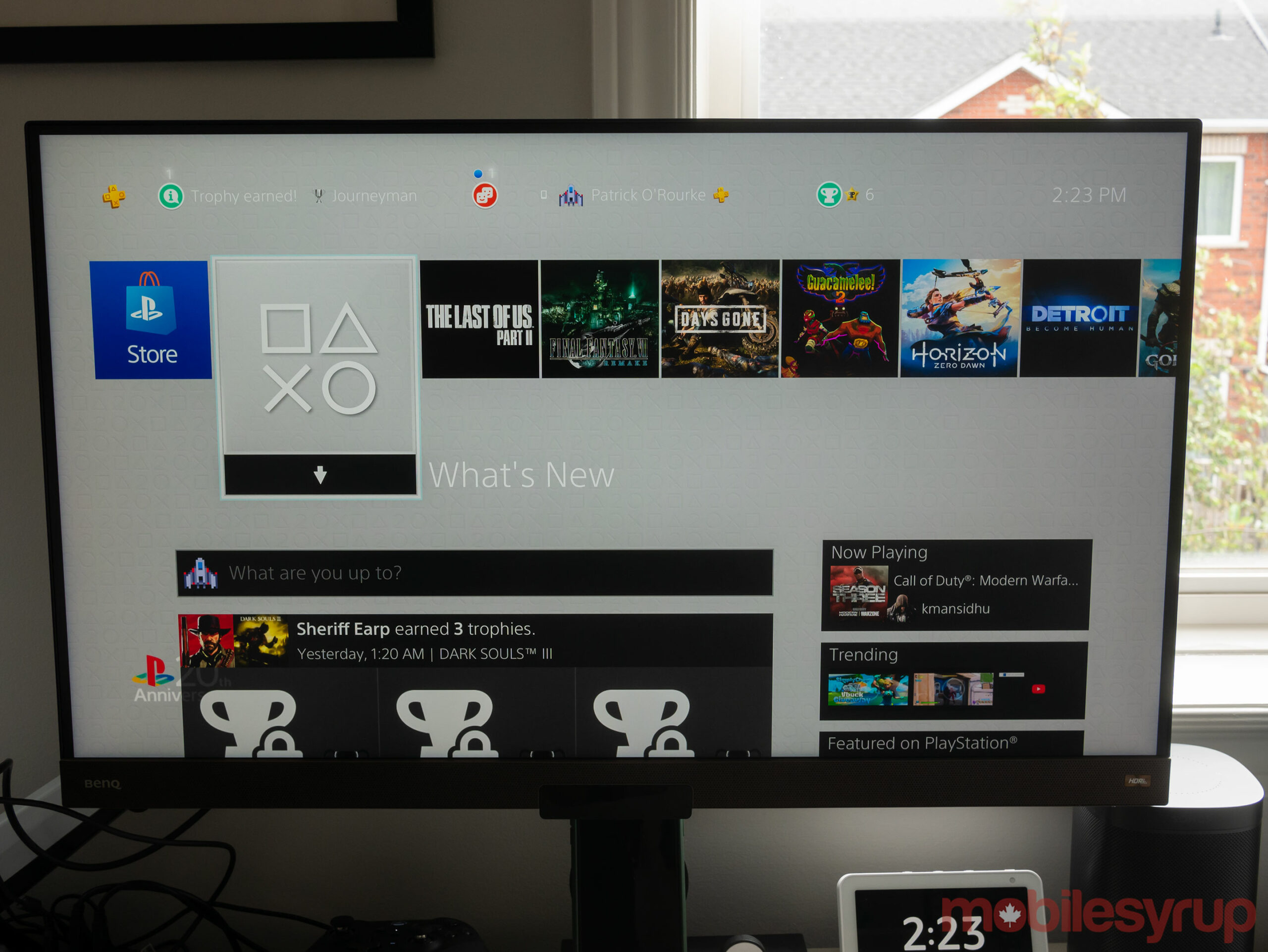 Instead, I opted for standard Display HDR (HDR10) when playing games on console, which looks great. It’s worth noting the world of macOS and Windows HDR is still a little confusing. While Apple’s 2020 MacBook Pro is capable of outputting HDR to an external monitor, I found flipping the feature on resulted in washed-out colour. I experienced the same results when turning on a similar setting with my gaming PC. HDR support should only be used when you’re consuming HDR content because otherwise, it just creates a less vibrant image. For me, HDR10 really only matters in the context of console gaming anyway, so I didn’t find this to be an issue. You also need a high-speed HDMI cable to take advantage of the upgraded brightness/contrast features since the DisplayPort 1.2 port can’t handle true HDR.

In terms of ports, the EW3280 includes two HDMI 2.0 slots, one DisplayPort 1.2 and thankfully, a single USB-C port that also charges devices. Since I use the monitor with my MacBook Pro, the USB-C port is great because it both connects the laptop to the display and charges it, removing the need for an external power cord. This is the true dream of USB-C’s one port to rule them all goal that rarely actually works out. However, you should be aware that on some older MacBooks you only get all of the display settings by plugging into the left side of the computer. 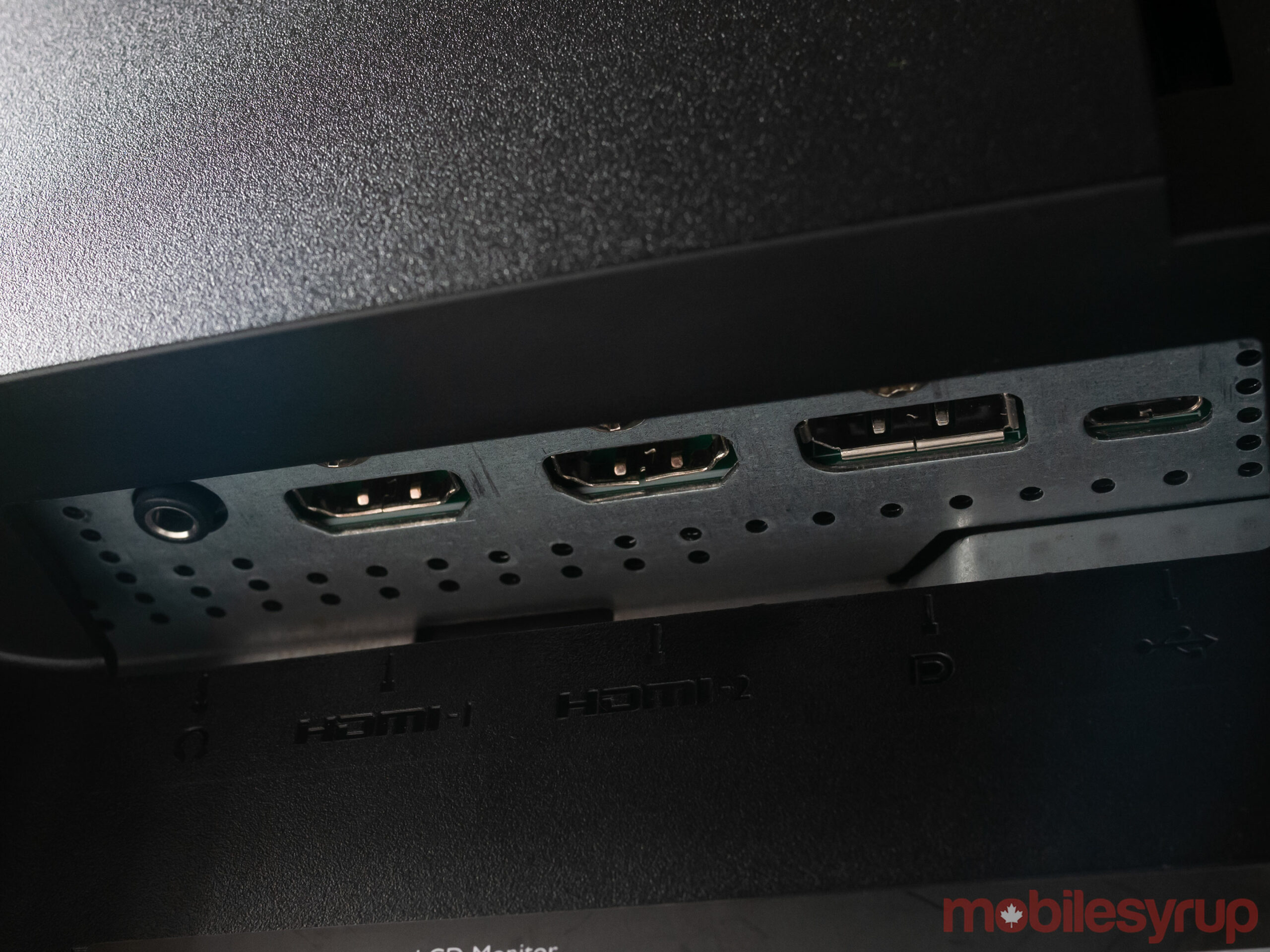 My Xbox One X and PlayStation 4 Pro are hooked up via HDMI, while my ageing desktop gaming PC is connected through the DisplayPort, allowing me to have all of the devices I use daily plugged in and easily accessible to me in my office. I also purchased a relatively cheap monitor and laptop arm from Amazon, so I have more maneuverability and can angle the BenQ EW3280U better.

This isn’t something most will need, especially since the display measures in at sizable 32-inches and features a metal stand that feels surprisingly high-quality but is unfortunately easily scratchable. Speaking of size, there’s a strong possibility a 32-inch monitor might be a little large for some people. While I initially felt this was the case, I quickly grew to appreciate the ample display real-estate it offers. 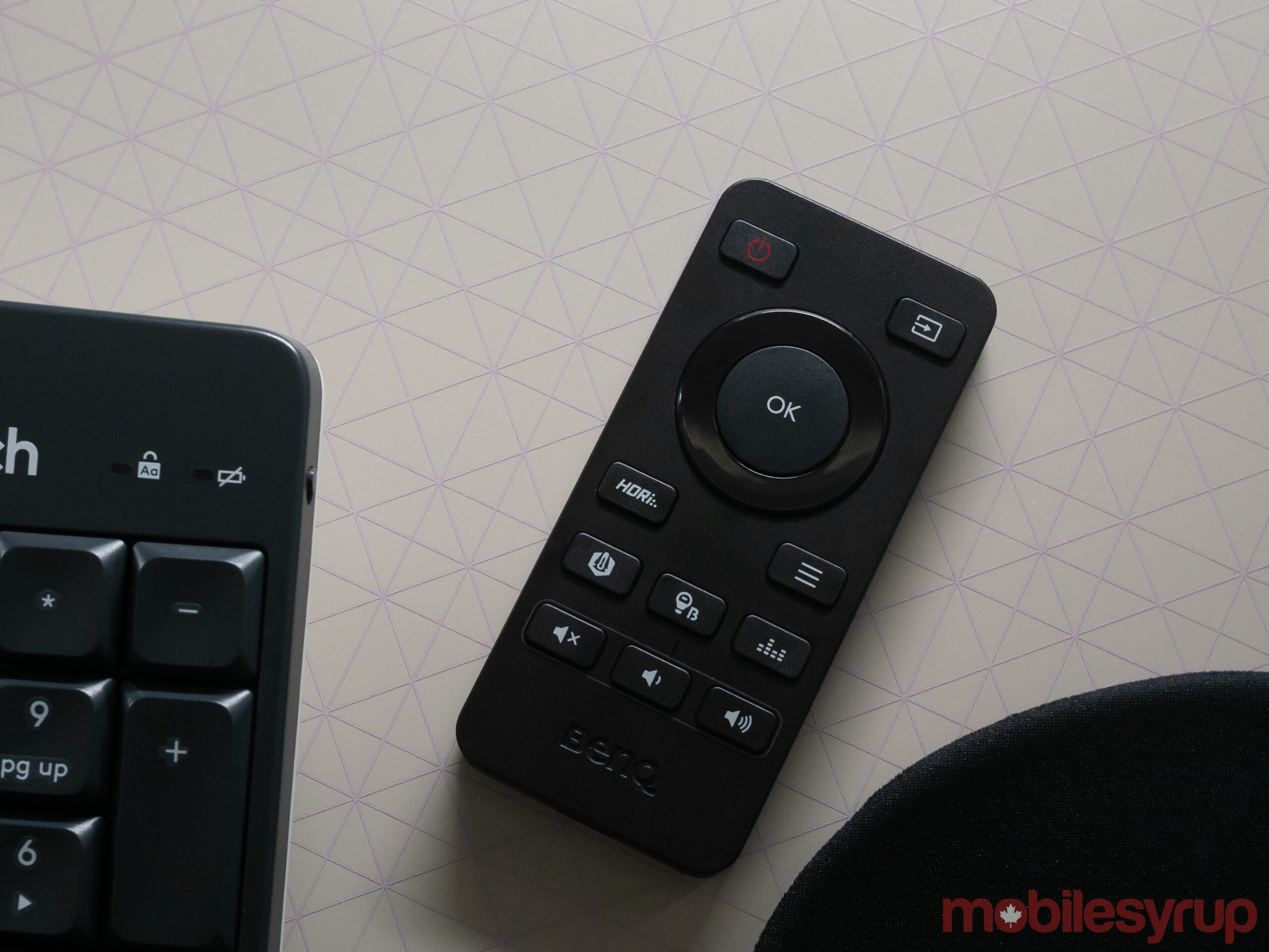 Regarding sound quality, the EW3280 features surprisingly capable speakers for a monitor, as well as a 3.5mm headphone jack. I usually wear headphones when gaming and working, so I haven’t found myself using them very often. Still, it’s a welcome surprise the display’s internal speakers are pretty good.

Other features worth noting include that the display comes with a controller, making it easy to switch inputs and change settings. This is a rarity in the monitor space and something more manufacturers should start including with their displays. Another simple but useful design feature is a volume wheel, making it easy to quickly turn up and down the audio just by reaching forward. 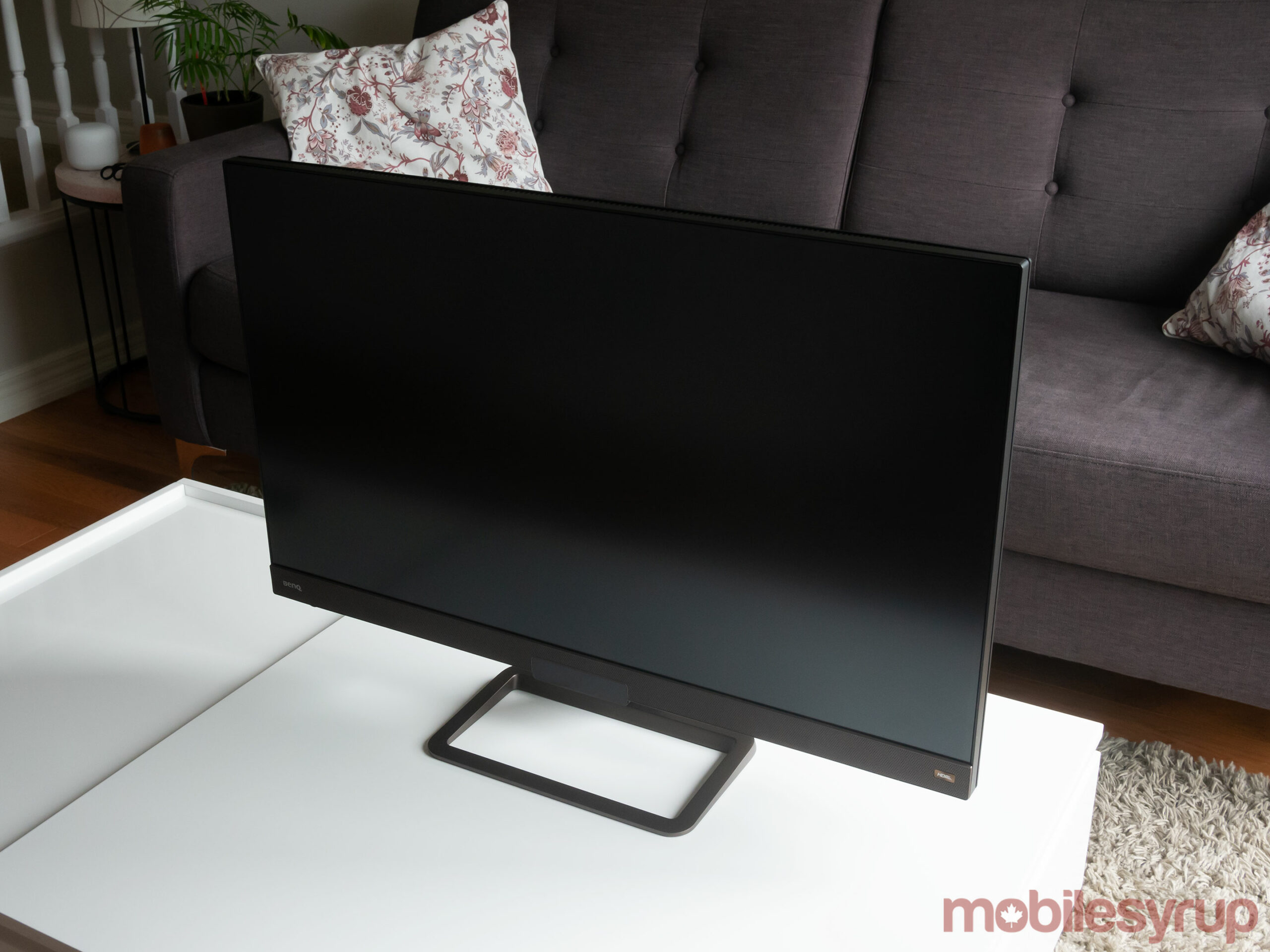 Overall, the only issue I’ve had with the BenQ EW3280U is that it doesn’t look great in direct sunlight. I have two large windows behind the monitor in my office, and if the blinds aren’t closed and I’m playing a darker video game, the display is difficult to see.

Make no mistake though, despite being cheaper than similar speced displays, the BenQ EW3280 is a pricey monitor, coming in at a $999 CAD at most retailers. That said, if refresh rate isn’t a concern for you and you’re looking for a 4K HDR display that’s great for both work and play, the BenQ EW3280U is difficult to beat.

Give it a rest, fanboys — PlayStation games coming to PC is a great thing