One of the more standout features set to arrive in Android 11 is now going live for Google’s Messages app.

As spotted by some users over on Reddit, Android 11’s ‘Bubbles’ feature can now be enabled for Messages. Bubbles, for those unfamiliar with the feature, seems to be an operating system-level version of Facebook Messenger’s ‘Chat Heads’ functionality. It will allow users to access conversations on their Android phone through floating bubbles easily — hence the name — that they can move around the screen.

Although Bubbles were partially enabled during the Android 11 Developer Preview, the feature had some bugs that still needed working out. Oddly, Bubbles weren’t available for Google Messages when the first Android 11 beta arrived despite being available during the developer preview. About midway through June, Google’s official ‘/u/androidbetaprogram’ Reddit account confirmed that the beta version of Messages would get Bubbles support in the coming weeks.

Now Bubbles support is rolling out to the Messages beta. Based on the reports, it appears to be a combination of app update and server-side push. Bubbles work on Messages beta version 6.3.052, however, several users with that update — including myself — can’t enable Bubbles. Likely, there’s a server-side component to this. 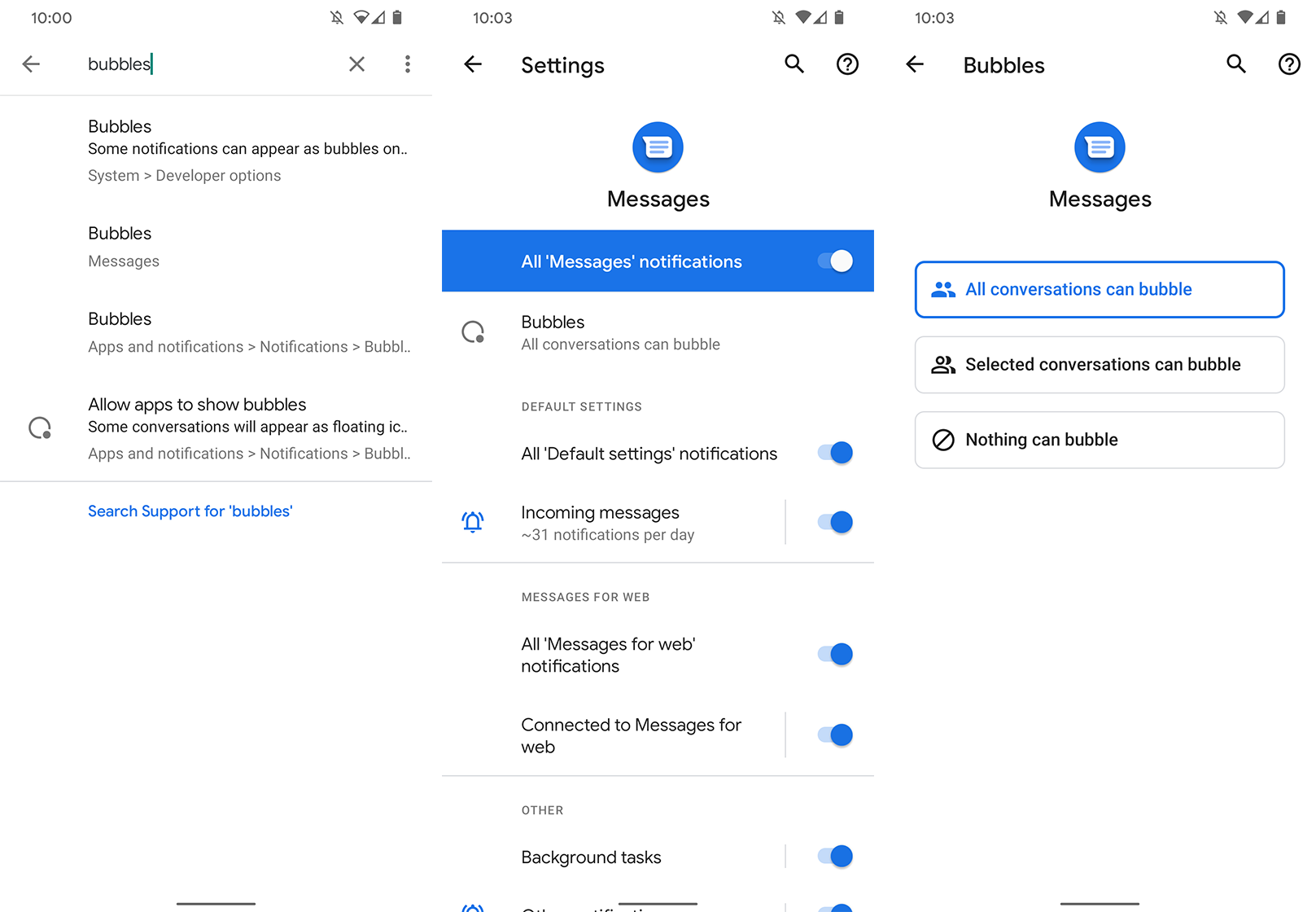 It’s worth noting that there are a few steps to make sure Bubbles works. The first is turning it on through Android. If you search ‘Bubbles’ in the Settings app, you should get results for a toggle to enable in Developer Options and a toggle under ‘Apps and notifications’ > ‘Notifications’ > ‘Bubbles.’ Make sure both of those are turned on. Interestingly, the Settings menu also includes a link to the Messages app’s settings to turn on Bubbles there even though I currently don’t have the toggle.

It’s worth checking Messages’ notification settings. To do so, press and hold on the Messages app icon > tap the ‘i’ icon > Notifications > Bubbles and make sure you select an option that will allow conversations to bubble. 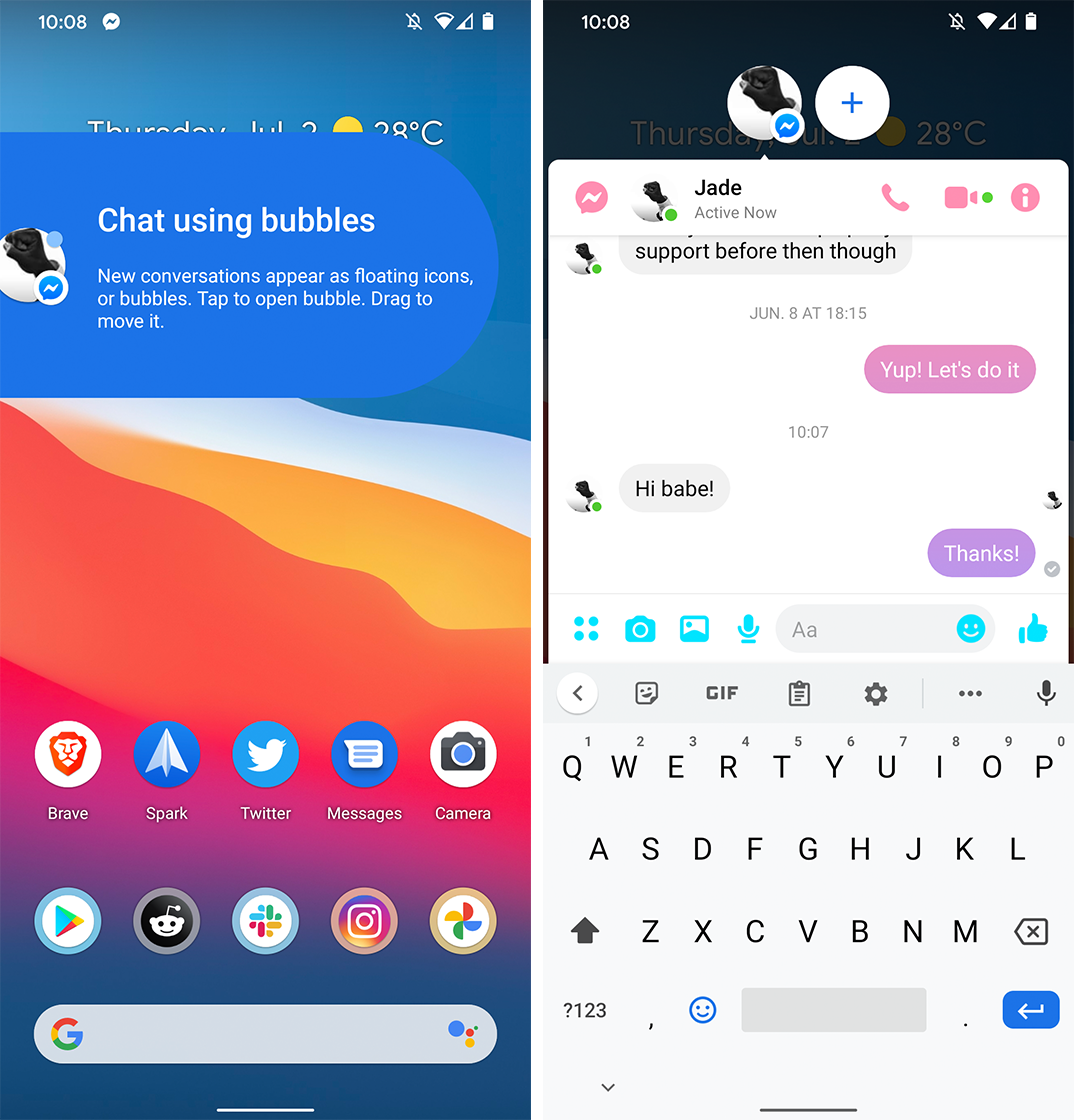 This screenshot uses Facebook Messenger, which supports Bubbles, but the UI looks the same for Messages.

Finally, there is a setting within the Messages app itself that needs to be turned on. This last toggle seems to be attached to a server-side update, however, so if it isn’t there for you, it should show up eventually. Open Messages > tap the three-dot menu button > Settings. If you’re lucky, you’ll have the ‘Bubbles’ setting here, which should mean you’re ready to go with Bubbles in Messages.

Despite the hassle of enabling Bubbles for Google Messages, it’s worth noting that those running the Android 11 beta can also use Bubbles with any other app that supports it. Unfortunately, the onus is on app developers to add support, but I imagine most chat apps will likely take advantage of the API. Facebook has already adapted Messenger’s Chat Heads feature to rely on Bubbles instead, and it works quite well.