The slightly over $100 smart speaker category is growing extremely competitive.

There are already several great low-cost smart speakers like Amazon’s new circular Echo and Google’s Nest Audio. Now, with the release of the $129 HomePod mini, Apple also aims to enter this space with its own tiny audio device.

While the new HomePod mini is indeed quite miniature, especially compared to the standard HomePod, it still manages to emit decent-sounding audio for such a small package.

That said, despite Apple continuing to expand Siri and the HomePod’s features with functionality like ‘Intercom,’ the tech giant’s voice-activated assistant isn’t quite as capable as competitors like Google Assistant and Amazon’s Alexa. 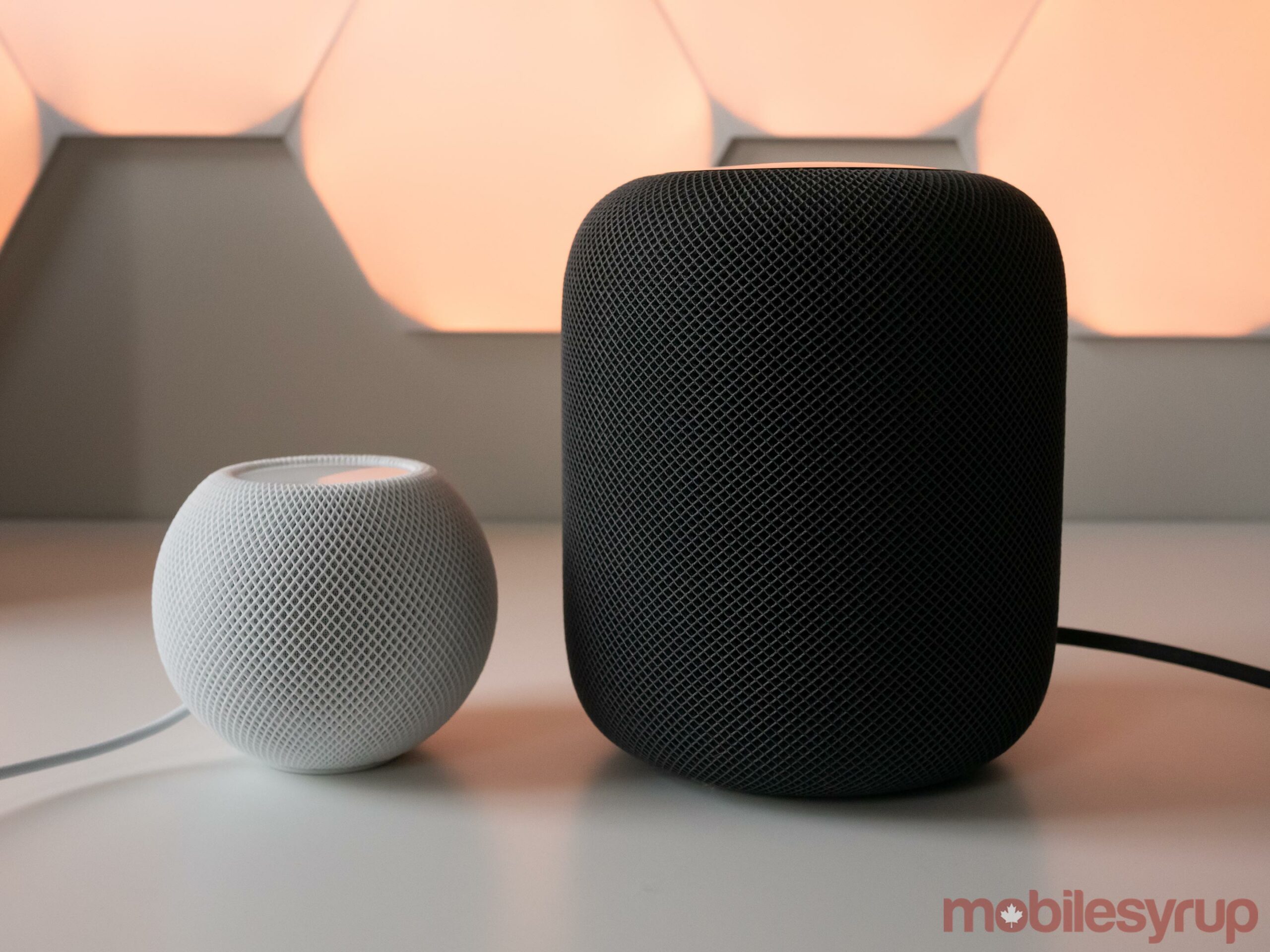 Further, music streaming service compatibility, unfortunately, still isn’t great. Via voice commands, you’re only able to use the HomePod mini with Apple Music and Amazon Music in Canada. Spotify, my music streaming platform of choice, still works over AirPlay 2, but not through voice commands.

While this might be an issue for some, if you live in Apple’s walled-garden, you don’t have anything to worry about.

There’s still a lot to like about the HomePod mini, especially its sleek design, smart home device compatibility and easy to use touch controls. Further, Apple is quickly approaching feature parity with Nest and Echo speakers in several respects. 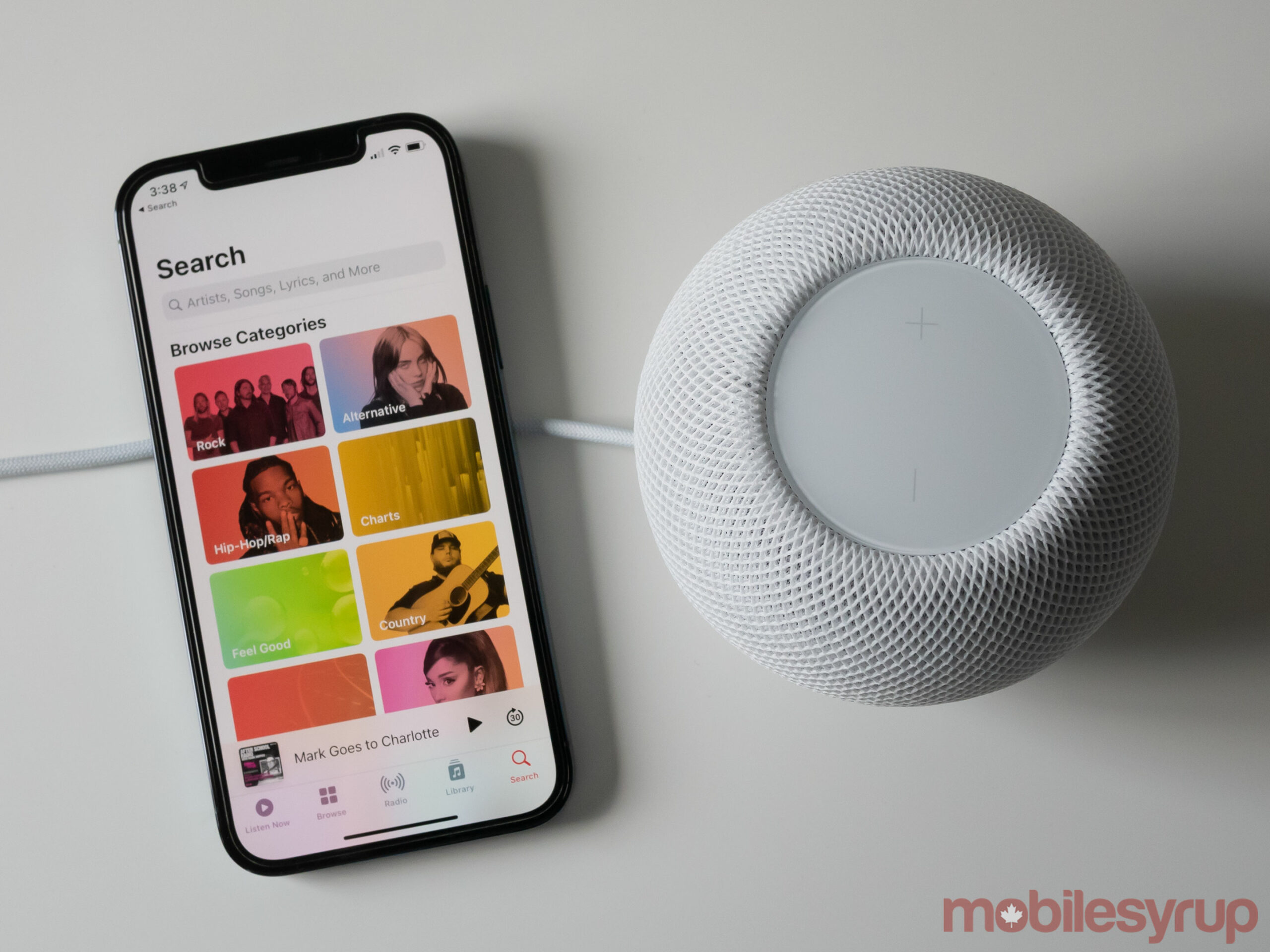 The first thing I noticed about the HomePod mini is how small it is. The smart speaker is tinier than both the Nest Audio and Amazon’s Echo, measuring in at just 3.3-inches.

Its ‘Space Grey’ and ‘White’ colours, coupled with the same weaved-fabric design as the full-sized HomePod, blend perfectly into your house, allowing it to fade into the background of its decor.

The bottom of the device features a soft plastic base ensuring the speaker doesn’t move around. The top of the HomePod mini also includes a small LED display that shows an animated waveform when music plays or Siri speaks.

This gives the HomePod mini a sleek and somewhat unique look in the increasingly crowded smart speaker space. Along with looking cool, the display also controls audio, allowing you to tap it to play/pause, double-tap to move to the next track, triple-tap to go to the previous track and to launch Siri by touching and holding. You can also turn the volume up and down by tapping the plus and minus icons on the display.

As far as smart speakers go, the HomePod mini is one of the best looking out there, especially in the mid-range category. 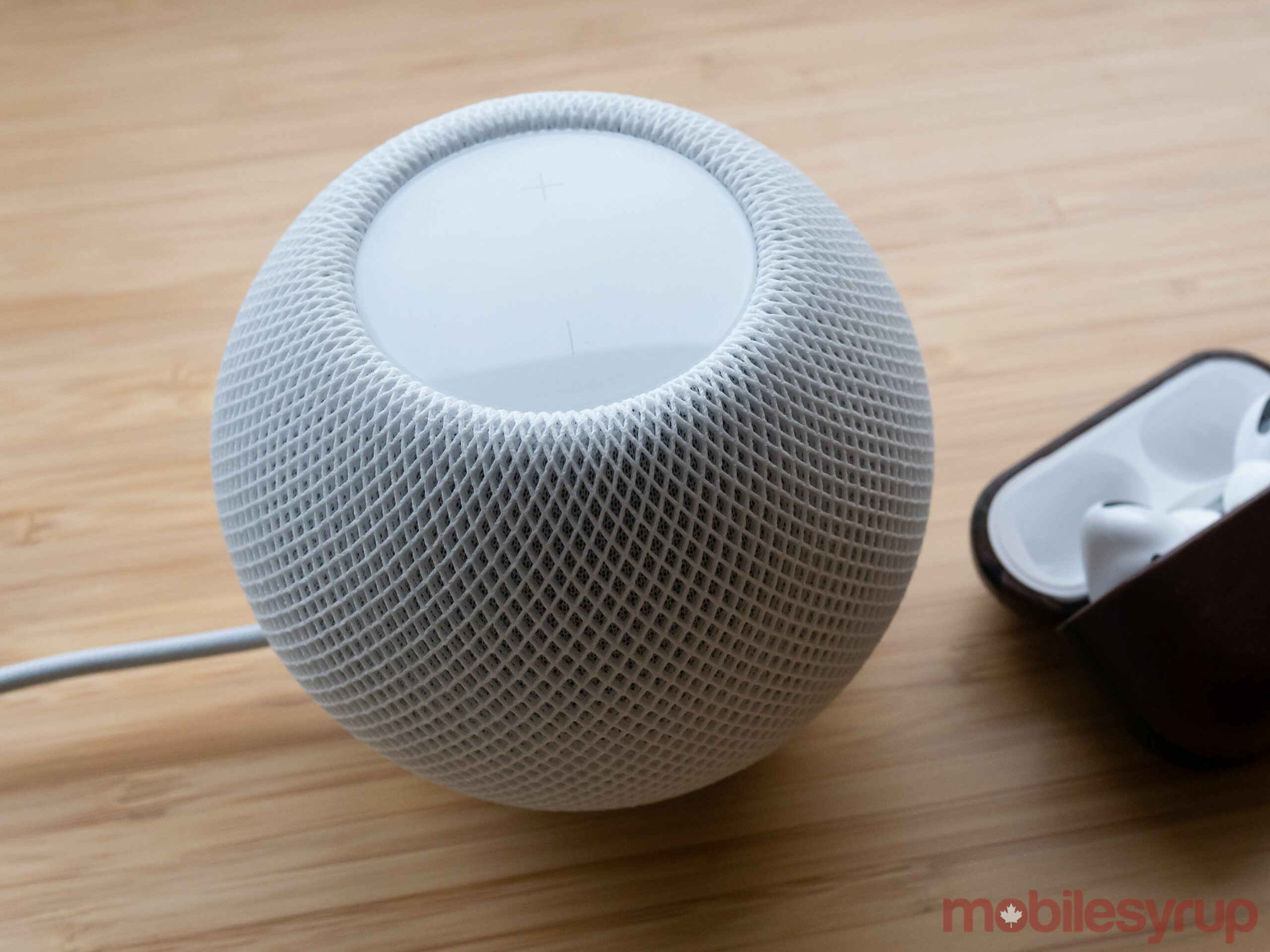 The HomePod mini’s core is powered by Apple’s S5 chip, the same processor included in its Apple Watch Series 6 and Apple Watch SE. In comparison, the HomePod features Apple’s A8 chip.

Though it’s unlikely the tiny speaker will ever take full advantage of the power offered by the S5, it’s good to know the underlying technology behind its computational audio and tuning algorithms is more than capable.

Apple claims its tuning algorithms shift audio over 180 times a second to adapt to the song’s unique characteristics or podcast currently being played. The chip also allows the HomePod mini to optimize its loudness, adjust its dynamic range, and predict its driver’s and passive radiators’ movement in real-time. 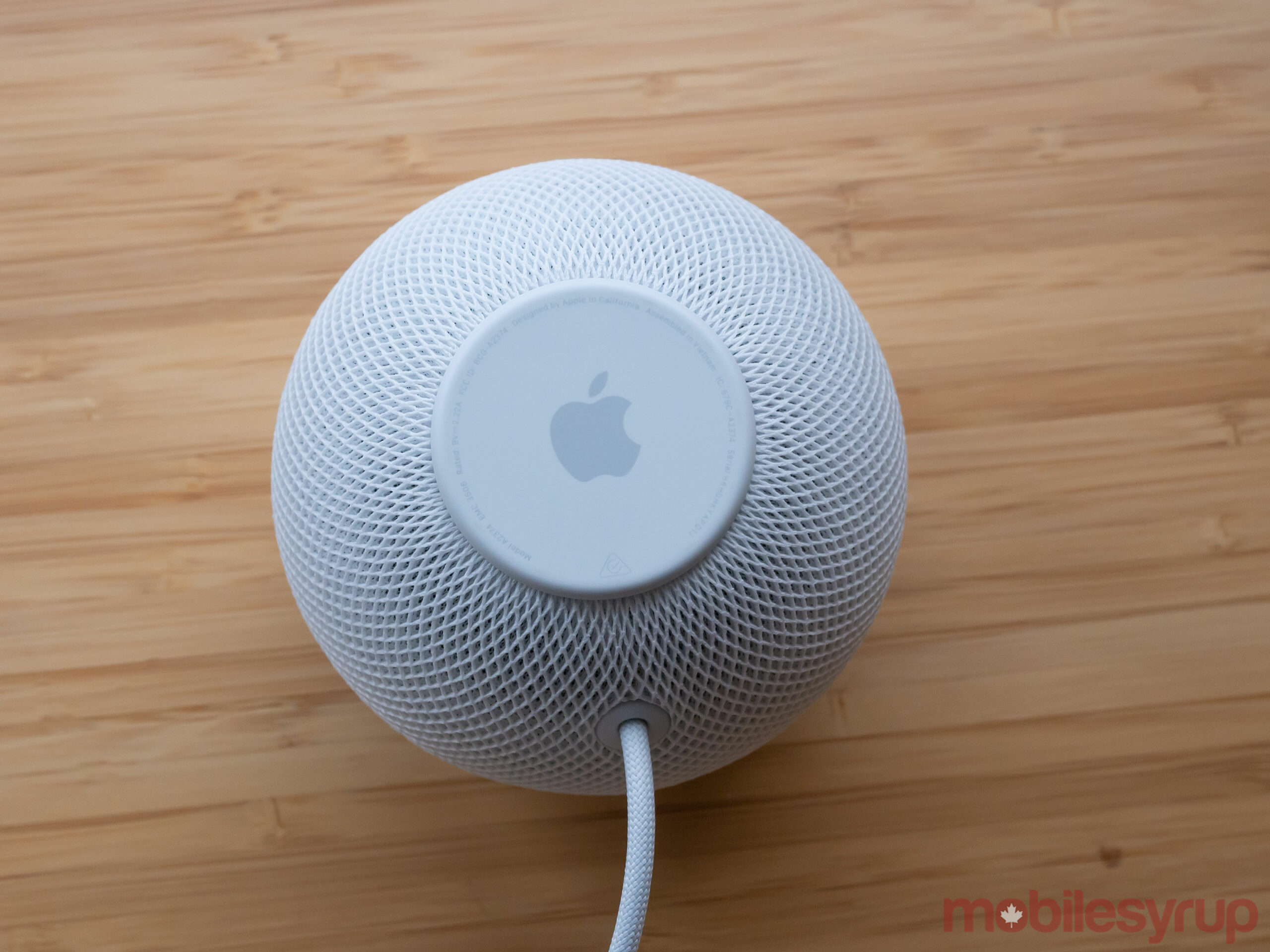 All this technical jargon means the HomePod mini can emit room-filling sound with a wide soundscape despite its small size (more on the sound quality later). 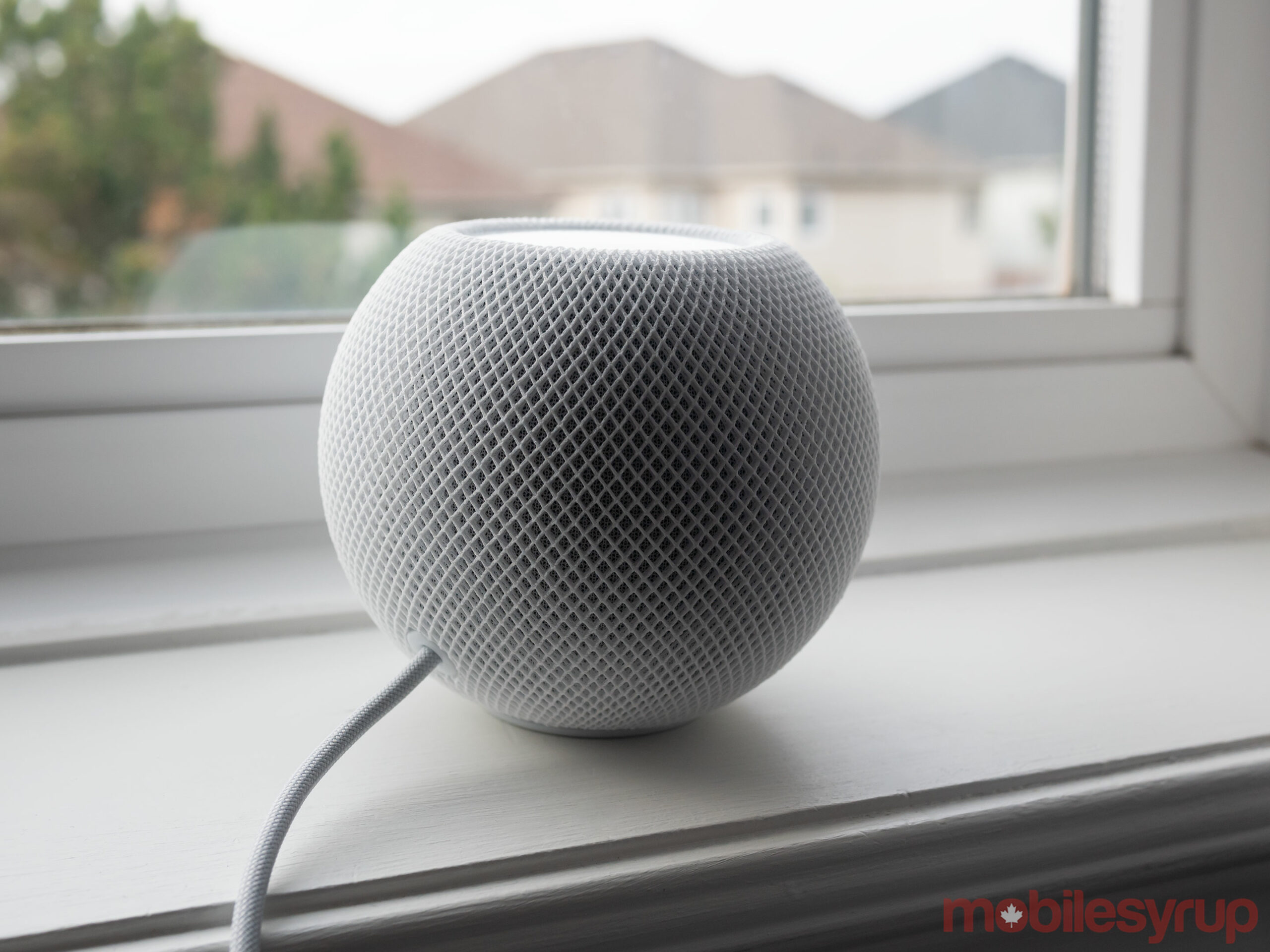 First off, while the HomePod mini doesn’t come close to matching the likes of the standard HomePod and Sonos’ excellent, but more expensive One speaker, its quality is in-line with the Nest Audio and the most recent Echo.

This means it’s capable of producing a wide, detailed sound stage and features a surprising amount of bass. Whether I was listening to heavier, guitar-driven tracks like Silverstein’s ‘November,’ softer acoustic music like Taylor Swift’s ‘Betty’ (check out the live version — it’s sick), or something with a little more bass like Brakence’s ‘fuckboy,’ everything sounds great pumping through the tiny HomePod mini. I’m especially impressed the smart speaker’s bass never feels overwhelming, an issue the standard HomePod often suffers from unless you adjust its EQ.

This wide soundscape is amplified when you stereo pair two HomePod mini speakers, a process that only requires you to set up both minis in the same Home room. Again, I’d describe the stereo playback quality as comparable to my experience syncing two Nest Audio speakers together. 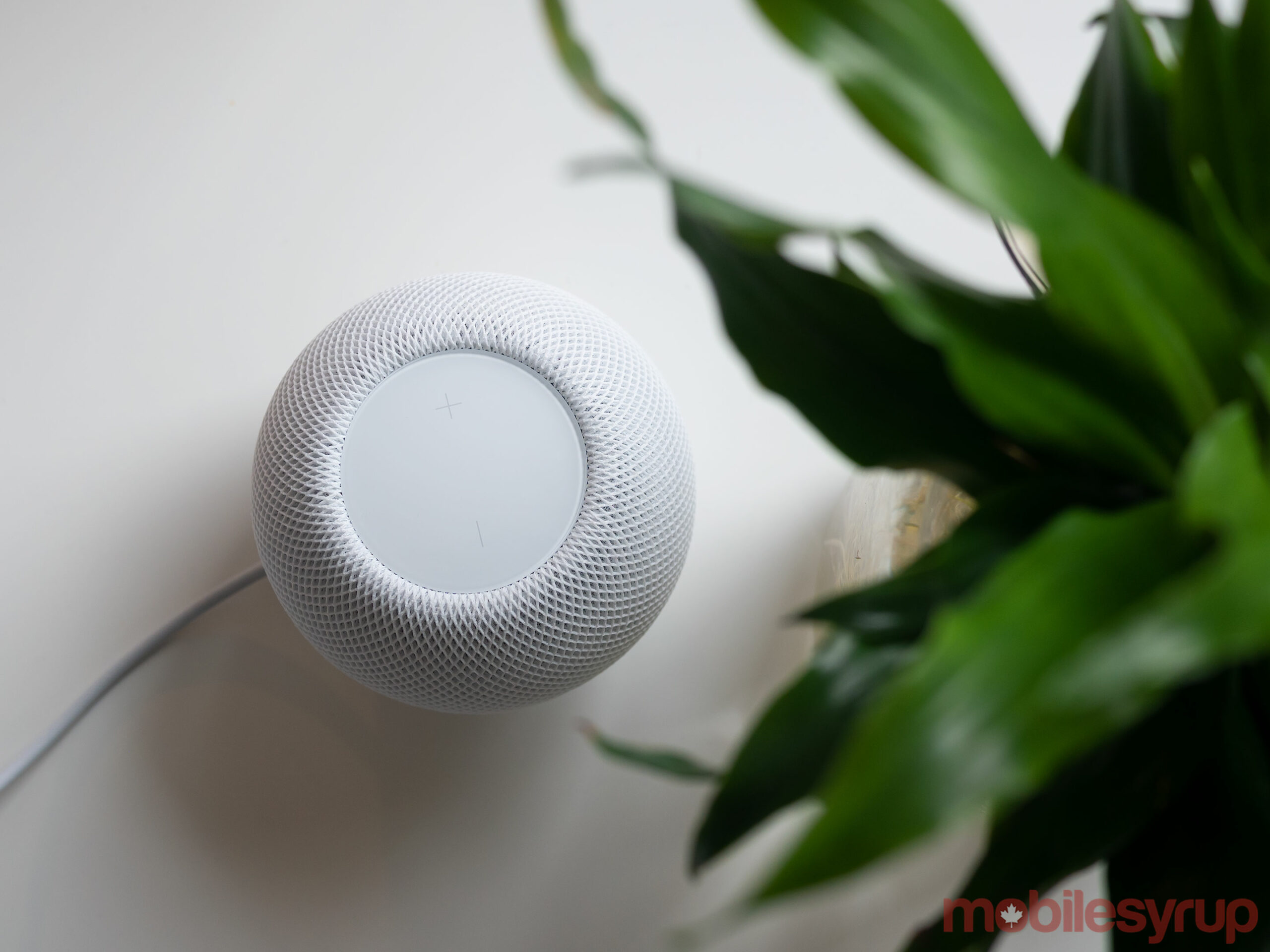 Apple has also played catch-up with its competitors in the smart speaker space over the last few years. The HomePod mini and standard HomePod are now capable of multiroom audio and can even control other AirPlay 2 speakers via voice commands. I’m also fond of the new ‘Proximity Controls’ that take advantage of any iPhone with a U1 chip, making it super easy to handoff music playing on your iPhone 12 simply by moving the smartphone near the HomePod mini.

Of course, you could do this through Apple Music on your iPhone, but there’s something magical about just holding your device near a HomePod and having the music instantly play.

The HomePod mini, unfortunately, doesn’t calibrate its sound to the specific room it’s sitting in like the HomePod or Google Home Max, though this is to be expected given it’s a mid-range smart speaker. 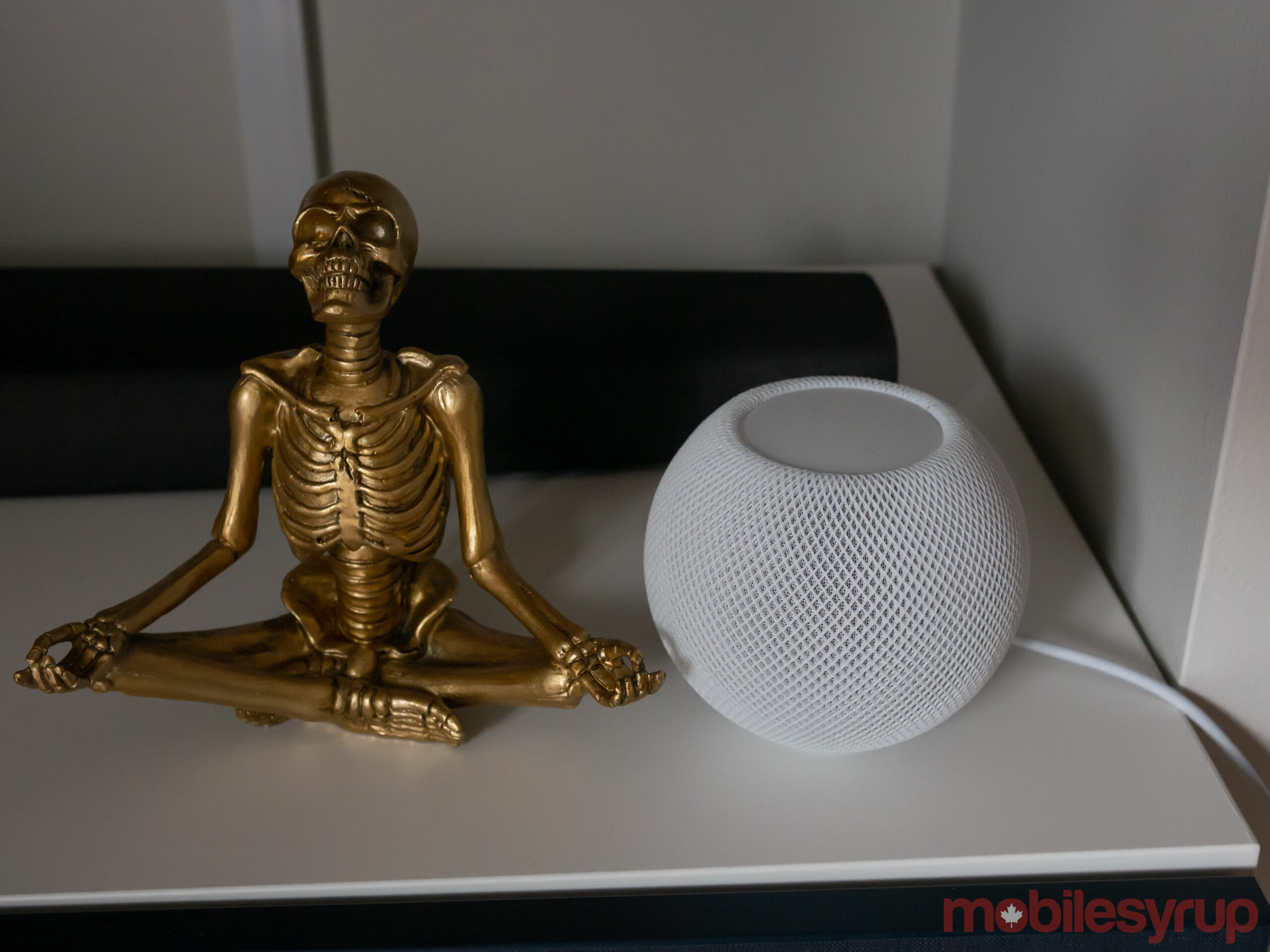 It’s clear Google Assistant, and to a lesser extent, Amazon Alexa are more capable digital assistants than what Apple’s Siri has to offer.

That said, if you live in Apple’s tech world, you’ll likely be more than happy with the HomePod mini’s Siri integration. For example, along with using voice commands to select what room music is playing in, you can also take advantage of Siri to make phone calls, send texts, access the ‘Find My’ app and create Notes/Reminders and Tasks. 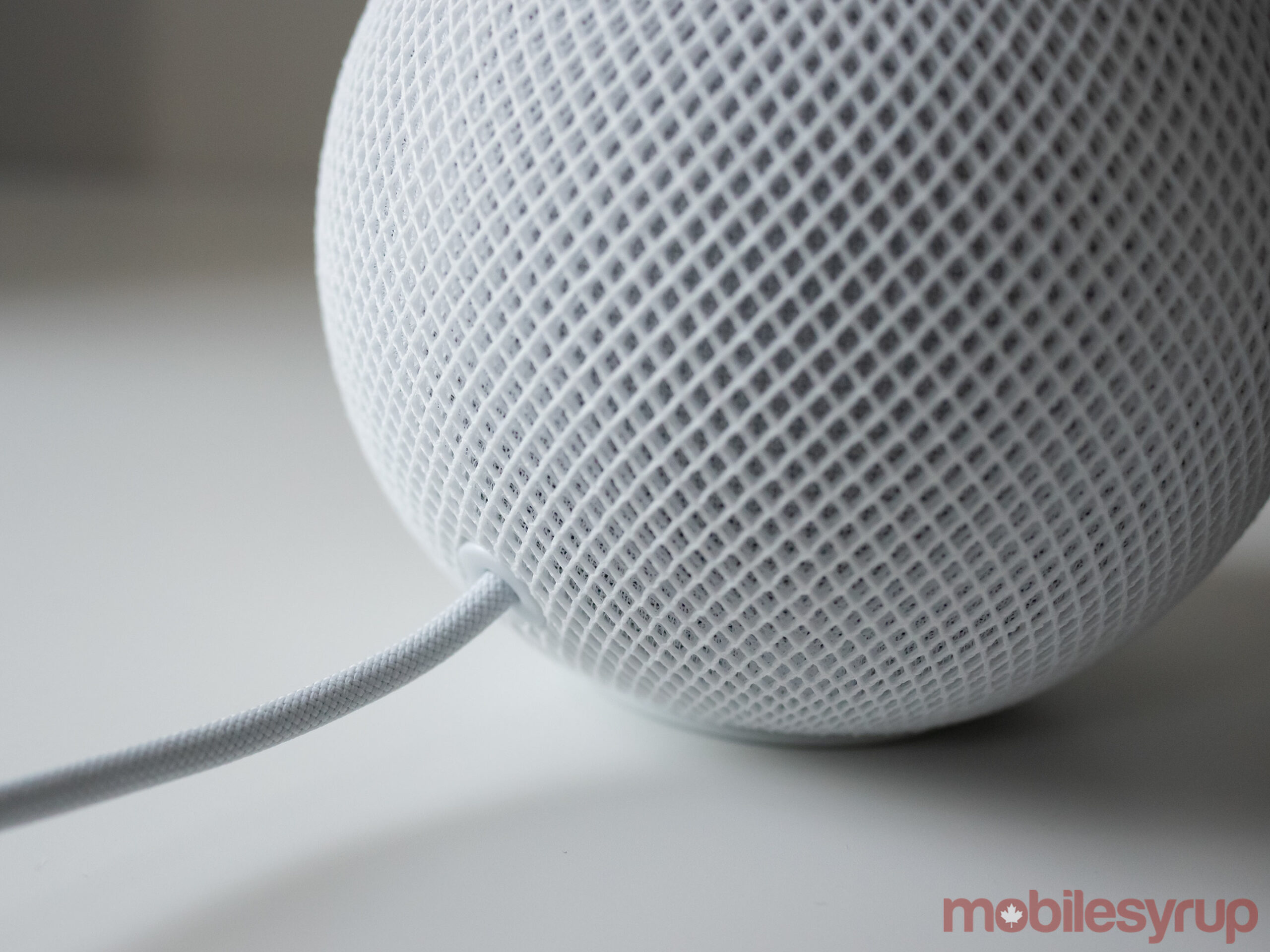 Of course, this all hinges on you using Apple’s apps and services solely. Basically, if you’re like me and use a mix of Google’s and Apple’s hardware and apps, the experience is far more hit and miss, especially when it comes to getting my ‘Personal Update’ at the start of the day.

You can also now set up Siri Shortcuts for tasks like starting your HomeKit compatible smart vacuum, pull answers to questions from Safari, get Apple News story summaries and set Alarms and Timers.

Then there’s Intercom, Apple’s new feature that allows you to send quick messages between HomePods like a modern-day intercom system. Though I didn’t spend much time sending messages over Intercom given my house is tiny and it’s only myself and my partner living here (I’d rather just yell, personally), it works just as well as similar features available on Echo and Nest Audio devices. This is, once again, Apple playing catch up with its competitors in some ways. 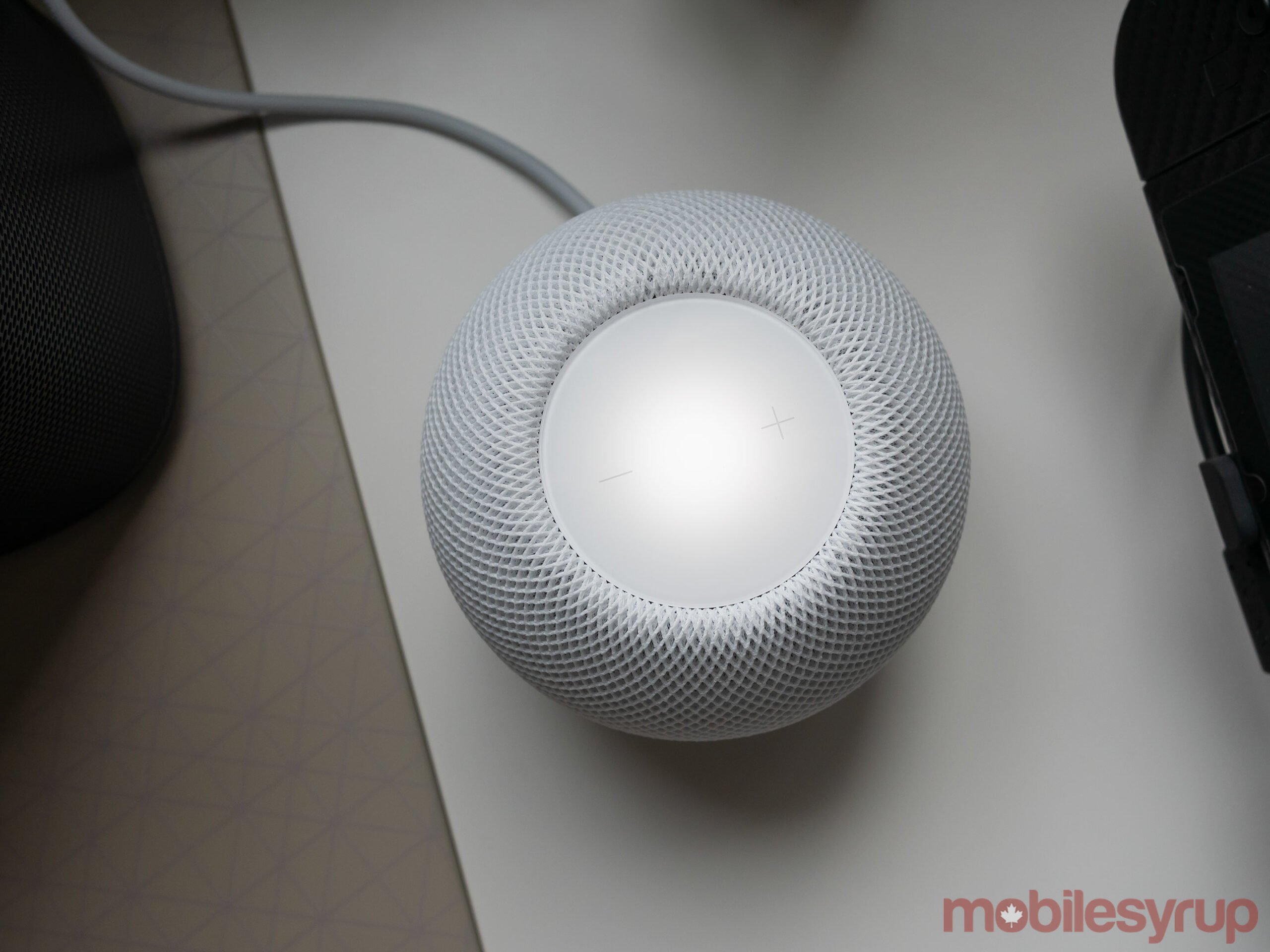 Even the smart home situation has improved significantly when it comes to Apple’s HomeKit platform and its Home app. While I still prefer Google’s Home app and overall smart home ecosystem, nearly all of my smart home devices, including my several Philips Hue lights, Sonos One speakers and Apple TV 4K, all work great with Siri’s voice commands and the HomePod mini.

I still have issues getting my AirPlay 2 compatible Vizio TV and Nanoleaf Shapes Panels to work via the Home app consistently. To be fair, this could be partially the fault of the smart home manufacturers behind these devices, but they all work perfectly with the Google Home app.

My main takeaway from the few weeks I’ve spent with the HomePod mini is that it’s a far more capable digital assistant than it was a few years ago as long as you reside solely in Apple’s ecosystem of devices and apps, which many people likely do. 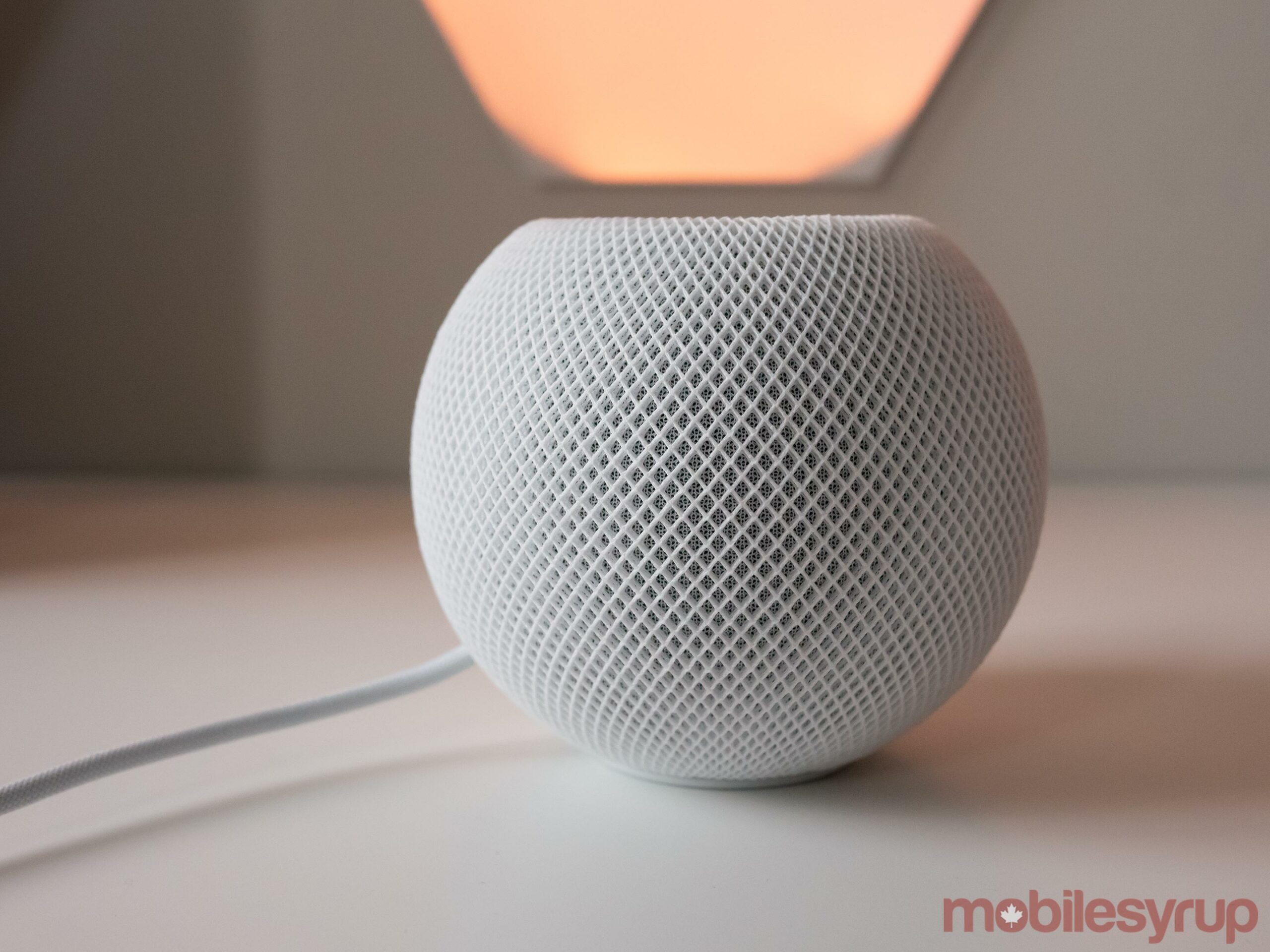 If you're an Apple device and app user, the HomePod mini is an excellent smart speaker.

Along with functionality that for the most part matches Amazon's Echo devices and Google's Nest speakers, you also get several security features, including all your requests being tied to a random identifier and not your Apple ID and encrypted smart home data, which are great features if you're concerned about how intrusive smart speakers from Apple's competitors can potentially be.

Unfortunately, if you primarily use Google services and Spotify like myself, much of the magic of Apple's HomePod mini is lost. While this might not be entirely Apple's fault, especially when it comes to Spotify integration, it's disappointing nonetheless.

Further, though the HomePod mini does indeed emit great audio, it doesn't sound notably better than the Nest Audio or the latest Amazon Echo, its two main competitors.

With all that in mind, if you live in a purely Apple world and are interested in adding a HomePod mini to expand your current HomePod's reach or just want to delve into smart speakers for the first time, the tiny, great-looking speaker is a relatively reasonably priced and well-rounded offering from the tech giant.

The HomePod mini costs $129 and releases on November 16th

"Unfortunately, if you primarily use Google services and Spotify like myself, much of the magic of Apple's HomePod mini is lost"