The end of the modern Hitman trilogy is here

For nearly two years now, I’ve been putting together a weekly ‘Streaming in Canada’ column to highlight shows and movies that just hit Canadian streaming services.

That continues — and will continue — to go strong, but as I’ve been doing it, I’ve wondered if a similar ongoing series might be worth it for video games. After all, there is a slew of on-demand gaming services on the market, including Microsoft’s Xbox Game Pass, Google’s Stadia and Sony’s PlayStation Now, and it can be difficult to keep up with new releases accordingly. And while there are a slew of lists of general game releases out there, I figured one focused on the industry’s ever-growing services could be unique.

Of course, not all of these gaming services are streaming-specific, so the ‘Streaming in Canada’ moniker doesn’t quite work here. Therefore, we’re (tentatively) calling this ongoing gaming-related column ‘Stream ‘n Load’ to encompass more services, although the name could change over time.

In any event, sit down, get comfortable and pick up your controller (or phone!), because we’re diving into this week’s new games that you can play on gaming services in Canada.

In the conclusion to the modern Hitman games’ “World of Assassination” trilogy, Agent 47 and his allies hunt down the clandestine criminal group Providence.

While Hitman 3 is on every other current console and PC, the Stadia version supports Google’s exclusive ‘State Share’ feature, which allows players to capture a playable slice of a game and send it directly to friends via screenshot or video clip. In Hitman 3, specifically, players can use State Share during any campaign or custom mission, and you’ll be able to use their weapons and items even if you haven’t unlocked them in your own game. 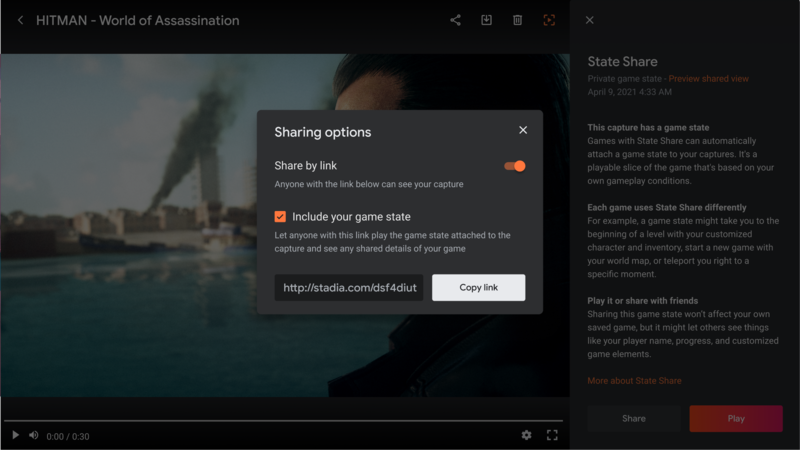 It’s also worth noting that Hitman 3‘s two predecessors, Hitman (2016) and 2018’s Hitman 2, are free with a Stadia Pro subscription. Hitman 3 also lets you bring all of your progress and levels from the previous games with you, and since Stadia is all done through the cloud, your progression will carry over automatically — no manual process required.

For more on Hitman 3, check out our review here.

Google Stadia allows you to purchase games individually and stream at 1080p/60fps. With an $11.99/month Stadia Pro subscription, you’re given access to 4K streaming and a catalogue of several free games.

With Xbox Game Pass regularly adding new titles for Xbox consoles, PC and Android (via streaming), I’ll be sure to signify which games are for which platform.

Play as Jesse Faden, newly appointed director of the supernatural U.S. government agency Federal Bureau of Control (FBC), as you explore the FBC’s paranormal headquarters to defeat a deadly enemy known as the Hiss.

Throughout her journey, Jesse will acquire different forms for her transforming gun, as well as new reality-warping abilities that let her telekinetically throw objects, glide and more.

In this prequel to Desperados: Wanted Dead or Alive, John Cooper’s quest for redemption has him joining forces with a runaway bride, shady hitman, giant trapper and mysterious lady.

During real-time tactics stealth gameplay, you’ll need to switch between five unique playable characters and figure out the best way to take out enemies.

B.K. the hole-driving raccoon swallows up his friends and their homes to earn prizes, only to end up falling into one of his own holes and being confronted by his victims.

Control a hole across several different levels and try to swallow as many objects as possible, all while avoiding obstacles and solving puzzles.

Not to be confused with another acclaimed 2019 game, Obsidian’s The Outer Worlds, Mobius Digital’s Outer Wilds follows an unnamed astronaut who’s stuck in a 22-minute time loop, which resets when the sun goes supernova.

Explore the orbiting planets to get to the heart of the time loop mystery, all while retaining knowledge from each loop to help you in your journey,

Outer Wilds is also available on Game Pass for Console and PC.

Meanwhile, Xbox Game Pass Ultimate costs $16.99/month. On top of Android streaming, this tier includes Game Pass for both Console and PC, as well as an Xbox Live Gold subscription and access to EA Play.

For more on what’s coming to Game Pass this month, click here.

What are you planning on playing this week? Let us know in the comments.

The ultimate guide to Siri Shortcuts