Astria Ascending has been one of my most anticipated games of the year since I first found out about it.

Unfortunately, the game, as developed by Paris- and Quebec City-based Artisan, never quite comes together to live up to the significant potential suggested by such guest contributors.

Astria Ascending follows eight characters who have been deemed demi-gods, granting them special powers but giving them far less time to live. With their looming sacrifice, they have to defend the world of Orcanon from a mysterious threat. On paper, the Final Fantasy XIII-esque premise is interesting, as it quickly establishes the stakes while getting you intrigued as to what the characters will do with their cursed fates.

“Like the Final Fantasy games it draws so heavily from, Astria Ascending has a turn-based combat system that is pretty satisfying.”

The key words there are “on paper,” though, because the writing often falls flat through rote, overly expository banter and poor voice acting. And because your party is made up of both human and non-human characters, there’s a rather unsubtle depiction of racism that’s on display.

With more nuanced writing, this could have resulted in a compelling character arc, but what’s actually there just feels mean-spirited, particularly from the elderly thief Arpajo. Fortunately, the characters and their surrounding environments are, at least, absolutely stunning. Cydesignation has produced some lively hand-drawn artwork for the game, which absolutely pops in action. Likewise, Sakimoto doesn’t disappoint on the music front thanks to a strong orchestral score.

The excellent presentation is important, because it helps carry otherwise dull locations that you’ll be exploring. Like Artisan’s last game, Super Neptunia RPG, Astria Ascending features a 2D perspective, so you can only explore levels going left and right. That wouldn’t be limiting in and of itself if the game’s 20-plus dungeons didn’t feel so copy-and-paste. Even the jump button to add a layer of verticality often devolves into extremely basic platforming with the occasional crumbling ledge.

Interestingly, though, it’s the battles that offset many of Astria Ascending‘s shortcomings. Like the Final Fantasy games it draws so heavily from, Astria Ascending has a turn-based combat system that is pretty satisfying. Functionally, it plays out like Final Fantasy X, where you’re able to switch between characters on the fly. This is part of a general design philosophy surrounding no character feeling “useless,” according to Artisan. 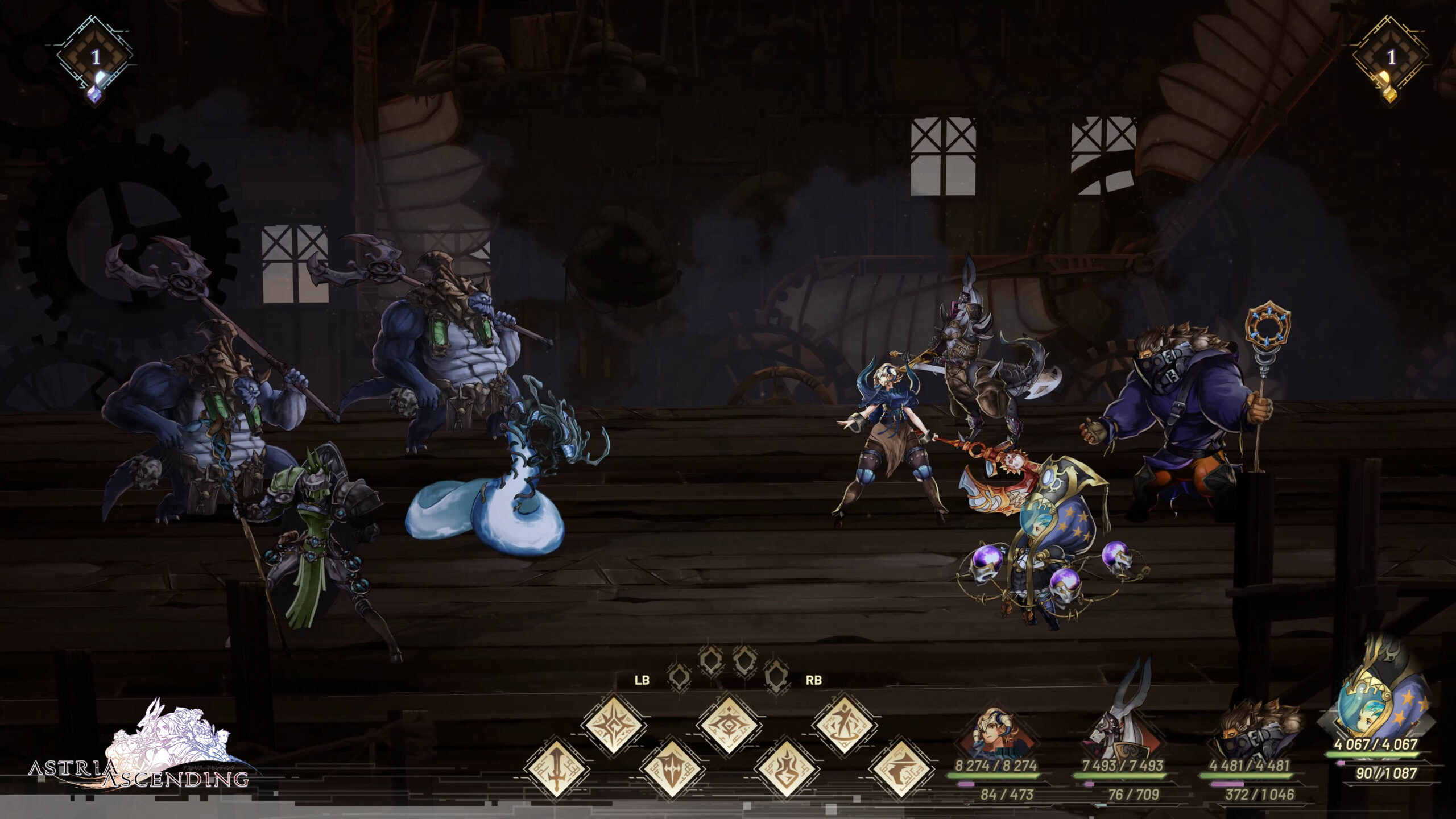 Another tenet of that is the ‘Focus’ system, which is reminiscent of Bravely Default‘s ‘Brave’ system. With Focus, you can spend points to increase the efficiency of your attacks. You start battles with a certain number of Focus Points (FP), which can increase or decrease depending on whether you can exploit an enemy’s elemental weakness.

Failing to do (either because your foe nullified or absorbed your attack) will lower your FP count, even into the negatives. This creates an engaging ‘tug-of-war’ sort of feel to combat while lending it a smart risk-reward element. Determining when to use your FP — and how to adapt should you suddenly go in the negatives — offered some welcome depth to Astria Ascending‘s combat. It’s not exceptional, but for a game of this scope, it works quite well.

“In the end, Astria Ascending is a decidedly fine game.”

In a nice deviation from other JRPGs, you also have access to the entire party from the start. I enjoyed this decision, as it allowed me to figure out the strengths and weaknesses of each characters early on and develop them accordingly as the game progresses. You can do this through a progression system akin to FFX‘s Sphere Grid, which features new abilities and permanent stat boosts. Each character can unlock new jobs as well, although some are locked behind pretty throwaway sidequests. On the flip side, Astria Ascending removes some of the tedium of classic JRPGs through wonderful quality-of-life improvements like the ability to warp out of a dungeon at will or save anywhere. 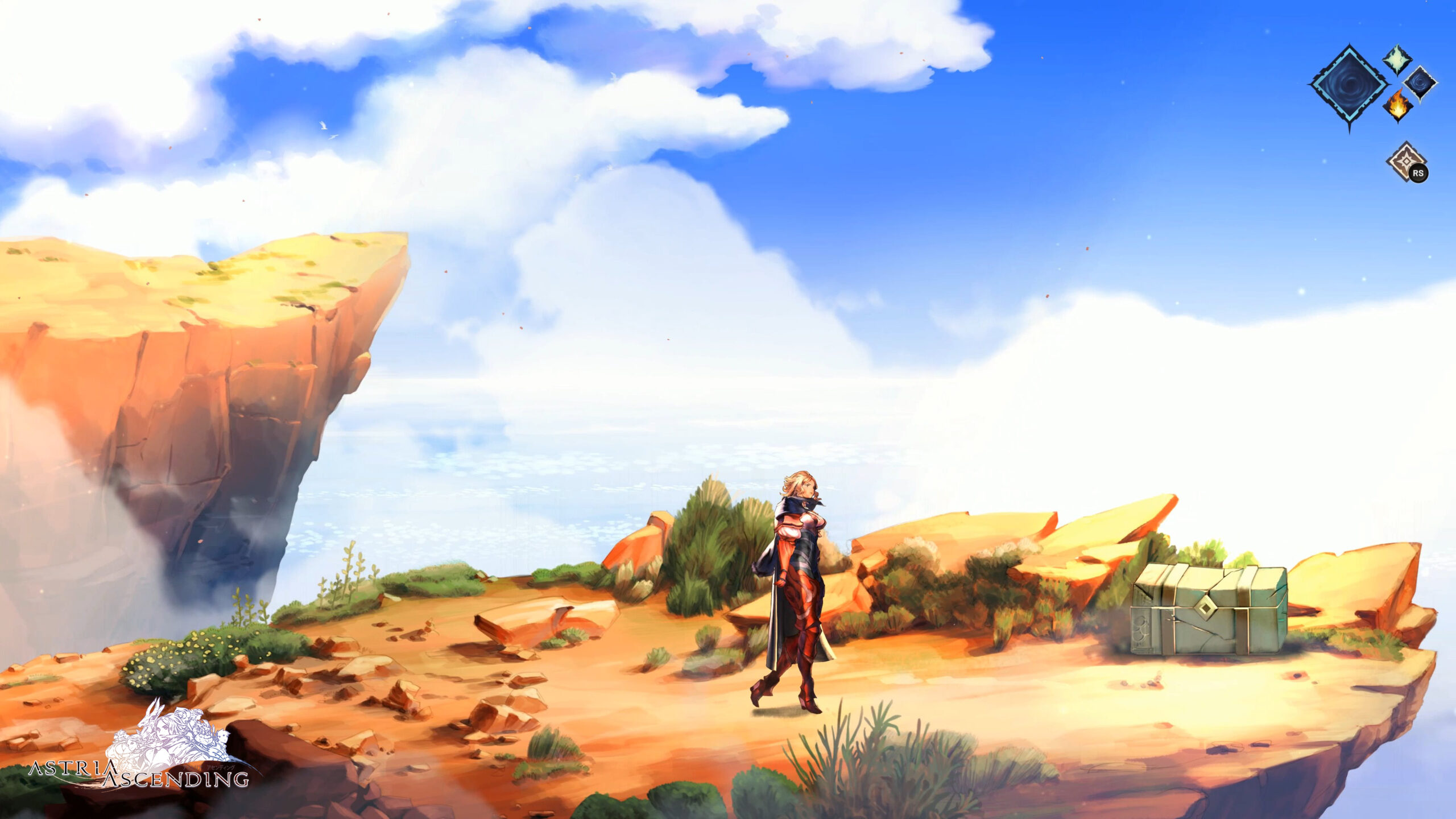 In the end, Astria Ascending is a decidedly fine game. While not without their moments, the story, characters and environments are largely forgettable, but the game does, at least, balance that out with excellent visuals and music and a solid combat system. It’s also easier to forgive Astria Ascending‘s flaws knowing that it’s the second game from a small team of around 20 people. As long as you don’t go in expecting a Final Fantasy-level experience, you’ll get a decent level of enjoyment out of Astria Ascending.

Astria Ascending is now available on PlayStation 4/5, Xbox One/Series X and S, Nintendo Switch and PC. The game is also available on Game Pass for Console, PC and the Cloud.