Vanguard weapons and the Caldera map mark a new era for Call of Duty: Warzone

For two and a half years, Call of Duty: Warzone has been a behemoth in the battle royale space. The free-to-play, large-scale, competitive offshoot of the core Call of Duty franchise has stood on its own against the likes of Fortnite and Apex Legends.

This past week, Raven Software, alongside Sledgehammer Games, Beenox, Toys for Bob, and High Moon Studios, have launched Season 1 of Call of Duty: Vanguard. Upon the debut of the new season, Raven Software released Warzone Pacific, the biggest update the battle royale has ever seen.

Since March 2020, Warzone has attracted a player base of well over 100 million. It’s also become a money-making machine for publisher Activision. However, as time passed, criticisms over the game intensified. A tumultuous development cycle during the pandemic delayed the game’s Versansk ‘84 map from launching alongside Call of Duty: Cold War. Upon launch, the map was only a temporary solution to what players wanted to see. The community has also been vocal in pointing out the lack of meaningful events, constant bugs, and desire to see anti-cheat support. However, despite all of this, Warzone persevered.

“Caldera feels and looks like an entirely new playground for players to explore. The map is brightly lit with a more vivid colour pallet filled with greens, tans, and browns.”

The Warzone Pacific update has been anticipated for quite some time as it looked to rectify many of the issues that bogged down the game for quite some time. It promised a full integration of Vanguard’s WWII weapons, Operators, and the brand new Caldera map. This has been uncharted territory for Warzone. The Cold War integration was impacted by development woes.

This meant a gradual shift from Modern Warfare’s weapon meta and Verdansk map to the focus on Cold War content. The Vanguard integration happened all at once, making it more dramatic for players. 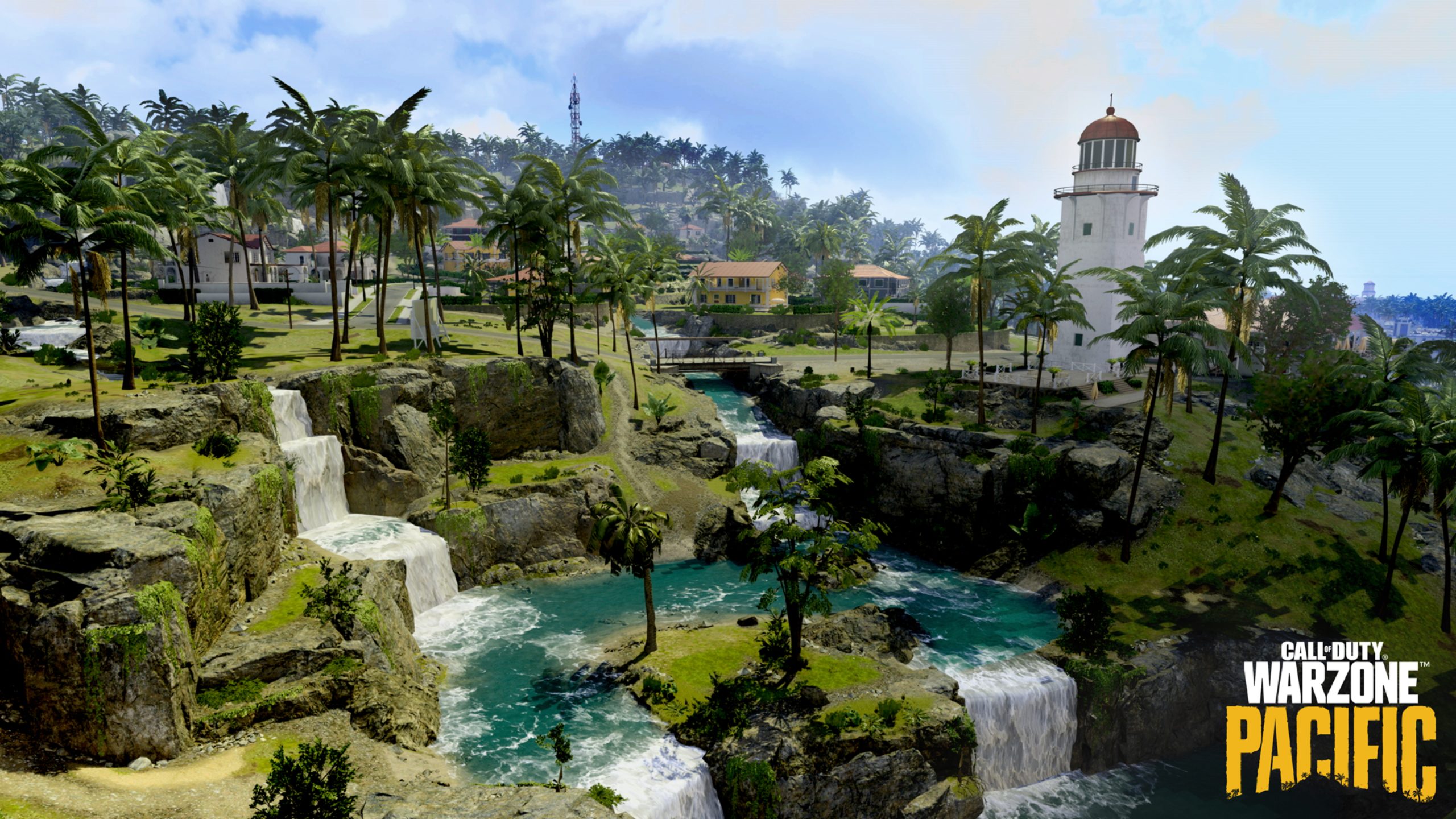 Warzone Pacific has replaced Verdansk entirely with the new Caldera map. Caldera feels and looks like an entirely new playground for players to explore. The map is brightly lit with a more vivid colour pallet filled with greens, tans, and browns. While staying roughly the same size as Verdansk, there are a handful of really interesting points of interest including the volcano located in the middle of the map. Additionally, Caldera is home to a beach-side resort, cavernous ruins, and a capital city.

The introduction of a map, by virtue, is exciting for many players, including myself. The differences from core Verdansk to Cold War’s Verdansk ‘84 were minimal. After over two years, I needed change. I knew the corners of Verdansk like it was a second home. Being in Caldera, my team and I are fish out of water. Call of Duty: Warzone has become interesting as my curiosity is now peaked, leading me to discover every nook and cranny of the map. This hard reset has demolished all high-level map knowledge. However, half the fun is learning about hop-ups, flank areas, and POIs to get the drop on other teams. The bulk of congested locations in Caldera is littered on the outskirts of the map. Whereas the open fields are all in the middle. This causes a drastic shift in gameplay momentum, depending on where each circle closes in on.

“Joining the evergrowing list of Modern Warfare and Cold War guns are the new Vanguard-exclusive weapons. The addition of these guns has of course completely changed the meta.”

The second big note from the Vanguard integration is the implementation of the new weapons. Joining the ever-growing list of Modern Warfare and Cold War guns are the new Vanguard-exclusive guns. The addition of these guns has, of course, completely changed the meta. Whereas the Mac10, Kar98, EM2 had their rather long moment in the spotlight, the Call of Duty: Warzone meta has been shaken up. Since Vanguard’s launch, it’s been a race to level up each gun, unlock attachments and perks in case the meta shifted in one way or another. It’s a compelling loop for dedicated players to keep up with the meta to give them the competitive edge. It’s long been stagnant, but Warzone Pacific has finally stirred the pot. 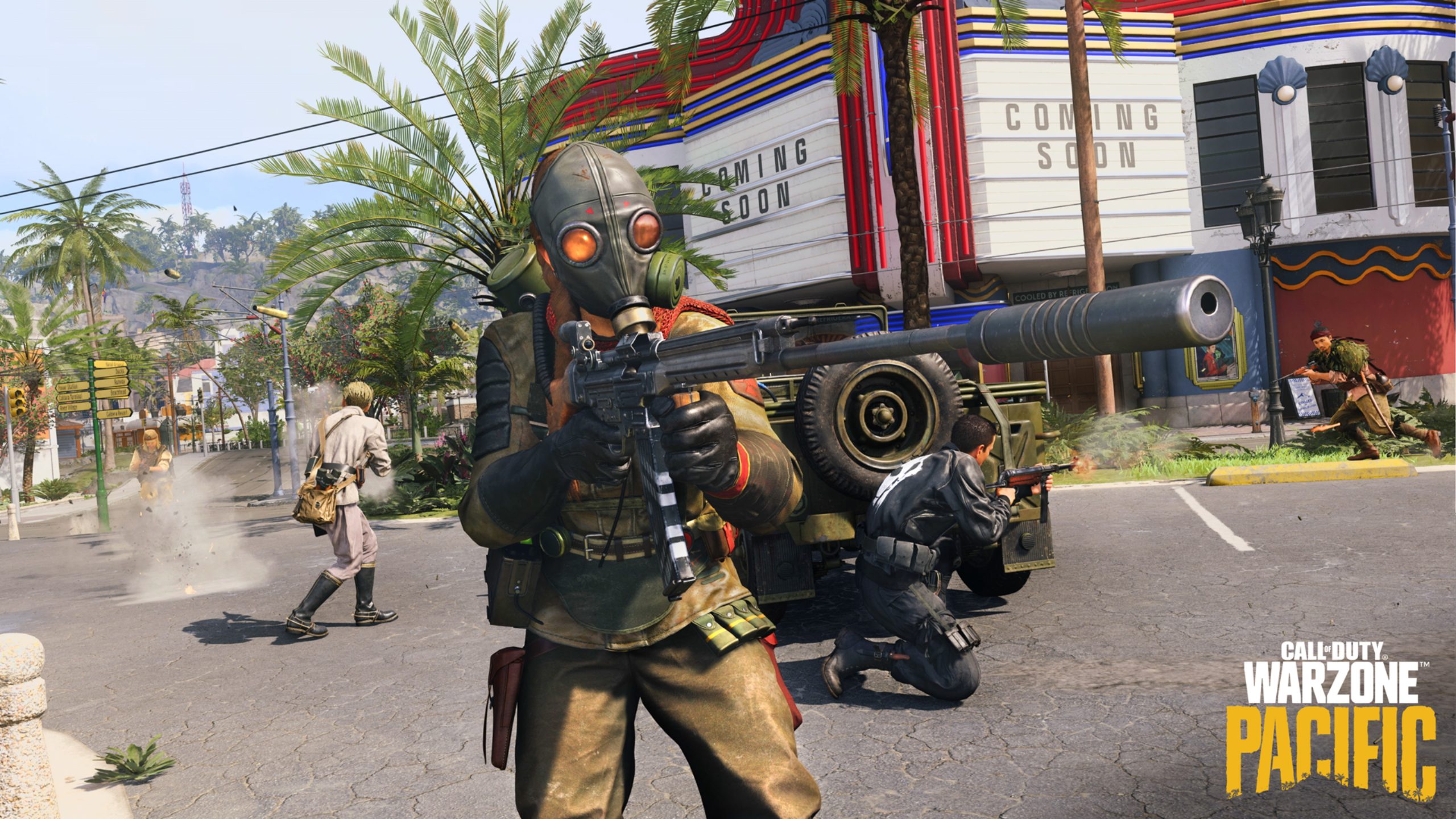 Along with a new map and a plethora of new toys to play with, Warzone Pacific is now home to the Vanguard Royale mode. While still supporting the true battle royale experience with all guns, skins, etc., Vanguard Royale is exclusive to Vanguard content. Here, players land in Caldera with access to only Vanguard ground loot and loadouts containing the WWII-inspired weapons. Additionally, this mode features small planes that can be piloted for some riveting dogfights in the skies. While I still prefer the true battle royale experience with all my previous work carrying over, Vanguard Royale is a cool addition and as Call of Duty: Warzone grows more and more, this is a great way for Raven Software to not worry so much about balance and offer a more linear gameplay experience.

Raven Software and associated studios have also added small quality of life and gameplay changes to Warzone Pacific. Now, across Caldera, players can find small gas canisters. These can be thrown at an enemy team or in an area and ignited to cause some damage. They can also be attached to a zipline and propelled up to hit camping players. It’s a novel new tool that doesn’t dramatically shift the gameplay but makes for some interesting plays. On top of that, new contracts and activities can be completed for in-game cash.

The biggest change is when teams are now able to purchase their loadouts. Rather than being able to scramble for $10,000 and purchasing a loadout drop before others, teams are restricted until the first free loadout drops at the end of the first circle. This slows down the momentum of the game, drastically changing the pacing. It’s taken me some getting used to but I think I enjoy the more laid-back start to the match now. 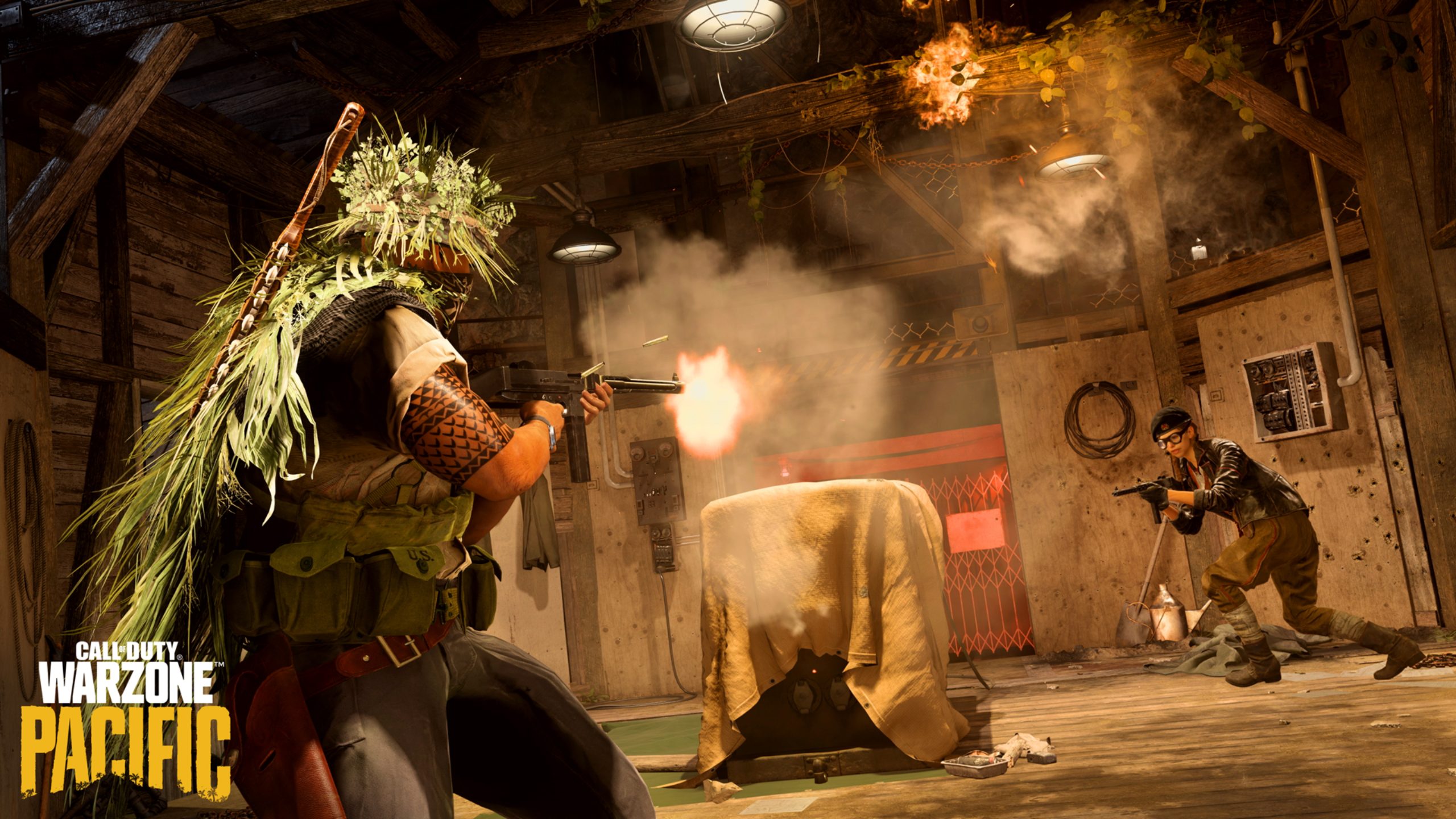 With all this comes the long-awaited, long-requested anti-cheat system. Activision’s Ricochet Anti-Cheat is now active and is a kernel-level baseline to help detect and rid the game of hackers and cheaters. Now, this was an issue that was plaguing PC players more than consoles, but hackers could still disrupt the fun for someone like me on Xbox Series X. Though, those occasions were fewer and far between. With that said, I’m not the authority to state whether Ricochet has made Warzone the hacker-free platform that all players were hoping to achieve. However, based on anecdotal evidence, the number of hackers seemed to have noticeably dwindled on PC.

“The fresh content and anti-cheat are steps in the right direction and will help retain players especially with the likes of Halo Infinite.”

The current state of Call of Duty: Warzone is looking bright but Activision and Raven Software can’t sit comfortably for too long. The fresh content and anti-cheat are steps in the right direction and will help retain players especially with the likes of Halo Infinite. However, there are inherent performance issues, especially on consoles. Texture pop-ins and render distance issues need to be addressed soon as it is affecting the game. We also need to see proof of meaningful events and map changes throughout the seasons. The first in-game event ‘Festive Fervor’ was just announced with holiday-specific activities. I’m curious to see what else players will see in the coming months.

If Raven Software can keep this momentum and listen to community feedback, Warzone Pacific can mark a new high for the community. As with any free-to-play platform, communication and incentives to return will determine how this new era will unfold.

Note: Activision Blizzard is currently under investigation by the state of California in relation to allegations of sexual harassment and other kinds of mistreatment of workers. A timeline of reported events can be found here.