OnePlus has released an updated pair of earbuds in its ‘Z’ line called the OnePlus Buds Z2 that promise more battery life and active noise cancellation.

I’ve been testing the earbuds for the past few days and will have a full review in the coming weeks. But for now, I’ll say that they sound good, the noise cancellation seems average, and they feel very similar to the OnePlus Buds Z from last year. So far, I have no major complaints, but I’ve yet to compare them to the previous model and key competitors. That said, for the low price of $150, the value the Z2s offer is difficult to beat.

There’s a decent amount to get excited about on the spec sheet, including standard OnePlus fast charging. This time the company says that a 10-minute charge (on a certified charger) offers five hours of listening time. However, that’s not even the most impressive battery stat because with the case, you can use the buds for 38 hours, according to the company. This is incredibly long and might make these the perfect earbuds for people that are away from power for a long time.

They’re also been equipped with Bluetooth 5.2 and can use Google Fast Pair, so the initial connection to most Android phones is fairly seamless. If you’re a OnePlus user, you also get a few additional perks, including the ability to customize the touch controls and noise cancellation levels without downloading the third-party HeyMelody app. 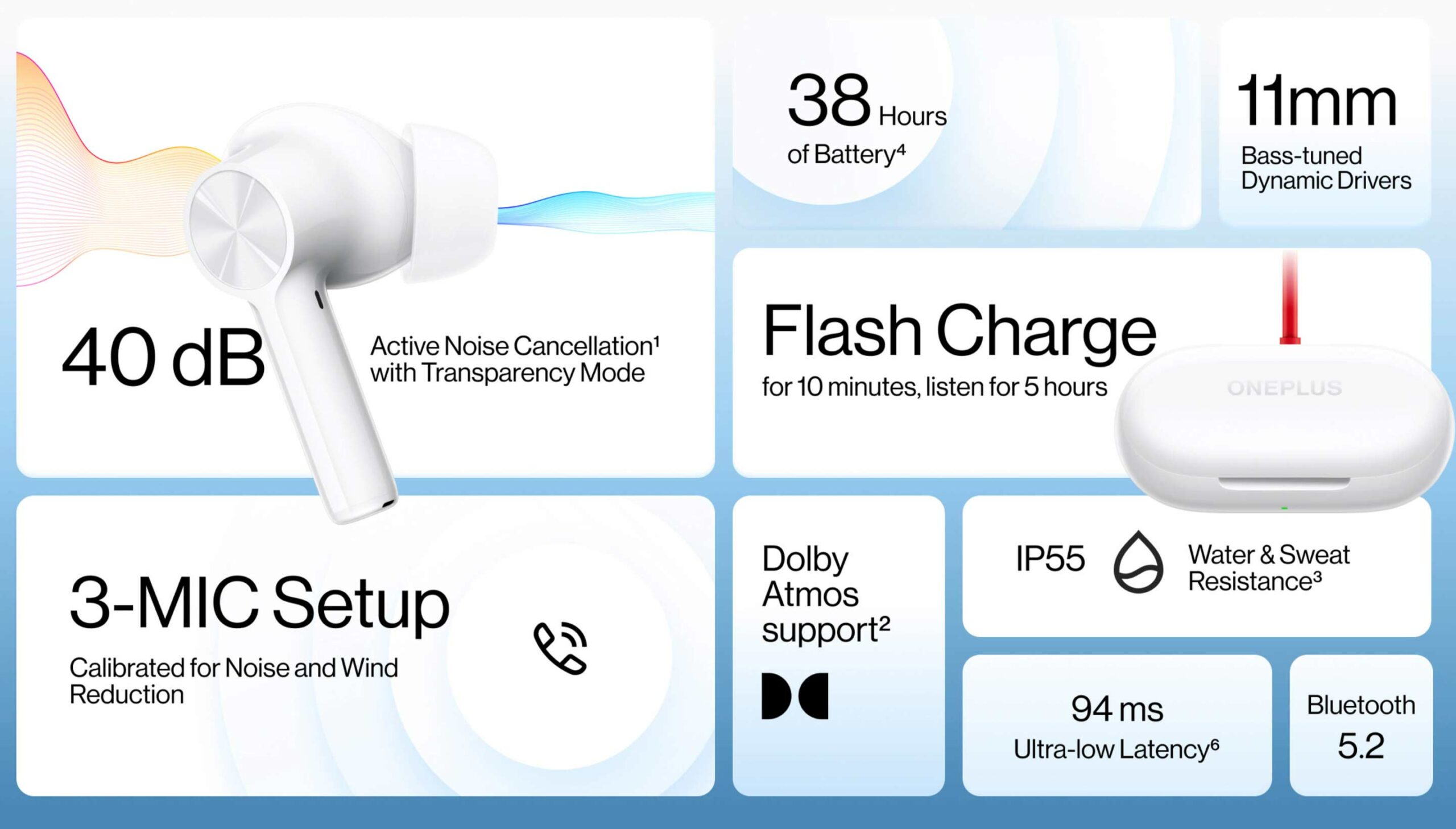 OnePlus also promises better call quality and reduced audio latency down to 94ms. The Z2s are also certified to support Dolby Atmos, but with Apple Music, the effect isn’t as noticeable as Apple’s AirPods with head tracking. It’s still nice, though, and I’ll have more TV show and movie impressions in the full review.

OnePlus says that its noise cancellation can block sounds up to 40dB and in my testing, I can’t hear my fingers on my Macbook keyboard or other ambient sounds. The Buds Z2 are decent at lowering the volume on human voices too, but as with most earbuds, the noise cancellation isn’t groundbreaking.

Other specs include IP55 water/dust-proofing to help the earbuds withstand rain. The case also offers an IPX4 rating, allowing it to handle minimal splashing as well.

So far, OnePlus’ new Z2s sound pretty good, right? Well, there’s a catch — at least for now. Alongside the new earbuds, OnePlus has brought its Red Cable Club to North America. Anyone can sign up for free, but you need to join to buy the earbuds since OnePlus has decided to make them Red Cable Club exclusive.

Everyone starts as a Red Cable Club Explorer, but you can rank up to Elite status by performing a few annoying tasks like subscribing to OnePlus’ newsletters and registering your account. The main way to gain points is to buy OnePlus products. It appears that $1 equals one point. You need over 3,500 points to hit elite status, which only nets you $40 off purchases over $300. Overall, this is a pretty paltry rewards program, but since I assume most OnePlus phone users probably already have a OnePlus account, this isn’t that significant of an issue.

If you want to pick up a pair of the Buds Z2, OnePlus is selling them for $149 to Red Cable Club members only. The company also says that there is a limited quantity of 1,000. If these earbuds sell out, I expect OnePlus to drop more. The company appears to be adopting a similar strategy to ‘Nothing’s’ by releasing with significant hype and exclusivity behind them.