The latest mouse from Logitech’s gaming lineup, available for $199.99 at Best Buy. is the lightest mouse I’ve ever used by a long shot. Of course, weight isn’t everything, but this mouse has plenty of tricks up its sleeve to back up its main selling point.

Unless you’re strolling down to your local electronics store and grabbing the cheapest mouse off the shelf, choosing a mouse can be difficult. Selecting the right one for your needs is essential. Having a mouse that fits your hand can be the difference between wrist strain and enemies slain. And even if you’re not using your mouse for competitive gaming, it’s still an accessory that will be used every single day. In other words, it’s worth spending a bit of extra time and money for your best mouse.

Is the Logitech G Pro X Superlight that mouse? For many people, I’d say yes.

Though its name is stuffed with a lot of random letters and descriptors, the Logitech G Pro X Superlight has actually been stripped down to the bare essentials.

The Logitech G Pr — you know what? — I’m just going to call it the Superlight.

The Superlight is almost an exact replica of the original G Pro mouse with a few key differences. Aesthetically speaking, the new design forgoes the RGB lighting. But the major changes come under the hood.

While the G Pro had removable thumb buttons on both sides, the Superlight opts for permanent thumb buttons on the left side. While not a major issue for right-handed users like me, this could be a dealbreaker for others. The ambidextrous design of the G Pro series is one of its major selling points. 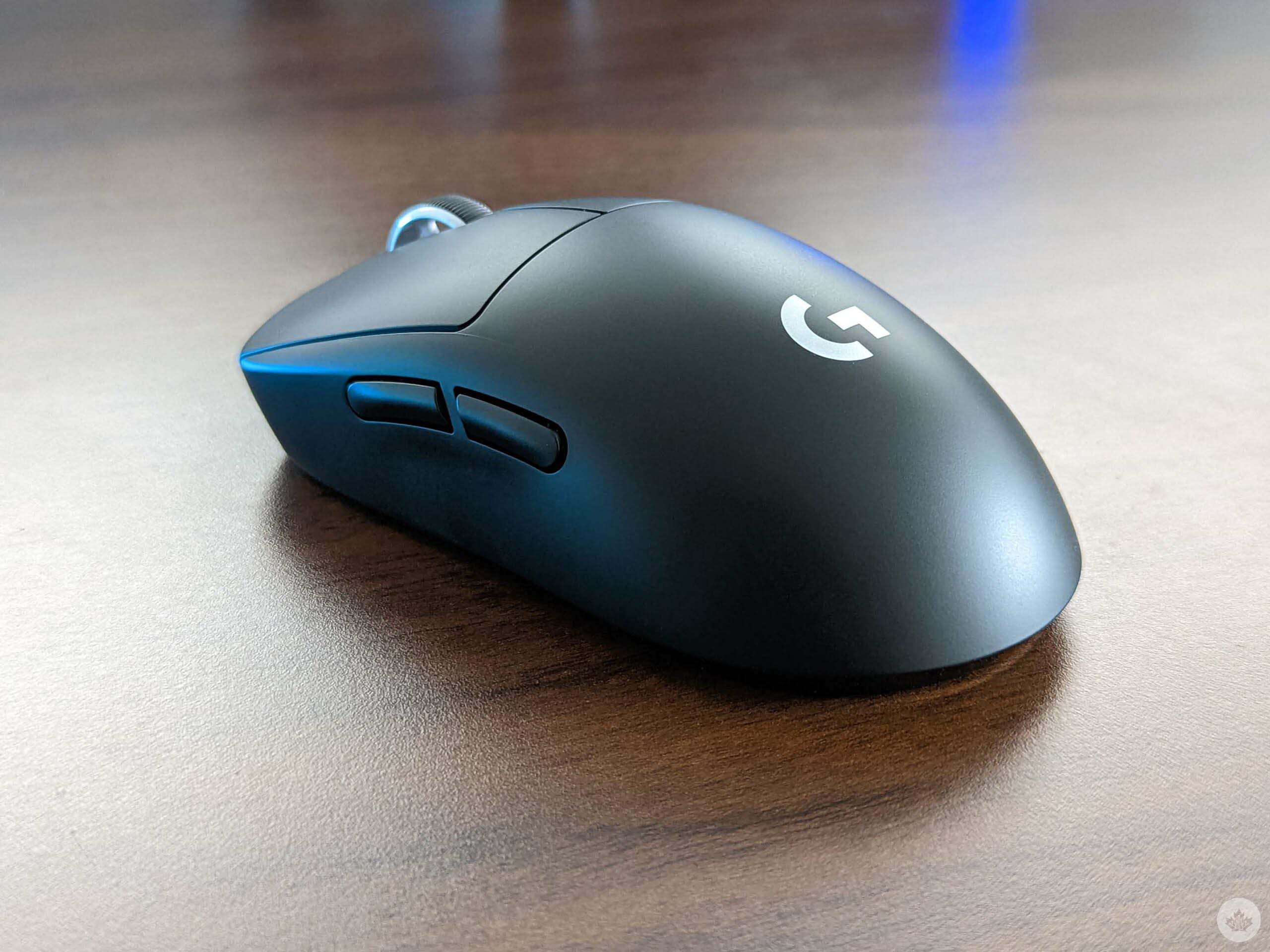 In terms of shape, the mouse has a low-arch dome design. It has five buttons in total, with the two thumb buttons on the left side and a clickable scroll wheel, in addition to the two primary buttons. It has a clean, black design—also available in white—with the silver Logitech emblem on the rear of the shell and white on the sides of the scroll wheel. It’s about as nondescript as gaming mice come.

And that seems to be the philosophy behind the Superlight. This is a mouse designed for users who want the most straightforward user experience possible. You won’t find a customizable scroll wheel, RGB lighting, adjustable sizing, or removable thumb buttons, but those features have been traded for pure performance.

Gliding to the head of the pack

So how light is the Superlight. At just over 60 grams, the mouse has managed to shave 20 grams off of the G Pro Wireless. And that was already considered a light mouse for its size. That may not sound like much, but they feel completely different in your hand.

You might have also noticed that the mouse doesn’t have a perforated shell. In the past, mouse manufacturers managed to shave off extra weight by reducing the amount of plastic. Not only does the Superlight have a full-shell design, but it’s also wireless. It defies all logic.

The base of the mouse has two built-in PTE feet for smooth gliding, as well as an additional replacement PTE panel. While not as smooth as after-market feet, they’re right up there with Razer for the best stock pads you can buy. This rodent glides like it’s on ice. 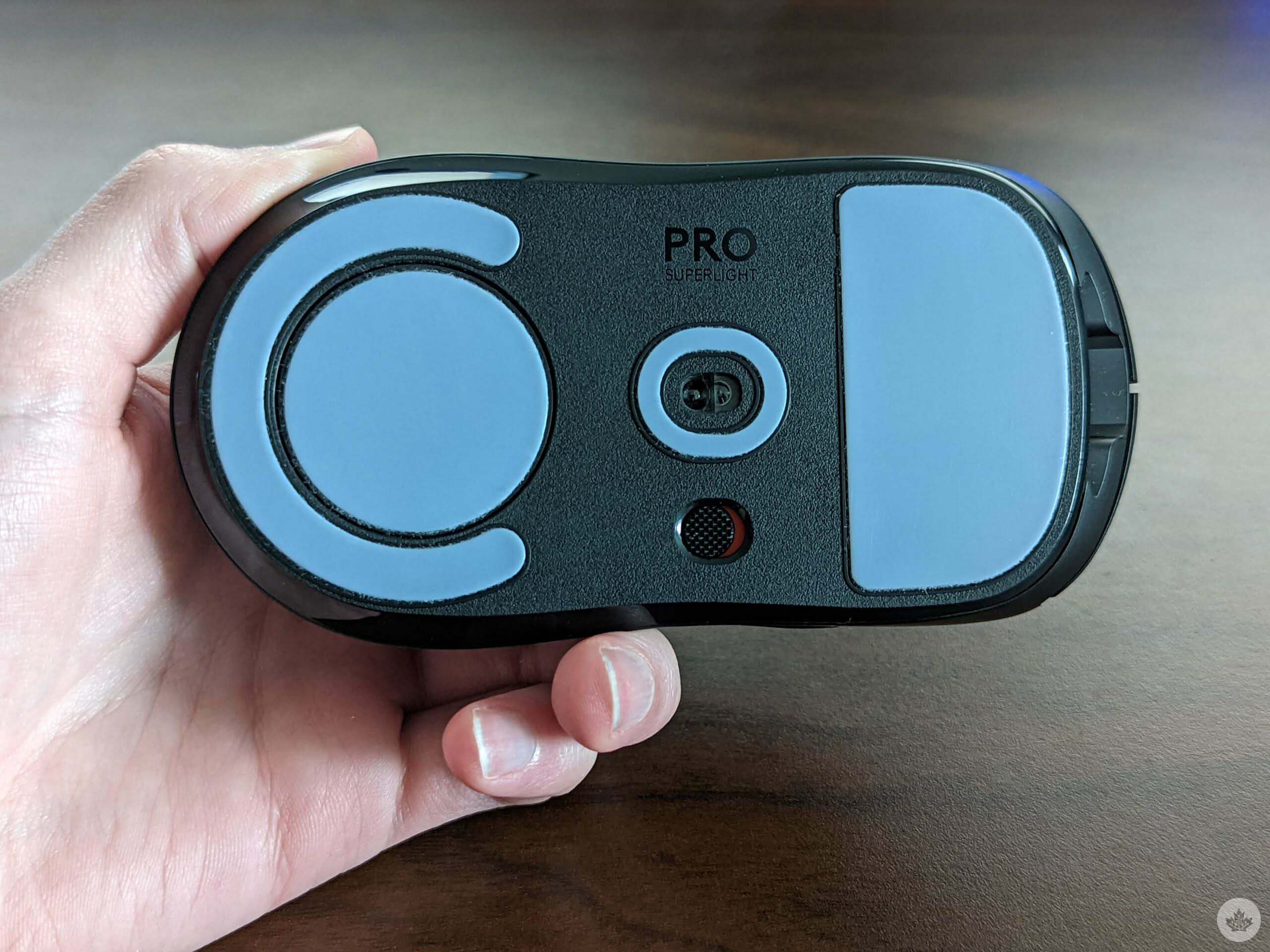 With the release of Halo Infinite, I’ve been putting in more than my share of hours with the mouse. And that’s where I noticed the biggest difference.

The Superlight was so smooth that  I was actually overshooting all of my targets.  After the initial adjustment period, I found myself picking the Superlight up over my usual mice purely for how weightless it felt in my hand. Now I can’t go back.

Not everything is perfect with the feel of the Superlight though.

Where does it fit?

Mouse users can largely be categorized by three types of grip: palm, claw, and fingertip. I fall into the latter, which is why I usually prefer smaller mice. The Logitech G305 is my everyday work mouse, while I switch between the Razer Viper and the Zowie S2 for gaming. Users that prefer an ergonomic or palm grip usually gravitate towards larger mice. And depending on your hand size, claw grip users often fall somewhere in the middle.

I’d describe the Superlight as a medium-sized mouse. Initially I found it to be too large for my preferred grip. I personally skew towards small mice, with my favourite shape being the G305. After using it for two weeks, though, I can easily use it for hours on end without feeling fatigued. And that all comes down to its weight.

For users going in the other direction, that may be a bigger hurdle to overcome. When compared to the Razer DeathAdder—as seen in the image below—it’s far smaller, both in terms of its height and width. Its arch isn’t exaggerated enough to be considered ergonomic, but that’s because it’s meant to fit as many hands as possible. 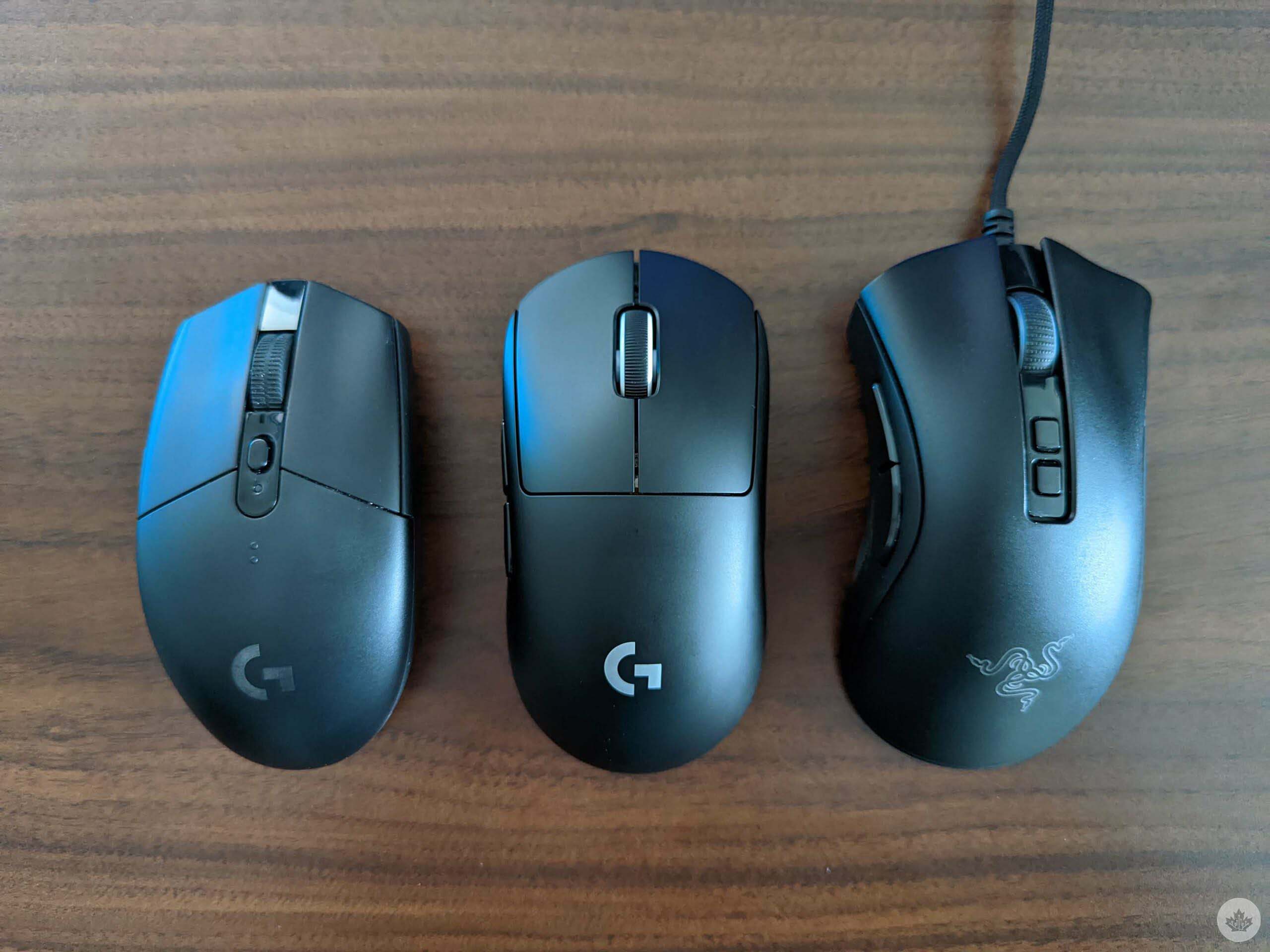 This mouse will definitely reduce strain on your wrist if you use your mouse a lot for work. However, if you’re working in an office, the mouse is anything but quiet. The mechanical click of the buttons is satisfying, though probably less satisfying for your co-workers.

For gaming purposes, the buttons are extremely precise, with low travel and a pleasing tactile response. The scroll wheel is also responsive, even if the tactile feedback is a little too subtle, and the spacing is a little too wide. The click of the scroll wheel button is one of the best I’ve felt though. It almost matches the feeling of the primary buttons.

Unfortunately, the Superlight stumbles when it comes to the side buttons. I program my thumb buttons to do everything from switching weapons in games to navigating pages when browsing the internet. And these just don’t cut it.

The buttons feel unresponsive. How does one describe the feel of a button that travels too far? Mushy? Squishy? Spongy? They’re not the worst I’ve felt, but on a mouse that’s as excellent as this, they’re the obvious weak point.

If I had any other complaints, I’d have loved to see a physical DPI switch on the mouse. The Logitech G Hub software is great, but it can’t replace being able to switch on the fly with a single click.

Considering the lightweight design, the battery life on the Superlight is phenomenal. It gets 70 hours on a single charge. In two weeks of use, my battery is still at 40%. And it’s rechargeable!

Though you can plug the mouse directly into your PC, I’d suggest using it wirelessly when possible. The included cable is stiff, adding significant drag to a mouse that’s designed to glide across your desk mat.

And I’m not a professional-level player by any means, but the latency while using the mouse wireless was nearly imperceptible.

It’s also worth mentioning the Hero sensor that’s standard on all of Logitech’s latest high-end gaming mice. It continues to compete with brands such as Razer for the best sensor on the market with its 25K sensitivity. If I could ask for one thing, I’d like to see them increase the polling rate in the future. At a report rate of 1000Hz, it’s in line with other gaming mice. We’re starting to see polling rates of 8000Hz though, so I’d expect a mouse at of this price to push further in that direction.

And that’s the last thing that I should address. The price.

The Logitech G Pro X Superlight isn’t going to be for everyone, but after two weeks of using it, it’s going to be difficult for me to put this mouse aside for mice that weigh 80 or even 90 grams.

Even if it’s not perfect, it feels inherently different from other mice I’ve used thanks to its weight and design.

There are areas that it could improve, but honestly, I hope that Logitech applies the same magic they’ve accomplished with this mouse to their entire lineup.

You can buy the Logitech G Pro X Superlight at Best Buy Canada.

MobileSyrup utilizes affiliate partnerships and publishes sponsored posts. These partnerships do not influence our editorial content, though MobileSyrup may earn a commission on purchases made via these links.