With the reveal of Samsung’s new Galaxy Tab S8 lineup, it doesn’t look like the South Korean tech giant is giving up on the tablet space anytime soon.

There are three tablets in the new lineup: the Tab S8, the Tab S8+ and the Tab S8 Ultra. All three devices will be available to pre-order in Canada today, February 9th, alongside the new Galaxy S22 series of smartphones.

Samsung is also including a free keyboard cover and Galaxy Buds 2 with pre-orders through its website.

Overall, the Tab S8 line promises to be one of Samsung’s more exciting lineups in the tablet space given the wide variety of sizes that are offered this year. 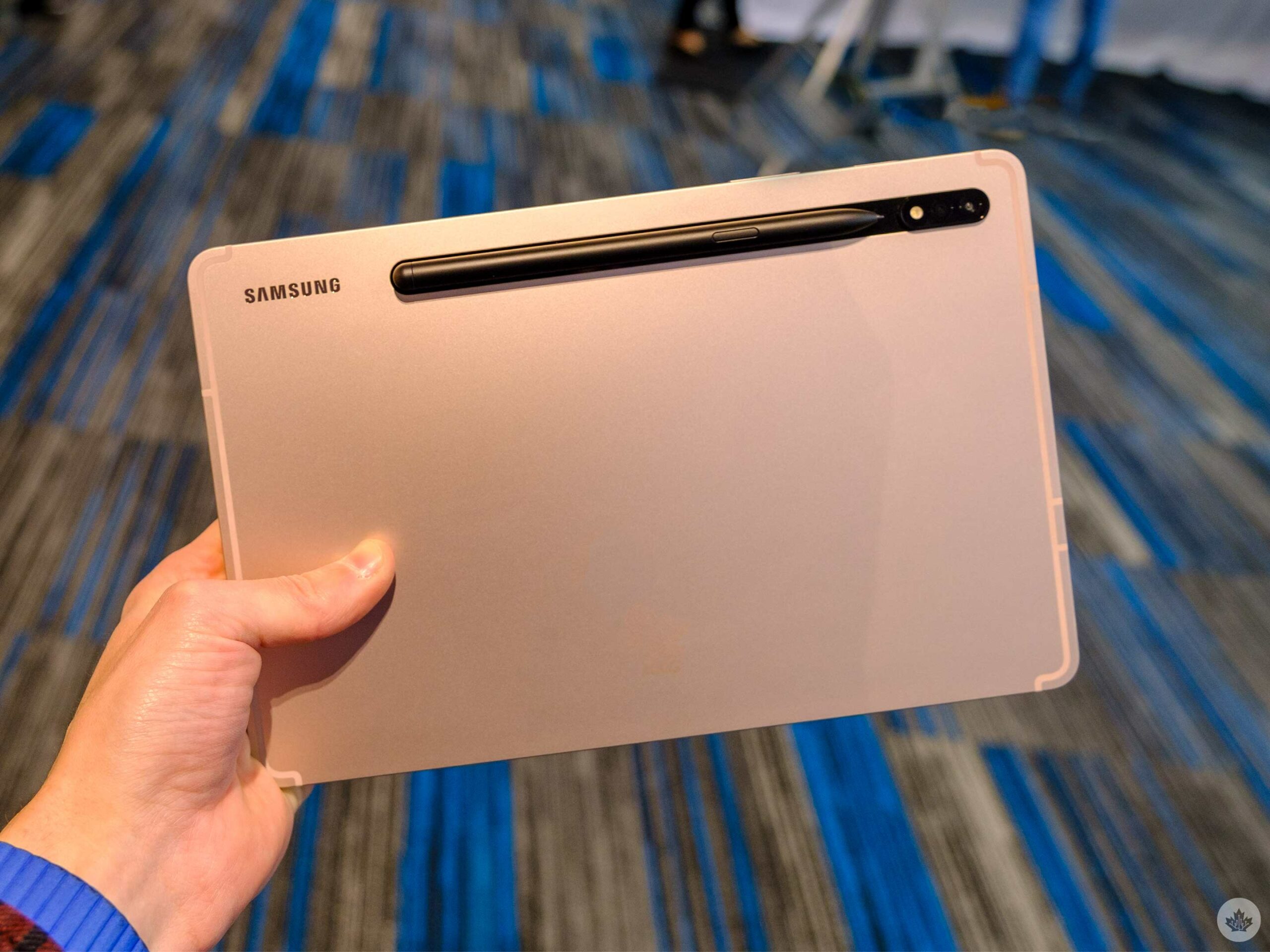 The Tab S8 is the smallest of the three tablets with an 11-inch display and a 2560 x 1600 pixel resolution. On the other hand, the mid-sized Tab S8+ features a 12.4-inch screen with a 2800 x 1752  pixel resolution AMOLED display. Both tablets offer an adaptive refresh rate that can go all the way up to 120Hz.

Since the Tab S8 is the smallest,  it’s also the lightest at 503g, making it a little heavier than a 480g entry-level iPad. Considering the fact that it packs a larger screen, this makes sense. I’ve used a few 11-inch Samsung tablets in the past, and it’s a really great size for a media consumption device. Samsung’s Tab S8+ weighs 567g.

All three Tab S8 series tablets feature two cameras on the rear, including a 13-megapixel main shooter and a 6-megapixel ultrawide. The two mid-range tablets offer a single 12-megapixel ultrawide sensor on the front, which Samsung says is designed for video calls. There are also three mics in all three tablets, including the Tab S8 Ultra. 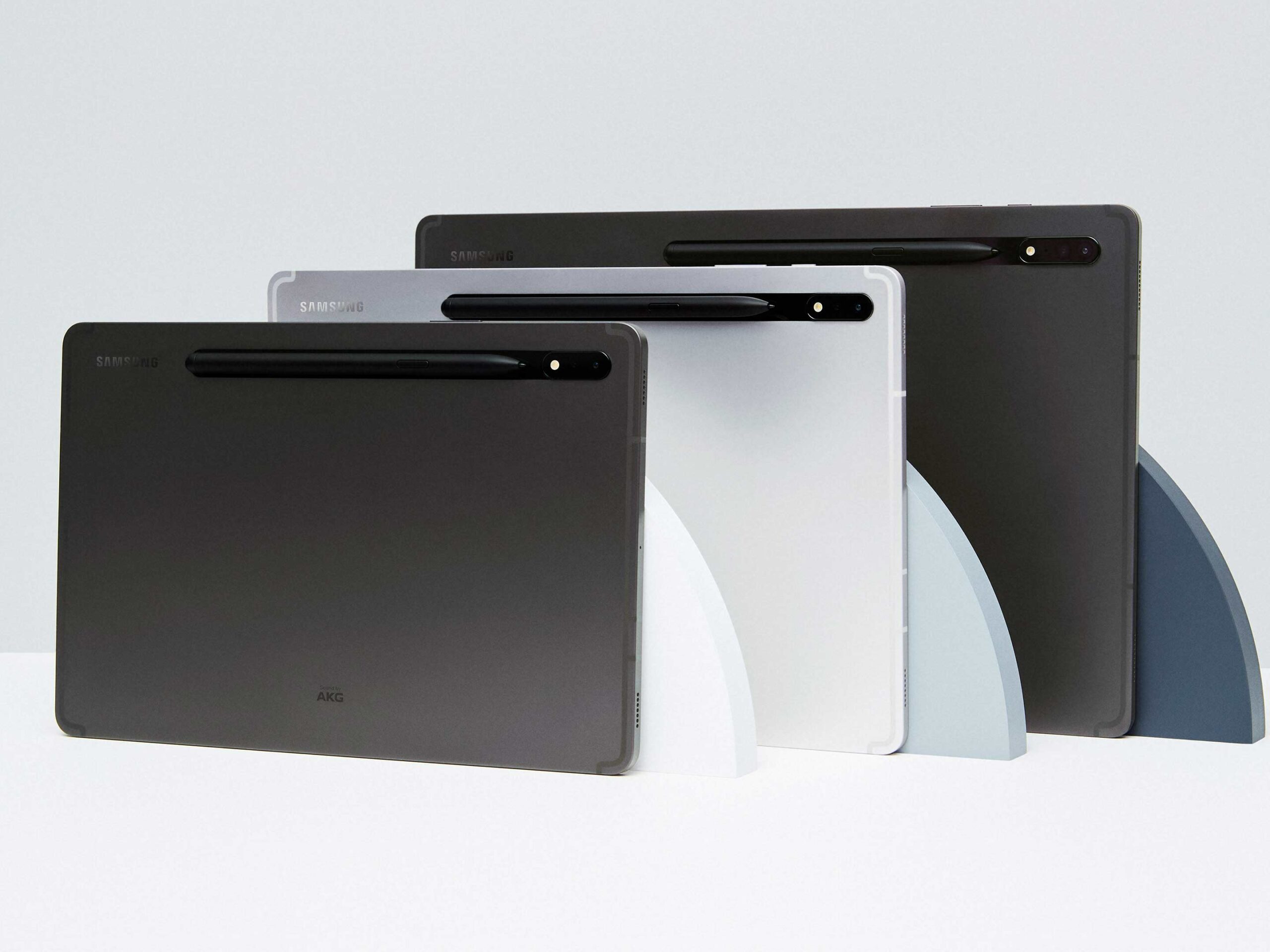 Both tablets feature 8GB of RAM and either 128GB or 256GB of internal storage. However, Samsung says that storage can expand to up to 1TB with a MicroSD card. In the battery department, both tablets are capable of 45W charging and should last for a day or more of typical use. The Tab S8 has an 8,000mAh cell, while the Tab S8+ has a 10,090mAh battery.

Samsung’s press release says that the tablets pack a 4nm octa-core chip. I’d expect the processor to be a Snapdragon 8 Gen 1, but as of right now, that remains unclear.

The smaller Tab S8 features a fingerprint reader built into the side of the tablet. On the other hand, the Tab S8+ has an in-display reader.

Both tablets also come with a Samsung S Pen in the box but don’t include a charger. Further, only the Tab S8+ comes with the new Samsung S Pen with reduced latency. Both devices feature small magnetic pads on the back to stick the stylus to. 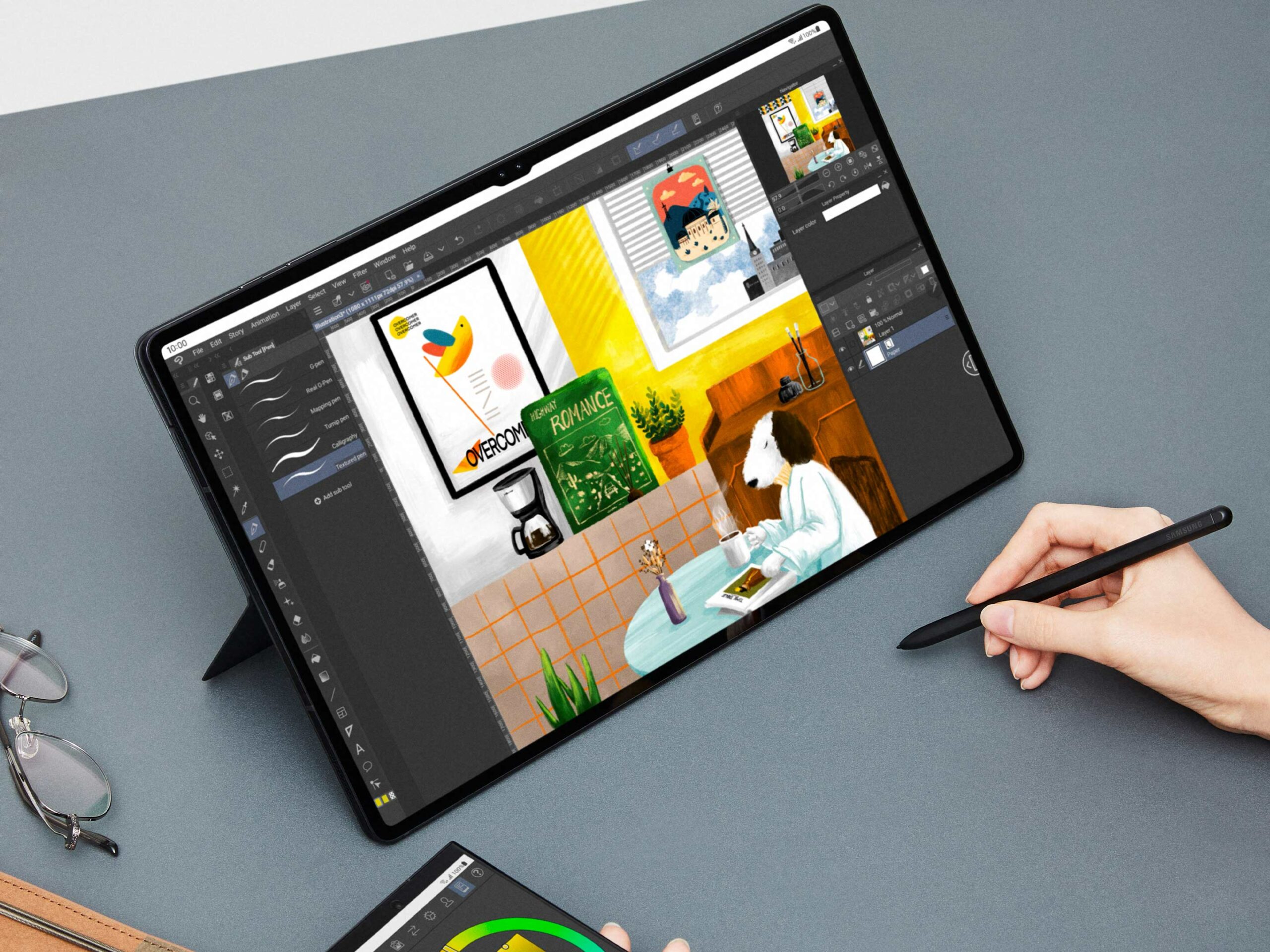 In a surprise move this year, Samsung has also dropped a tablet that’s bigger than Apple’s new MacBook Pro. The Galaxy Tab S8 Ultra features a 14.6-inch Super AMOLED display with a 2960 x 1848 pixel resolution and a 120Hz refresh rate.

The S8 Ultra is, of course, the heaviest of the three coming in at 726g. Like the other new tablets, this model features 13-megapixel and 6-megapixel cameras on the rear and a 12-megapixel ultrawide. To spice things up, the S8 Ultra also offers a 12-megapixel regular sensor. This means it has two selfie cameras and a little notch to house them in. Samsung says that the camera is capable of keeping you in frame when you move around during a call, similar to Apple’s Centre Stage.

The Tab S8 Ultra also comes with 12GB of RAM and 256GB of storage. Its internal storage can be expanded up to 1TB with a MicroSD card. This extra RAM should make it a bit more powerful than the other two tablets, but it features same 8-core chipset as its smaller counterparts.

Of course, since Tab S8 Ultra is bigger, it also includes a more expansive 11,200mAh cell. With the extra RAM and a larger screen, I’d expect it to last roughly as long as the other two tablets in Samsung’s 2022 lineup.

Unlike the other two tablets, the Tab S8 ultra comes in ‘Graphite.’ It also comes with the new S Pen in the box.

MobileSyrup utilizes affiliate partnerships. These partnerships do not influence our editorial content, though we may earn a commission on purchases made via these links that helps fund the journalism provided free on our website.