Samsung promotes its Members app with a banner depicting iPhones

Not one, not two, but all three of the phone layouts used in the banner depict an iPhone

Imagine Nike using Adidas shoes to promote its membership service — that would be abysmal.

Well, that’s exactly what happened when a Samsung employee in South Korea used an image layout of an iPhone to promote its Samsung Members app, as first reported by Android Authority.

An employee responsible for updating the Samsung Members app added a banner promoting Samsung themes, but the phone layout in the banner looks very similar to the iPhone X, including the device’s big bezels and recognizable notch. Users were quick to catch the mistake, with some even sharing screenshots of the error on Samsung’s Community Forum. 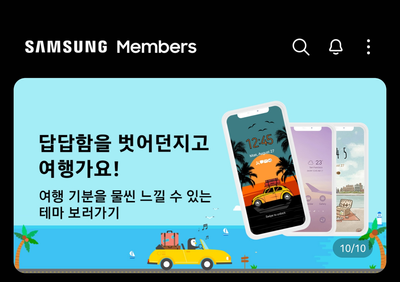 Not one, not two, but all three of the phone layouts used in the banner depict an iPhone.

“Android software on Apple phone haha,” read a comment under the thread, whereas a different one said, “It seems that there are some Samsung Electronics employees who do not use Samsung phones.” This, of course, isn’t a good look for Samsung. A representative of the company also commented on the thread saying, “The person in charge made a mistake in the process of modifying the design source file. The banner image will be modified and replaced today. Thank you for your interest in Galaxy service. We will try to provide better service.”

The banner was later redesigned to depict a Samsung device with a hole-punch camera, though the damage had already been done. This obviously won’t alter Samsung’s success going forward, but it would be prudent for such a large a company — arguably the largest smartphone manufacturer — to cross-check Tweets, banners and other promotional material before it goes live, similar to how my editor is about to read this story and tear up laughing.