Apple’s newest iPhones, the iPhone 6 and the iPhone 6 Plus, don’t arrive for another couple of days, but Apple is pushing iOS 8 live for current iPhone users today.

Unveiled earlier this summer and detailed at the iPhone 6 event, iOS 8 brings improvements to Messages (Tap to Talk, the ability to share several photos and videos at once, the ability to share your location, and enhancements to group messaging), as well as the Photos app (a wide variety of editing options), and predictive typing thanks to QuickType.

Totally new in iOS 8 is Apple’s Health platform, which gathers information from various different health apps and combines it in one place. The HealthKit API allows devs the ability to create apps capable of communicating with each other. There’s also HomeKit, which connects home devices, Family Sharing, for easier communication and sharing of iTunes purchases, and iCloud Drive, which adds the ability to store, access, and edit your documents from any of your devices. 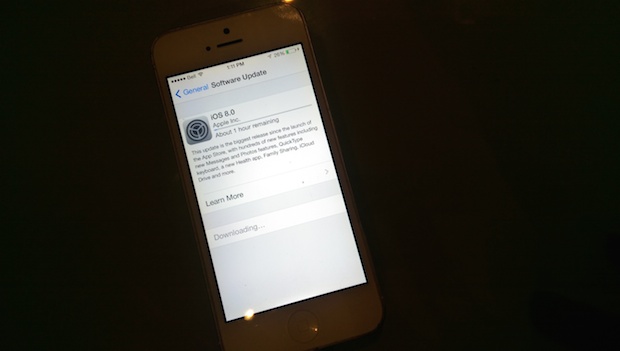 At roughly 1GB, this is the biggest iOS update yet, so those of you with 16 GB or even 32 GB iPhones might find yourself short of space. Apple says you’ll need 4.5 GB of space to install, so be sure to back everything up before you start removing pictures and videos to make room for this whopper of an update.