Galaxy Note 4 to arrive in Canada on October 17th?

Samsung’s flagship phablet, the Galaxy Note 4, arrived in South Korea last Friday with promised availability for a further 140 countries by the end of this month. Today, Samsung offered a bit more information on when specific markets can expect the device to launch.

Though the map above is a little bit hard to decipher, it looks like Canadians can expect the Galaxy Note 4 to land on October 17th. U.S. carriers have been taking pre-orders for the Note 4 since last month and have also listed an October 17th release date, so it’s possible the pink dot you see on the map above represents all of North America, as opposed to just Canada. 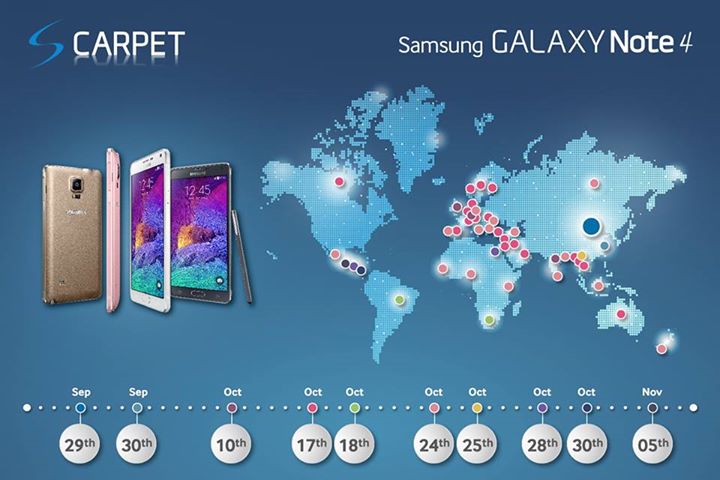 The Note 4 was announced at IFA in early September and made its debut in Korea last week after Samsung decided to move up the launch to better compete with the iPhone 6 Plus. Bell, Koodo Mobile, MTS, Rogers, SaskTel, TELUS, Videotron, WIND Mobile will all be carrying the Note 4 when it does finally arrive in Canada, though no one has offered any details on price or colour availability. Best Buy and Future Shop started taking pre-orders for the Note 4 last Friday.