The Xbox One X is now available in Canada.

Microsoft’s $599 CAD mid-generation update to the Xbox One plays all of the same games in addition to offering 4K and HDR gaming capabilities.

If you haven’t already, check out our review of the Xbox One X, which goes more in-depth about what the system is capable of doing and if it’s worth buying.

This feature, however, will look more at what you need to know before buying the console in terms of televisions, enhanced games and more.

Make sure you have the right TV 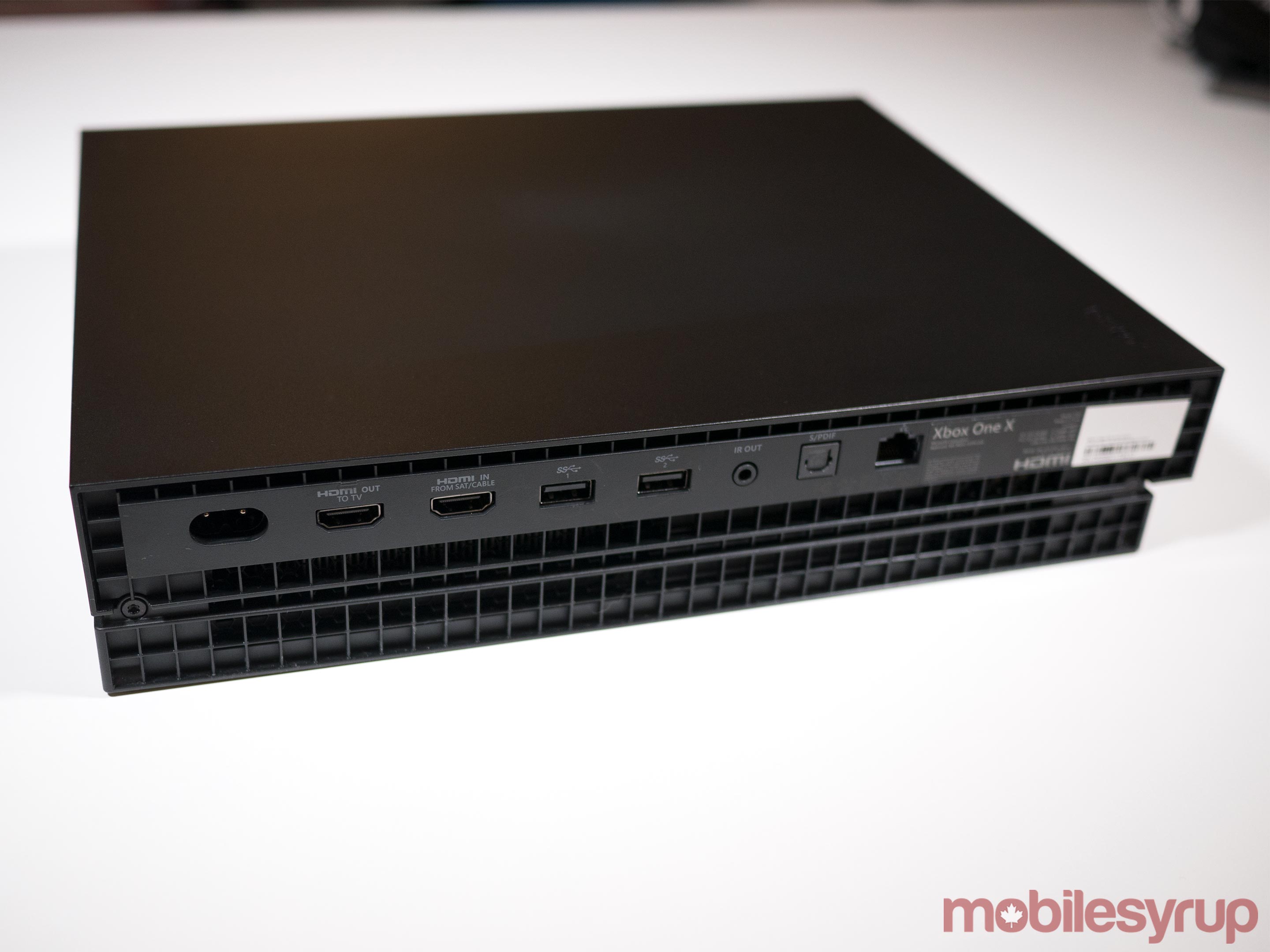 The Xbox One X is capable of running games in beautiful 4K visuals, as well as HDR (high dynamic range) imaging. The system can also play 4K Blu-rays and stream the selection of 4K media that’s available on Netflix.

Naturally, if you’re going to drop $600 CAD on a device, you’ll want to get as much out of the console as you possibly can. However, actually being able to do that isn’t so easy. It’s important to note that some manufacturers promote their TVs as featuring ‘true HDR’ visuals, but this is somewhat misleading regarding which type of HDR the models actually support.

The below video, produced by LG, helps illustrate the difference HDR makes in the overall picture quality.

For example, certain 2016 Samsung models, such as the UN49KU7000 (which I briefly owned), are listed as featuring ‘HDR Premium,’ but this is not the same as HDR10, the only standard of HDR that the Xbox One X supports. It’s also worth noting that the Xbox One X does not support Dolby Vision, the other competing HDR standard, with 4K Blu-rays or other content.

Thankfully, the Xbox One X has a very useful feature found in the display settings, wherein the console scans your TV and offers a checklist of all the 4K/HDR-related improvements your display can take advantage of. When I tried out the KU7000, I got a green checkmark for 4K resolution, but all HDR functions were unfortunately marked with red ‘X’s’ to indicate the TV didn’t support HDR10. In many ways, HDR is essential to getting the full visual experience, as the imaging format offers deeper colours and a richer contrast to offer the best picture possible. 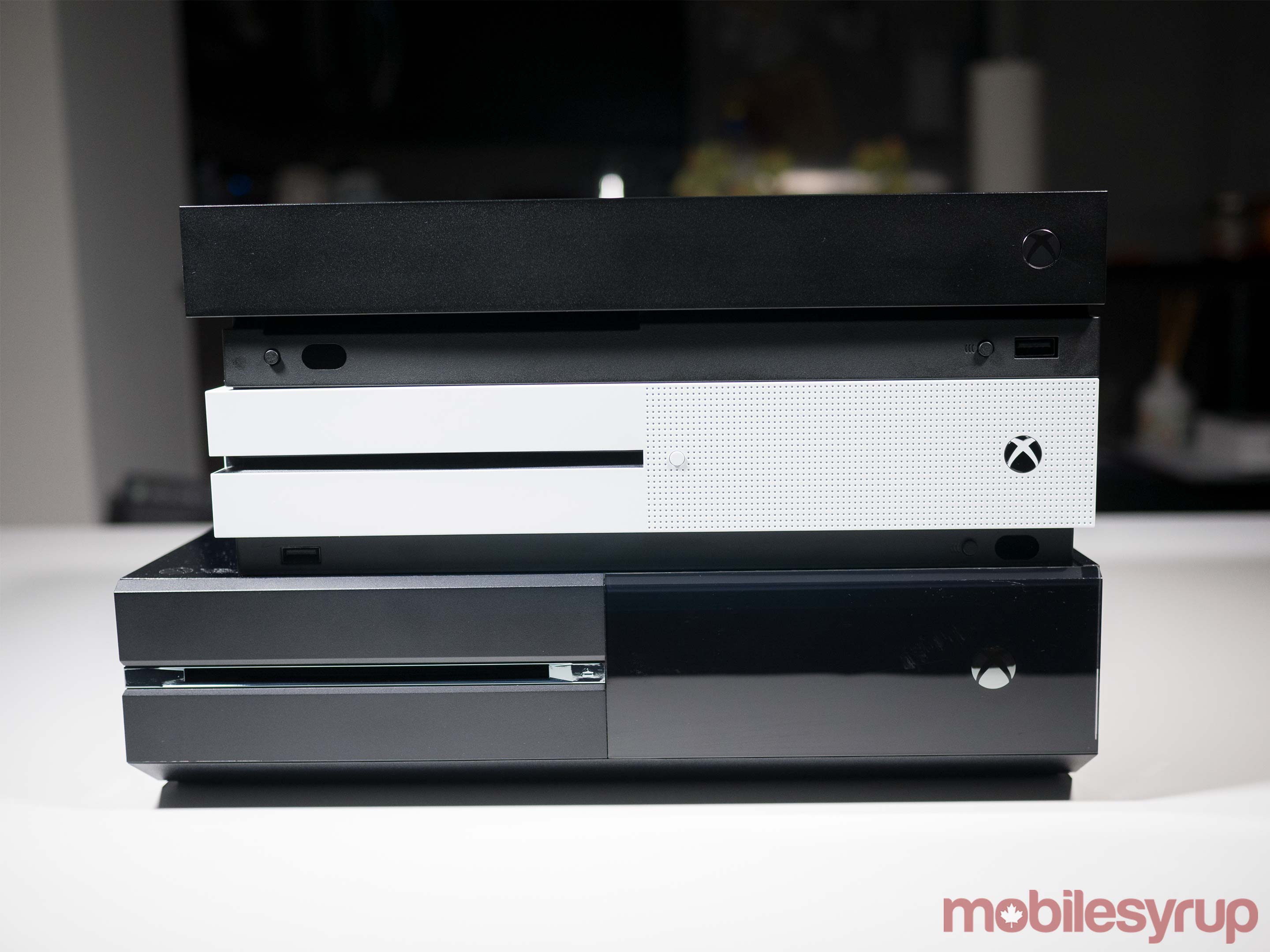 It’s also worth noting that some manufacturers, like Samsung and LG, actually refer to HDR10 as ‘HDR Pro,’ so don’t be concerned if you don’t see the HDR10 branding directly stated on a TV’s features and specifications. For what it’s worth, I now have the Samsung MU6300 which supports 4K and HDR10, and it works perfectly, producing beautiful picture quality when using the Xbox One X. Likewise, MobileSyrup senior editor Patrick O’Rourke — who handled our Xbox One X review — used the Vizio M50-E1 50-inch 4K TV to similar success, though his television supports both HDR10 and Dolby Vision.

Naturally, the size and price range of the TV will vary depending on the person, but regardless, you’ll need a screen that supports both 4K and HDR10 if you want the full Xbox One X experience. Once you do settle on a TV, the Xbox One X also has a feature to ‘calibrate’ the TV, with a helpful guide offering suggestions on optimal settings for brightness, contrast, colour and more.

However, even if you don’t have a 4K TV, your standard high-definition TV will still benefit to a degree from the power of the Xbox One X. Using a technique known as super-sampling, the console will scale down 4K output to 1080p resolution, which reduces jagged edges on textures and make the overall picture appear sharper. The Xbox One X also features several improvements independent of whichever TV may be connected, such as improved load times, greater draw distances and stronger special effects.

In the end, you’ll get a better experience with Xbox One X regardless of which type of TV you use, but naturally, a proper 4K, HDR10-enabled TV is the only way to get the most out of the console.

Which games are enhanced by the Xbox One X? 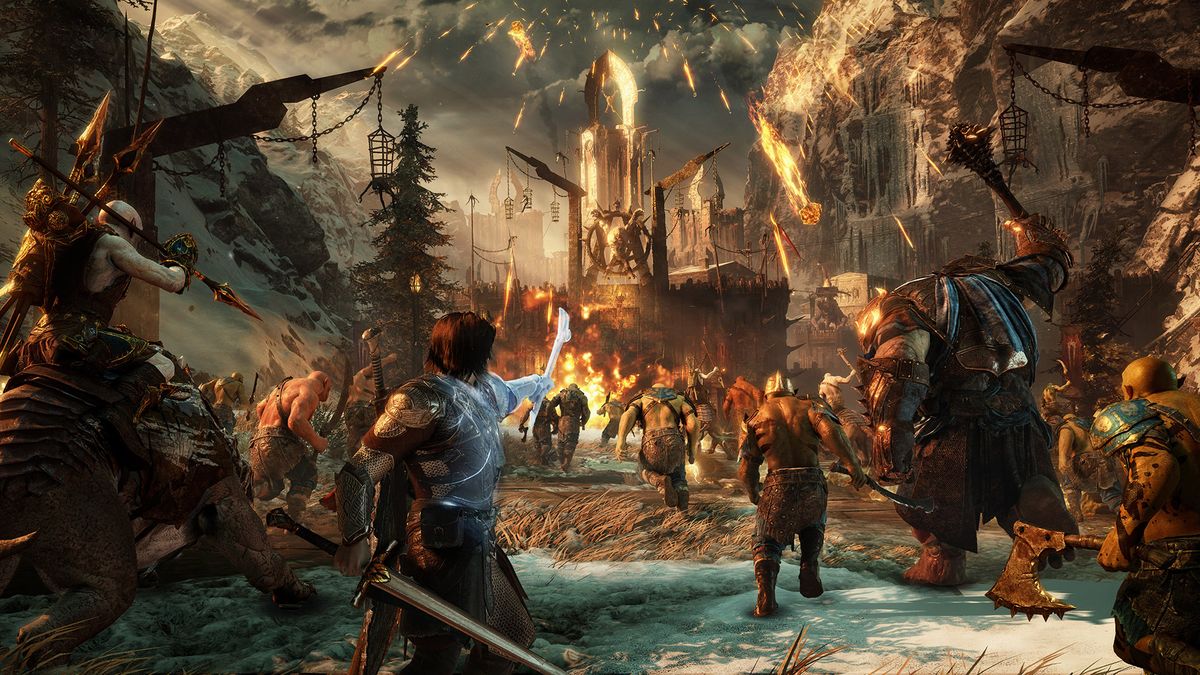 There are currently over 130 confirmed Xbox One X Enhanced games, nearly double that of main competitor PlayStation 4 Pro, which sits at about 70 enhanced titles one year after release.

Below are some of the major publishers that have pledged support for the Xbox One X, along with some of the games that will be enhanced:

At launch, over 50 games are currently Xbox One X Enhanced, including Shadow of War, Call of Duty WWII and FIFA 18, with more updates to come in the months ahead.

Outside of the list on the website, you’ll be able to know which games are enhanced through a dedicated section on the digital Xbox store or ‘Xbox One X Enhanced’ branding on the cover of physical titles.

That said, not every game will be displayed in true 4K. Some games will reach an approximation of 4K visuals through an upscaling technique called checkerboarding. While the differences between checkerboard and native 4K are arguably negligible to most, it’s still an important distinction to make when classifying what is and isn’t “true” 4K resolution.

Below is a video from Digital Foundry, which specializes in game technology and other hardware, and often runs performance tests on all kinds of games. In the footage, you can see what Gears of War 4 looks like running in native 4K HDR on the Xbox One X.

Keep in mind, though, that not every game will be updated in the same way, with the enhancements varying depending on the publisher. For example, Middle-earth: Shadow of War is the leading recent release third-party game in terms of Xbox One X support, offering true native 4K HDR and a slew of other improvements, including enhanced lighting and greater detail on the skin of enemy orcs. On the other hand, games such as Resident Evil 7: Biohazard and Ghost Recon: Wildlands are only getting an HDR update in the future.

Similar to the PlayStation 4 Pro’s ‘Boost Mode,’ some games will also give you the option to choose which enhancements you want to take advantage of. Rise of the Tomb Raider, for instance, offers three possible visual modes: Native 4K (full 3840 x 2160 pixels), Enhanced Visuals and High Frame Rate. The first option is clear enough, outputting in native 4K resolution and 30 frames-per-second (fps). Enhanced Visuals, meanwhile, doesn’t quite reach true 4K, but instead improves other visual and technical elements such as lighting and foliage. Finally, High Frame Rate prioritizes framerate to offer a consistent 60fps experience, with resolution capped at 1080p.

With all that said, it’s worth noting that the Microsoft’s official table of Enhanced games doesn’t actually include release windows for each individual update. Instead, a broad ‘Available Now,’ ‘Coming Soon’ or ‘In Development’ message is placed beside each game listed on the site. Therefore, currently unclear how long you may have to wait for your favourite games to get updated.

For example, The Witcher 3: Wild Hunt only just received its 4K PlayStation 4 Pro update in early October, nearly one year after the system first launched. The Witcher 3 will also be updated on the Xbox One X to deliver 4K visuals, but because no time frame for this update was specified, it’s not clear if this upgrade should be expected to take a similarly long time to arrive on Xbox One X.

Likewise, the official Enhanced games list, which Microsoft says is updated daily, hasn’t always reflected which games currently have their Enhanced updates. Microsoft has confirmed it’s “working to resolve the issue,” so hopefully this is all ironed out during launch week.

Note: The Xbox One X features a filter in the ‘My Games and Apps’ to show you which of your current titles are enhanced by the upgraded console. However, in our pre-release time with the system, Patrick and I both experienced some issues with this option. Certain games, such as Assassin’s Creed Origins and Call of Duty WWII would not show up in this filter, despite being two of the prominent third-party Enhanced games. 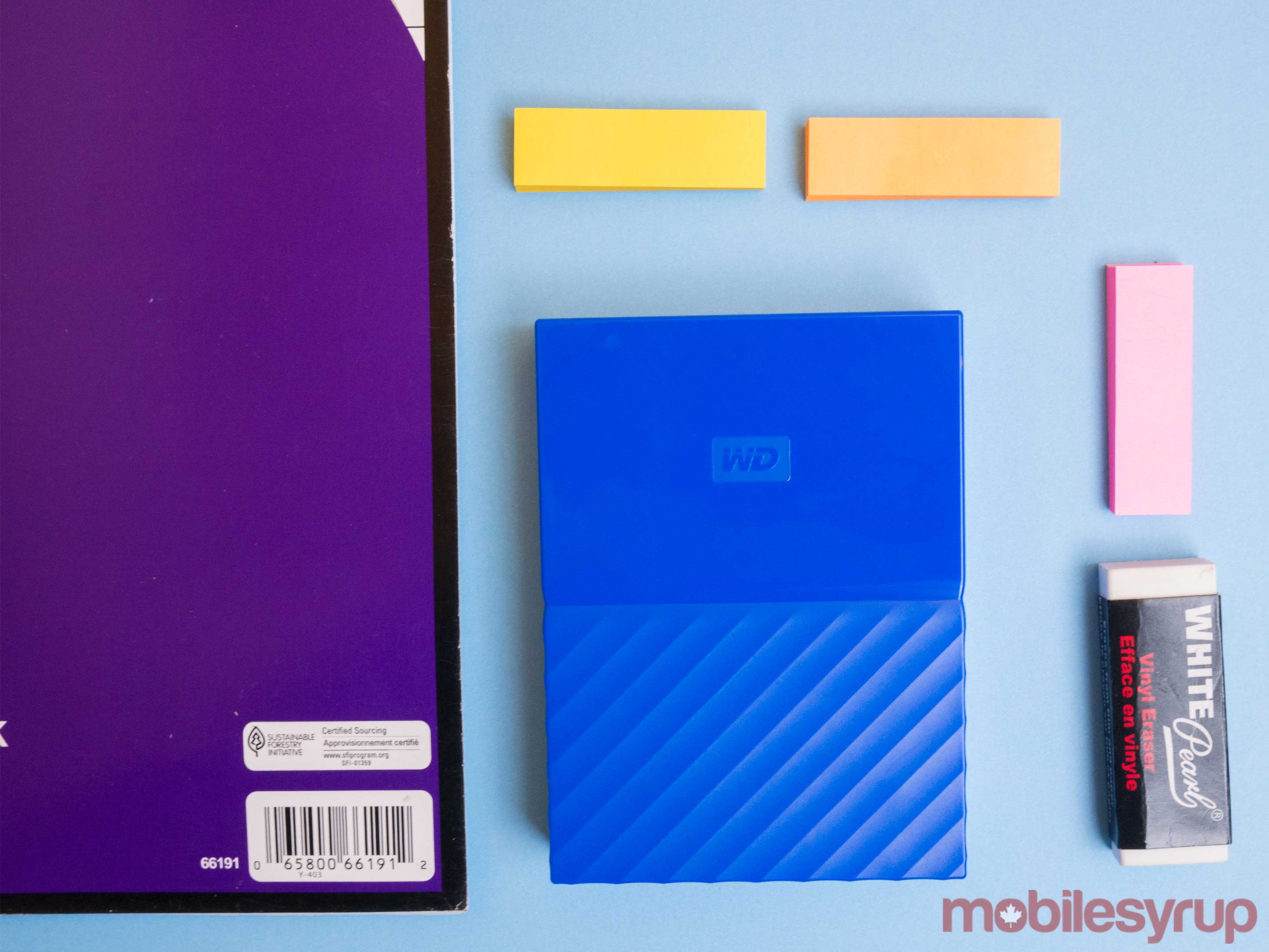 Games on the Xbox One X are more complex than ever thanks to all of the technical upgrades being made to them. As a result, many of them will take up significantly more space on your Xbox One X’s 1TB hard drive.

For example, Remedy’s Quantum Break, which is exclusive to Xbox One and PC, comes in at a whopping 178GB for all of the base game content and various updates, including the 4K patch.

To be fair, Quantum Break is clearly a more extreme case, given its unique position of including multiple live-action TV episodes with a full video game experience, but regardless, Xbox One X games will take up a great deal of space.

Therefore, you’ll likely want to invest in a external hard drive at some point down the line, even if you don’t play a lot of digital games. Microsoft officially licenses

If you’re upgrading from Xbox One to Xbox One X, you can make the setup process more easy by transferring games and their updates (including any that have already received their Enhanced patches) to an external hard drive. Once you have the Xbox One X, it’s as simple as plugging in the drive and playing content straight off of it.

Games and apps can also be carried over your home network from one console to another via  network transfer.

If you’re upgrading and haven’t used the Xbox One in a while, note that the major Fall update recently took effect, which gave the user interface a complete overhaul. A breakdown of the changes can be found here.